One of the Democrats who was hoping to challenge U.S. Sen. Cory Gardner is accusing the the leading Republican Senate super PAC of making illegal, in-kind contributions to Gardner by paying for fundraising efforts for his re-election campaign, Colorado Politics has learned.

Dan Baer, who ended his Senate campaign in September after former Colorado Gov. John Hickenlooper joined the primary, charged in a complaint filed with the Federal Election Commission that the Senate Leadership Fund has been spending to encourage donors to contribute to Gardner's campaign, which Baer argues violates a prohibition on coordination between candidates and super PACS that support them.

In the complaint, filed March 11, Baer is also alleging that SLF hasn't reported what amounts to an in-kind contribution to Gardner's campaign and is funneling corporate contributions that it can accept to a federal candidate, who can't.

A spokesman for the GOP group told Colorado Politics that SLF is confident the group has stayed within the lines.

“This is a frivolous complaint filed by a liberal interest group in Washington," Jack Pandol, SLF's communications director, said in an email.

"We are confident that the activity by SLF is well within the law and constitutionally protected independent activity. All SLF independent expenditure activity has been duly reported to the FEC as required by law."

Baer said in the complaint that a friend received a text message solicitation from SLF ahead of President Donald Trump's Feb. 22 campaign rally in Colorado Springs, where the president brought Gardner on stage and exhorted the crowd to "help us get Cory Gardner across that line because he’s been with us 100%."

The text message linked to a donation page on the Republicans' WinRed fundraising platform urging visitors to "stand with Cory and protect the Republican Senate majority!"

Further down, the page states: "Paid for by Senate Leadership Fund. Not authorized by any candidate or candidates committee." 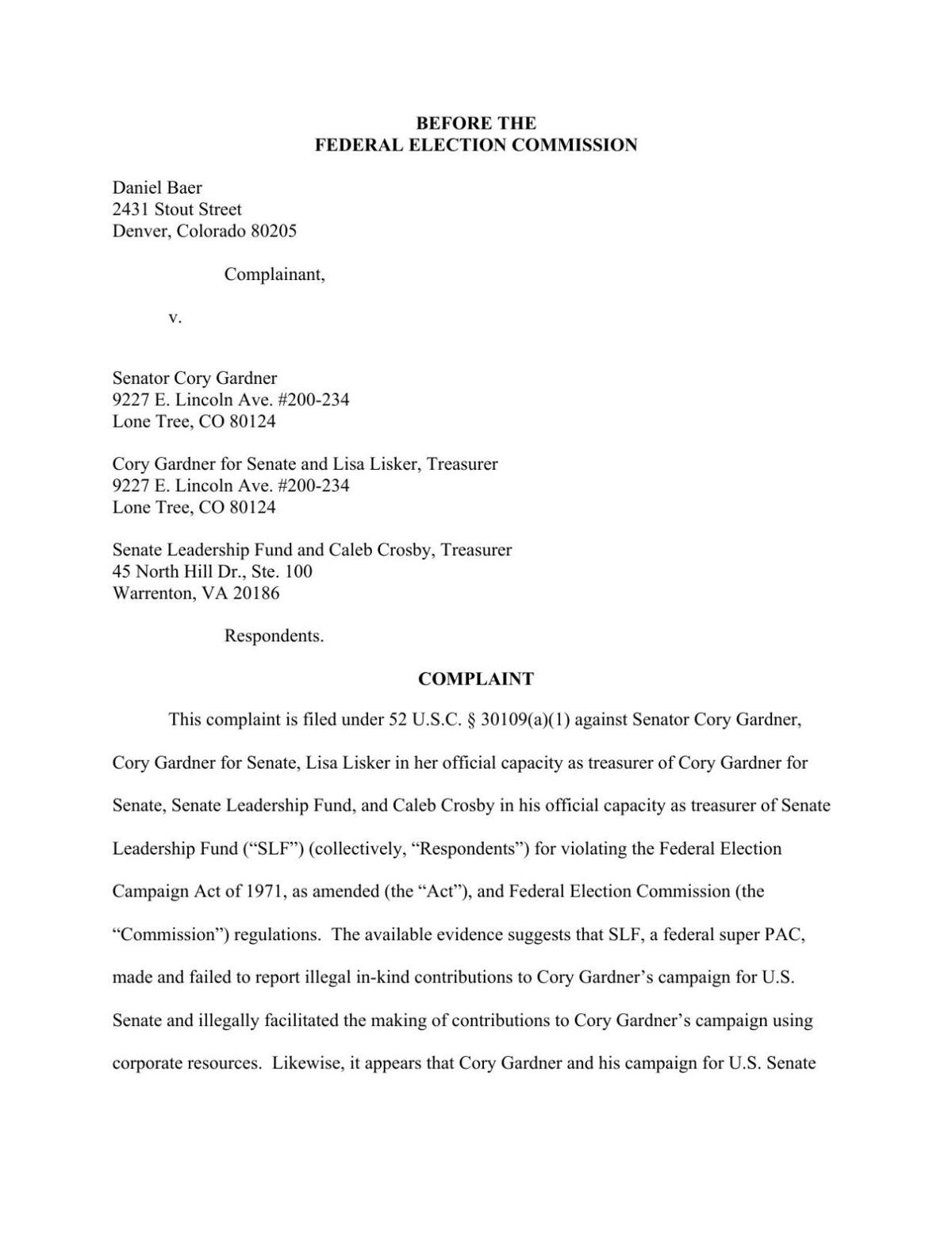 The SLF is paying for at least one other WinRed fundraising page soliciting donations for Gardner and four other Republican senators up for election in November, including Senate Majority Leader Mitch McConnell of Kentucky and U.S. Sens. Joni Ernst of Iowa, Martha McSally of Arizona and Thom Tillis of North Carolina.

"Our Senate Republican Majority is under attack," the page reads. "Donate today to help each of these key members of the Senate Firewall!"

"If you start letting super PACs pick up these expenses, do you let them pick up other fundraising expenses?" Baer said in an interview. "Where does it stop?"

He dismissed Pandol's suggestion that a "liberal interest group" had anything to do with the complaint, saying he became versed in campaign finance law during his Senate run and an earlier congressional campaign.

"One of the only prohibitions we maintain is a prohibition on corporate money donations to federal campaigns," Baer said. "I think you've got to stop these things when you see them."

His complaint also charged Gardner and his campaign treasurer with accepting illegal in-kind contributions from the super PAC.

"Will Cory Gardner give back the money, whatever money is raised through this illegal coordination contribution?" Baer asked. "I think it's very concerning that a guy who votes with Mitch McConnell 99% of the time is receiving what appears to be illegal assistance from Mitch McConnell's super PAC."

A spokeswoman for Gardner's campaign didn't respond to a request for comment.

Baer said he was moved to file the complaint when he was visiting Washington last month on a work-related trip.

"The driving thing for me is the corporate money," he said. "The cynicism, that the many times accurate sense that our elected leaders are bought and paid for by corporations — that cynicism is incredibly dangerous. Corporate contributions are allowed legally through super PACS; we shouldn't tolerate corporate money being used illegally."

A spokesman for the FEC confirmed to Colorado Politics that the complaint has been filed but noted that the commission can't comment on pending matters.

"However, as the agen­cy is currently operating without a working quorum, the Commission is unable to move forward on enforcement matters at this time," wrote Myles Martin, a public affairs specialist with the FEC.

The six-member commission hasn't had a quorum since August, when one member departed, leaving just three commissioners on the panel.

While the FEC continues to receive campaign finance reports — a quarterly report for federal candidates is due April 15 — its ability to investigate campaign finance violations and fine campaigns is on hold until the Senate confirms a fourth member.

Inside Elections, a nonpartisan publication from Nathan Gonzales, moved three of this year's 35 Senate contests in the Democrats' direction in its April edition, including the Colorado seat held by Republican U.S. Sen. Cory Gardner.