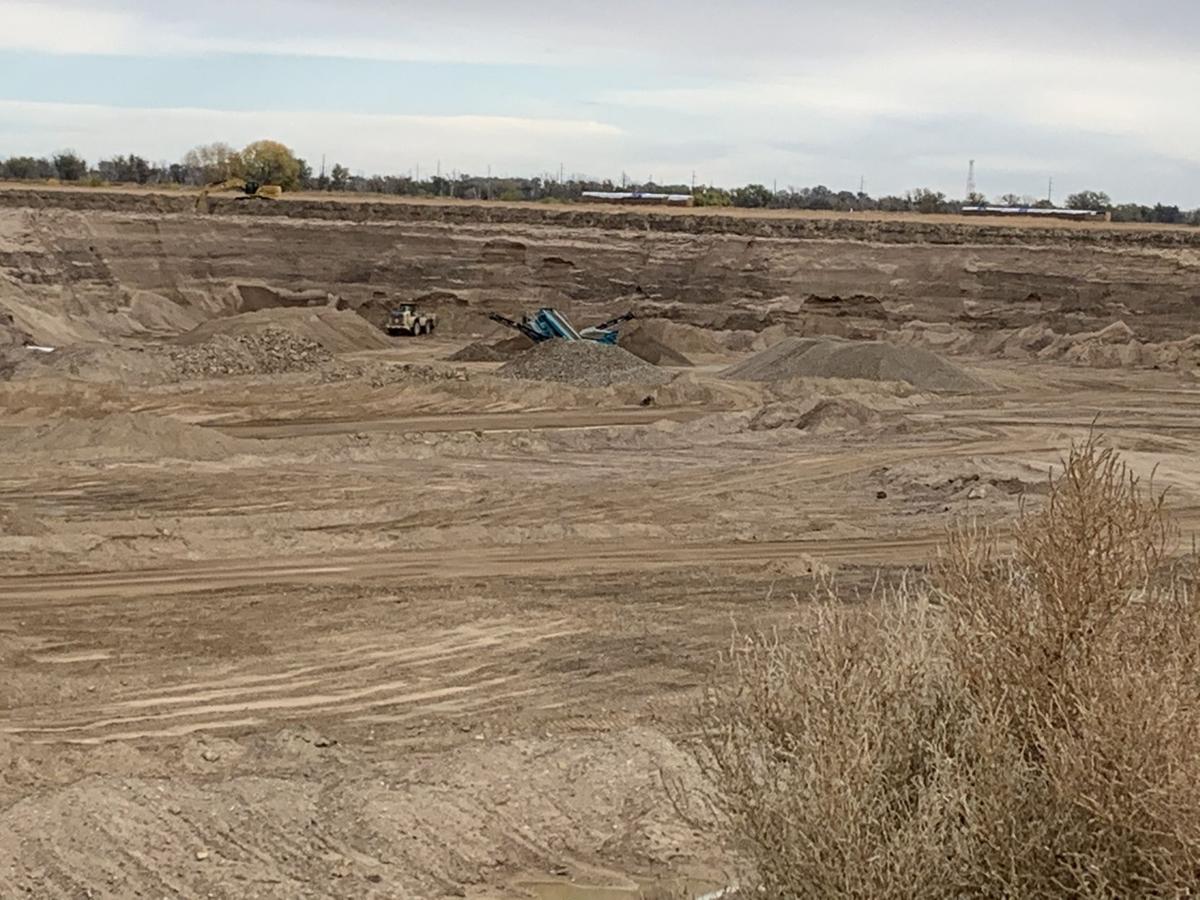 Part of the 80-acre gravel pit owned by Prowers Aggregate in Lamar. 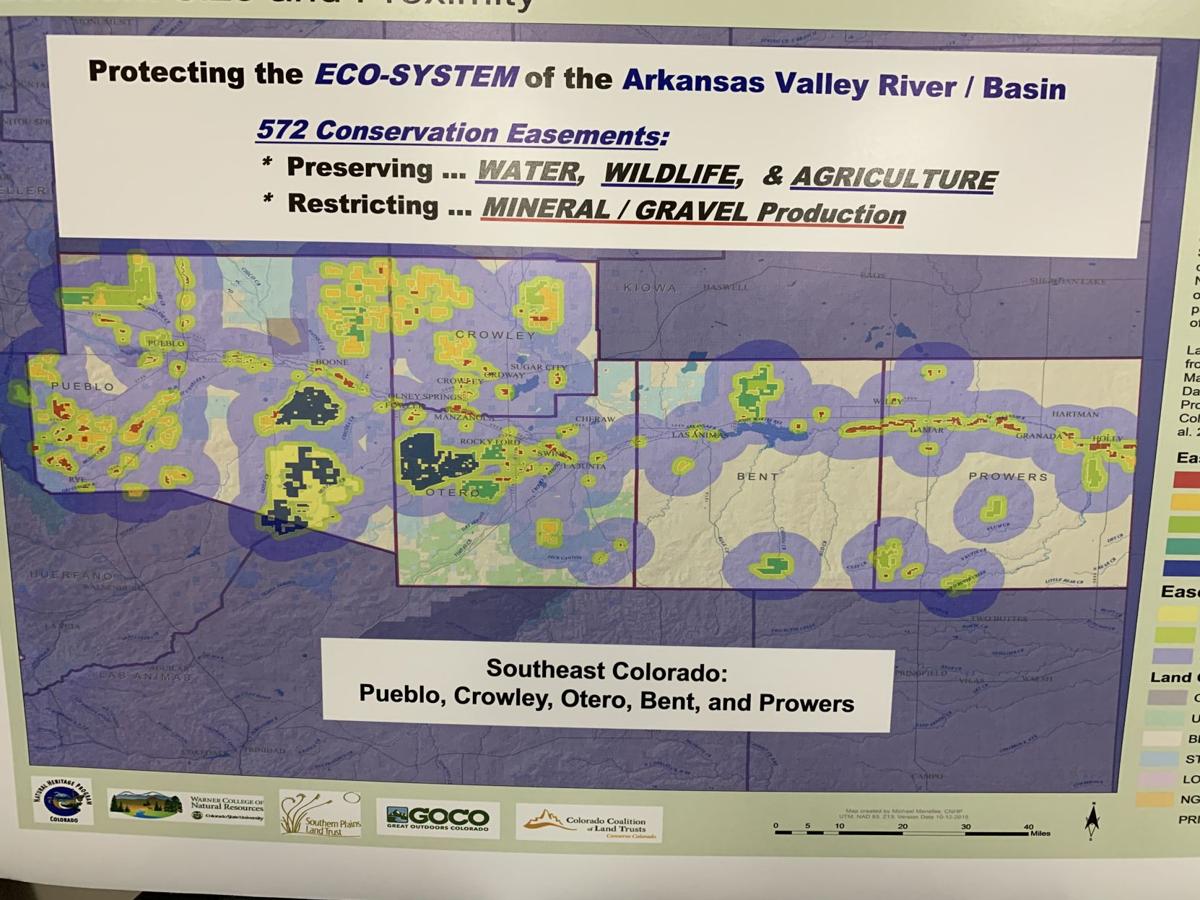 Conservation easements in five counties in southeastern Colorado. The purple color signifies easements within 5 miles of each other.

That's the question facing a working group that met for the first time Thursday in Lamar that must decide what to do about landowners who lost millions of dollars in tax credits from disallowed conservation easements. The group toured several properties in southeastern Colorado, which is consider a "hot spot" for easements that the Department of Revenue have said have zero value for conservation.

An easement works like this: a landowner either sells or donates development rights for property in the form of an easement to a government or nonprofit entity to preserve the land for its conservation value. The owner retains title to the land but the easement holder keeps the acreage from ever being developed. In the case of a donation of an easement, the landowner can be eligible for state tax credits and a federal tax deduction.

An easement is forever. Once granted, it passes on to the heirs of landowners who made the original easement agreement.

But the program, which has been in state law since 2000, has become a nightmare for hundreds of Colorado farmers and ranchers who claim the Colorado Department of Revenue disallowed their tax credits, claiming the lands they donated have no conservation value. It’s led to bankruptcies, divorces and foreclosures for those who have lost millions of dollars in tax credits plus penalties, interest and legal costs. Out of 4,200 easements granted, 860 were disallowed by state revenue officials between 2000 and 2013.

During the 2019 legislative session, lawmakers approved House Bill 19-1264, which set up the working group and tasked it with three duties: reparations for disallowed easements; how to deal with “orphan” easements, which are those taken over by a land trust that has gone out of business; and alternative valuation, or a new way to appraise land for conservation purposes.

Initially, the cost of reparations was projected at $270 million, but on Thursday a different, and much lower number, surfaced, at around $150 million, not including interest and penalties, which could raise that figure substantially. And given that in the last two to three years the state’s conservation easement program hasn’t been able to issue all the tax credits it’s allowed to, there may be a pool of money available -- possibly as much as $188 million -- to begin to cover those reparations, according to a member of the working group who represents tax credit brokers.

On Thursday, the working group began with a presentation from Nicole Rosmarino from the Southern Plains Land Trust on a 2015 study that covered conservation easements in five counties in the Lower Arkansas Valley: Bent, Crowley, Otero, Prowers and Pueblo.

Southeastern Colorado is the “hotspot of the conservation easement controversies,” Rosmarino told the working group. It’s also a “biological hotspot,” she said, an area well worth conserving because of the importance of natural resources in the region. That includes shortgrass prairie conservation.

It’s easy to see the value of a conservation easement for the millions of acres conserved on the Western Slope. It’s why people come to Colorado: for the state’s natural beauty, part of which is maintained through conservation easements that guarantee lands will be preserved forever.

It’s a little harder to see the value of an easement on open prairie, or on a farm or ranch on the Eastern Plains. But the answer may be in what it doesn’t become.

There are 572 easements covering nearly 350,000 acres in the five counties covered by the 2015 study. About 35% of the easements are in Prowers County, but by acreage the largest are in Pueblo County. Thirty-eight land trusts, nonprofits and government entities hold those easements.

All of the easements in the five counties are within 5 miles of each other; 91% are within a quarter-mile of another easement. Together, they form an almost continuous line from Pueblo to the Kansas state line.

Jiliane Hixson of Lamar, who owns a farm that includes easements with disallowed tax credits, puts it this way: These easements protect ecosystems, wildlife, water and agriculture. “If it were not for these easements, there would be a nonstop gravel pit from Pueblo to the Kansas border.”

Across the road from Hixson's farm is another property that includes a large conservation easement. The family, whom Hixson didn’t identify, initially platted the land for homes, given that the immediate area is dotted with five and ten-acre lots that include some of the highest-valued homes in the county.

But the owners were denied their tax credits from the state. That eventually forced them into bankruptcy and divorce, according to Hixson. They stopped paying the property taxes in 2007, and the county wants to put the land up for sale to recoup those taxes. But because of the easement, they can’t sell the land since the owners don’t have clear title to the portion contained in the easement.

During the afternoon, the working group focused on the three tasks before them and draft documents that will form the basis for the group’s recommendations to the General Assembly.

Those recommendations are due by Dec. 1 for potential legislation in the 2020 session.

CARLSBAD, N.M. — As things begin to dry out again in New Mexico, members of the arid state's congressional delegation are looking for ways to …

A congressional advisory panel is visiting Colorado State University this week to hold a forum on biological defense.

“Growing up on the Eastern Plains ... gave me a deep appreciation for agriculture and the organizations that work every day to help the industry thrive,” said Colorado's U.S. Sen. Cory Gardner, who is from Yuma.

A working group tasked with coming up with a way to pay back millions of dollars in tax credits to landowners got their first look at just how much that might cost.