The state’s Independent Ethics Commission has completed its investigation into a complaint lodged against Custer County’s public health director.

The complaint against Dr. Clifford Brown was filed last December by Jordan Hedburg, the publisher and editor of the Wet Mountain Tribune.

In his complaint, Hedburg said Brown, who holds a doctorate in optometry “fraudulently claimed that he also held a master’s degree in public health from Dartley University; that the MPH diploma is fake; and that Dartley is a ‘criminal and illegal online diploma mill.'”

The issue? According to the complaint, Brown is not qualified under state law to serve as a county public health director. The complaint added that the purpose of Brown’s deception was for “private financial gain of a government paycheck” and other benefits of the job.

State law and rules outlined by the Colorado Department of Public Health and Environment  state that a public health director can be a physician, public health nurse, or other qualified public health professional. Brown has never been licensed to practice optometry in Colorado, according to the state database maintained by the Department of Regulatory Agencies. And optometry is not a medical degree, according to the American Association for Pediatric Ophthalmology & Strabismus.

The CDPHE rules also apply to non-physician candidates. Under those rules, the candidate must have a master’s degree in a public health discipline; and must have spent five years out of the past ten as a public health administrator or in a closely related field, which is to include at least two years experience in supervising public health professionals.

Brown, in his response to the complaint, noted that a public health director can be an “other qualified health professional.” He said the statutory requirement does not mention the MPH, and that Brown did not rely on his MPH to qualify him for the position.

But Brown also said, as reported by the investigation, that he could not vouch for Dartley University, where he alleged he got his public health degree. Brown said he took two years of online classes, including online tests, and received the MPH in 2008. He told the ethics commission investigator that “the MPH program at Dartley did not include written academic materials; there were no written exams and there were no written substantive class materials. Rather, substantive activities at Dartley were all oral, including phone calls and exams. There were no class lectures. Exams were conducted by four examiners. Respondent does not remember examiners’ names or qualifications.”

The degree Brown submitted for the ethics investigation and as contained in the investigation report is faint and poorly copied. All of the signatures are illegible. The transcript is also poorly copied and barely legible, and is signed by a "Phillip Samuels, Registrar" but is undated and does not have a university seal that would verify its authenticity, which is standard industry practice.

The ethics investigation, despite having a copy of Brown’s degree, did not notice that Brown had an MSPH, and referred to his degree as an MPH throughout the report.

The master of science degree is an intermediary research-based academic degree for those who intend to continue on to the doctorate in public health and want to become educators or researchers in public health. Out of the 318 accredited colleges and universities that offer online public health degrees, only two offer the MSPH. The MSPH also requires a thesis, but none is listed on Brown's alleged transcript.

The investigation also noted what appeared to be a lack of concern by CDPHE about Brown’s qualifications. Michele Shimomura, director of the office of public health practice, planning and local partnerships, told the investigator that the county did not appear to submit, within 30 days of hire, a required minimum qualifications review form for local public health directors. Shimomura, who was hired in October 2020, said she could not confirm whether that form was ever submitted, citing email problems.

Brown was hired in July 2020. The form showed up at CDPHE in April 2021, according to the report.

The ethics commission is scheduled to meet on Oct. 19; the investigation report could be publicly released at that time. The next step is a formal hearing; according to Hedburg, that's set for Jan. 18, 2022. 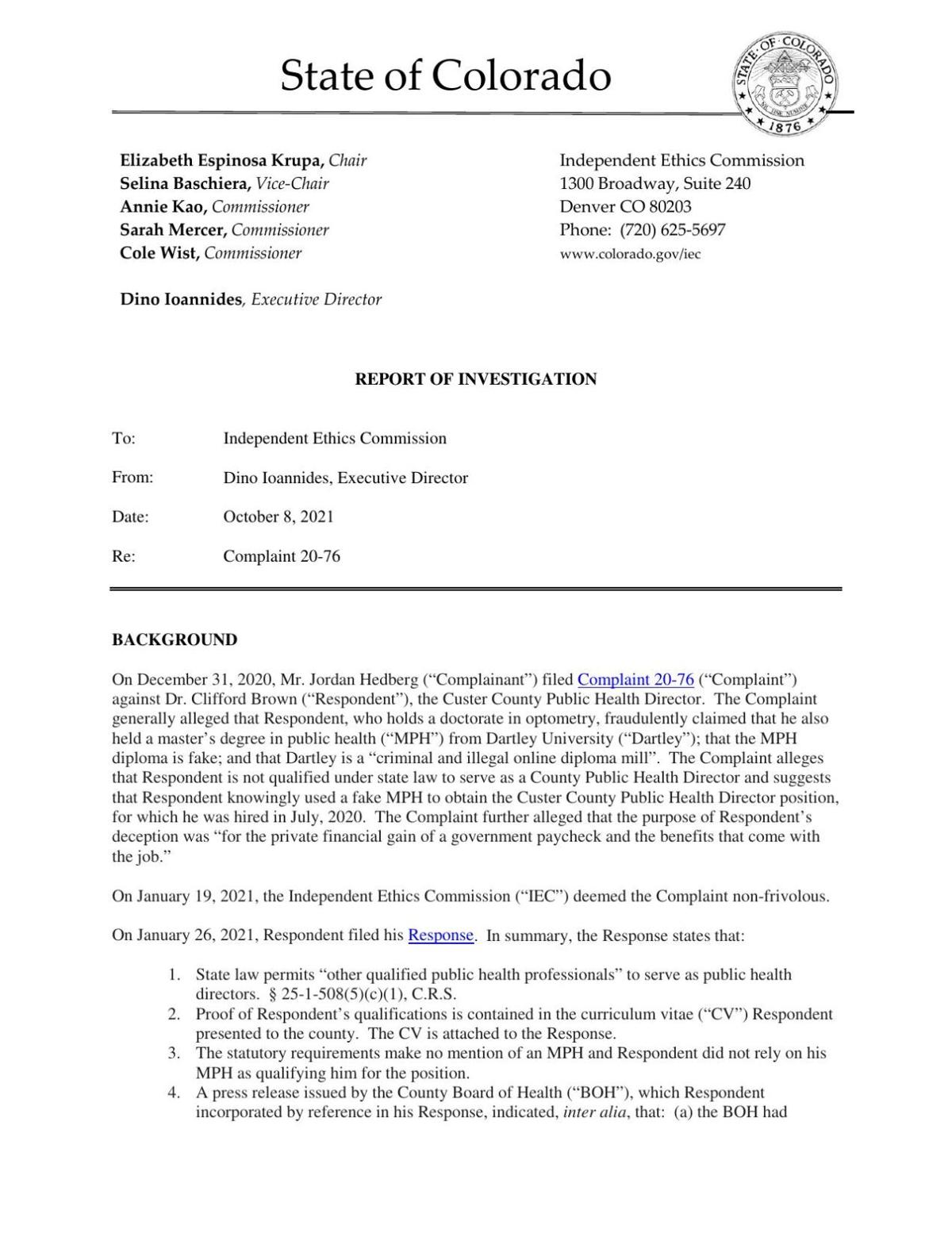 Bill to separate county commissioners and boards of public health advances, but with less power to enforce

"We're trying to get politics out of public health."

Custer County in standoff with state over COVID-19 restrictions

A battle over COVID-19 restrictions in Custer County grew a little hotter when commissioners, acting in their capacity as the county board of …