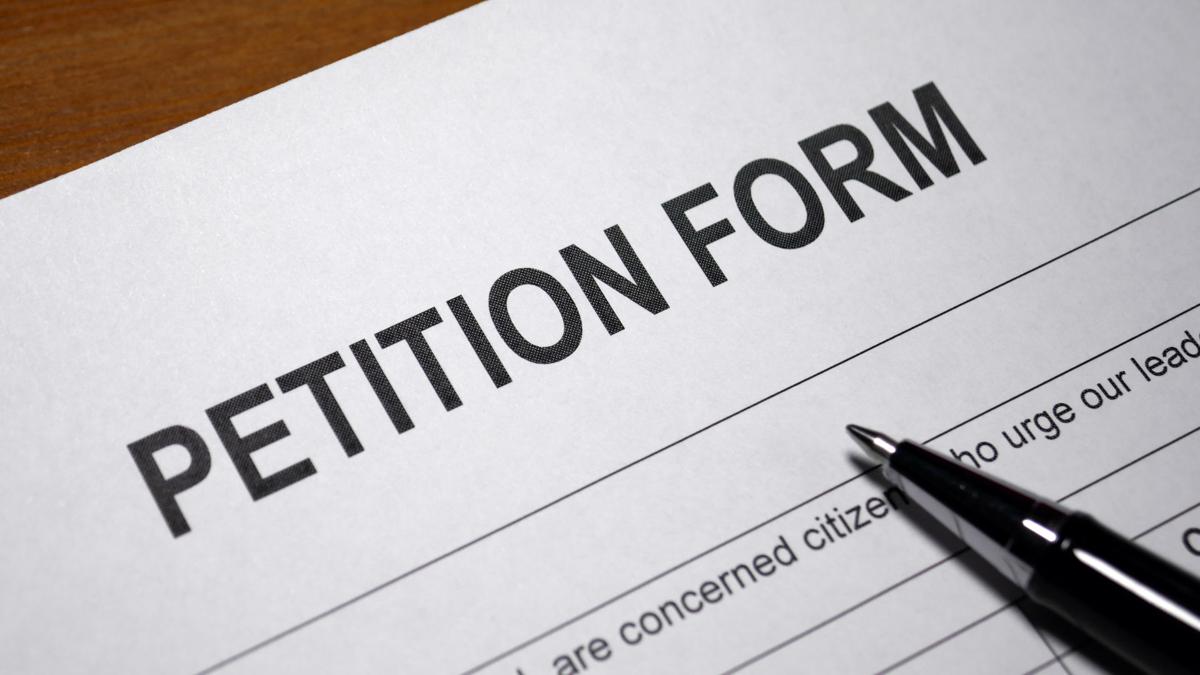 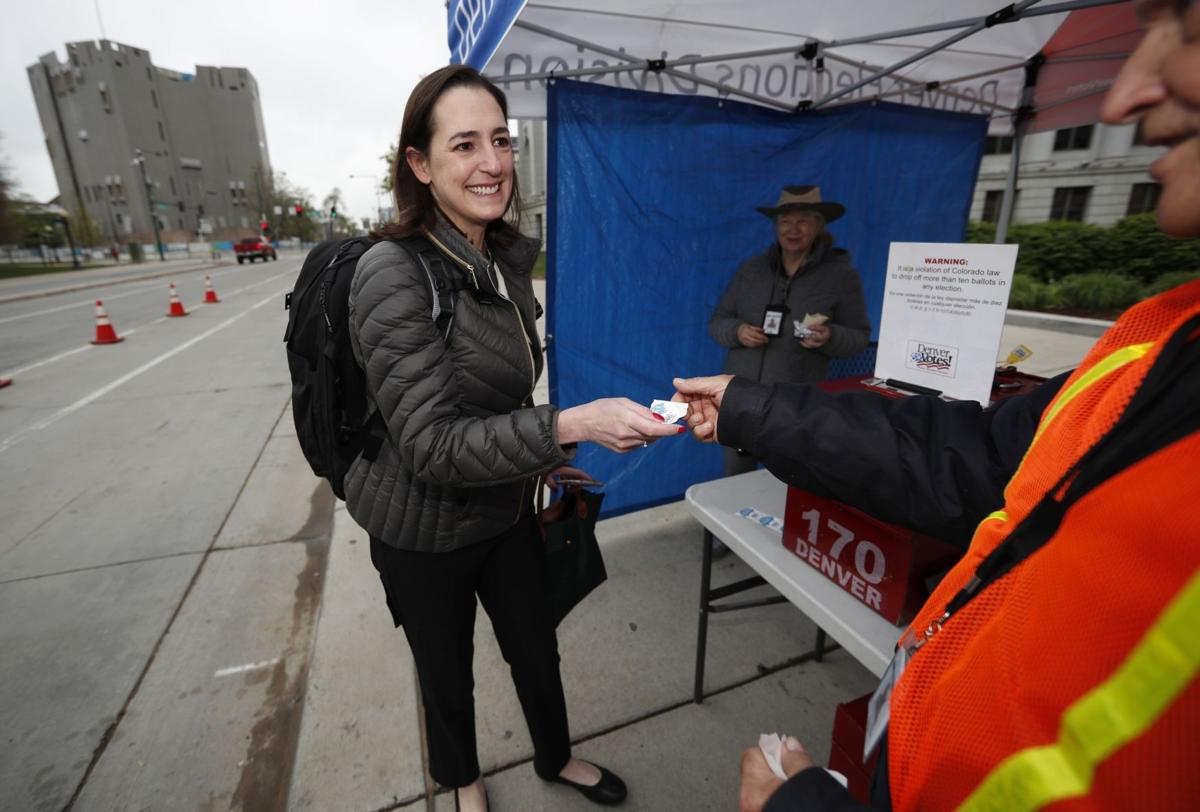 Nilufer Saltuk of Denver smiles as she gets a sticker for dropping off her ballot at the Denver Electoral Commission Tuesday, May 7, 2019, in Denver. Voters could make Denver the first U.S. city to decriminalize the use of psilocybin, the psychoactive substance in "magic mushrooms" if the measure passes. (AP Photo/David Zalubowski)

Nilufer Saltuk of Denver smiles as she gets a sticker for dropping off her ballot at the Denver Electoral Commission Tuesday, May 7, 2019, in Denver. Voters could make Denver the first U.S. city to decriminalize the use of psilocybin, the psychoactive substance in "magic mushrooms" if the measure passes. (AP Photo/David Zalubowski)

Ideologically tempting ballot measures can lure like-minded voters to turn out for a general election, but that's a difficult proposition this November. As University of Denver pollster Floyd Ciruli said recently, there’s something on the ballot for everybody this year.

As a result, it's a wash for either side to think a particular ballot question would drive turnout in their candidates' favor. Voter turnout in Colorado is likely to be record-setting, regardless, Ciruli said.

All fundraising totals are as of July 27, the end of the most recent reporting period.

All proposition measures will require a 50% plus one vote to pass. Amendments will require 55% voter approval to pass, except for Amendment B, which will need 50% plus one, since that was the law at the time the amendment was adopted.

This is the first time citizens have tried to overturn a law passed by the General Assembly since 1932.

What it does: Repeals Senate Bill 42, passed in 2019 to put Colorado into the effort to mandate that Electoral College votes would go to the nationwide winner of the popular vote. So far, 15 states and the District of Columbia, with a total of 196 electoral votes, have signed on. Should the campaign reach 270 electoral votes -- the winning number required for a presidential contender -- the law would go into effect, according to Yes on National Popular Vote.

What your vote means: A “yes” vote confirms the General Assembly’s action; a “no” vote repeals the law.

The “no” side has raised $457,530. It has the backing of stalwart Republicans, such as Larry Mizel of MDC Holdings, former CU President and gubernatorial candidate Bruce Benson and beer magnate Pete Coors. Values First Colorado, the committee that raises money to help elect Republicans to the state House, also paid $5,500 for petition signature gathering.

What it does: asks voters to allow the reintroduce of gray wolves west of the Continental Divide. The Colorado Parks and Wildlife Commission would come up with a plan to restore and manage the wolves, and “fairly compensate” livestock owners for losses  at taxpayer's expense.

Fundraising: Coloradans Protecting Wildlife, with lots of financial support from Farm Bureau chapters and cattlemen’s groups, has raised $340,740. Stop the Wolf has taken in $47,878, mostly from the Grand Junction-based Stop the Wolf Coalition, which does not disclose its donors.

The Rocky Mountain Wolf Fund has received $1.67 million in contributions. Among its largest donors: a self-titled dark money group that doesn’t disclose its donors and Defenders of Wildlife. The committee’s biggest contributions come from out-of-state organizations. The Colorado Sierra Club also makes its contributions directly to the Wolf Fund; as of July 26 the club and its affiliates have given $31,678.

What it does: prohibits abortions after 22 weeks. Exceptions are allowed to save the life of the woman but no exceptions for pregnancies resulting from rape or incest. Voters have resoundingly rejected three previous attempts to end abortion in 2008, 2010 and 2014.

Who’s in favor: the Catholic Church, the Coalition for Women and Children, Alliance for Life, Coalition to Help Moms and Save Babies, and End Birthday Abortions Colorado.

Those who favor the measure raised $110,179, most of it through the Coalition for Women and Children.

Who’s in favor: Republican State Sen. Jerry Sonnenberg of Sterling sponsored bills in the 2019 and 2020 session to do the same thing, but those measures got axed by Senate Democrats. Sonnenberg had hoped to get support from Gov. Jared Polis, who has voice support for an income tax rate reduction, both on the campaign trail and in his first two State of the State addresses. Also in support: the Independence Institute’s Jon Caldara, Americans for Prosperity and the committee Energize Our Economy.

What it does: asks voters to approve fees for new state-based enterprises. An enterprise is a state-owned business, such as what’s proposed for the paid family leave ballot measure. Republicans have complained for years (as well as in the courts) that requiring new fees is a work-around against the Taxpayer's Bill of Rights, which requires voter approval for taxes. This would put fees in the same category.

What it does: sets up a state-run enterprise through the Colorado Department of Labor and Employment that would provide up to 12 weeks paid leave.

Who’s against: Not Now Colorado, which is backed by the Denver Metro Chamber of Commerce.

Fundraising: Colorado Families First has raised $3.389 million, with its largest donations from the Sixteen Thirty Fund, a left-leaning dark money group from Washington, D.C. that has taken a substantial interest in Colorado politics in the past eight years, with more than $14 million in contributions to left-leaning committees.

Sixteen Thirty has put $2.8 million into the pro-paid family leave committee. Working Families has raised $50,000 from its national organization in New York, which doesn’t disclose its donors. However, Open Secrets says its largest donors are unions and several dark money groups, including Way to Win Action Fund and the Green Advocacy Fund, which advocates for renewable energy.

Not Now has just one contribution reported as of July 25, a $25,000 donation from the chamber.

Who’s in favor: Colorado Citizen Voters. Contributions totaling $1.43 million come from its national 501(c)4, which does not disclose donors. The Washington Post reported in 2019 that its backers have close ties to the Trump campaign, including members of Trump’s Mar-A-Lago club.

In Colorado, the measure is backed by Republicans such as former state Rep. Joe Stengel and George Athanasopoulos.

Who’s against: None so far

What it does: Gives voters in Central City, Black Hawk and Cripple Creek the right to approve a maximum single bet of any amount, and to approve new casino games in each city. The amendment does not eliminate the limits; it gives residents in the towns the option to hold a local election instead of putting the decisions up to a statewide vote.

Who’s in favor: Local Choice Colorado, which has raised $2.25 million, mostly from casinos and betting organizations.

Who’s against: None so far.

What it does: repeals the 1988-voter approved Gallagher Amendment, which sets a property tax ratio of 55% on commercial and 45% on residential. Critics claim because of rising residential property values, it has lowered the amount of property taxes for K-12 education and other property tax-funded services, such as fire, police, water and hospitals.

Who’s in favor: the Colorado General Assembly, which passed the resolution on a 51-14 vote in the House and 28-6 in the Senate (it required a two-thirds vote in each chamber to make it to the ballot). Colorado Coming Together, which registered as an issue committee on July 23, also backs the measure.

Who’s against: Protect Our Homes Colorado and Keep Property Taxes Low, neither of which has reported any contributions.

What it does: allows those with bingo-raffle licenses to “hire managers and operators of games” as well as reduce the requirement that a charity be in operation for five years before obtaining a charitable gaming license.

Who’s in favor: Colorado Charitable Bingo Association, which has not yet registered a campaign committee .

Who’s opposed: None so far

What it does: increases the taxes on nicotine and vaping products, to raise $294 million annually. The money would go to public education.

Who’s in favor: A Brighter, Healthier Future for Colorado’s Kids, which has so far raised $756,027, largely from Education Reform Now Advocacy, the fundraising side of Democrats for Education Reform; and Gary Community Investment.

Who’s against: None so far.

This article has been updated to correct the intent of Amendment 77.

The Colorado Chamber of Commerce has decided to oppose a ballot initiative to establish a paid family and medical leave program through premiums on employers and employees’ wages.

Colorado voters will decide in November whether Cripple Creek, Central City and Black Hawk should be allowed to vote on approving new betting limits and more games in their respective jurisdiction.

The Secretary of State's office on Monday announced that Initiative 306, on a reduction in the state income tax rate, has qualified for the November ballot.

Suggesting there's no middle ground on abortion, a new national scorecard around the issue gives all of Colorado's Republicans in Congress perfect A's and all the Democrats got flat F's.

Defenders of Wildlife planning program about living among predators

Defenders of Wildlife is putting the management before the wolves, announcing this week it's expanding its Working Circle Initiative to Colorado.

Proponents call it an "essential benefit," but skeptics worry that it will inflict troublesome costs on small businesses and eventually wind up costing all taxpayers.

Joey Bunch: "Coloradans face one question with two choices on Nov. 3. Do we give our votes to California, or do we hand them over to Alabama?"

The guy who sang "Cat Scratch Fever" is asking Coloradans to scratch in the "No" oval on their ballot about wolves.