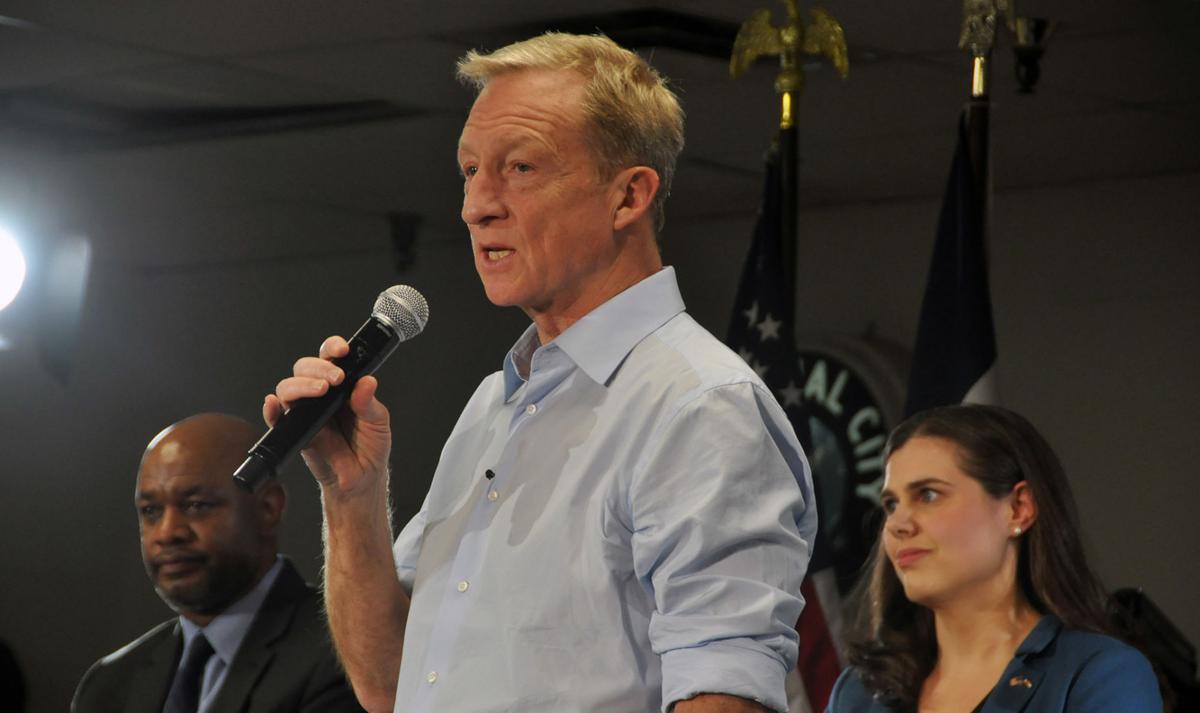 Democratic presidential candidate Tom Steyer answers questions at a joint town hall held with Colorado Secretary of State Jena Griswold, right, and moderated by Omar Montgomery, president of the Aurora branch of the NAACP, left, at a union hall in Denver on Sunday, Dec. 29, 2019. 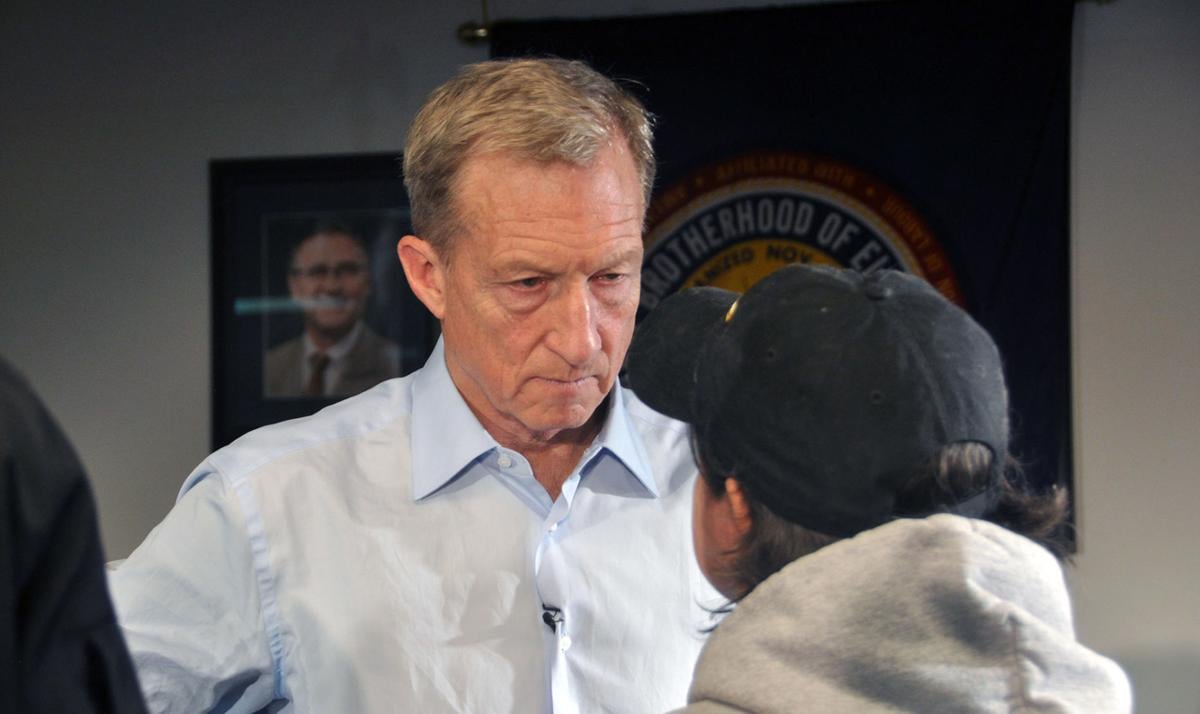 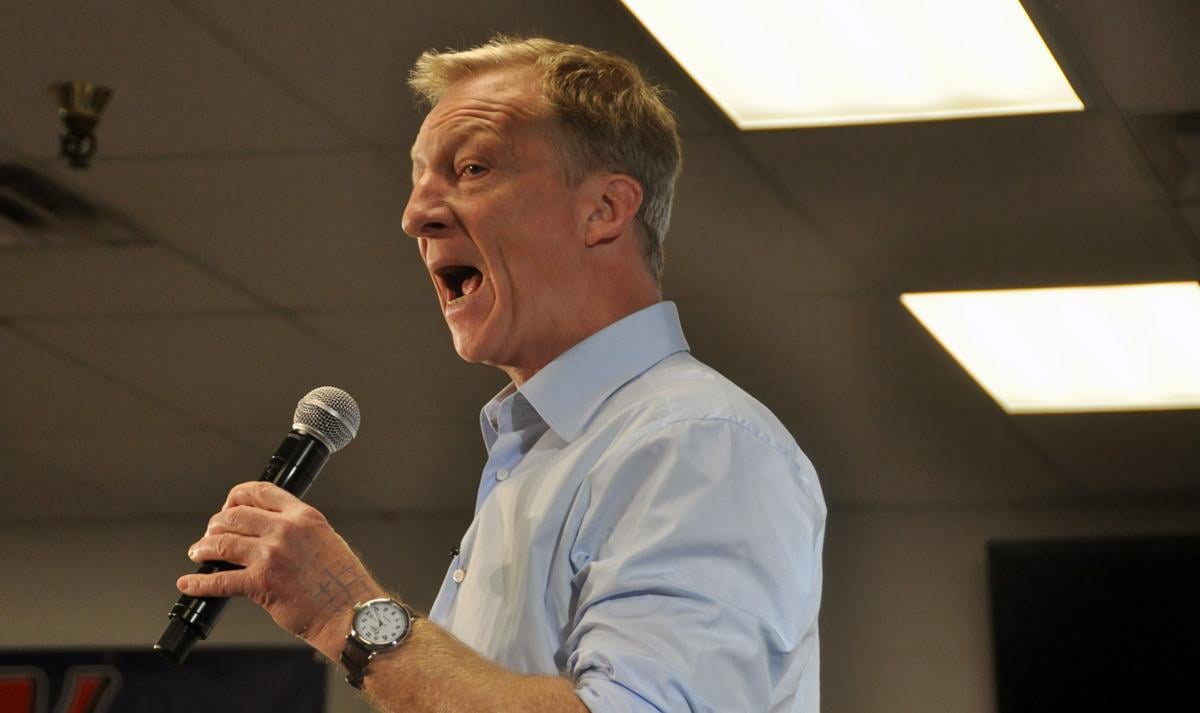 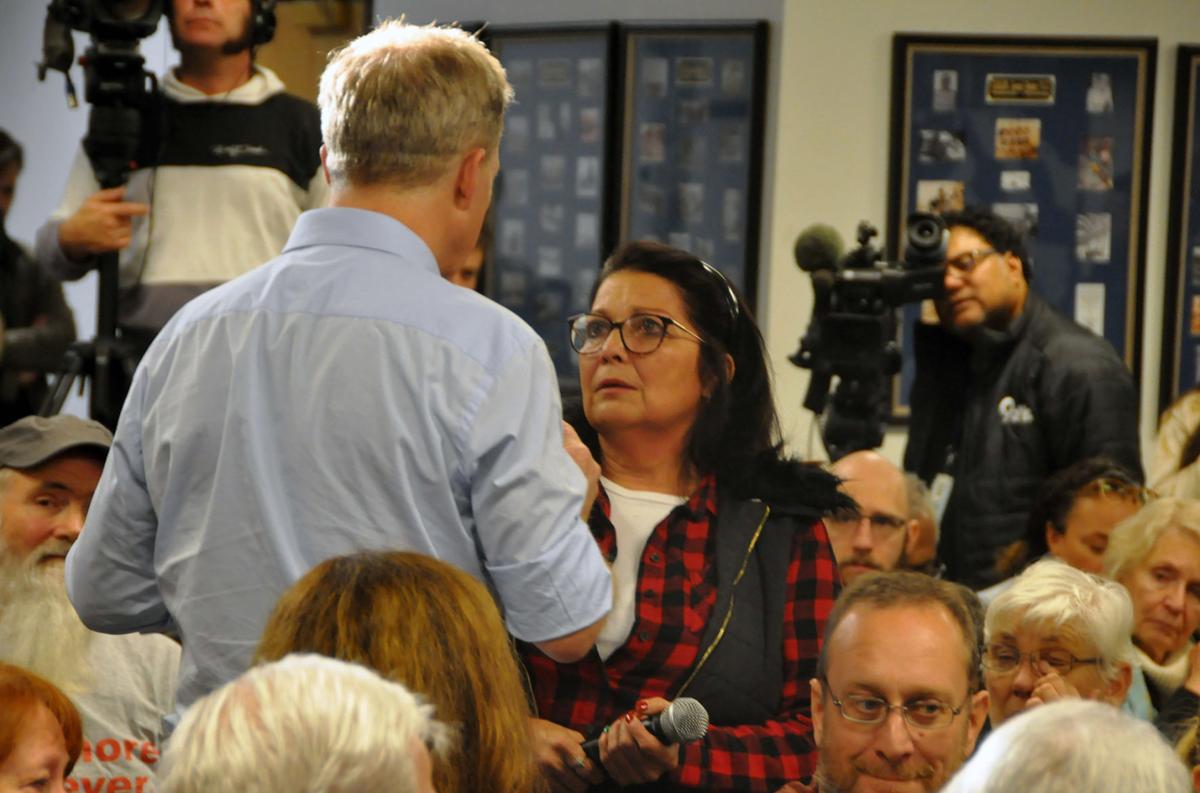 Democratic presidential candidate Tom Steyer, left, speaks with Elizabeth Emerson, whose son was killed by a gunman in Arapahoe County in 2018, at a joint town hall held with Colorado Secretary of State Jena Griswold in Denver on Sunday, Dec. 29, 2019. 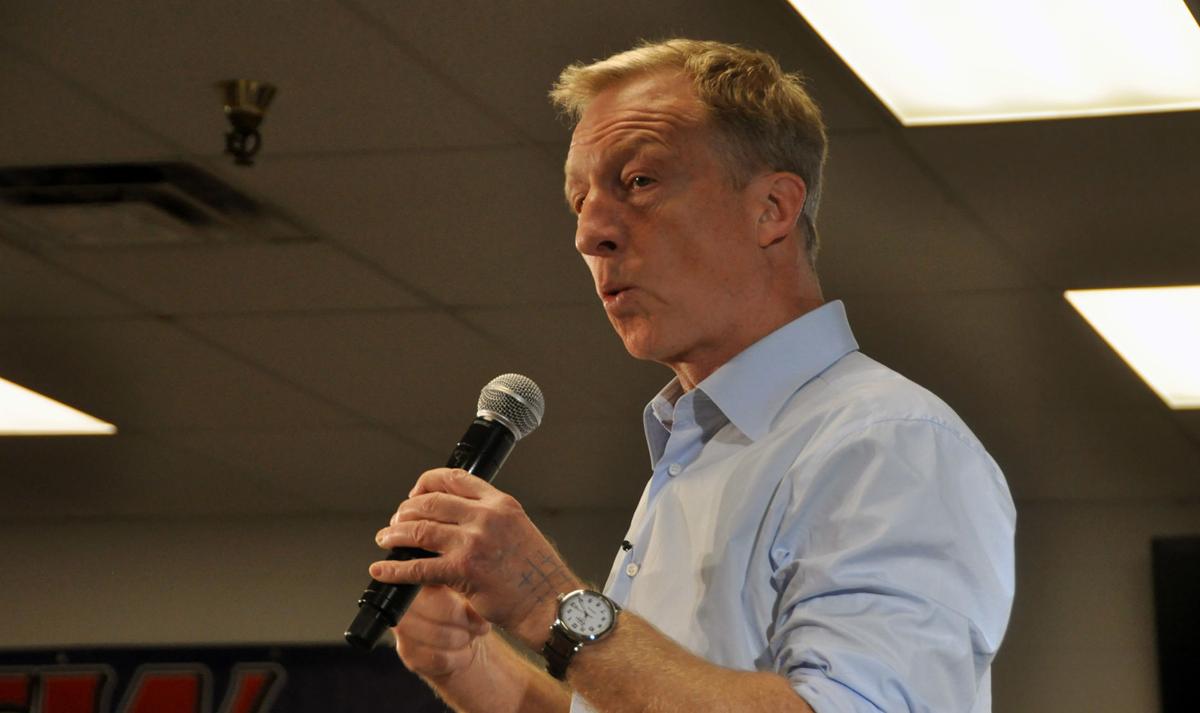 Democratic presidential candidate Tom Steyer answers questions at a joint town hall held with Colorado Secretary of State Jena Griswold, right, and moderated by Omar Montgomery, president of the Aurora branch of the NAACP, left, at a union hall in Denver on Sunday, Dec. 29, 2019.

Democratic presidential candidate Tom Steyer, left, speaks with Elizabeth Emerson, whose son was killed by a gunman in Arapahoe County in 2018, at a joint town hall held with Colorado Secretary of State Jena Griswold in Denver on Sunday, Dec. 29, 2019.

California Democrat Tom Steyer said Sunday at a Denver town hall that he decided to get in the 2020 presidential race after listening to the other primary candidates talk about critical policy goals without addressing what he had determined was at the root of so many of the nation's problems, including the climate crisis, inadequate health care and a dysfunctional immigration system.

"What I wasn't hearing was why don't we have any of this stuff to begin with," the hedge fund billionaire told about 100 people at the International Brotherhood of Electrical Workers union hall. "These are not new problems. And what I know is, we have a broken democracy in Washington, D.C. Special interests have bought the government, and that's why we don't have any of those things."

Said Steyer: "So when we really talk about taking back our government, we're talking about taking back the ability to invest in ourselves and to exert the rights of Americans in the 21st century. That's the big fight — against a group of extremely corrupt, self-interested people who have been taking all the money for 40 years and are willing to do whatever they can to make sure that goes on. That's the fight."

One of 17 Democrats on the ballot for Colorado's March 3 presidential primary, Steyer joined Colorado Secretary of State Jena Griswold for a fast-paced discussion about what they termed democracy issues, including campaign finance, election procedures and voter engagement. The roughly 90-minute forum was moderated by Omar Montgomery, president of the Aurora branch of the NAACP and the runner-up in last month's Aurora mayoral election.

Griswold, who isn't making an endorsement in the presidential primary, held a town hall devoted to the same issues earlier this month with U.S. Sen. Amy Klobuchar of Minnesota. A spokesman for Griswold said to expect more town halls with presidential candidates as Colorado's Super Tuesday primary approaches.

Steyer outlined a series of reforms he argued will be necessary before Democrats can enact long-sought policies.

"We're going to have to push across the board to structurally change Washington, D.C., so it responds to you and not to the corporations," he said.

"When I look at where we're going in 2020, we are going to have to win a sweeping victory so we can restore our democracy. That is not health care, that is not schools, that is not clean air and clean water, that is not wages — but what it is, is the only way we get those things."

Near the end of the forum, he shared an emotional moment with a Douglas County woman who fought back tears as she told Steyer her son had been shot to death in Arapahoe County last year.

"I'll do my best not to cry," said Elizabeth Emerson, as Steyer stepped down from the stage and embraced her.

"Will you talk about guns?" she asked.

Calling the level of gun violence in America "completely off the charts," Steyer listed elements of his plan to address gun violence, including background checks, licensing gun owners and registering assault weapons, banning the sale of additional assault weapons and instituting a voluntary gun buy-back.

"But in order for us to get that, we're going to have to take back this government," he said. "Do I believe we can respect the Second Amendment while having all those things? I absolutely believe we can. This to me is the perfect example of why this government has failed, because it makes no sense whatsoever, and Americans are dying."

Washington, he said, has been paralyzed by the gun manufacturers.

"If we had a national referendum, we'd have mandatory background checks in about a week," he said.

Referring to his campaign finance voucher proposal, Steyer added: "All of a sudden, everybody gets to figure out where to give some money. And it brings people into the system and completely changes the way the money works."

Asked to talk about his plan to combat climate change — a signature issue since he got in the race — Steyer pledged to declare a state of emergency as soon as he's sworn in, if he's elected president.

"Look, I'm the only person who's running for president who will say that climate is their number one priority," he said. "If you actually look at the facts, this has to be — I've said I would declare a state of emergency on day one, because it's an emergency. And I would start using the emergency powers of the presidency to start getting going on rebuilding America in a sustainable fashion right away — building codes, meaning rebuilding buildings; renewable portfolio standards, meaning rebuilding our utility system; mandating what kind of cars can be produced, meaning we're going to have to build a whole lot of new stuff."

He also said he would establish a "solution-oriented" commission on race on his first day in the White House.

Noting that some of the Democrats on stage at the last debate sidestepped a question about reparations for slavery, Steyer said: "Let me just be clear — I'm for reparations. The only question is to go through the history so we can talk about how this should be done. Not whether, but how. I don't believe we can be the society we want to be until we embrace the concept of justice and openly acknowledge the injustice that's been done."

A woman said her teenage daughter wanted to know why the wealthy Steyer was the best candidate to take on the system.

He said that about a decade ago he signed a pledge to give away about half his fortune — this year, Forbes estimated it at $1.6 billion — after walking away from an investment business he started from scratch with a partner in the 1980s.

He noted that none of the other presidential candidates support term limits for members of Congress.

"If we're going to change this government, we're actually going to have to change this government and do things that upset people from Washington, D.C. — which is fine by me," Steyer said. "But the question is, who are you really going to trust to get it done when the chips are down? Who doesn't care one bit if the people in Washington, D.C., feel a little discommoded at their cocktail parties?"

A prominent megadonor to Democratic causes for the past decade, Steyer has so far spent about $80 million on advertising in the presidential primary, according to the Associated Press. That's less than the $120 million spent by fellow billionaire Michael Bloomberg, the former mayor of New York City, but more than four times the advertising expenditure of the next closest Democratic candidate, South Bend, Ind., Mayor Pete Buttigieg.

Before he joined the primary field in July, Steyer led the national "Need to Impeach" campaign, appearing in ads urging Congress to impeach President Donald Trump. He also founded and was the chief funder behind NextGen America, an organization devoted to mobilizing young voters.

"The only route to real political change, the only route to taking back this government is turnout," he said at the Denver forum, adding that his organization has spent years asking a good share of the tens of millions of "sporadic" Democratic voters why they don't tend to vote, in an effort to increase turnout.

"They always say the same things," Steyer said. "They say, 'No one tells the truth,' 'Neither party cares about me and what is actually going on in my life.' 'The system has been bought, why would I vote?' Our whole goal has got to be to go to those tens of millions of people and say to them, 'That's the past. We swear to God this system is going to respond to you. We will do whatever it takes.'"

Calling Colorado "a model of what our democracy should look like," Griswold cited the state's routinely high voter turnout and pointed to legislation passed this year to add polling locations and mail ballot drop-off sites across the state to make voting even easier.

"We should strive and continue to strive to have the best democracy in this nation, because democracy reform — it's not a partisan thing," said Griswold, a Democrat. "You talk to Republicans, unaffiliateds and Democrats, and people can agree that our election should not be for sale, and that U.S. citizens should not be turned away from the polls."

Gail Nuth, who drove from Monument to ask Steyer about climate change, said he had won her over with his answer.

"He was really good about seeing it's an emergency," she said after the forum. "We've had our heads in the sand. I feel like what I"m hearing from Tom is a sense of urgency regarding climate change. To me, as a grandmother, that's what's most important to me. I'll be voting for him."

Steyer is polling at 1.7% support nationally, according to the FiveThirtyEight Democratic primary averages, putting him in a tie for ninth place with U.S. Rep. Tulsi Gabbard of Hawaii.

According to FiveThirtyEight, he's doing somewhat better in Iowa, coming in sixth place with 3.3% support, and in New Hampshire, with 3.1% support, though that's only good enough for ninth place in that state.

There hasn't been a recent poll of primary voters in Colorado, but an August survey found Steyer in 22nd place with 0% support, behind nine candidates who have since dropped out.