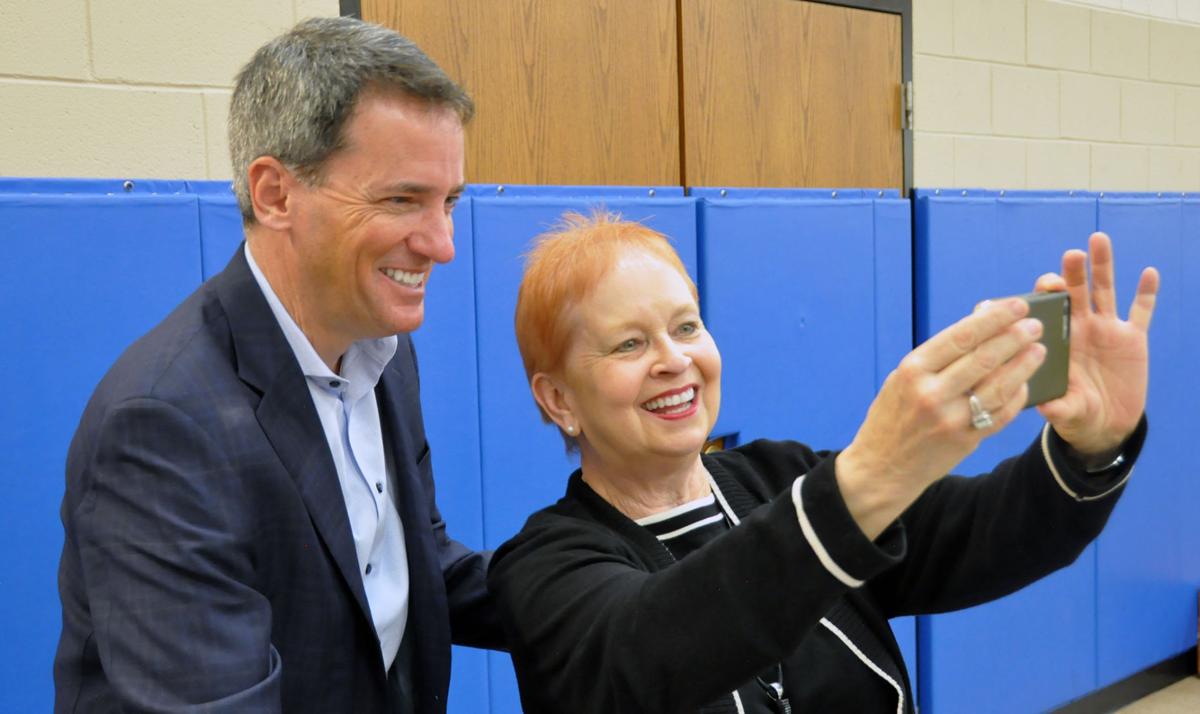 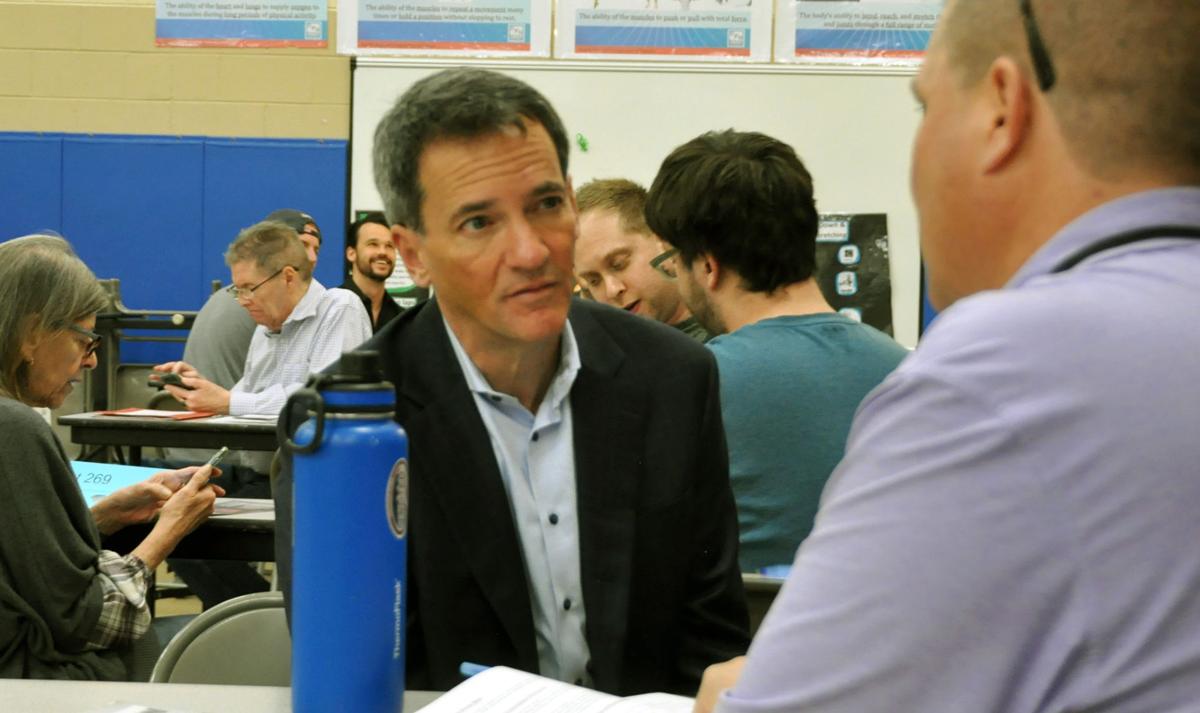 Democratic U.S. Senate candidate Andrew Romanoff trounced the competition in Colorado’s precinct caucuses Saturday, winning 54.5% of the vote in a statewide preference poll that kicks off a series of steps to qualify for the June primary ballot.

The former state House speaker, a darling of the progressive left, defeated former two-term Gov. John Hickenlooper, who has the backing of national Democrats and scored 30.3% of the vote, according to partial, preliminary results from 60 of the state's 64 counties compiled Sunday night by the Colorado Democratic Party.

Three lesser-known candidates trailed. Scientist and educator Trish Zornio finished with 6.4%, former congressional candidate Stephany Rose Spaulding got 5.2%, and entrepreneur Erik Underwood, a long-shot candidate for governor two years ago, got 0.2%, with 3% of caucus-goers uncommitted in the non-binding vote conducted in more than 3,000 precincts across Colorado.

Hickenlooper is also seeking the ballot by petition, along with four other Democrats who are hoping to challenge U.S. Sen. Cory Gardner, the Republican incumbent.

“Our 'overlooked,' 'shoestring' campaign just defied the odds and won the (Colorado Senate) caucuses by 25 points — beating the 'national Democratic heavyweights' who bragged about 'kicking butt' days ago," Romanoff said in a tweet Sunday night, referencing news reports about the race.

"This victory belongs to everyone ever counted out or knocked down."

A week ago, at a joint event in Denver with U.S. Sen. Kirsten Gillibrand, Hickenlooper told reporters he expected to win the caucus preference poll. The New York Democrat, who endorsed Hickenlooper before the two attended a fundraiser, said with a laugh that he was "going to kick some serious butt."

A spokesman for the Hickenlooper campaign didn't respond to a request for comment Sunday night.

Romanoff carried 30 of the 60 counties that had reported results by Sunday night, including all 10 of the state's largest counties, outflanking Hickenlooper by nearly three-to-one in Denver and Boulder.

Hickenlooper's biggest win was on the Western Slope in Mesa County, the state's 11th largest. The two tied in northeast Colorado's Phillips County, on the Nebraska border, where each got three votes.

Four small counties — Alamosa, Costilla, Hinsdale and San Juan — had yet to report results Sunday night. The largely rural Cheyenne County, east of Colorado Springs on the Kansas border, reported on Saturday that no one attended its caucus.

Zornio, who was sidelined from the campaign trail for much of last week with an illness, told Colorado Politics she would re-assess her plans after reviewing the caucus results but didn't "have any plans of stopping" before the state assembly.

"I’m a scientist, not a fortune teller," she said with a chuckle. "I genuinely have no idea what’s going to happen."

At least 15,552 Democrats turned out for the Saturday afternoon caucuses, according to state party reports — down sharply from two years ago, when more than 23,000 caucus-goers showed up to weigh in on competitive races for governor and other statewide races, as well as primaries in nearly every congressional district.

Attendance was lower than expected, Colorado Democratic Party chair Morgan Carroll told candidates in an email, amid fears of a coronavirus outbreak and confusion among voters over last week's presidential primary, the first the state has held in 20 years. In addition, caucuses were moved for the first time from Tuesday night to Saturday, which turned out to be an unseasonably warm day.

Through the evening Saturday and late into the day Sunday, the state Democrats' website reporting caucus results was plagued with miscalculations and incomplete returns that were removed and later updated, frustrating campaigns and election watchers.

In a statement issued Sunday night, Carroll thanked the volunteers who ran the caucuses and praised county officers "for working around the clock to make sure the data submitted from their caucuses was accurate, up-to-date, and complete."

Added Carroll: "No matter which candidate they support, Democrats yesterday showed that they’re united with one goal — to defeat Cory Gardner."

Romanoff told Colorado Politics that he was itching to move his campaign into higher gear as the focus shifts to persuading a much larger universe of primary voters, who start receiving mail ballots in three months.

"More than a million votes were cast in the Democratic presidential primary on Tuesday, so we've got our work cut out for us, trying to reach the folks who are going to determine the nomination in June," Romanoff said. "We have to super-size our operation."

He said his campaign will need more volunteers "to meet as many voters face-to-face or phone-to-phone or text-to-text as we can," as well as more money to afford TV advertising, "because we know a lot of folks are going to make up their mind not based on the conversations we have in their backyard, but instead based on the ads they see."

He's got some catching up to do.

Hickenlooper, who entered the race in September after abandoning his bid for the White House, reported raising nearly $5 million through Dec. 31 and had $3.2 million on hand, while Romanoff, who launched his campaign a little over a year ago, raised $1.8 million through the same period and had about $700,000 on hand.

The next fundraising deadline is March 31, with reports for the quarter due April 15.

Precinct caucuses are the first step for state and federal candidates seeking a spot in Colorado's June 30 primary. Democrats elect delegates to county and district assemblies and eventually convene at the state assembly on April 18, where it will take 30% support to advance to the primary.

U.S. Senate candidates can also make the ballot by turning in 10,500 valid petition signatures, including 1,500 from each of the state's seven congressional districts.

Hickenlooper is so far the only Democratic U.S. Senate candidate to turn in petitions. He delivered them to the Secretary of State's Office on Feb. 19, and they are in the process of being verified.

The deadline to submit petitions is March 17.

Candidates who petition and go through assembly have to get at least 10% support among delegates, or their petitions won’t count, even if they have sufficient signatures — though candidates who start the caucus-assembly process aren't required to stick with it if they successfully petition onto the ballot.

Underwood, the former gubernatorial candidate who brought up the rear in Saturday's Senate preference poll, said he was undaunted by the results and plans to forge ahead through the state assembly.

"Just because you come in hot from the caucus does not mean that you end up the nominee," he told Colorado Politics on Sunday night.

Underwood said he doesn't expect Hickenlooper will continue on the caucus-assembly route if his petitions are deemed sufficient. He's hopeful he can "flip" enough of Hickenlooper's delegates his way to be competitive.

"I do think there is room," he said. "The caucus results are not binding. I’ve been in politics long enough to know it is an eternity from now to the April 18 state assembly. Anything can happen."

UPDATED: Democrats at caucuses in north Pueblo gathered at Centennial High School on Saturday to begin the process of picking the Democrat who…