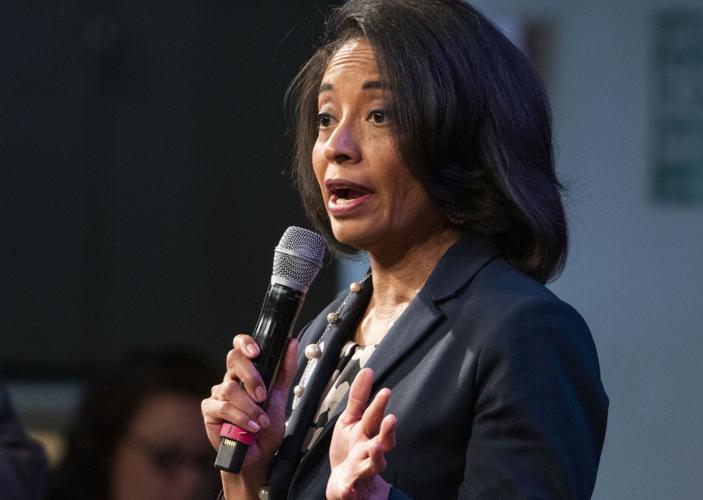 Denver mayoral candidate Lisa Calderón speaks during a candidate forum hosted by One Colorado and held at the EXDO Event Center in Denver on April 4. (Andy Colwell for Colorado Politics) 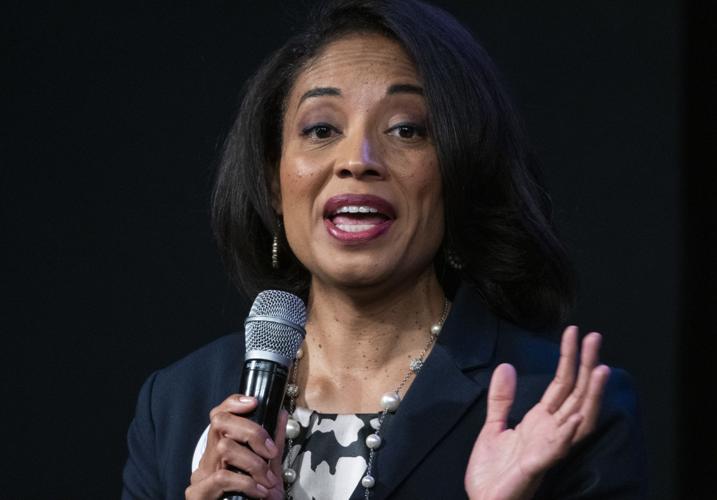 Denver mayoral candidate Lisa Calderón speaks during a candidate forum hosted by One Colorado and held at the EXDO Event Center in Denver on April 4.

Denver mayoral candidate Lisa Calderón speaks during a candidate forum hosted by One Colorado and held at the EXDO Event Center in Denver on April 4. (Andy Colwell for Colorado Politics)

Denver mayoral candidate Lisa Calderón speaks during a candidate forum hosted by One Colorado and held at the EXDO Event Center in Denver on April 4.

This is the fourth in a series of profiles of Denver mayoral candidates.

Much of what Denver mayoral candidate Lisa Calderón has talked about on the campaign trail traces back to her life experience.

When she talks about her interest in criminal justice matters, she recalls her experience when, she claims, her then-15-year-old son was mistreated by the police.

When one of her opponents talked about a history exhibit on exclusionary red-lining practices by banks, Calderón spoke about what it was like to live in one of those neighborhoods that she believes was red-lined.

And when the topic turns to sentencing reforms and jail overcrowding, she cites her experience as executive director of a nonprofit re-entry program for inmates coming out of the jail after serving their time.

In fact, Calderón said the Hancock administration’s decision to terminate the city’s contract with her nonprofit was one of several factors that convinced her to jump into the mayoral race.

LISTEN to John C. Ensslin's interview with Lisa Calderón below.

“It was one of the factors absolutely. But in the scheme of things it was a relatively small contract,” Calderón told Colorado Politics.

“The larger issues had to do with the fact that our jailing system is fundamentally broken,” she added. “And I couldn’t fix that just from being on the inside.”

The termination of her nonprofit’s contract with the city also spurred a federal lawsuit which is still pending in U.S. District Court.

Calderón contends the contract was canceled in retaliation for her outspoken criticism of jail management in her role as co-chair of the Colorado Latino Forum. The Hancock administration has denied those claims.

The lawsuit does put Calderón in the unique situation of suing the city while at the same time running to lead it.

Asked if that felt a bit awkward, Calderón replied with a laugh, “Well, obviously, if I win as mayor there’s no need to sue.”

Last book read: “How to Kill a City – Gentrification, Inequality and the Fight for the Neighborhood” by P.E. Moskowitz

Pet peeve: "When private construction firms leave up temporary barriers after-hours or on weekends when no construction is taking place which adds to the traffic congestion and increased air pollution from car emissions."

What most people don’t know about her: “I like dark chocolate and riding bicycles.”

Quotable quote: “ Because this administration’s attitude is there’s nothing we can do about gentrification, market forces have basically displaced people. But market forces are formed by government policies.”

"But the issues that I’m [suing] about will be resolved in that I wanted accountability and transparency,” she added. “And we don’t have that right now.”

Her decision to enter the mayoral contest marks the first time that Calderón, a professor of criminal justice at Regis University, has run for public office.

But like many of the candidates, she grew up around politics from an early age.

When she was 4 years old, her mother – who was then a student activist – used to take her daughter to picket-line demonstrations in support of Cesar Chavez and his United Farms Workers boycott of California grapes and lettuce.

“So, I got my experience young in how public policy impacts the lives of everyday people,” Calderón said. “And from there I have been a community organizer and have also worked both inside and outside of government on issues of concern.”

She has talked during the campaign about her desire to become the first woman mayor in Denver’s history.

But during an interview, Calderón said running for mayor initially was not one of her goals in life.

“This was not a dream of mine,” she said. “It was more feeling compelled and really trying to encourage others to get in the race because as someone who was born and raised in Denver, I did not like the way that I was seeing my city going where we have development that feels out of control a lot of times. The diminishing of our public spaces and seeing a lot of the things that made Denver beautiful rapidly going away.”

“So, I wanted to preserve that and felt we were at a crossroads,” she added.

She said it took an “intervention” from some of the other women with whom she was talking to, who encouraged her to run.

“So, I had to come to that realization that I was the one I was looking for,” she said.

Like most the mayoral challengers, Calderón has criticized the Hancock administration for not doing more to curb the sense of displacement and gentrification that has accelerated during the last eight years.

“We know growth is part of a city’s revitalization,” she said. “Everyone wants revitalization. I remember the days when we were a cow town, when we would come downtown and there would be nothing open and nothing happening.”

“I appreciate the options that we now have. But it has been at the cost of a lot of people who have been here, who have made this city great and on the backs of the workers,” she added.

“So, I really want to return back to center, meaning that we want to keep revitalization, but we don’t want the displacement that has occurred because of it.”

When asked for a specific example of growth and development that could have been done better, she cites the Five Points neighborhood, where she said her father’s family were among the first black business owners in the neighborhood.

“But because this administration’s attitude is there’s nothing we can do about gentrification, market forces have basically displaced people,” Calderón said. “But market forces are formed by government policies.”

Calderón also has focused more than some of her opponents on criminal justice matters, such as overcrowding at the jail.

She contends there are too many homeless people and others with drug problems who are revolving in and out of the jail system.

As for the homelessness problem, Calderón said she understands and supports the principles behind Initiative 300 – which would repeal the city’s urban camping ban and assert the rights of the homeless to live on the streets. But she has stopped short of endorsing the measure.

“I feel like Initiative 300 is forcing the conversation that the city should have had years ago but failed,” she said.

As for the other ballot question on decriminalizing "magic mushrooms", Calderón said she said her experience as a criminal justice professor and student of history has taught her that the war on drugs has been a failure.

“If you want to reduce drug use in your community there are other more effective ways of doing that,” Calderón said.

“I am in favor of decriminalization through sentencing reform, through transforming our bailing system as we have people who are sitting in jail who are not convicted and those places can be filled by far more dangerous people who actually do need to be removed from society,” she added.

COVER STORY | Meet Denver's next mayor: The candidates charge into a pivotal election

This week, CoPo offers profiles of the candidates for Denver mayor.

The federal appeals court based in Colorado has reinstated the lawsuit of former Denver mayoral candidate Lisa Calderón against the city, in which she alleged the Hancock administration ended her organization’s offender-services contract after she made critical comments about the sheriff's department.