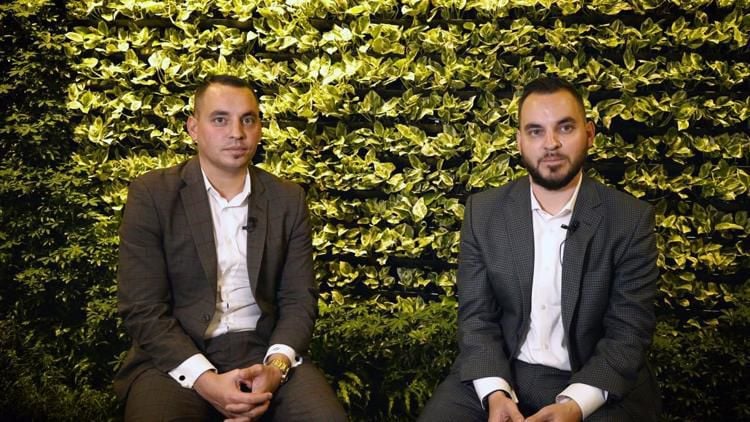 Twins Eric Speidell and Kyle Speidell, 33, sit in front of a wall of plants at The Green Solution's new Denver headquarters. The Speidell brothers’ dispensary chain has amassed 48 Colorado licenses to grow, manufacture and sell cannabis products and has expanded to five other states and Canada. (Hannah Tran, The Gazette) 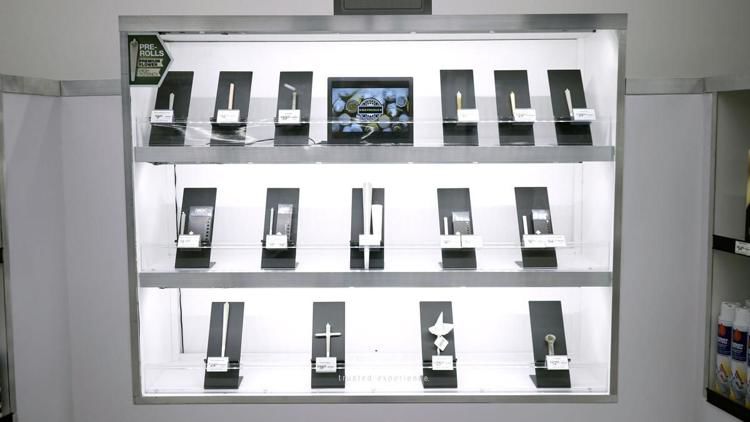 A display of pre-roll products inside one of Green Solution’s recreational marijuana facilities. (Hannah Tran, The Gazette) 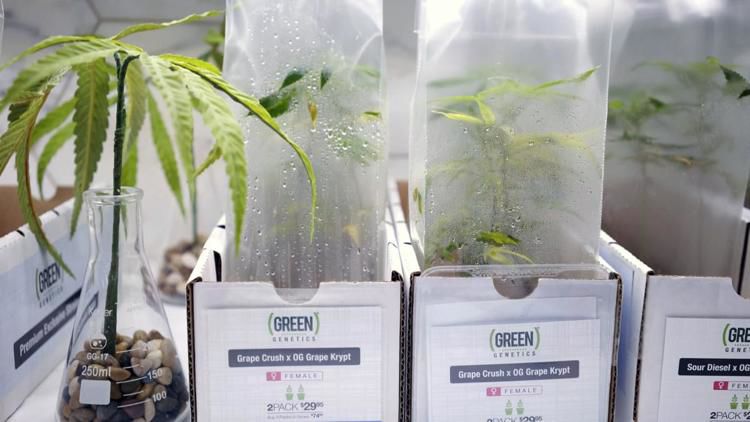 Plants for purchase sit inside one of The Green Solution’s marijuana facilities. (Hannah Tran, The Gazette)

Twins Eric Speidell and Kyle Speidell, 33, sit in front of a wall of plants at The Green Solution's new Denver headquarters. The Speidell brothers’ dispensary chain has amassed 48 Colorado licenses to grow, manufacture and sell cannabis products and has expanded to five other states and Canada. (Hannah Tran, The Gazette)

A display of pre-roll products inside one of Green Solution’s recreational marijuana facilities. (Hannah Tran, The Gazette)

Plants for purchase sit inside one of The Green Solution’s marijuana facilities. (Hannah Tran, The Gazette)

The joint chiefs of the company are 33-year-old twins.

They first went into business as brothers who bought and flipped houses, until the real estate bubble burst into the Great Recession.

One then left for the Marines, inspired by an older brother sent to war in Afghanistan and Iraq.

What brought this diverse band of brothers back together? Marijuana.

Their venture started with a single medical marijuana store a mile from their childhood home in Northglenn. By opening day of recreational sales, they had two stores ready for lines of customers stretching around the block.

Since then, the Speidell chain, better known as The Green Solution, has amassed 48 Colorado licenses to grow, manufacture and sell cannabis products and has spread to five other states and Canada.

Their ambitious company mission is to go global.

Marijuana has turned quickly into a huge new Colorado industry, with franchises, international expansion and armored carloads of cash. While it is illegal to transport Colorado pot across state lines, the state’s marijuana expertise and entrepreneurialism are being exported far and wide.

Who actually holds all of Colorado’s licenses has always been something of a mystery because no state record provides a full answer.

Of the 812 people who hold marijuana licenses statewide, as of early August, we identified 473 individuals holding more than one license for medical or recreational sales, including four top pot barons or groups, by combining and analyzing two separate state databases.

Together, these four top entities hold at least 222 licenses to grow, manufacture and sell cannabis products.

Besides The Green Solution, which employs 700 people, the biggest players are:

Native Roots. As of August, its owners held 67 state licenses and were expanding to Canada, where the company says online sales will be allowed. When one of its owners bought a 120,000 square foot warehouse in Denver, it was billed as the world’s largest cultivation facility. Native Roots also applied unsuccessfully for naming rights to Mile High Stadium.

John Lord. As of August, his LivWell chain held 48 Colorado licenses and 140,000 square feet of grow space. LivWell has branched to Oregon and Canada and partnered with celebrities Willie Nelson and Snoop Dogg to broaden its recognition.

John Fritzel. He held 59 Colorado licenses as of August, some with partners, and has grow houses in 10 states, we found. His biggest national operation is MJardin, started with business partners Adam Cohen and James Lowe. In 2016, when Florida issued its first five cultivation licenses, MJardin got contracts to run all five for the license holders. Fritzel also invested in Maryland Compassionate Care, one of the first companies to get a cultivation license for medical marijuana there.

In Canada’s example, Colorado’s leading marijuana merchants hope that the United States will legalize their products soon nationwide, as they already are in Colorado and several other states.

As high-tech was to Silicon Valley, marijuana is to mile-high Colorado.

And the leading entrepreneurs of this billion-dollar business are more likely to sport suits than tattoos.

“Our dad works with us. Our mom helps out,” he said.

The Native Roots chain of recreational dispensaries sprang from a single store on the 16th Street Mall in Denver.

Jordan was joined by Josh Ginsberg, who had opened the Dandelion medical marijuana store in Boulder, and a third entrepreneur, Peter Knobel, to form the Native Roots Dispensary.

Its first recreational store opened in February 2014 with a line of blue tape separating medical customers from pleasure seekers.

Four years later, the chain boasts it “has become one of the largest cannabis companies in the world,” with 20 retail locations in Colorado and expansion potential across the United States and into Canada.

It says it has four licenses so far in Manitoba.

Native Roots employs nearly 600 people who grow marijuana, manufacture concentrated forms of it, sell it in dispensaries and handle other business needs.

Daily operations have been turned over to Ryan Brown, a Golden native who graduated from the University of Denver with degrees in business administration and philosophy.

A former business consultant, he said he never envisioned a future in marijuana sales — until some old friends talked him into it.

Today, “Our object is to liberate happiness,” he said. In the stores, “we offer an experience that we think is unparalleled. Friendly and comfortable.”

Over time, he hopes the industry will gain normal banking rules and business tax deductions.

As Native Roots was building its business, it offered a special incentive to Colorado recreational customers, paying the taxes of those who could show residency.

The company says it no longer does that.

“Native Roots realigned its pricing structure over the last several real months,” Brown said, “to provide cost-effective pricing and meet the needs for everyone, regardless of their residency.”

'One of Colorado's architects'

John Lord, a native of New Zealand farm country, heads the LivWell chain. In Colorado, he has found a much more lucrative form of agriculture half a world away.

He holds 48 Colorado licenses to grow, manufacture and sell cannabis products, though some are for optional premises, a separate license for the manufacture of medical products.

He also has brought pot celebrities Willie Nelson and Snoop Dogg into his flock, selling Willie’s Reserves and Leafs by Snoop.

From Colorado, Lord expanded his sales into Oregon and Canada and applied for an Ohio license.

Ohio turned him down. But his application showed a Colorado political leader would have been a partner.

Sal Pace, a Pueblo County commissioner and former House minority leader in Colorado, is lauded in the application as “one of Colorado’s architects” of marijuana policy.

“He has been integrally involved with the crafting of much of Colorado’s first-in-time, highly regulated medical marijuana and adult use programs,” the application read.

Lord declined to be interviewed for this story.

Pace said he works only with associates he respects.

In Ohio, he would have been chief financial officer and 10 percent owner of a medical dispensary.

“Ohio is one of the worst programs I’ve seen,” he said.

He’s seen a variety. By his own count, he has served as a marijuana policy consultant to groups in a dozen states in the last year. He would not disclose his earnings for that work.

Pace is leaving the Pueblo commission and hoping the federal government will relax its anti-marijuana laws as soon as next year.

While he remains unsure of his future, “I don’t plan to be a license holder in Colorado,” he said.

'In a slow death'

Buddy Boy, Lightshade, MMJ America: All are sold by John Fritzel, who holds 59 licenses in Colorado, some with partners.

Like the Speidells, he was hit hard by the real estate bust and at one point filed for bankruptcy.

In the marijuana business he recovered quickly. He has branched out to Nevada, won the first five cultivation licenses in Florida and has grow houses covering 500,000 square feet in 10 states, an area comparable to a large shopping mall.

He paid a personal price for this success. A former University of Iowa basketball player, he told The Denver Post that his family had disowned him because of his involvement with marijuana.

Fritzel did not respond to interview requests.

Inside, little distinguishes it from any other corporate building aside from a giant green wall of live plants in a downstairs meeting room. (None are marijuana.)

Twins Kyle and Eric, seated before the wall in a pair of green metal chairs, recounted how a risky family venture grew into an international company.

They began by pooling a modest $100,000 and persuading Northglenn, their hometown, to grant them a medical license.

The brothers brought talents from different fields to the marijuana business.

The twins found their real estate background helpful in understanding local marijuana regulations. Brad, the oldest, had graduated from Colorado Christian University with a business management degree. Nick returned from military service in Iraq and Afghanistan with communications and security skills.

During the real estate bust, Eric followed his brother into the Marines but was not sent overseas.

Eric said his brother doesn’t talk much about his combat experiences, but noted that Nick’s communications assignments kept him a step from the deadliest dangers.

“He wasn’t kicking down doors. He was supporting those who did,” Eric said.

By 2010 the brothers were back home, but investing in real estate still seemed risky.

“All of a sudden, when Obama moved the opportunity forward, there was a boom,” Kyle said.

The boom resounded in Colorado.

The Speidells didn’t find a lot of friendly faces at the software counter, and they were precluded from using the federal banking system.

So they designed their own software and bought armored cars to transport cash.

The Speidells cheered when Canada became the first industrial country to legalize marijuana, enabling them to operate a more normal business north of the border. They plan to grow and sell in six provinces from British Columbia to New Brunswick.

Back home, they say they still face two barriers to a profitable future: banking, and IRS rules that bar them from taking ordinary business deductions.

“Our effective tax rate is over 100 percent of our net profits,” Eric said. “The industry is in a slow death. Long term, the industry can’t survive unless something changes.”

The brothers remain optimistic that something will change at the federal level. They’re betting it will be in their favor — and soon.