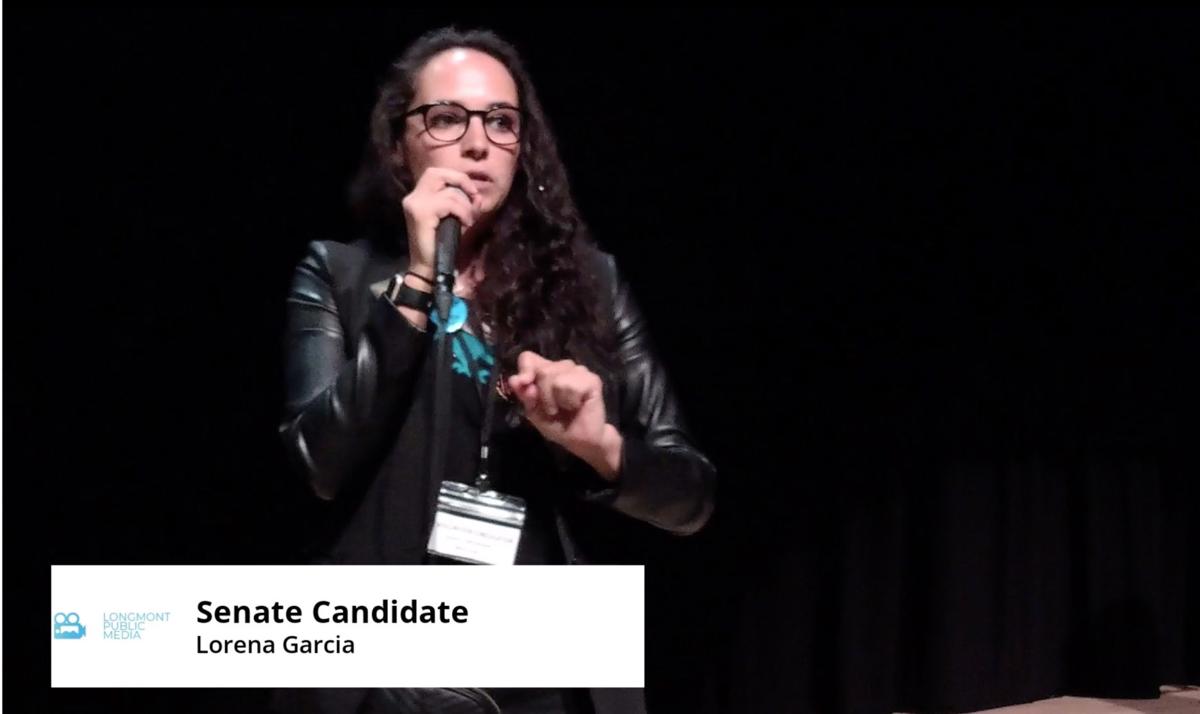 Colorado Democratic U.S. Senate candidate Lorena Garcia talks about her support for the Green New Deal at a Jan. 26, 2020, forum sponsored by Longmont Latinx Voice at the Longmont Museum. 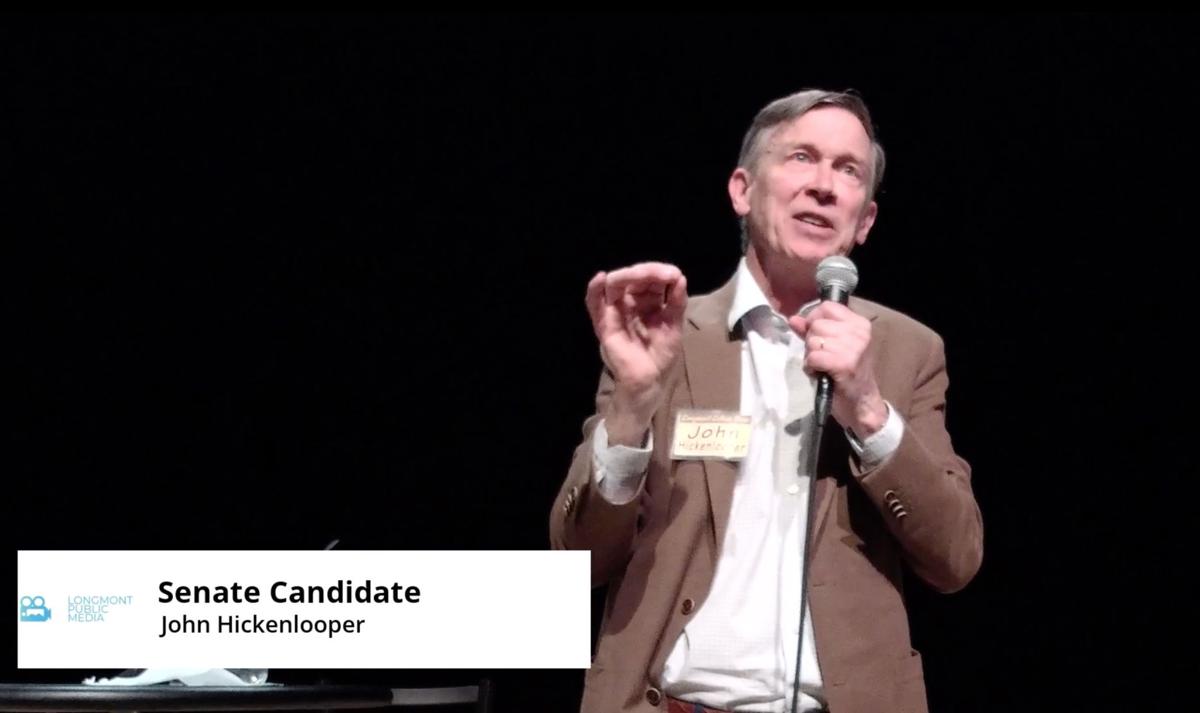 Former Colorado Gov. John Hickenlooper, a Democratic candidate for the U.S. Senate, talks about career preparation for the two-thirds of students who don't attend four-year colleges at a forum sponsored by Longmont Latinx Voice on Jan. 26, 2020, in Longmont.

Colorado Democratic U.S. Senate candidate Lorena Garcia talks about her support for the Green New Deal at a Jan. 26, 2020, forum sponsored by Longmont Latinx Voice at the Longmont Museum.

Former Colorado Gov. John Hickenlooper, a Democratic candidate for the U.S. Senate, talks about career preparation for the two-thirds of students who don't attend four-year colleges at a forum sponsored by Longmont Latinx Voice on Jan. 26, 2020, in Longmont.

All nine of the Democrats running for Colorado's U.S. Senate seat appeared Sunday at a forum in Longmont devoted to issues involving the Latino community.

The candidates each took the stage for about 15 minutes to pitch themselves in one-on-one interviews as the strongest nominee to take on Republican U.S. Sen. Cory Gardner in the fall.

Answering questions posed by moderator Nick Lopez, a former assistant attorney general, the Democrats all said they would reverse the Trump administration's immigration policies, enforce anti-discrimination laws, increase the minimum wage and boost education opportunities for Latino and other communities.

Some of the candidates threw elbows at their rivals, including repeated attacks on former Colorado Gov. John Hickenlooper by former state House Speaker Andrew Romanoff, and a pointed jab by nonprofit director Lorena Garcia aimed at Romanoff for the former legislative leader's role in passing what she called "the harshest anti-immigrant policies in the nation."

While they differed in some particulars, all the candidates suggested it was past time to tackle climate change by accelerating the transition from fossil fuels to renewable energy.

Romanoff, however, blasted Hickenlooper for suing to prevent Longmont from banning fracking when he was governor.

Hickenlooper, a former petroleum geologist, contends he was upholding a state constitutional provision that forbids the government from blocking access to mineral rights.

Romanoff also took familiar swings at national Democrats, who endorsed Hickenlooper's campaign after nudging him into the Senate race after his White House bid had stalled.

"They recruited into this race a fellow who said he didn't want the job and wouldn't be good at it, and they've done everything they possibly can to stifle this primary, to anoint a winner, to turn what ought to be a contest into a coronation," Romanoff said.

Hickenlooper, who was elected mayor of Denver twice before serving two terms as governor, pushed back against criticism over remarks he made on the presidential campaign trail that he wasn't "cut out to be a senator."

Noting that he was the one Colorado Democrat who won statewide in 2010 and 2014, two banner election years for Republicans, Hickenlooper added: "I am 50 times more fired up about this campaign than I ever was running for mayor or governor."

But Romanoff, who took the stage after Hickenlooper, wasn't cutting his opponent any slack.

Like all the candidates, Romanoff committed to holding annual town halls focused on the Latino community if he's elected to the Senate, but he also used the moderator's question as an opportunity to bash Hickenlooper.

"In this primary, we've seen a Democrat skip 10 debates. I'm glad he showed up today," Romanoff said, alluding to a handful of candidate forums Hickenlooper has skipped since joining the race in August.

"If you don't want the job and you're not willing to show up at town halls — we've got a senator like that in Washington now," Romanoff said, referencing criticism of Gardner, who hasn't held a traditional town hall in more than two years.

"Many of you were wowed by the candidate who was on stage before me," she said, "but understand his record. While he was speaker of the House, Colorado became the state that had the harshest anti-immigrant policies in the nation, that he helped negotiate. And he has yet to acknowledge his actual role in that process. We cannot elect somebody who has already thrown the immigrant community under the bus for the sake of the party or his own political career."

Calling on Democrats to "elect somebody from a family with immigrants," Garcia added: "We have to be bold and brave, and we have to do something different. And that means electing somebody different that will never throw any community under the bus for the sake of profit, party or my own career."

Romanoff, who touts his own family's immigrant background, says he "deeply regret[s]" working in 2006 with Republican Gov. Bill Owens to pass legislation intended to head off a proposed constitutional amendment that would have prevented undocumented residents from receiving most public services.

"I worked closely with the initiative’s opponents to keep that anti-immigrant measure off the ballot and out of the state constitution," Romanoff wrote in an online post in September. "But the price of our success was a compromise I’ve regretted ever since."

Two recent additions to the field made their first appearances at a Senate forum on Sunday: University of Denver professor and national security expert David Goldfischer and tech entrepreneur Erik Underwood, a 2018 Democratic gubernatorial candidate and 2016 Republican candidate for Colorado's other U.S. Senate seat.

Candidates can get on the June 30 primary ballot by gathering 10,500 valid petition signatures statewide — so far, seven of the candidates say they're circulating petitions — or by winning the support of 30% of delegates to the Democratic state assembly in April, a process that kicks off at March 7 precinct caucus.

Former Gov. Hickenlooper has been under fire for months from Republicans over reports that his administration has been paying his legal fees in the ethics case from a fund made up of federal dollars sent to the state 16 years ago.