After Gov. Jared Polis released an executive order Saturday suspending requirement for petition gathering, it touched off a flurry of efforts to get on the November ballot Monday, as well as a new lawsuit in Denver District Court.

The governor issued the executive order May 16 as an emergency measure during the coronavirus shutdown. Those hoping to get issues before voters on the November ballot need the signatures from 124,632 registered voters by Aug. 3.

“While today’s decision is a blow to the power of the people of our state to petition, it is certainly convenient for certain groups or elected leaders have to deal with fewer ballot initiatives," Polis said Wednesday. "It makes my life easier as Governor that there will be fewer curveballs coming our way, but sadly it’s at the cost of making it much harder and even dangerous from a public health perspective for activists on all sides to get their issues on the ballot for voters to decide.”

Colorado Concern and University of Denver chancellor emeritus Dan Ritchie quickly sued, saying the Democratic governor exceeded his constitutional authority by meddling in election law, which is reserved to the legislative branch and statewide. 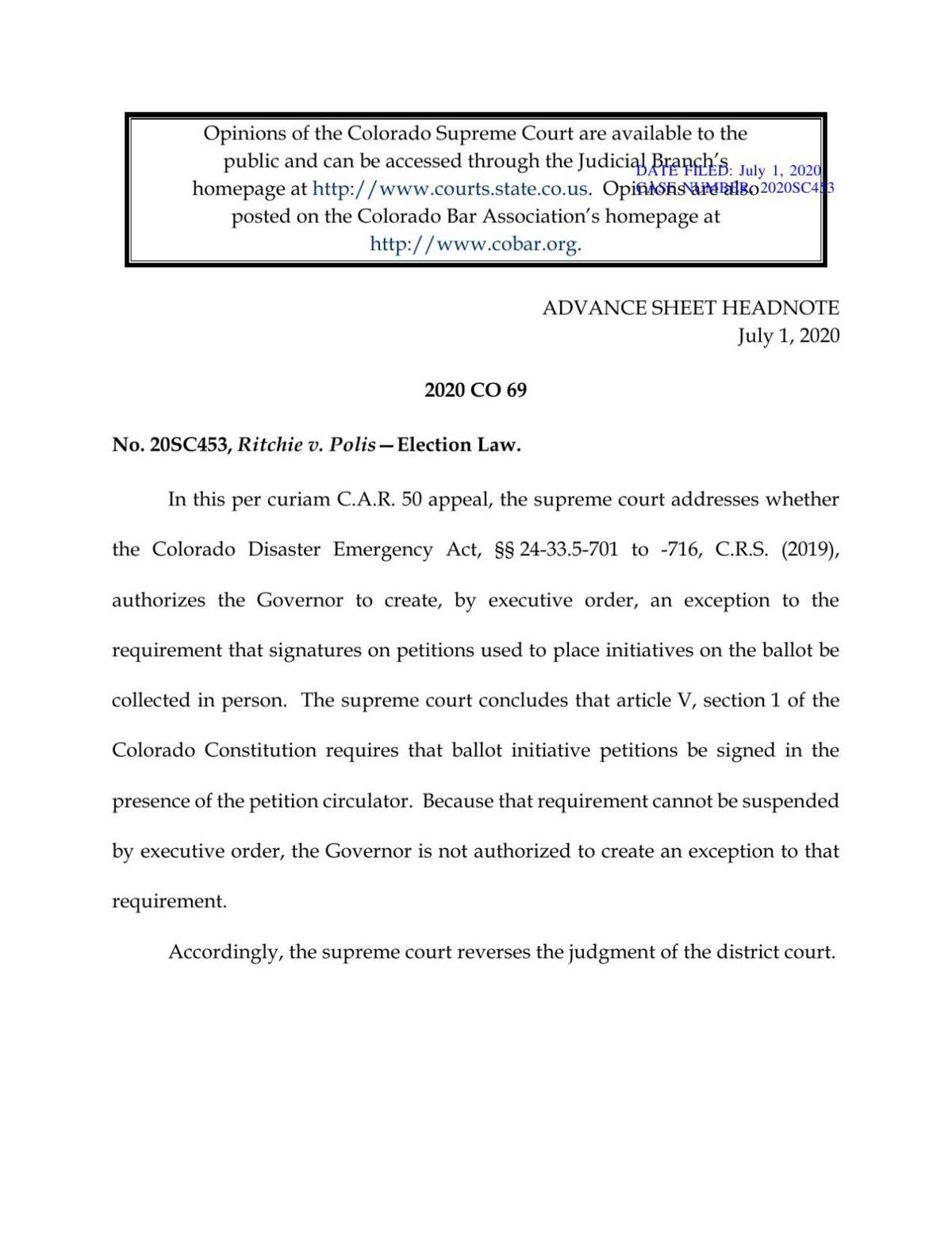 “Launching this litigation was a difficult choice, because there are so many important issues we are working closely with the governor on, literally in real time," Mike Kopp, president and CEO of Colorado Concern, said in a statement Wednesday morning. "But the underlying principle was too important – protecting the integrity of the initiative process is just as important in a pandemic as it is during a time of calm. Yes, the executive has emergency powers in a public health crisis, but those powers do not come at the expense of fundamental rules that protect the integrity of our laws. We are glad the Supreme Court agreed. We’re eager to get back to work with the Governor on the many issues that unite us. Colorado is always at its best when we are working together.”

The governor's office stressed repeatedly they believed his actions were constitutional, and a Denver District Court judge agreed last month.

In the ruling handed down Wednesday morning, the state's highest court said, "[T]he Colorado Constitution requires that ballot initiative petitions be signed in the presence of the petition circulator. That requirement cannot be suspended by executive order, even during a pandemic. We therefore reverse the order of the district court and remand for proceedings consistent with this opinion."

Many of those still trying to get on the ballot said the help came too late for them to feasibly organize an online petition effort, so they stuck with the old method of clipboards and in-person signing, using disposal pens once, wearing masks and using social distancing.

“Unlike some other groups, we’ve seen a lot of excitement around our campaign and gathering signatures in-person, so our Vote on Fees campaign won’t be impacted by this decision,” said Michael Fields, executive director of Colorado Rising Action, the conservative group trying to get on the November ballot with Initiative 295 to require voter approval for major fee increases.

Protect Colorado, a coalition that supports the oil and gas industry, also is trying to get on the ballot in November with two measures: Initiative 284 would ensure that government can't ban the use of natural gas in new homes and Initiative 304 would allow broader fiscal impact statements about proposed measures to voters before the election.

"This is great news for Colorado and everyone who believes in fair, open and transparent elections," said spokeswoman Laurie Cipriano about Wednesday's ruling. "Protect Colorado is committed to presenting voters with excellent public policy questions, such as ensuring consumer choice for energy and total cost transparency for ballot initiatives. You don’t have to change the system and violate the Constitution when you have good issues that the public supports."

She said the organization had collected more than 100,000 signatures so far using traditional petition-gathering.

Fair Tax Colorado said it was finding "innovative ways" to get signatures in support of Initiative 271,  which would raise taxes on high income earners to raise $2 billion for education and other state needs.

"We look forward to continuing this fight and having others join us, because we know the stakes are too high and the budget cuts too deep for us to do anything but forge ahead for the fairness Coloradans want and our tax code needs," the group said in a statement about the Supreme Court decision.

Eric Sondermann: "The year was 2004. Republican consultant Katy Atkinson and I led a campaign to defeat Amendment 36, an initiative to award Colorado’s Electoral College votes proportionally instead of giving all to the presidential candidate carrying the state."

A Denver District Court judge on Wednesday let stand an executive order issued by Gov. Jared Polis that allows petition gatherers to collect signatures for ballot initiatives by mail or email during the coronavirus pandemic.

The Colorado Supreme Court will step in to hear a lawsuit challenging Gov. Jared Polis' authority to decide how petitions are gathered to qualify for the November ballot.

Gov. Jared Polis has "extended and amended" a handful of executive orders to help the state cope with the ongoing effects of COVID-19, including measures on rent and elections, his office said Sunday.

The oil and gas industry is saluting Gov. Jared Polis' pledge to "actively" oppose any oil and gas measures during his first term. That prompted a pro-oil and gas group to cease work on two potential ballot measures Friday.

Sometimes it's close in election-year politics, sometime sometimes it's not. The latter was the case Tuesday for getting a ballot initiative on getting expungement of eligible criminal records on the November ballot.