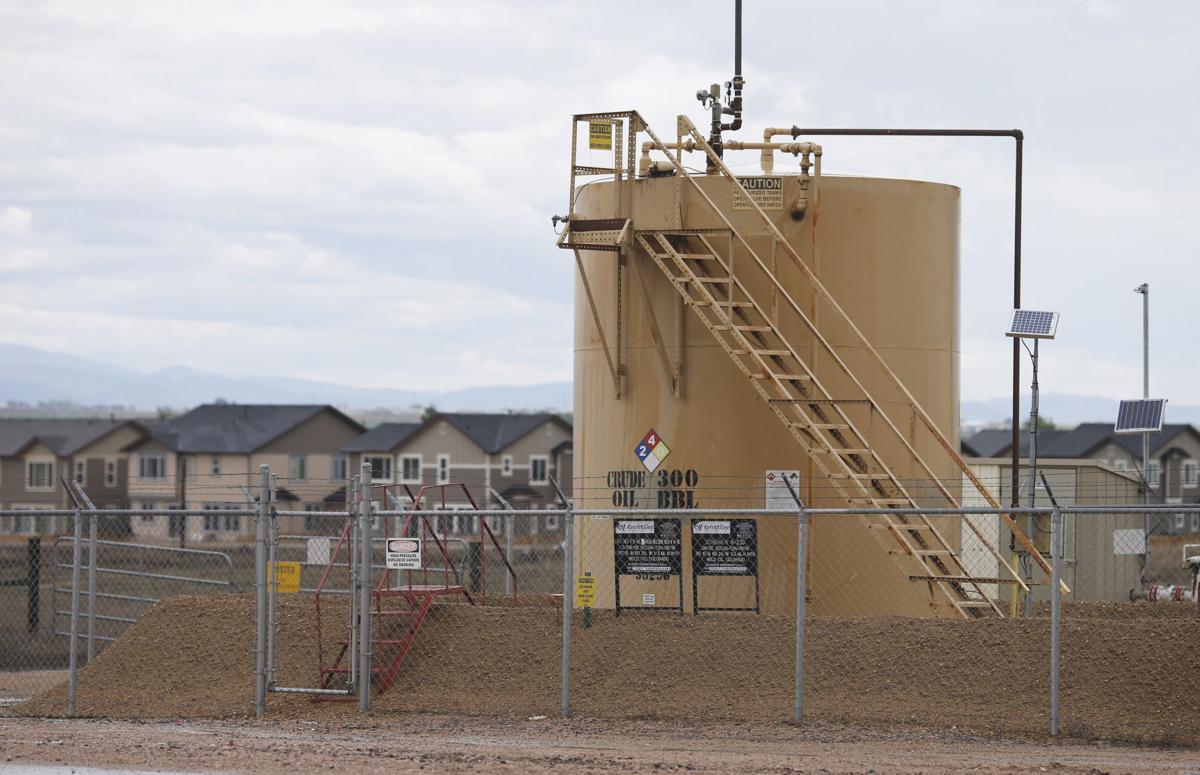 In this May 27, 2016 file photograph, tanks sit near a housing development off state highway 119 near Firestone, in the Wattenberg Field, Colorado’s most productive oil and gas area.  (AP Photo/David Zalubowski, File) 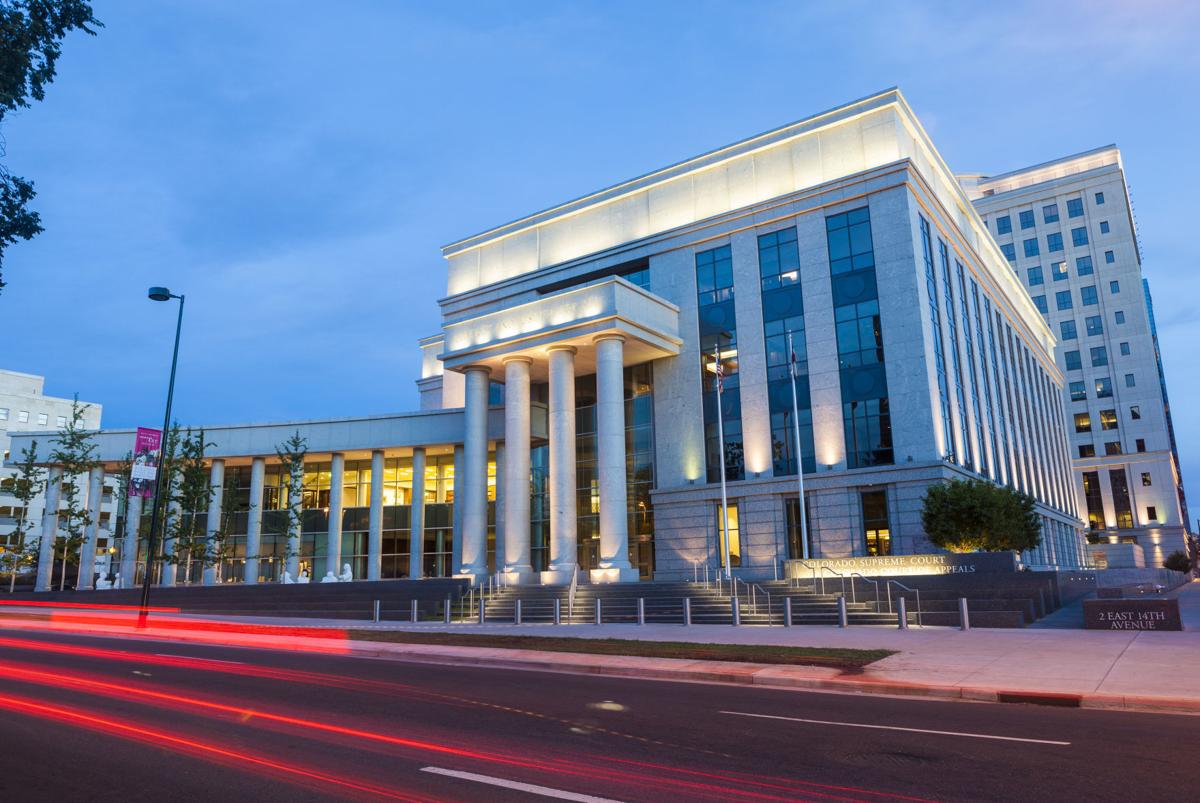 The Ralph L. Carr Colorado Judicial Center in downtown Denver is the home of the Colorado Supreme Court, the state Court of Appeals and the office of the state attorney general.

In this May 27, 2016 file photograph, tanks sit near a housing development off state highway 119 near Firestone, in the Wattenberg Field, Colorado’s most productive oil and gas area.  (AP Photo/David Zalubowski, File)

The Ralph L. Carr Colorado Judicial Center in downtown Denver is the home of the Colorado Supreme Court, the state Court of Appeals and the office of the state attorney general.

The Colorado Supreme Court said Monday that state law does not allow regulators to make public health and the environment their top priority when setting rules for oil and gas drilling. But Democrats who control the Legislature and the governor's office said they plan to change the law.

The high court's long-anticipated ruling said state law requires regulators to "foster" oil and gas production while protecting public health and the environment. But the court says regulators must take into account whether those protections are cost-effective and technically feasible.

Community advocates and environmental groups wanted the court to rule that health and the environment should take precedence over oil and gas production. That could have placed tighter rules on where companies can drill.

READ THE RULING (AT LEFT ON DESKTOP; AT THE END OF THIS STORY ON MOBILE)

The ruling (download here) is a victory for the industry, but tighter state rules will almost certainly lie ahead, say newly inaugurated Gov. Jared Polis and top Democrats in the Legislature.

"While I'm disappointed by today's ruling, it only highlights the need to work with the Legislature and the Colorado Oil & Gas Conservation Commission to more safely develop our state's natural resources and protect our citizens from harm," Polis said in a statement.

The governor wants local governments to have more control over the industry, which could result in more restrictions on how close wells can be drilled to homes and schools.

In his State of the State address last week, Polis said it will be a top priority of his administration to move the state toward all-renewable energy sources by 2040.

"As governor, my goal is to lead the statewide transition to a clean, sustainable, and growing economy," Polis told lawmakers Thursday at a joint session of the Legislature. "It is imperative for our climate, our security, our health, and our economic growth imperative for all Coloradans to address climate change."

Shortly after Monday's ruling, the leader of Colorado's Democratic-controlled state House of Representatives said the legislature will work to change the law so the oil and gas industry has to do more to protect public health and the environment.

She said residents are concerned about the industry's impact on air and water and about the potential for explosions.

In 2017, two people were killed in a home explosion and fire in the northern Colorado town of Firestone that was blamed on a severed pipeline from a nearby natural gas well.

Oil and gas drilling is hotly debated in Colorado, which ranks fifth nationally in crude oil production and sixth in natural gas, according to the U.S. Energy Information Administration.

The state's most productive oil and gas field — which is also one of the 10 most productive in the nation — overlaps fast-growing communities north of Denver, triggering frequent disputes over the proximity of wells to neighborhoods.

The debate has played out in the courts, at the ballot box and before the Oil and Gas Conservation Commission.

Voters have repeatedly defeated ballot measures to expand the minimum distance between wells and occupied buildings. The most recent defeat came last November, after the energy industry spent lavishly on ad campaigns that said the measure would kill jobs and throttle a lucrative industry.

The ruling came in a lawsuit filed by six young people who asked the Colorado Oil and Gas Conservation Commission in 2013 to require that energy companies show they would not harm human health or the environment or contribute to climate change before regulators issued a drilling permit.

The commission refused, saying it did not have that authority.

A district court sided with the commission, but the Colorado Court of Appeals reversed the lower court in a 2-1 decision in 2017.

“Today’s outcome is positive for all Coloradans," said Tracee Bentley, executive director of the Colorado Petroleum Council, in a statement.

"The court was right to deny a single out-of-state interest group — one that advocates for ending all energy development across the country — the ability to rewrite our state’s laws," Bentley said. "This attempt to advance their extreme agenda into other states and against other industries would have put hundreds of thousands out of work and drain state and local coffers for education and other basic services."

The Colorado lawsuit is one of several nationwide in which youthful activists argue state and federal governments are threatening their futures by not doing enough to battle climate change and protect the environment.

Julia Olson, one of the lawyers in the Colorado lawsuit, also represents young clients in a climate change lawsuit filed in Oregon federal court.