The decision reverses an April 21 ruling by a Denver District Court judge, who determined Warren collected a sufficient number of signatures given difficulties her campaign encountered amid the early weeks of the coronavirus outbreak. The high court disagreed, saying only the legislature has the authority to adjust the signature requirements.

Warren, an immigrant rights activist and first-time candidate, told Colorado Politics after the ruling was announced that she ran to "raise the profile of issues" and stayed in the campaign "because there are people who felt the same way I did."

"In this race, we did the unthinkable," she said in a statement. "We took on D.C.-style politics as usual and activated a base of supporters across the state who are committed to strengthening the Democratic party from the bottom up, not the top down."

Added Warren: "While the ruling by the Colorado Supreme Court today was a disappointment, I will continue to do what I have done for years — fight for bold leadership that will level the playing field for our families to have an opportunity to succeed — no matter their gender, race, age, sexual orientation, or ZIP code." 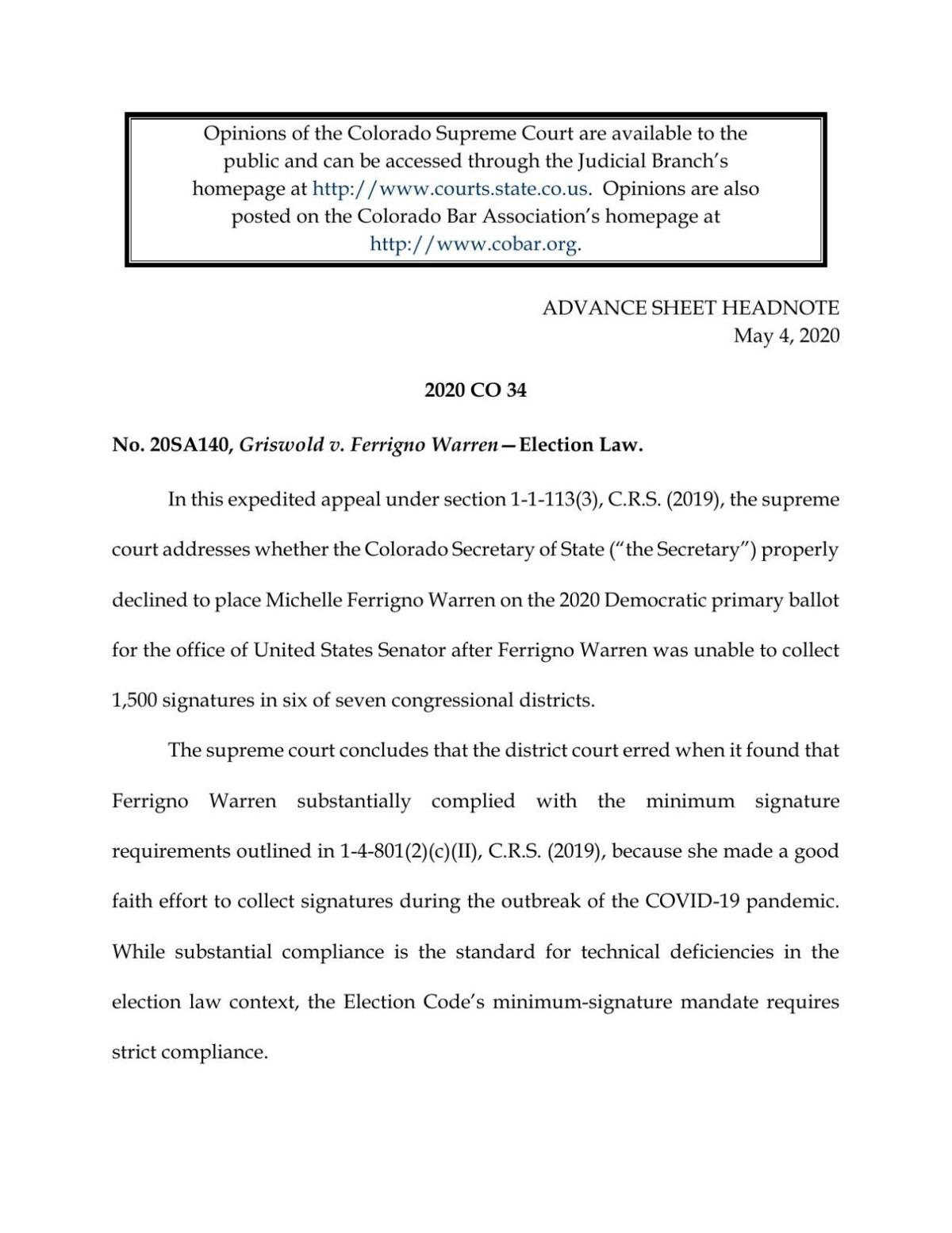 The unanimous decision sided with Secretary of State Jena Griswold, a Democrat, who asked the supreme court on April 24 to overturn the lower court ruling, though Griswold had proposed a formula to allow candidates with fewer than the required number of signatures to make the ballot.

In the earlier ruling, District Court Judge Christopher J. Baumann found that Warren "substantially complied" with state petition requirements, even though she only turned in 5,383 valid signatures out of the 10,500 specified in state statute — and failed to meet a requirement to collect 1,500 signatures per congressional district in six of Colorado's seven congressional districts.

Warren's circulators, the judge wrote, "had to collect petition signatures in the shadow of a global pandemic and looming public health emergency."

The Supreme Court, however, said that the judge lacked the authority to take the pandemic into account when determining whether Warren's petitions contained enough signatures.

“While we recognize that the circumstances that made signature collection more difficult this year are unprecedented, we do not have the authority to rewrite the Election Code in response to the COVID-19 virus," the justices wrote. "Only the General Assembly can do that.... In the absence of legislative change, even when a worldwide pandemic has changed so much, the minimum signature requirements are fixed."

Hickenlooper qualified for the ballot by petition, and Romanoff was the only Democrat to emerge from the party's caucus and assembly process.

Garcia, however, could find that her fate is tied to Warren's, since Garcia gained a spot on the ballot last week following a similar ruling by the same district court judge.

"Lorena Garcia is focused on her campaign and is on the ballot," a campaign spokeswoman told Colorado Politics in a statement. "The campaign appreciates Secretary Griswold’s understanding of how COVID-19 impacted the signature campaign and (is) grateful to her commitment to ensure fair access to the ballot during this difficult time. Garcia is moving forward and looking forward to the next phase."

In a statement issued late Monday, a spokeswoman for Griswold wouldn't say whether the secretary intends to appeal the ruling that placed Garcia on the ballot but noted that the secretary was weighing her options.

"The Secretary of State's office recognizes the challenges posed by the coronavirus, and believes our democratic processes must  remain accessible and fair during this trying time. We had hoped the Colorado Supreme Court would develop a uniform standard applicable to all similar cases that took into account the impact of coronavirus on candidate signature-gathering efforts," Betsy Hart, Griswold's communications director, said.

"In its ruling today, however, the Supreme Court upheld the law as it currently stands without incorporating the impact of coronavirus. The Supreme Court instead indicated that it is incumbent upon the legislature to make changes to existing law, despite the extenuating circumstances."

She added: "We are working with the Office of Attorney General to determine next steps on the Garcia case in light of the Supreme Court’s decision earlier today."

Spokespeople for Hickenlooper and Romanoff's campaigns didn't respond to requests for comment.

Griswold has until midnight Monday to appeal the Garcia ruling. She also faces a Thursday deadline to certify the primary ballot to county clerks, who start sending mail ballots to most Colorado voters on June 9.

Ernest Luning: "As has become customary in recent years, the deadline for election officials to certify Colorado's primary ballot is fast approaching, but the Secretary of State's Office can't forward the paperwork to county clerks until the courts have had their say."