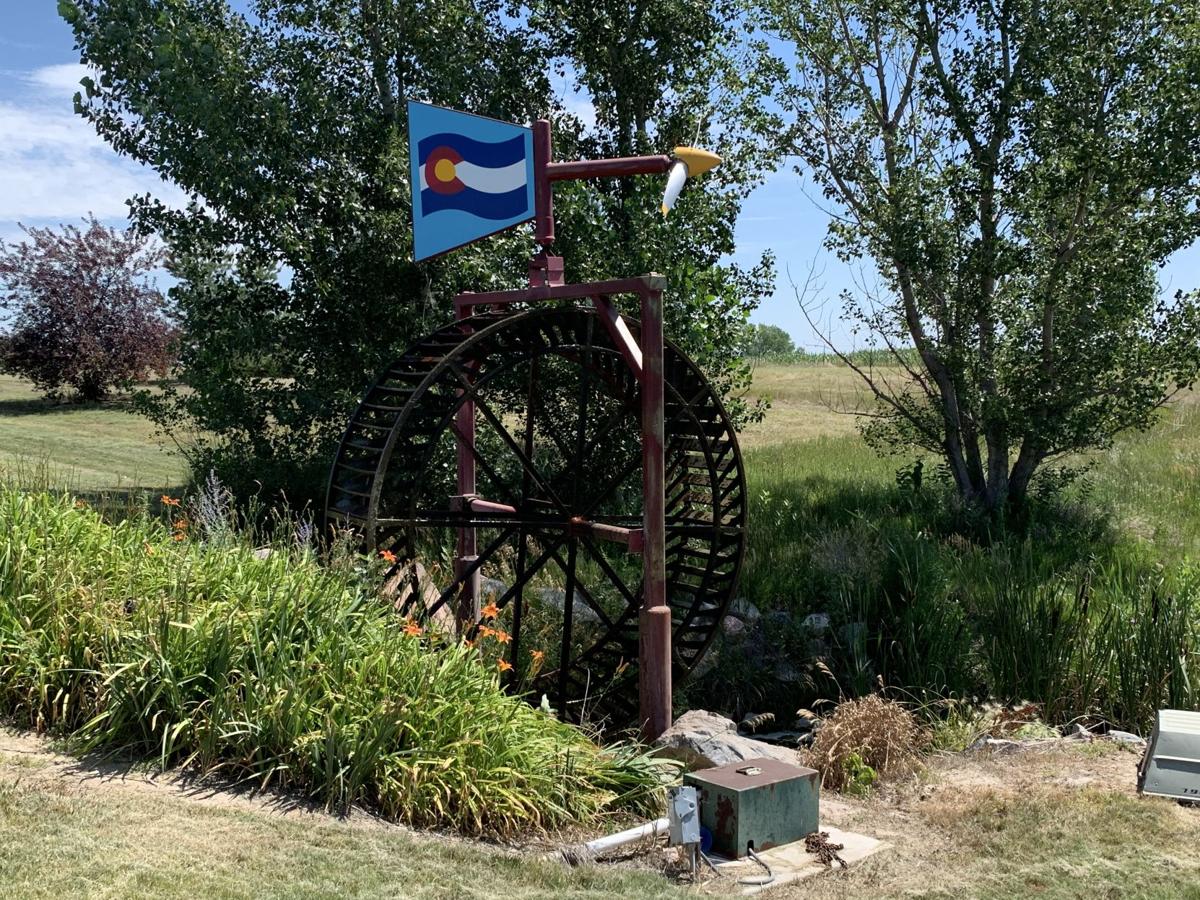 A water wheel on the Gentz farm in Sterling. 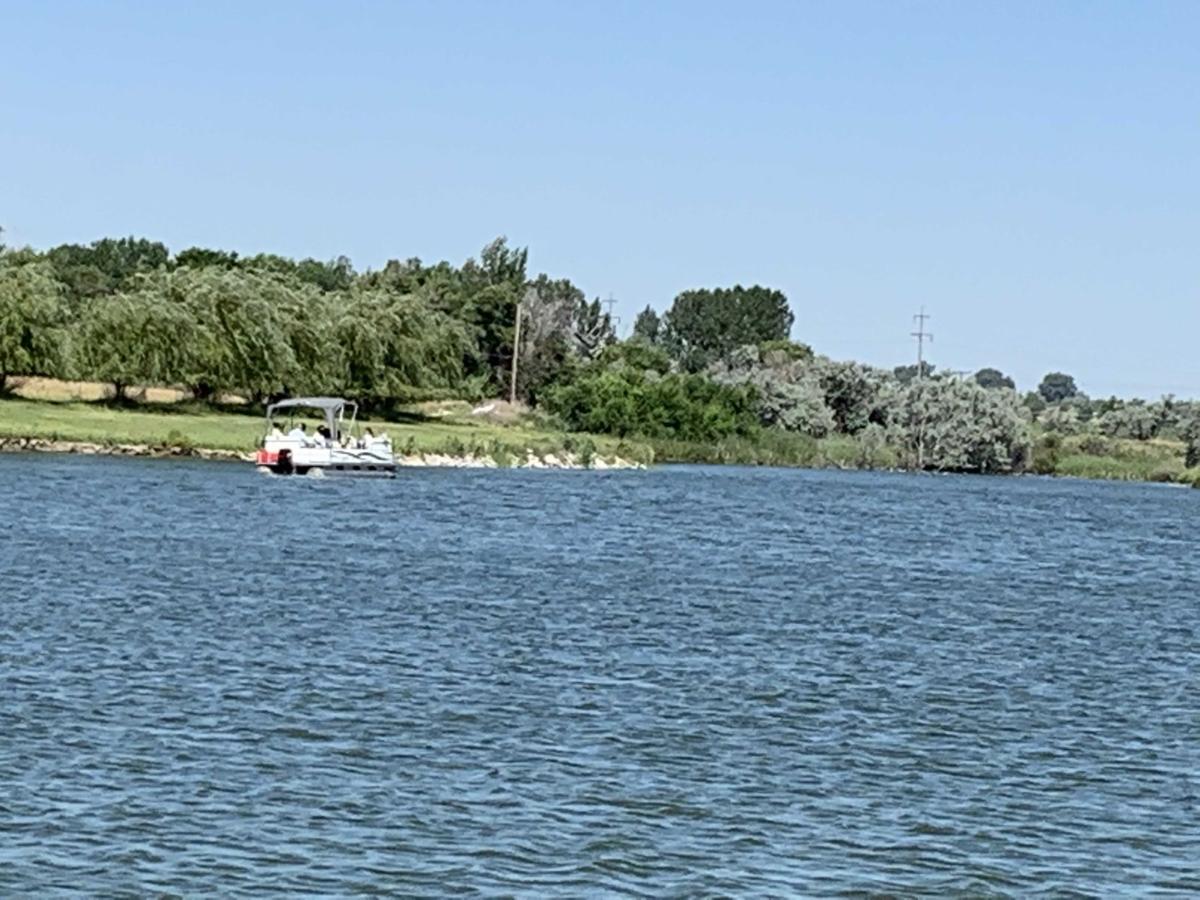 The lake on the Gentz farm, part of an easement that the Department of Revenue claimed had no value for conservation. 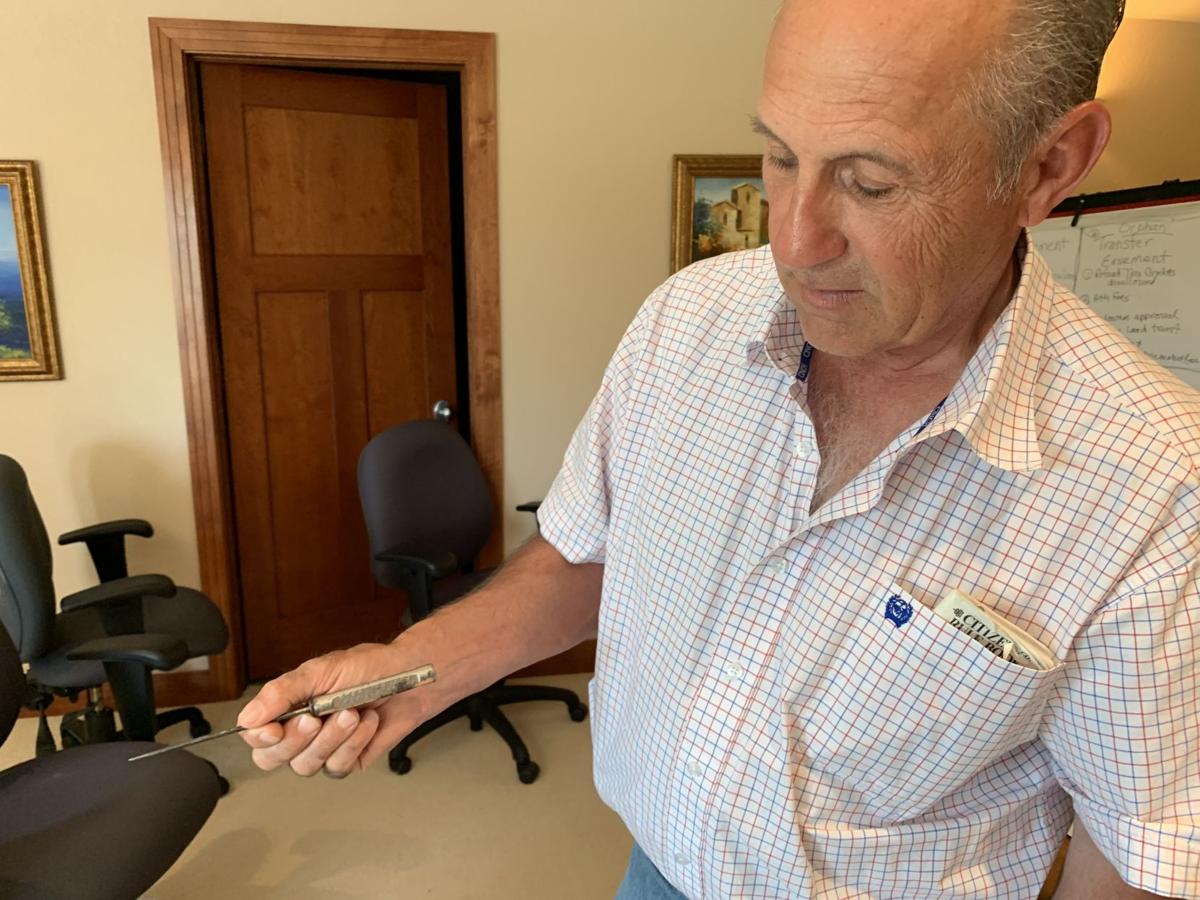 One of the ice picks from the original Sterling Ice House, from the early 1900s. Photo by Marianne Goodland, Colorado Politics. 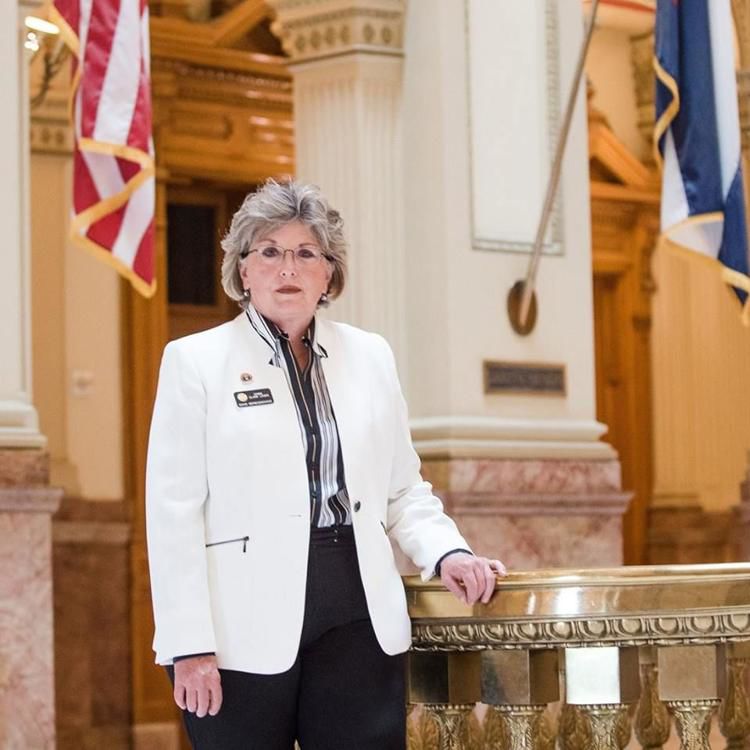 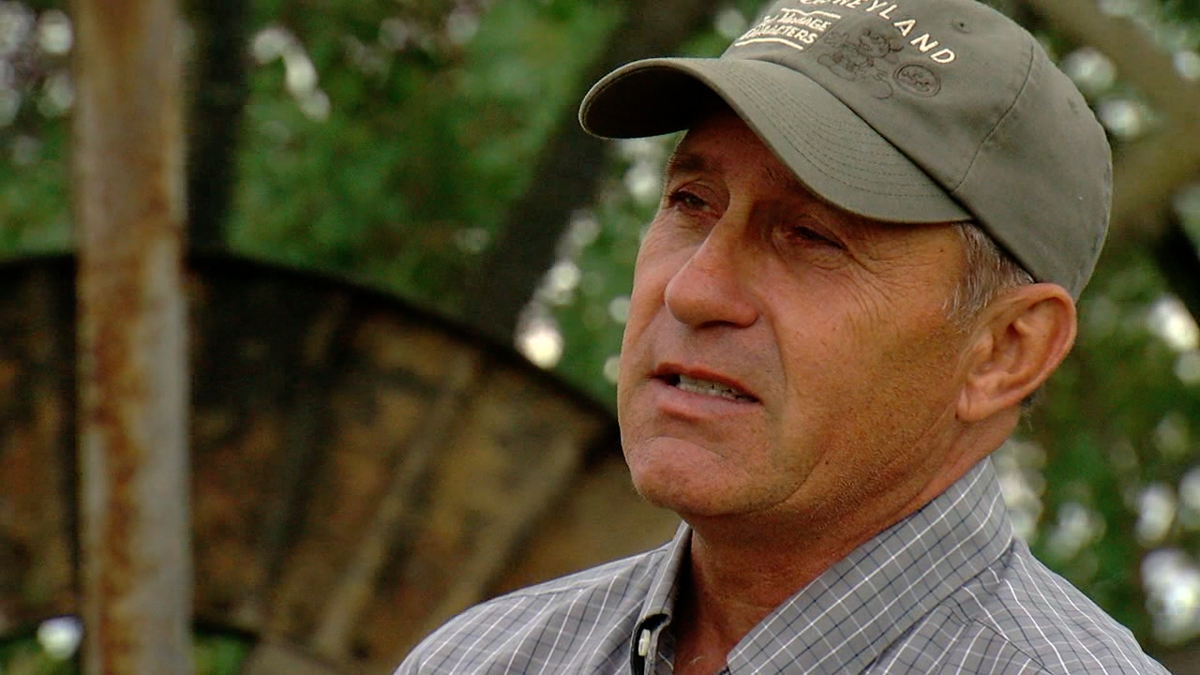 STERLING • A working group tasked by the Colorado General Assembly with coming up with a way to pay back millions of dollars in tax credits to landowners involved in the state's conservation-easements program got their first look this week at just how much that might cost.

According to the state Department of Revenue, the cost to refund tax credits for landowners who were denied those tax credits for donating easements limiting development of their land could reach more than $270 million, not including penalties and interest and attorneys' fees.

The tax credits for conservation easements were denied by the Department of Revenue mostly between 2003 and 2011, for easements donated to land trusts and local government entities.

A conservation easement works like this: a landowner donates development rights to a land trust or a local government for the purpose of preserving open space, and in exchange, the state grants a tax credit. The easement is in perpetuity, meaning the heirs are also bound by that donation, although the landowner technically continues to hold the title.

Under most conservation-easement agreements, that land cannot be developed for homes, oil and gas or any other development purpose.

Colorado's program was set up in statute in 1999, but problems began to surface in the mid-2000s. Those who claim they were harmed by the program say that 860 easements, out of a total of 4,420 granted in the program's 20-year history, were declared of no value and the offer of tax credits withdrawn.

That has forced landowners to settle, under what some claimed to be bullying tactics by the Department of Revenue and the Attorney General's Office. Landowners also have been sued by tax credit brokers, who bought the tax credits, often at a discount, in order to allow someone else with larger tax liabilities to use those credits. The cash would allow the landowners to pay off mortgages and other farm debt.

It's resulted in bankruptcies and foreclosures of family farms all over the state. In some situations owners who wanted to do the right thing in donating their land, instead found themselves selling off their farms to pay back the state for the tax credits tied to those donations.

Tuesday's meeting was held in Sterling at the home of Alan and Julie Gentz, who donated part of their farm to Logan County in exchange for tax credits.

The Gentzes received a tax credit for their two easement donations in 2006 and 2007, two plots of land that could accommodate up to 10 homes, with each of the 20 lots valued at around $45,000.

The Gentzes had intended to develop a part of their farm, given that home values in the area surrounding the property start at around $400,000. But the Department of Revenue came back in 2008, denying the credits as well as denying the Gentzes an opportunity for an appeal.

The Colorado Conservation Easement Oversight Commission also rejected the appraisals, led by then-board member Mark Weston, who now runs the easement program, and who originally told the Gentzes in a letter prior to 2006 that he recommended the property for easements.

Alan Gentz is one of eight appointed members of the conservation easement working group, tasked under House Bill 1264 with devising a way to pay reparations as well as what the state should do with orphan easements and whether an alternative method of valuing properties being considered for an easement would be possible.

Gentz told the working group and other interested parties, about two dozen total on Tuesday, that he wanted them to see his property, to see what an easement declared to be of no value looks like.

The working group spent the first hour touring the farm as well as taking boat trips around the lake included in the easement. The Gentzes also pointed out that the property routinely draws about 45 species of birds, including bald eagles that nest in the farm's trees; foxes, deer, muskrats and other animals.

The property once housed the first ice house in Sterling, and remnants of that operation are still visible, so there's also an historical element, he said, and retailer Cabela's has used the property as a backdrop for its brochures.

"We are pro conservation, not pro havoc," Alan Gentz said.

The issue of reparations is taking on potential new urgency. Earlier this year, a Denver District Court dismissed a lawsuit against the state filed by Landowners United Advocacy Foundation (LUAF), which includes some of the aggrieved landowners.

In its decision, the court said the defendants, which included Weston and the head of the Division of Real Estate, were no longer subject to the lawsuit because the state had changed who ran the program. However, attorney Blair Dunn, representing LUAF, spoke to the working group Tuesday about an appeal to the Colorado Court of Appeals.

The group has filed its brief, Dunn said, with a response from the state expected next month. The case could be headed to trial by October. That means a decision could come down sometime in early 2020, Dunn estimated.

There's been some other developments as well, Dunn told the group. One is a decision in June from the U.S. Supreme Court that dealt with a Fifth Amendment right to sue when the government takes someone's property without just compensation.

A judgment in favor of LUAF could mean the state would have to come up with hundreds of millions of dollars to repay tax credits, all in one lump sum, instead of one option the group might propose, something akin to an annuity, with refunds issued over several years.

Dunn suggested the state should have to prove which appraisals were erroneous. Out of the 4,420 easements, only two people associated with those easements were later prosecuted for fraud, with one conviction.

One subgroup, tasked with the reparations issue, came up with two options for dealing with the tax credits. The first would deal with those landowners who did not use federal tax credits, which were also granted along with the state credits.

Landowner Jiliane Hixson of Lamar has her own tale of dealing with the easement program. Her farm was on the brink of foreclosure in 2003 after years of drought. The tax credits she obtained from an easement were sold through a tax broker and the cash allowed her to pay off farm debt.

"No trips to Disneyland or Europe. Nothing can account for the pain and suffering" of that experience, she told the group. "We were trying to do the right thing to save the family farm," which had been in her family for four generations.

"The words 'conservation easement" triggers PTSD. This horror is 15 years of my life."

According to Republican state Rep. Kimmi Lewis of Kim, who is not on the working group but who attended Tuesday's meeting, 80 percent of the 860 easements where tax credits were denied are in her district in southeastern Colorado.

For landowners who did not use the federal tax credits, one option would be to extinguish, or eliminate, the easement and the land would go back to the landowner with clear title. The state would still need to cover the setup costs and possibly attorneys' fees under this option.

But extinguishing easements drew concerns from representatives of the land trusts, including Matt Moorhead of The Nature Conservancy. Such a proposal would undermine conservation easements all over the country, he told the group.

"This is a cash solution. Let's deal with the finances upfront," he said.

It also would likely take a court order to extinguish easements, and that isn't palatable to some landowners, who are tired of going to court over this issue, according to Alan Gentz.

Attorney Jessica Jay, who works on conservation easement agreements, said that in order to persuade a court to extinguish an easement, the landowner has to prove that conservation won't work on the property, which she called a "very high bar."

Republican state Sen. Larry Crowder of Alamosa, while not a member of the working group, also advised the group on what would be workable in future legislation, which is where the working group's recommendations are likely to find a future home.

Option two is to refund the tax credits, along with reparations to cover any penalties and interest paid. The easements would stay in the hands of the land trusts or local governments. Under that option, only landowners would be entitled to reparations in the form of of a refund, leaving open the question of how the state would deal with the tax brokers, some of whom also lost money tied to discounted tax credits.

A second group began discussions on what to do with so-called "orphan" easements. That's when a land trust or other entity holding an easement goes out of business. Given that easements are donated in perpetuity, an orphan easement becomes abandoned and in some instances not properly maintained.

According to Jay, there are at least 200 easements that no longer have a land trust at the other end of the agreement.

One of the ideas proposed for legislation would be to require the state to develop a holding company that would take over orphan easements until they can be transferred to another entity. That transfer would require landowner approval, according to the group's discussion.

The third subgroup, on alternative valuations, raised the question of whether the state actually needs a new way to value easement property. Currently, appraisals are based on fair market value. Moorhead noted that the program needs to have certainty about the amount of state tax credits when someone is exploring whether to put land into an easement.

The group's next meeting is Sept. 16 in Steamboat Springs, and another slated for Oct. 24 in Lamar. Subgroups are scheduled to hold phone conference calls in the coming weeks.

The working group is expected to come up with recommendations for legislation in the 2020 session.

None of the sponsors of HB 1264, who might be expected to carry that 2020 legislation, have attended any of the working group's meetings to date.

"As messy as this is, this is the only way to make this work," Moorhead said at the meeting's conclusion.

Farmers and ranchers hope to get reparations for overturned conservation easements