The defendant is the Colorado Division of Insurance and Insurance Commissioner Michael Conway.

According to the lawsuit, on Dec. 25, the division issued emergency draft rules for the reinsurance program intended to assess a $40 million fee to hospitals. Hospitals would have to choose a payment method for their portion of the fee by Jan. 15, according to the draft rules.

The Colorado Hospital Association (CHA) asserted that the emergency regulation, which they claim went into effect just one week after the draft rules came out, violates the state’s Administrative Procedure Act (APA), which governs how state agencies craft rules, and the state’s reinsurance program as contained in House Bill 19-1168.

The fee would have to be paid by June 30, although the reinsurance law only allowed the commissioner to assess the fee for fiscal years 2020-21 and 2021-22. That would mean the hospitals would start paying the fee on July 1 instead of June 30.

That may seem like hair-splitting — just one day — but there’s an important distinction. The lawsuit claims that assessing the $40 million fee by the end of fiscal year 2019-20, June 30, might avoid triggering a refund under the Taxpayer’s Bill of Rights (TABOR) tied to the reinsurance program.

And hospitals that don’t pay could see their licenses yanked for non-compliance, an authority that the CHA says the division doesn’t have and was never granted either under the reinsurance law or any state law.

Julie Lonborg, senior vice president, communications for CHA, told Colorado Politics that putting out the rule on Christmas Day made it impossible for member hospitals to even call and ask about the rule. "You take (those notices) seriously," Lonborg said, given that the consequences as laid out in the rule are quite serious. 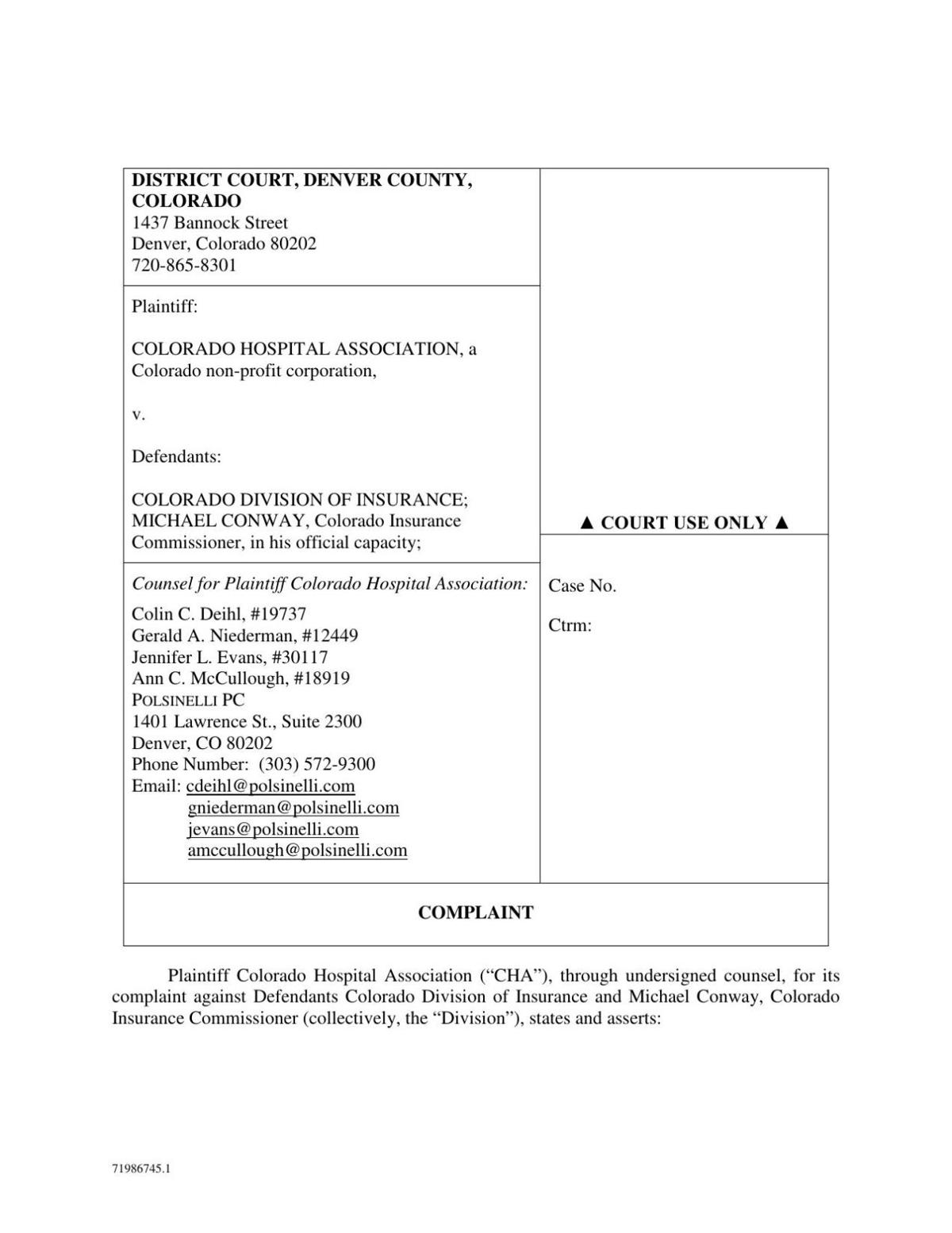 The Division of Insurance, in a statement, said that usually “the division cannot comment on the substantive details contained in the lawsuit as it is now ongoing litigation.

“However the division is disappointed that the Colorado Hospital Association has taken this step, clearly motivated by protecting their bottom line. CHA is, unfortunately, attacking a program that is working and will save Coloradans thousands of dollars this year on their health care. The Division of Insurance stands ready to defend the program so that Coloradans can finally stop being ripped off on health care.”

The law allows the state to assess the $40 million "special fee," the lawsuit pointed out. CHA member hospitals are required to pay the fee from general revenues and are barred from passing it on to consumers. But the lawsuit claims that since member hospitals set their budgets well before the end of 2019, that’s “short notice” for them to adjust those budgets.

The division maintains that the emergency regulation around the fee is still just a draft, has not been finalized and has not been put into effect. While the notice filed with the lawsuit says it goes into effect on Jan. 1, the document is also marked as a “draft.”

The lawsuit claims that CHA member hospitals asked for, and waiting for months, for the Division of Insurance to come up with the rules governing the fee, beginning when the law was signed last May.

Despite those requests, the division did nothing, the lawsuit claimed, despite the fact that the law required the division to assemble a stakeholder group that would figure out how the fee would be implemented. And once the Emergency Regulation was published on Christmas Day, the Division emailed a notice to the CHA for comment that was due on Jan. 3, two days after the regulation was due to go into effect.

Hospitals also have no idea how much of the $40 million fee each is responsible for, the lawsuit stated.

Lonborg pointed out that the CHA is not opposed to reinsurance. The CHA took a neutral position on the bill during the 2019 session.

In addition, "We know we owe the $40 million for the two years. The fiscal note, however, said the payments weren't to start until July 1," Lonborg said. "Our issue is the timing, not whether we should pay it. The governor has cited lots of reasons why we might be challenging this. The real answer is we don't believe they're complying with the law, and that's what we're asking the Court to fix."

The CHA seeks an injunction to block the implementation of the emergency regulation and to force the division to accept the timeline laid out in HB 1168, which means payments would start on July 1 or later. They also want the court to block the division from suspending or revoking the licenses of hospitals that do not comply with the emergency regulation.

The reinsurance program, touted by Gov. Jared Polis in his first State of the State address last year and by lawmakers from both parties during the 2019 session, has led to a 20% reduction in health insurance premiums statewide for those who purchase their health insurance on the individual market. But the program’s costs to the state have become an issue.

Joint Budget Committee staff last month issued a briefing that said the program would cost the state $184.6 million more than was originally projected when the bill went through the 2019 General Assembly.

The Polis administration, ably assisted by legislative Democrats in 2019, did a lot of spending, and 2020 may turn into the year when the bills come due.