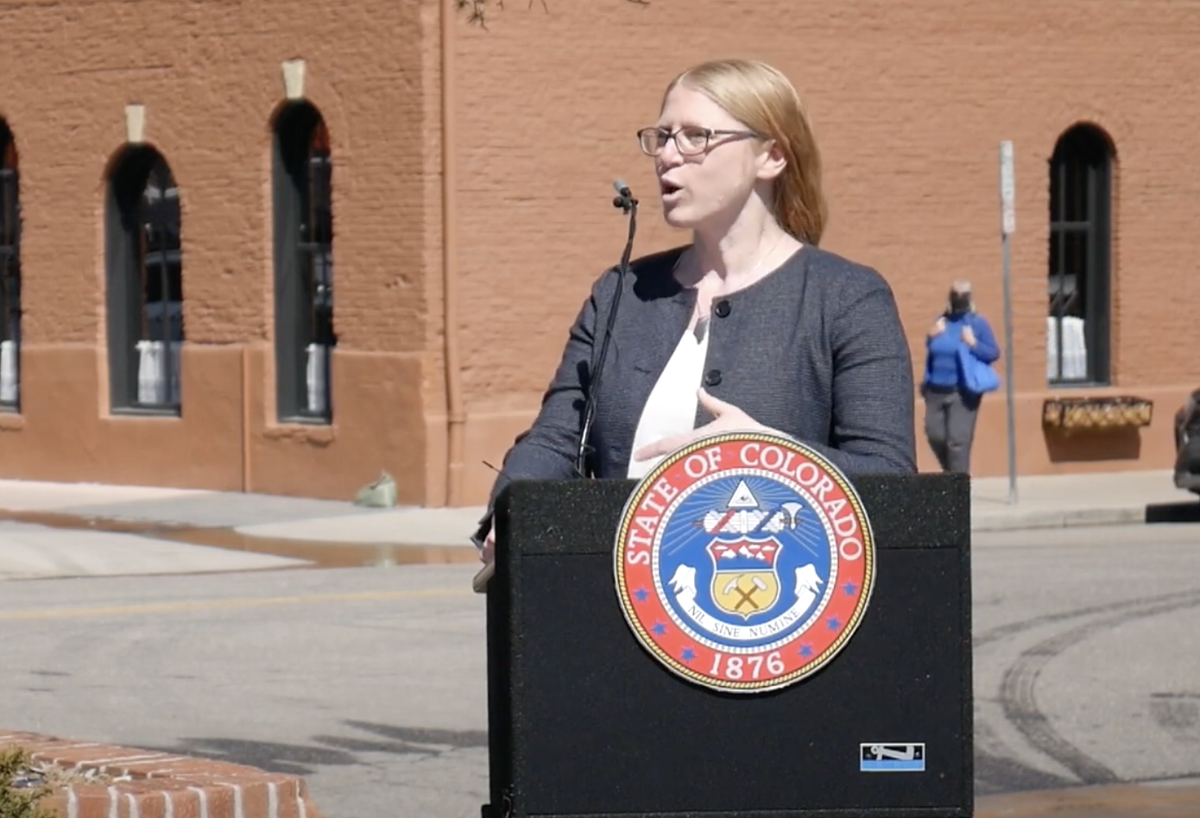 Shoshana Lew, director of the Colorado Department of Transportation, speaks at a ceremony to sign House Bill 110 to fund safe revitalization of main streets in Golden on Friday, March 19, 2021. 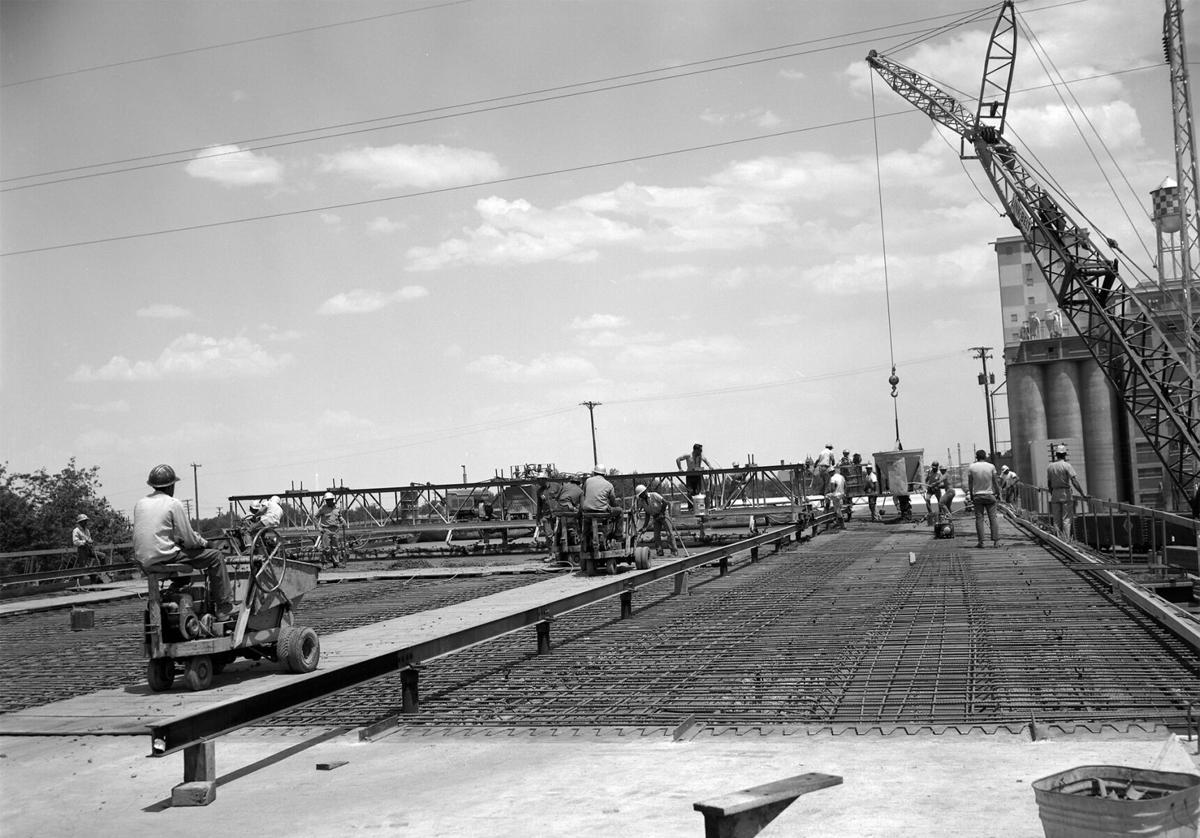 Crews build the deck of the Interstate 70 viaduct near the Purina plant in 1963. (Photo courtesy of CDOT)

Shoshana Lew, director of the Colorado Department of Transportation, speaks at a ceremony to sign House Bill 110 to fund safe revitalization of main streets in Golden on Friday, March 19, 2021.

Crews build the deck of the Interstate 70 viaduct near the Purina plant in 1963. (Photo courtesy of CDOT)

A calculation on how much new lanes of interstate add in cars and gas use quickly got jammed again after the costly expansion didn't add up to state highway director Shoshana Lew.

The Rocky Mountain Institute hopes its analysis, released Wednesday, will add to the conversation about how to spend federal stimulus dollars on transportation.

RMI and CoPIRG, the Colorado public interest group, want those dollars to go to mass transit and local alternative routes to travel.

The report identified potentially 176 more miles of new lanes that could be added across the state in the next 10 years, listing the projects with expected mileage of new asphalt.

Transit advocates measure the impact of investing in roads

Colorado stuck at a crossroads: Leaders look ahead on gridlocked finances and politics around transportation

That was Wednesday morning. Lew sent a letter to Danny Katz, the executive director of CoPIRG, saying she wished she'd had more time and input, learning about the report the day before.

"As such, it concerns us that today’s report, which appears to be based on a generic calculator tool developed in California, did not cross check against the specifics of CDOT’s projects or the modeling analysis we are developing in support of project review documents. The report appears to look only at a simple calculation of lane mileage, omitting a broad range of other factors pertinent to traffic modeling that affect vehicle miles traveled, mitigations, and the geographic nuances of individual projects," she said. "Taking any single variable out of context tends to lead to misleading conclusions that fail to reflect the full costs and benefits of a more comprehensive project."

Lew went into more detail in her letter, which is attached to this article.

RMI said the report it used a calculator developed at the University of California - Davis calculated the estimate based on DOT numbers.

The state should invest, advocates contended, in more reliable and more frequent bus service in the short term and support mass transit long-term, including commuter rail, to get vehicles off the road, the proponents argued.

"If we can get more people moving without of cars, it's going to have a lot of benefits in a lot of ways," Katz said earlier Wednesday. 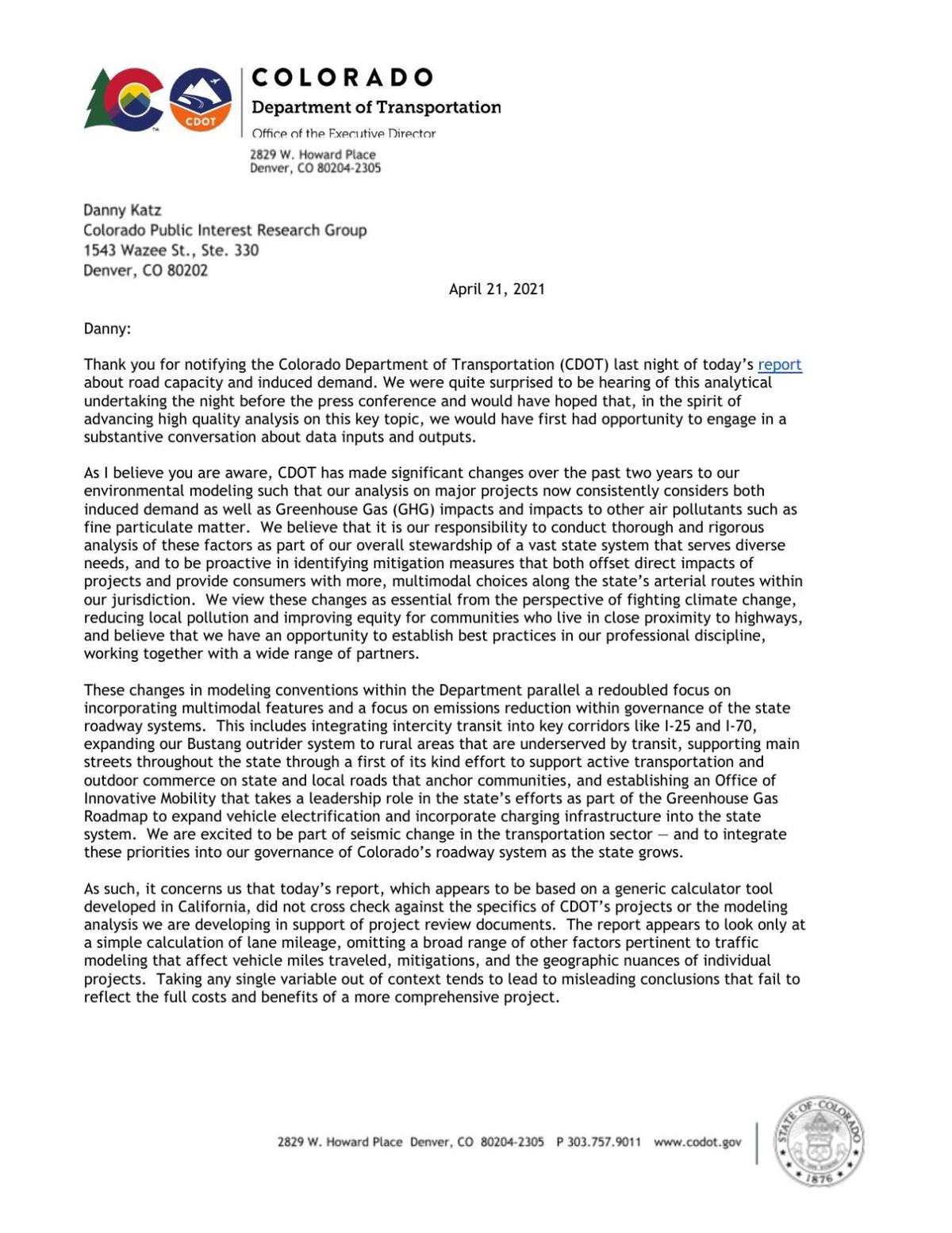 "The plot points and modalities they are seeking all require investment in roads," she said. "Congestion mitigation has a benefit to the larger goal of greenhouse gas reduction. Roadway investment is actually an environmentally smart approach to improving air quality."

"The plot points and modalities they are seeking all require investment in roads," she said. "Congestion mitigation has a benefit to the larger goal of greenhouse gas reduction. Roadway investment is actually and environmentally smart approach to improving air quality."

The calculator leaves out a lot of nuance, mitigation and the reality of fixing chokepoints that primarily cause traffic jams, not add vehicles, according to the Colorado Department of Transportation leader.

"Models that include induced demand should also factor pollution from sitting in traffic to have accurate pros/cons," Lew wrote to Katz, adding: "Both need to be included to accurately assess net impact. For us to assess the accuracy of the new model, we would need to fully understand how it incorporates sensitivities that are key to accurate traffic modeling."

She indicated to proponents of transit that CDOT shares many of their goals.

"We view these changes as essential from the perspective of fighting climate change, reducing local pollution and improving equity for communities who live in close proximity to highways, and believe that we have an opportunity to establish best practices in our professional discipline, working together with a wide range of partners," Lew wrote.