Coloradans who participated in a 12-day whirlwind tour of the state by elected officials had lots of ideas on how Colorado should spend an expected $3.9 billion federal windfall expected later this year.

The tour, known as the "Build Back Stronger Colorado" tour, was initiated by Gov. Jared Polis and legislative leaders. Although Polis announced in-person stops in Pueblo and Grand Junction, the majority of the "tour" was conducted via Zoom. The tour was divided into seven statewide regions,  drawing input from 10 specific focus areas, including  Asian-Americans, Latinos and African-Americans; child care; rural and agricultural interests; clean energy and conservation; local governments and healthcare.

According to a report on the listening tour, the money should target public health, economic relief and recovery for households and businesses, revenue backfill and infrastructure.

Lawmakers at the state Capitol are already in discussions on their spending priorities , although it's unlikely those plans will be ready before the session adjourns, tentatively planned for May 28 or perhaps the week after.

The report said common themes that came up in almost every Zoom meeting in response to those questions included:

So what should Colorado look like after $3.9 billion in spending?

"Colorado will have the most robust and competitive economy in the country. Measured by traditional metrics and from an equity lens that ensures our bottom quartiles are brought along and not left behind," read a comment from chambers of commerce and economic development councils. Rural Coloradans suggested the state "has to promote an image of an Ag friendly state that has its arms open to our Livestock and Farm Commodity industries" as well as vibrant rural economies.

From Latinos, a request for more "Latinx students" in higher education, earning more degrees and with less debt, access to broadband services in rural areas, and  for students  to leave higher ed feeling hopeful and successful.

African-American Coloradans asked for a narrowing of wealth and homeownership gaps. "Housing cost burdens will be stabilized especially for renters," the report reads. "Incarceration gap and inequities addressed."

The American Rescue Plan, signed by President Joe Biden on March 11, is expected to send $3.9 billion to the state, to be spent on pandemic recovery efforts and as appropriated by state lawmakers.

Specific guidelines on how the money should be spent are required under the law to be issued within 60 days of the bill's signing, meaning no later than sometime next week.

Once those guidelines are issued, the U.S. Treasury would send them to Colorado's state controller, who would issue a certificate of need telling  the federal government that Colorado would accept the money. It's still unknown whether that $3.9 billion would come in one  disbursement or in two annual disbursements, with the first to be issued within 60 days of when the certificate is received by the Treasury.

The listening tour was conducted between March 28 and April 9, facilitated by the Keystone Policy Center, a go-to for Democrats on policy issues. The report did not identify total attendance but said that many of the Zoom sessions had at least 125 people each, with close to 200 in some sessions. 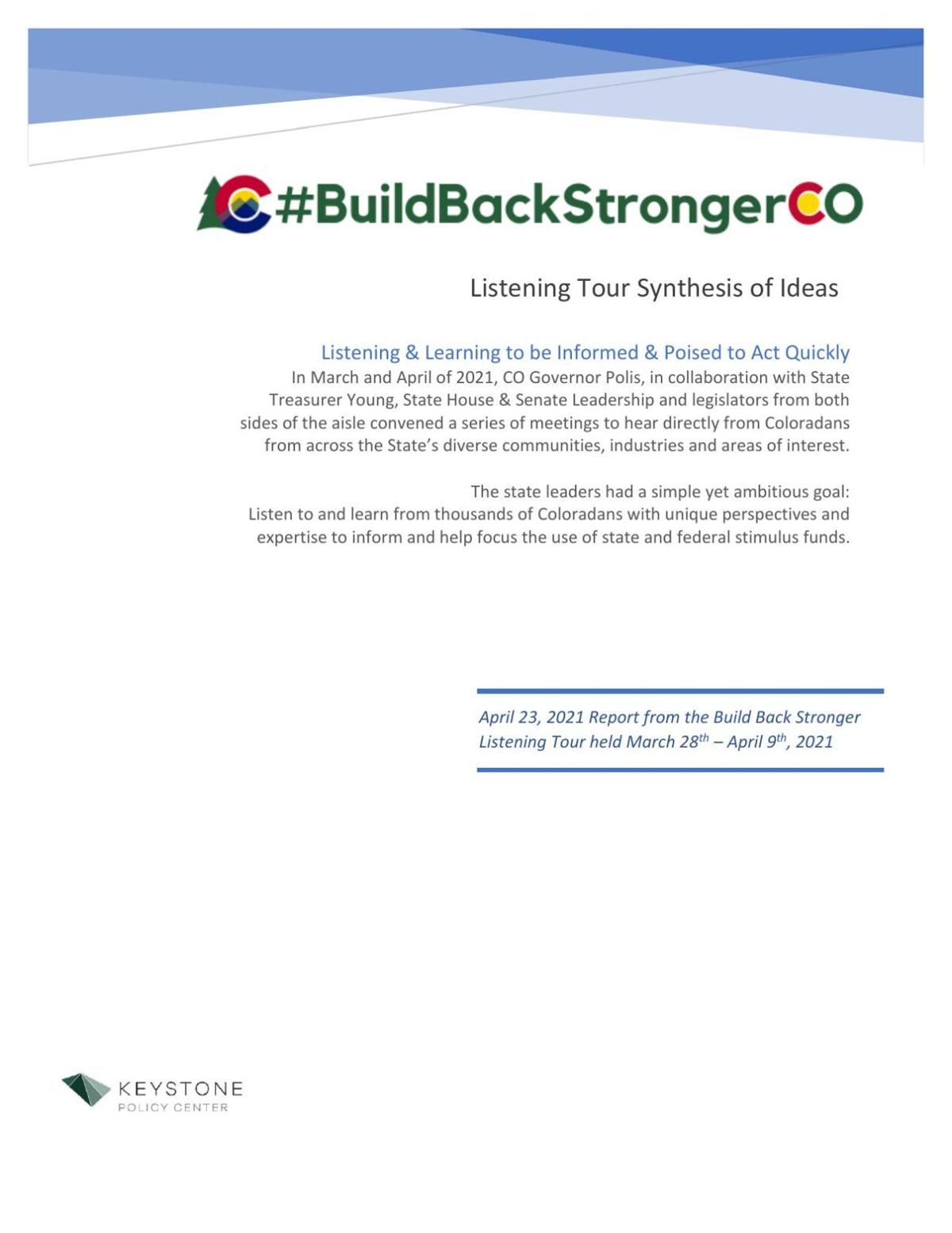 The statewide tour, to be known as the "Build Back Stronger Statewide Listening Tour," will be primarily focused on $3.9 billion in federal stimulus funds, according to state leaders at a Monday press conference.