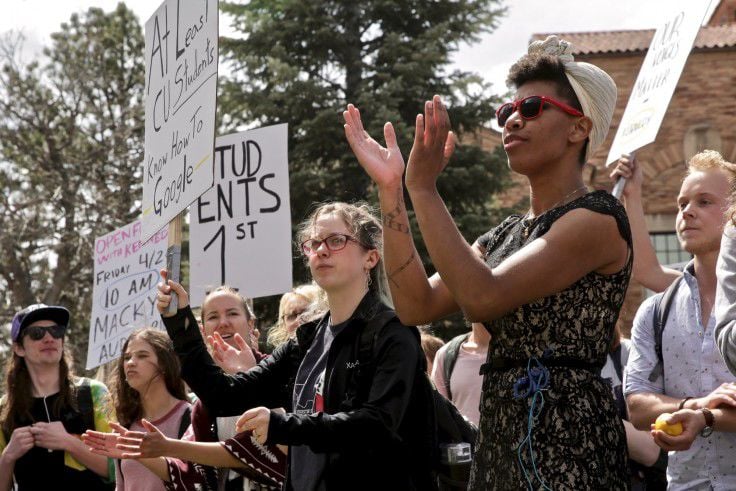 Protesters opposed to the possibility of Mark Kennedy being named the next president of the University of Colorado gathered in front of Norlin Library on the CU Boulder campus Monday, April 15, 2019. 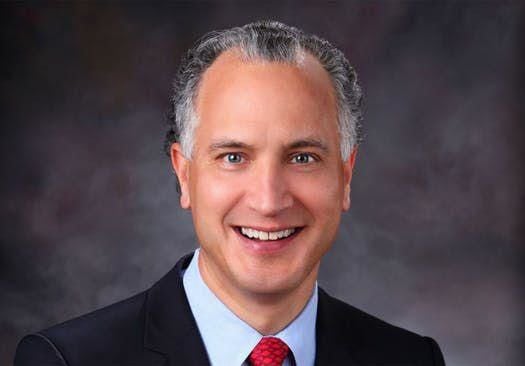 The Colorado Board of Regents unanimously chose University of North Dakota President Mark Kennedy as finalist to preside over the University of Colorado.

Mark Kennedy, the sole finalist for the position of University of Colorado system president, is defending himself against claims that his views on abortion and marriage equality will affect his ability to guide the system.

“I’m going to be a champion for welcoming all to the university,” Kennedy said in an interview with CPR News' Colorado Matters.

The selection of Kennedy, a former Minnesota congressman and the current president of University of North Dakota, has sparked backlash from students and faculty.

Critics have pointed to his Congressional voting record on gay marriage, abortion and stem cell research, as well as conflicts during his final year in North Dakota.

This story was produced by CPR News and is used by permission. CLICK HERE for the story on the CPR News site, including additional photos and Ryan Warner's interview with Kennedy. CLICK HERE for more CPR News reports and programs.

Regarding marriage equality and LGBTQ rights, Kennedy said his views have shifted in the intervening decade.

“I am committed to respecting the dignity of each individual student, faculty, staff, members of the community,” he said. “They'll have the full support to do whatever we can to get them to graduation, make them feel welcome on campus. And I will do that no matter who they love or how they identify.”

He promised that whatever his views on abortion and stem cell research, ongoing research would not be affected and that the university’s prominence as a research institution would be one of his top priorities as leader.

“Academic freedom protects that for faculty,” he said.

The hiring process that lead to his nomination has drawn scrutiny. In a letter released Monday, the CU faculty council, which represents all four campuses, critiqued the lack of a diversity officer on the hiring committee.

“This left the committee without a member with the specific training and knowledge that best practices in Diversity and Inclusion require us to have on search committees,” the letter reads.

The letter also called on him to commit to upholding the school’s commitment to an inclusive environment and to conduct comprehensive school climate surveys if hired.

In response, Kennedy pledged to foster “a climate of equity and inclusion for all members of the university community” and pointed to his record of conducting similar surveys while at the University of North Dakota.

On Monday, roughly 75 students gathered on the CU Boulder campus to protest his nomination.

“I don't feel safe with him being on campus, nor do any of my other friends or classmates, having a man that we know actively went against our rights,” said Naya O’Reily, a student in environmental studies and a leader in the school’s LGBTQ community.

Several students expressed concerns over whether he could commit to CU for the long haul. He previously applied for the president's job at the University of Central Florida after serving less than two years at UND.

“As someone with no ties to Colorado, I’m not sure if CU is something he actually cares about or is this his next stepping stone,” said Johnnie Nguyen, a first-year law student.

Kennedy told Colorado Matters he hoped CU would be the “capstone” to his career in academia.

Others on campus expressed ambivalence, not opposition, saying they’d wait to hear more on how his stances on higher education.

“Society has come a long way,” freshman Graham Tate said. “We can move along and move on from our old views.”

“It wasn’t long ago that most Americans, including Barack Obama and Hillary Clinton, were against gay marriage. People shouldn’t be punished for changing their mind and getting on the right side of history,” Connelly said.

While at UND, Kennedy received high marks on annual performance reviews for helping the school navigate faltering state funding support, increasing graduation rates and diversifying the student body. He also occasionally ran afoul of local critics over budget cuts and with a donor over the question of the university’s logo in the UND basketball court, the Denver Post reports.

Kennedy will tour all four university campuses next week and meet with students, staff and faculty. The CU board of regents is expected to vote on his hiring in early May.

Polis to CU: 'Find a candidate that unites'

Gov. Jared Polis has weighed in on the controversy over the selection of University of North Dakota President Mark Kennedy as finalist to lead…

Mark Udall, a former U.S. senator from Colorado and Boulder congressman, called Monday for the University of Colorado to reopen its search for…

“The University of Colorado deserves the best,” said Nguyen, the son of Vietnamese refugees and the first member of his family to graduate high school, college and law school.