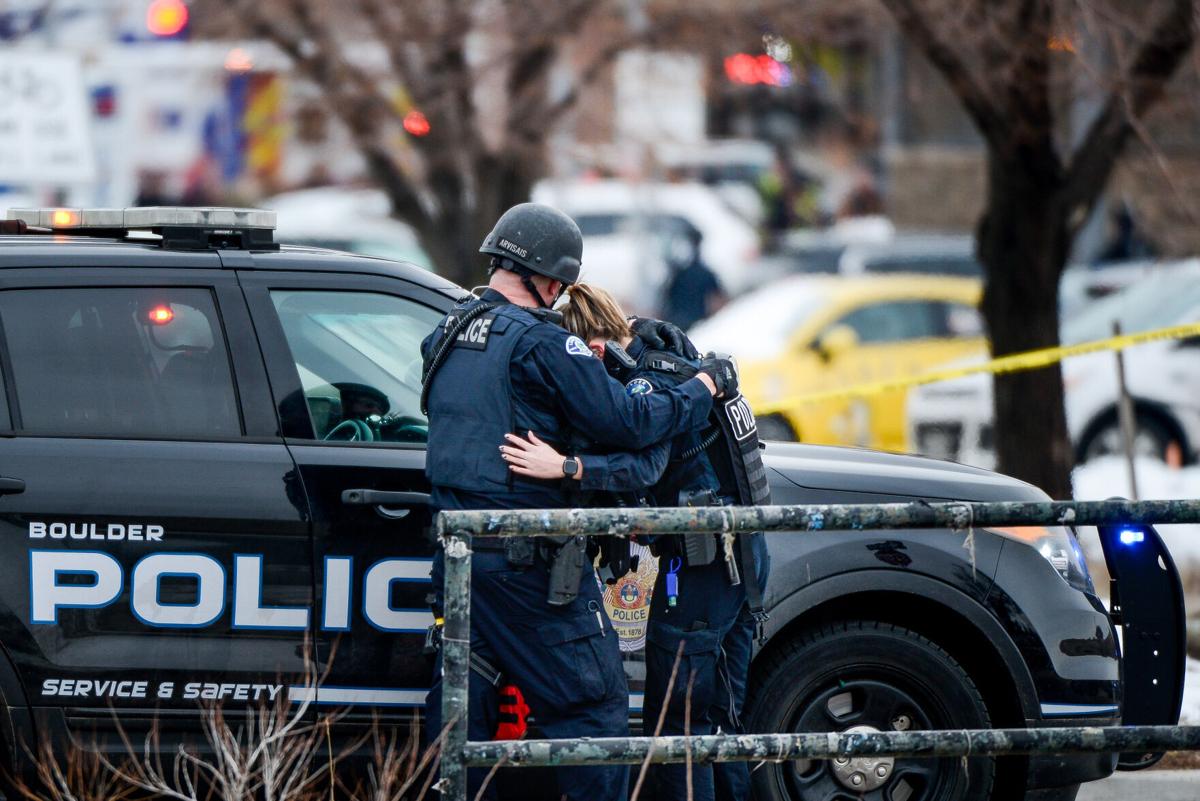 A Police officer hugs a fellow officer as they respond to a shooting at a King Soopers on Monday, March 22, 2021 in Boulder, Colorado. (Michael Ciaglo/Special to The Denver Gazette) 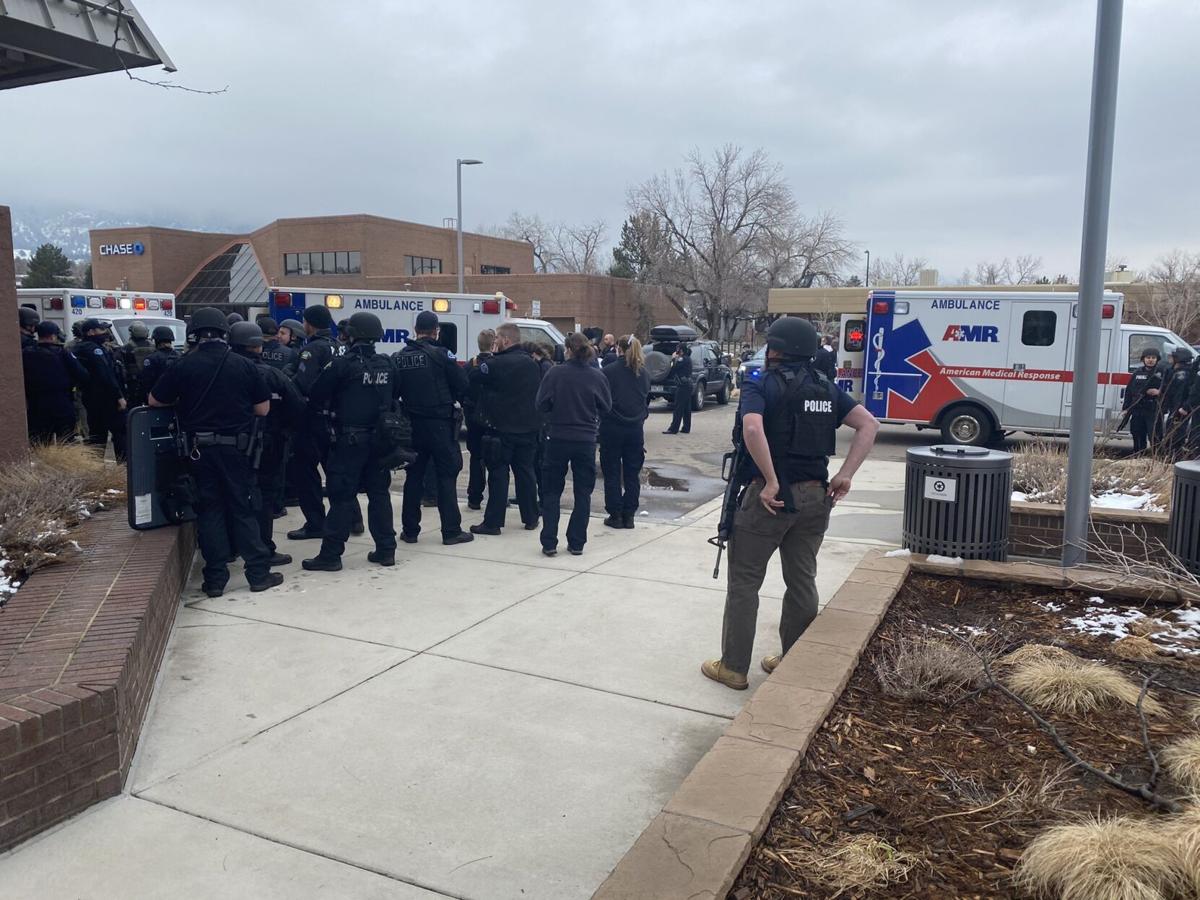 Law enforcement officers stand outside of a King Soopers in Boulder where an active shooter was reported Monday afternoon. 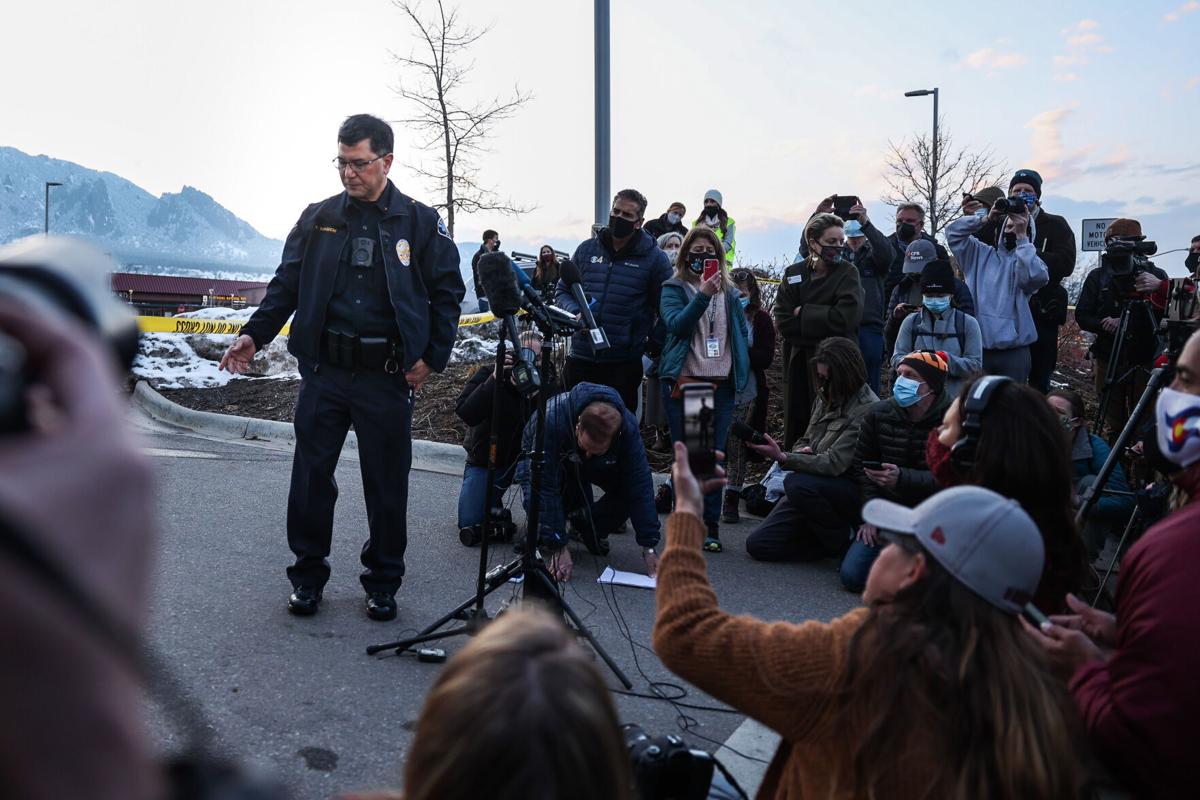 Boulder Police Department commander Kerry Yamaguchi speaks to the media as police officers respond to a shooting at a King Soopers on Monday, March 22, 2021 in Boulder. (Michael Ciaglo/Special to The Denver Gazette) 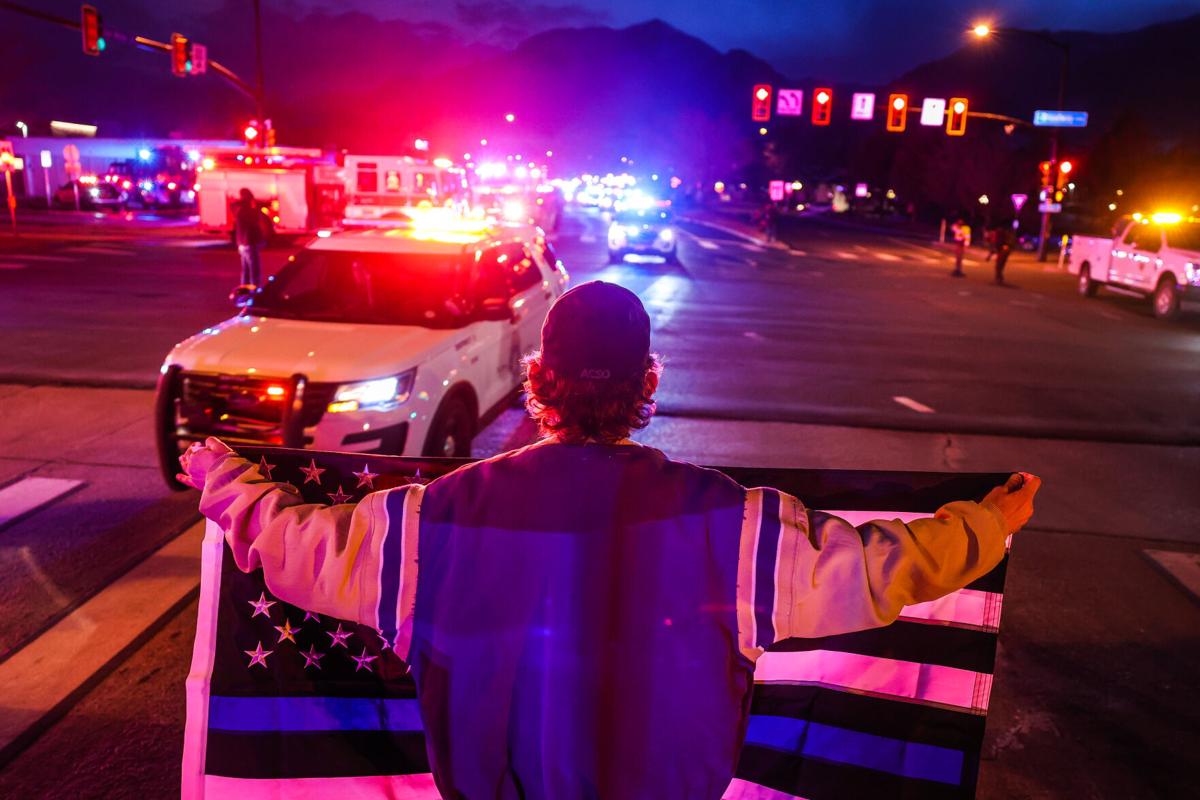 A man holds a thin blue line flag as emergency vehicles escort the body of a slain police officer from the scene of a shooting at a King Soopers on Monday, March 22, 2021 in Boulder. Ten people were killed in the shooting. (Michael Ciaglo/Special to The Denver Gazette) 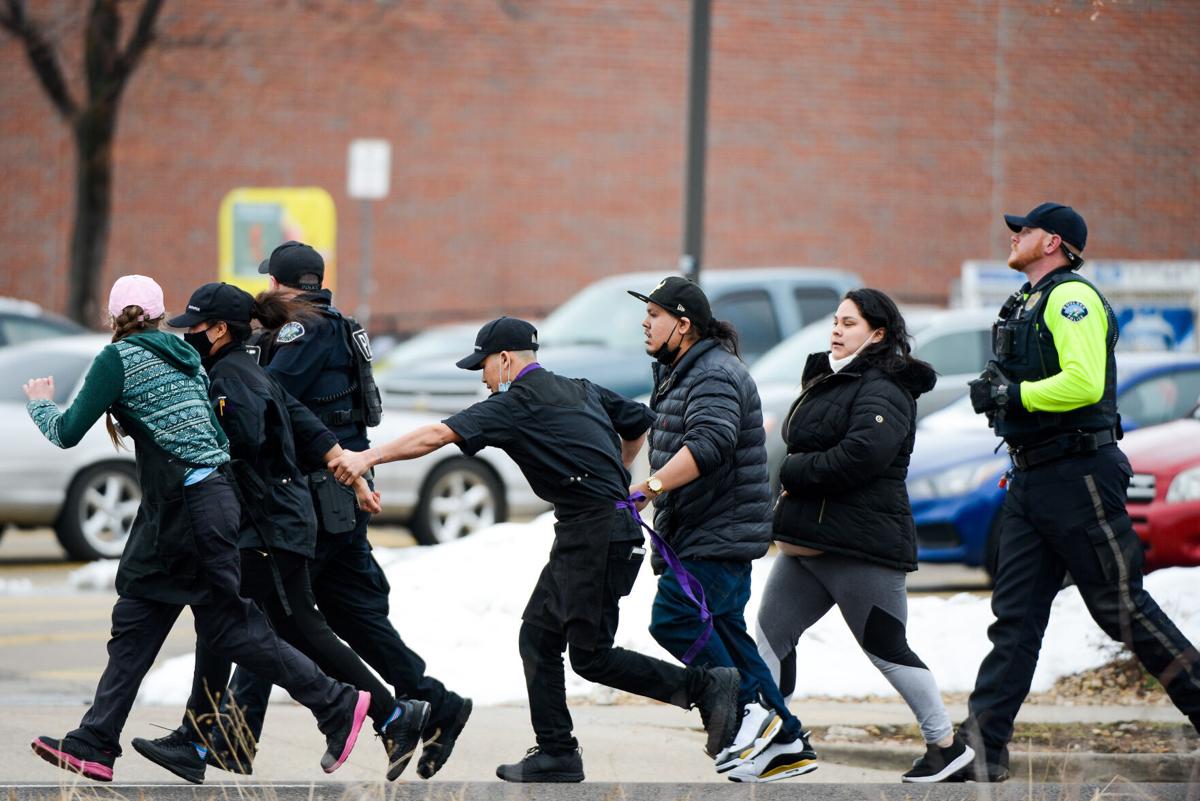 Police officers lead a group of King Soopers employees away from an active shooting at the grocery store on Monday, March 22, 2021 in Boulder, Colorado. (Michael Ciaglo/Special to The Denver Gazette) 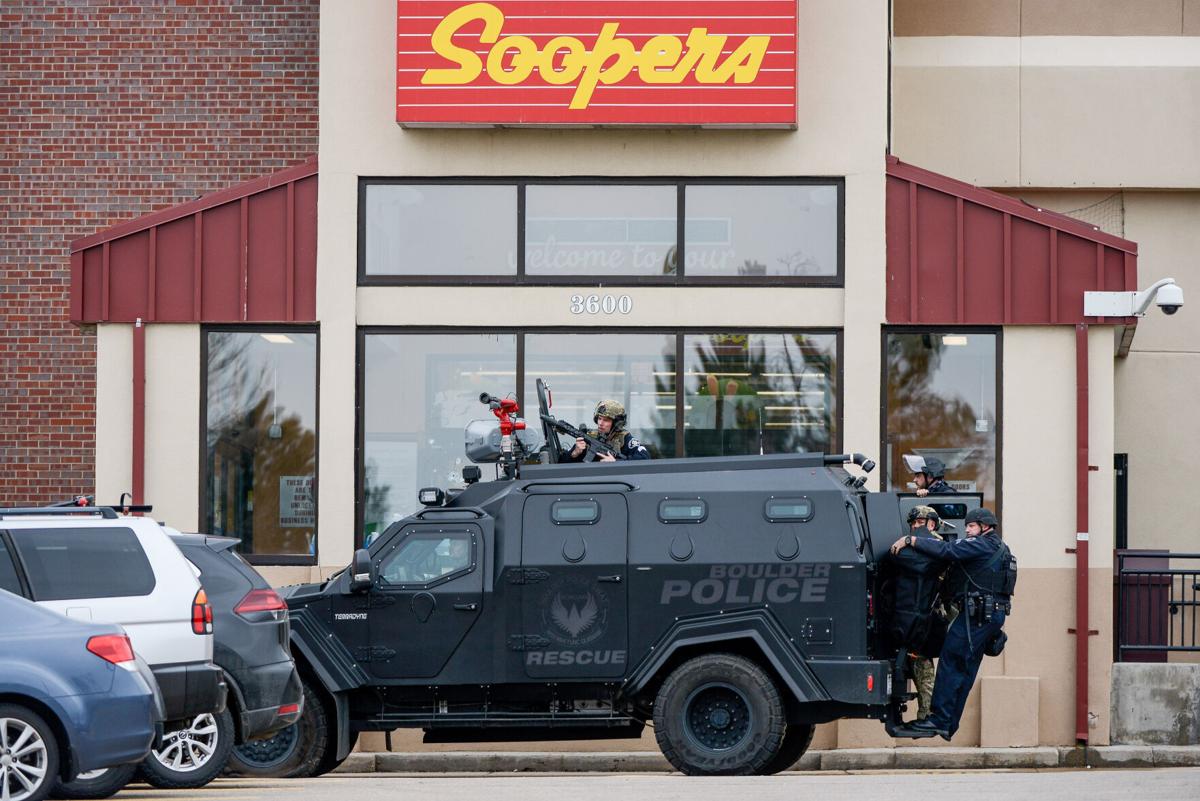 Police officers respond to a shooting at a King Soopers on Monday, March 22, 2021 in Boulder, Colorado. (Michael Ciaglo/Special to The Denver Gazette) 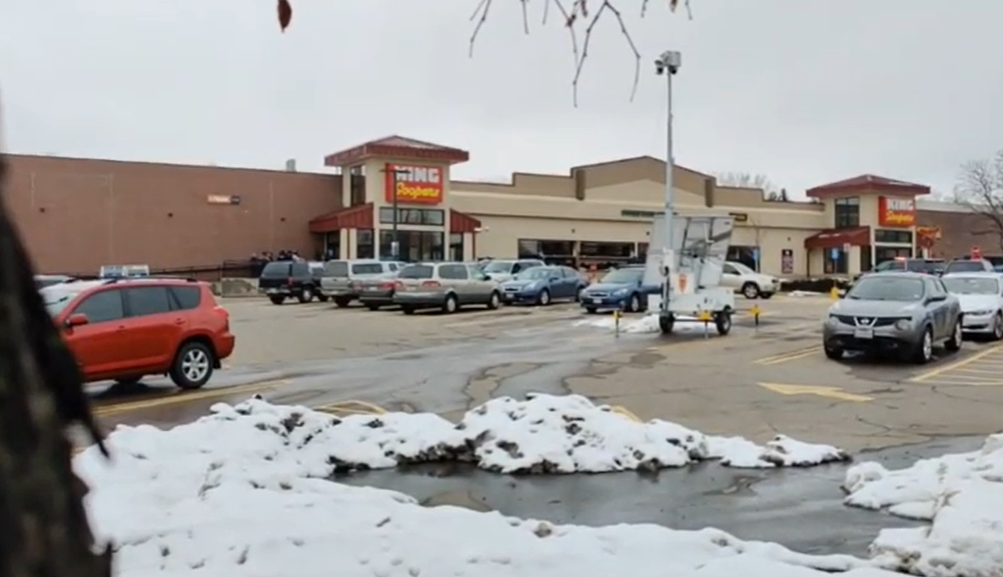 A Police officer hugs a fellow officer as they respond to a shooting at a King Soopers on Monday, March 22, 2021 in Boulder, Colorado. (Michael Ciaglo/Special to The Denver Gazette)

Law enforcement officers stand outside of a King Soopers in Boulder where an active shooter was reported Monday afternoon.

Boulder Police Department commander Kerry Yamaguchi speaks to the media as police officers respond to a shooting at a King Soopers on Monday, March 22, 2021 in Boulder. (Michael Ciaglo/Special to The Denver Gazette)

A man holds a thin blue line flag as emergency vehicles escort the body of a slain police officer from the scene of a shooting at a King Soopers on Monday, March 22, 2021 in Boulder. Ten people were killed in the shooting. (Michael Ciaglo/Special to The Denver Gazette)

Police officers lead a group of King Soopers employees away from an active shooting at the grocery store on Monday, March 22, 2021 in Boulder, Colorado. (Michael Ciaglo/Special to The Denver Gazette)

Police officers respond to a shooting at a King Soopers on Monday, March 22, 2021 in Boulder, Colorado. (Michael Ciaglo/Special to The Denver Gazette)

A gunman killed 10 people, including a police officer, at a King Soopers grocery store in Boulder on Monday afternoon, plunging the university town into what local authorities called "a tragedy and a nightmare."

Police Chief Maris Herold said the 10 fatalities included Officer Eric Talley, 51, who had been on the Boulder force since 2010. Talley was the first officer on the scene at 3600 Table Mesa Drive, responding to the shooting within minutes of the initial 911 call at 2:49 p.m.

"Without that quick response, we don't know if there would have been more loss of life," Commander Kerry Yamaguchi said.

A long procession of police cars and ambulances, lights flashing, escorted Talley's body through Boulder from the store around 7:45 p.m.

One "person of interest" was in custody.

“There is no ongoing public threat," Yamaguchi said Monday night. "We do have a person of interest in custody. That person was injured during the incident and is being treated for the injuries." That was the only person who sustained serious, non-fatal injuries during the shootings, according to police.

Overall, few answers came from police in what promised to be a long investigation. No victims had been identified by officials late Monday night. Yamaguchi refused to comment on possible motives or whether the person in custody was connected to King Soopers or any of the victims.

ALERT: Active Shooter at the King Soopers on Table Mesa. AVOID THE AREA. PIO is en-route.

Police said they responded to the area on reports first of a person shot in the parking lot, and when officers arrived, they were immediately fired at.

A video live-streamed on YouTube shows at least two people on the ground in the King Soopers parking lot and one person lying on the floor inside the store.

Witnesses described a harrowing scene inside the store. One shopper told KCNC-TV he heard three loud bangs. He said everyone ran to the back of the store, to the employee area where workers told them how to escape. They walked single file, with their arms on the backs of those in front of them.

The employee said the shooter was inside. Several gunshots could be heard firing inside of the store.

A 21-year-old Boulder resident told the Denver Gazette he was shopping in the store with his mother when he heard shots on a different side of the store from where he was. After the first shot, he dropped to the ground. He heard three shots total, he said.

"I heard the first shot, and by the next two shots, we were on the ground and ready to (expletive) run when we had the opportunity," he said.

He estimated it took him and his mother less than a minute to get out of the store, and they made it about halfway across the parking lot when he spotted a person he believed was dead.

When he spoke to the Denver Gazette around 5:30 p.m., his car was still cordoned off in the area near where the shooter entered. They had to leave their dog inside the car, he said.

He said when the shots rang out, some people began screaming, some dropped to the ground and others ran.

"I can only hope that they're all right. That's just (expletive) not cool," he said.

He was safe at his residence when he spoke to the Denver Gazette.

One witness to the shooting told Fox 31 Denver the shooter used an AR-15, a semi-automatic rifle.

At around 3:30 p.m., the video showed police escorting a man in handcuffs out of the King Soopers. The man was shirtless with no socks or shoes and one of his legs was covered in blood. Video showed an ambulance pulling away from the store.

Boulder Community Health hospital representatives said they received only one patient associated with the King Soopers shooting. Patients would not include anyone pronounced dead at the scene. Yamaguchi said the person of interest remains in the hospital.

“This is a tragedy and nightmare for Boulder County,” District Attorney Michael Dougherty said. “We will stand united in support of the victims and their families to ensure that justice is done.”

No court appearance has been scheduled for the person of interest, Dougherty said. But Colorado Attorney General Phil Weiser said his office is ready to assist in the legal process in any way needed.

“I’m deeply saddened and angered with the news of another tragic shooting in Colorado," Weiser said. "Our office is standing ready."

Just before 4 p.m., numerous people were seen being walked out of the King Soopers by police, including multiple people wearing Starbucks and King Soopers aprons or nametags. Police radio traffic confirmed the store had been cleared.

Video at that time shows officers and a SWAT car surround a burgundy vehicle as a police officer ordered the occupant to surrender. The video was cut off immediately after. It is unclear who was inside the vehicle or what happened to them. Police said only one person of interest is in custody.

At 5:10 p.m., Boulder police issued a shelter-in-place order for 17th Street and Grove Street related to a "report of (an) armed, dangerous individual." The order was lifted at 6:40 p.m. Yamaguchi said police were investigating to determine if the situation was related to the King Soopers shooting; however, they concluded it was not.

“My heart is breaking as we watch this unspeakable event unfold in our Boulder community," said Gov. Jared Polis, who lived in Boulder before moving to the governor's mansion. "We are making every public safety resource available to assist the Boulder County Sheriff's Department as they work to secure the store."

At least three medical helicopters responded to the scene.

Denver's Executive Director of Public Safety Murphy Robinson said he has committed Denver safety resources to Boulder to assist with this situation for as long as needed.

Police continue working to identify the victims and notify their families.

Homer Talley, the father of the police officer killed, posted that his son "took his job as a police officer very seriously," adding that he had seven children, the youngest being 7. Eric Talley joined the force when he was 40, according to his father's post, and had been looking for a job to keep himself off the front lines ... he didn't want to put his family through something like this."

Police urge people to avoid the King Soopers area as the investigation continues. Any witnesses to the shooting or people looking for loved ones are instructed to call Boulder Police at 303-441-3333.

White House Press Secretary Jen Psaki said at 6 p.m. President Joe Biden has been briefed about the shooting and will be kept up to date on additional developments.

U.S. Sen. Michael Bennet, D-Colo., said in a statement promoting conversations about gun violence and policy, "It’s long past time for Congress to take meaningful action to keep deadly weapons out of the wrong hands. There are steps that the overwhelming majority of Americans want us to take. And they have every right to expect us to finally do something about gun violence in our country."

“We are heartbroken and enraged at what has become all too common in our country: a mass shooting in a peaceful and loving community," the statement read. "As we wait for more details to emerge, we at least know this much: gun violence is an epidemic that has stolen far too many sons, daughters, sisters, brothers and loved ones from families across Colorado. We must continue our fight to reduce gun violence and save lives. Inaction is not an option.”

Colorado has a long history of mass shootings, with the state claiming the fifth most mass shootings in the U.S. since 1982, according to Statista.

The Columbine High School shooting in 1999 was one of the first massacres in a school. The Aurora theater shooting in 2012 was followed by The Planned Parenthood shooting in 2015 in Colorado Springs. In 2019, a student was killed and eight injured in a shooting at STEM School Highlands Ranch.

"Enough is enough," U.S. Rep. Joe Neguse, D-Lafayette, whose district includes Boulder, said in a statement. "Americans should feel safe in their grocery stores. They should feel safe in their schools, their movie theaters and in their communities. While Congress dithers on enacting meaningful gun violence prevention measures, Americans — and Coloradans — are being murdered before our very eyes."