The wild horse roundup in the Sand Wash Basin Horse Management Area near Maybell has now gathered 101 horses, although one escaped.

According to the Bureau of Land Management, on Wednesday, the first day of the roundup, 22 stallions, 32 mares, and 11 foals (all which will be put up for adoption or auction) were "gathered," using helicopters to drive them toward pens.

There were no roundups on Thursday because of the weather. Another 16 were rounded up as of this reporting on Friday. The roundup is expected to last between 14 to 25 days; BLM intends to round up 783 wild horses, including 100 outside the Sand Wash Basin area.

Twenty-five mares and 25 stallions will be returned to the herd. The total herd size would be reduced from over 800 to 163 despite BLM estimates that the basin could support 362 horses.

The BLM did not return a request for comment.

The BLM's website said the agency "will conduct gather operations by using drive trapping which has been proven effective and humane. The BLM and the contractor will do everything they can to ensure wild horses are treated humanely." The website does not mention the use of helicopters as part of the roundup.

But advocates for the herd say using helicopters — which is how drive trapping is conducted — is the opposite of humane and can result in injury and even death to panicked, stampeding horses.

And chances that the BLM's leadership, including Secretary of the Interior Deb Haaland, will come through to stop the roundup, appear slim.

While Haaland was in full support of stopping helicopter roundups of wild horses when she was a U.S. representative from New Mexico, she's changed her tune since becoming Secretary.

According to Gray TV, Washington, D.C., Haaland commented that “we’re in agreement with the plan of the previous administration,” comments she made during an April 20 appropriations hearing.

“We’re going to let the science guide us," she reportedly said.

An Associated Press report from 2019 said the Trump administration planned to speed up the roundup of some 130,000 wild horses, a "comprehensive package of proposals offered in April [2019] by  an unprecedented coalition of livestock industry interests and animal welfare advocates, including the American Society For the Prevention of Cruelty to Animals and Humane Society of the United States."

The administration plan called for accelerated roundups and surgical sterilization of the mares.

The AP story noted backers such as the National Cattlemen’s Beef Association and American Farm Bureau Federation have been pushing "for the slaughter of excess horses that compete for forage with livestock grazing on U.S. lands."

The Trump administration plan drew a letter in December, 2019 from a dozen bipartisan members of Congress, including Haaland and U.S. Rep. Joe Neguse, D-Lafayette. The letter asked a House Appropriations subcommittee to limit new funding for the plan, which the group called "the most sweeping changes to the wild horse and burro program since its inception nearly 50 years ago." The letter also asked that the committee reject the plans for surgical sterilization.

"We share the Appropriations Committees'  interest in finding genuine solutions to BLM's management of wild horses and burros and stand ready to work with you to explore and pursue all humane, scientific and economic solutions that protect these animals and meet the expectations of the American public," the letter concluded.

Haaland and Neguse were also among 22 signatories to a November 2020 letter to the appropriations committees as well as Speaker of the House Nancy Pelosi, D-Calif., that raised red flags about how the BLM was managing wild horse roundups.

"As a result of the BLM’s mass roundup strategy and removal mismanagement, there are nearly 50,000 animals in short- and long-term holding, and this number will only increase if the BLM continues to rely primarily on a failed system of mass removals. These holding facilities, like the roundups themselves, are often harmful to the health and well-being of these animals. In fact, efforts to remove horses from the range without supplemental fertility control efforts actually increases population growth rates through compensatory reproduction," the letter stated.

According to the American Wild Horse Campaign, instead, the U.S. Senate approved additional funding to the BLM horse roundup program, "which involves the controversial drive-trapping method of chasing wild horses into pens using helicopters. The horses are then separated from their herd-families and held in expensive holding facilities.

According to a Sept. 16 report from Bureau of Land Management, 71% of the more than $87 million that had been spent on the Wild Horse and Burro Program in 2020 was used to conduct roundups and place horses in holding facilities."

None of that budget was spent on the birth control favored by wild horse advocates, known as PZP, Porcine Zona Pellucida.

On Tuesday, Neguse wrote to Haaland at the BLM, asking her to postpone the roundup to allow for a more "thorough and robust stakeholder process."

As Chair of the @NRDems Public Lands Subcommittee, I believe protecting our wildlife and public lands is critical.That’s why today I sent a letter imploring @BLMNational to delay the Sand Wash Basin wild horse roundup and adopt more humane alternatives. #WildHorses⬇️⬇️⬇️ pic.twitter.com/EyzwloR7zX 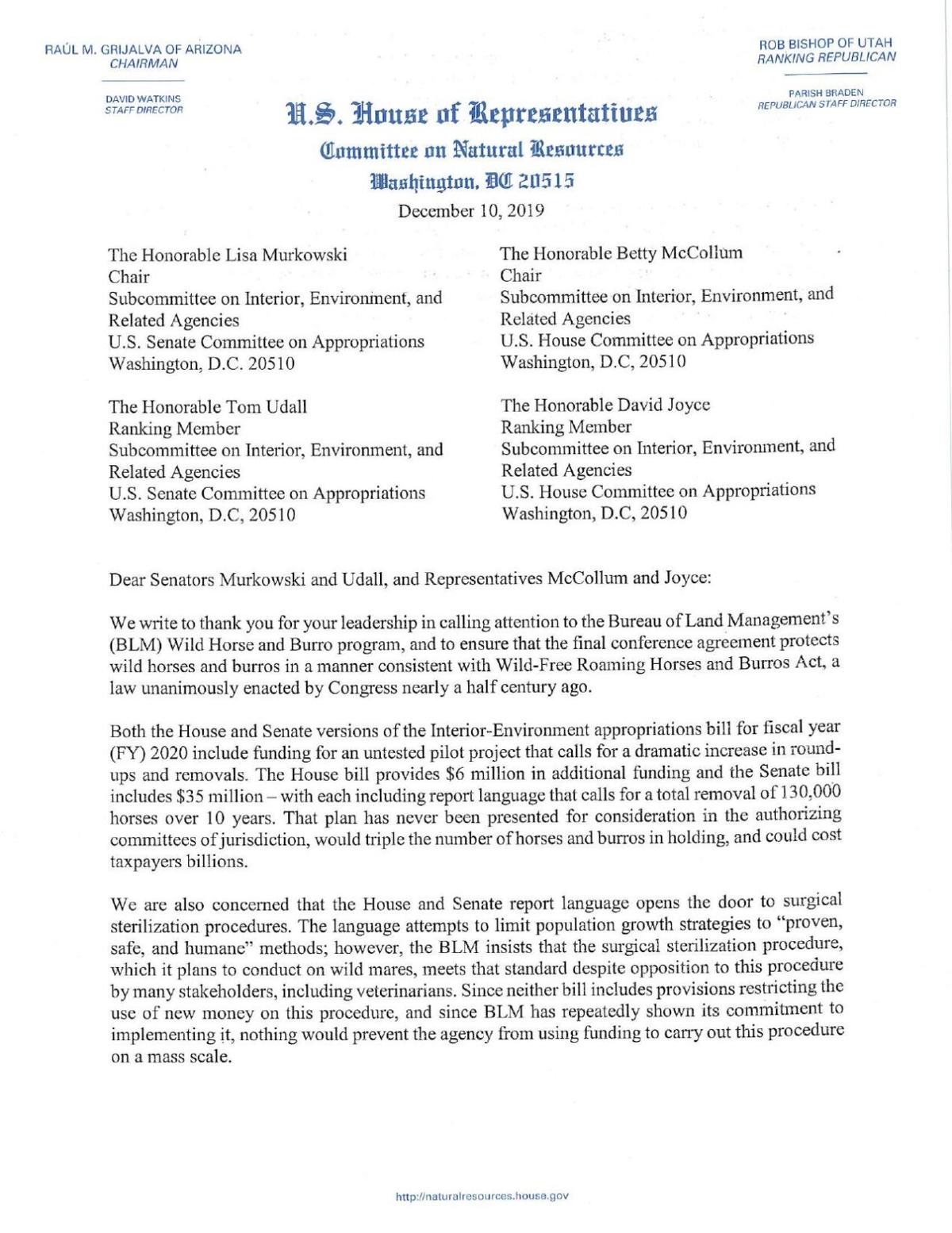 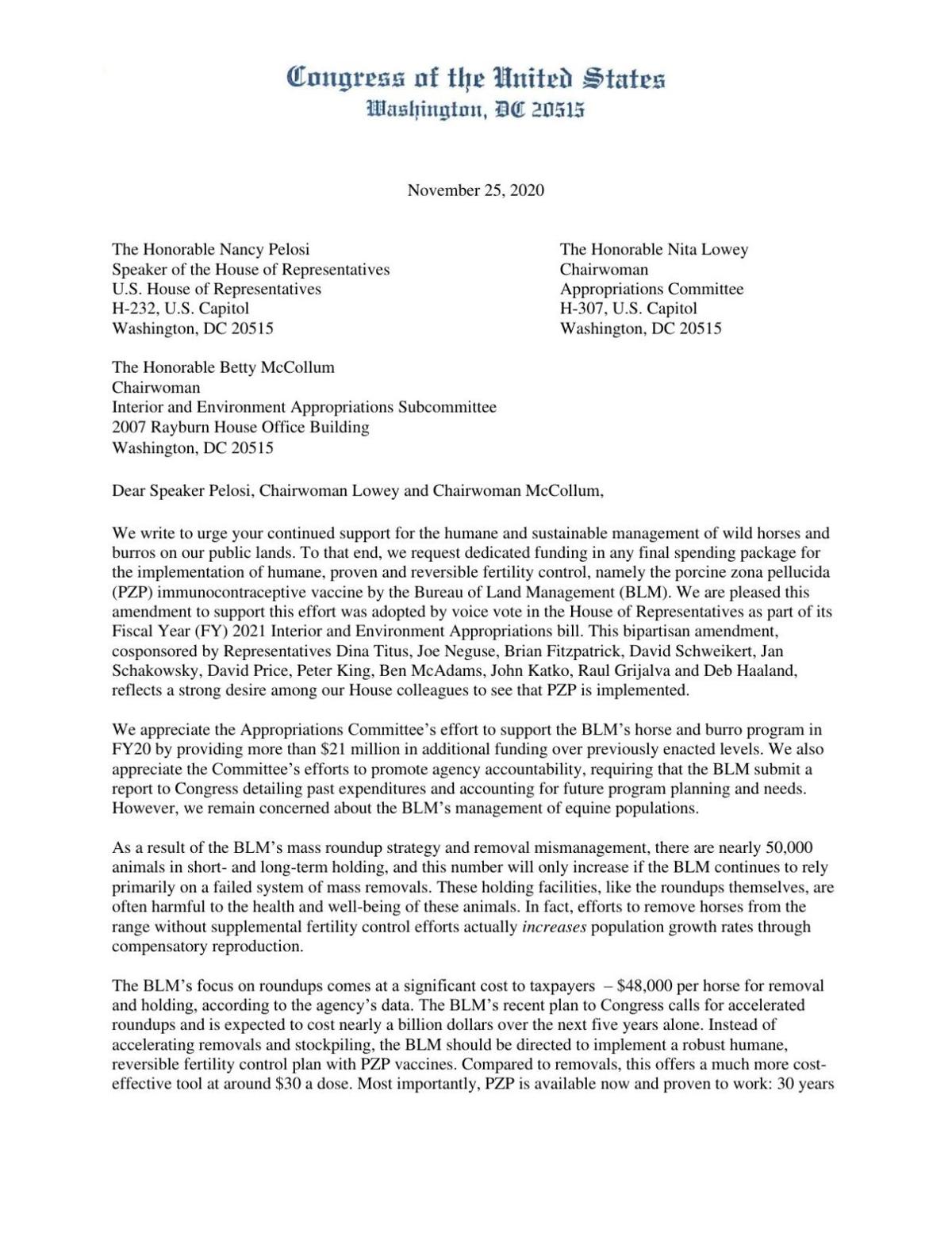 Gov. Jared Polis and his partner, Marlon Reis, sent a two-page letter to Secretary of the Interior Deb Haaland and Nada Wolff Culver, deputy director of policy and programs at the BLM, asking them to freeze the planned roundup at Sand Wash Basin in Moffat County.