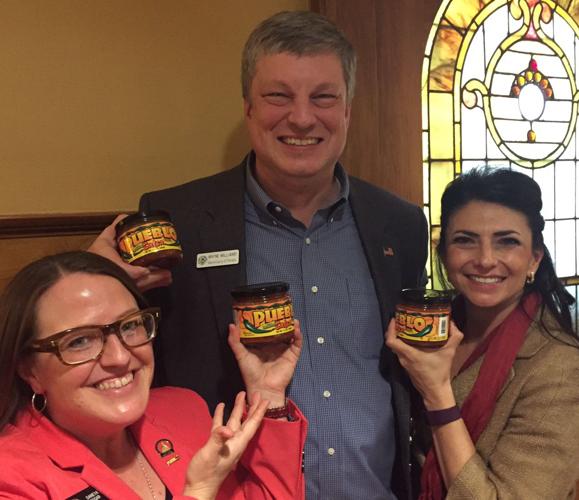 Pueblo’s up-and-coming leaders met with their lawmakers and other elected officials, including Colorado Secretary of State Wayne Williams, during a visit to the state Capitol on Thursday.

The visitors are part of the Greater Pueblo Chamber of Commerce’s Leadership Pueblo 2016 class that began in January with a two-day retreat in Trinidad and ends in May.

Lobbyist Patrick Boyle addressed the Leadership Pueblo class about the role of lobbyists at the Capitol. At a lunch at the University Club, he said the Pueblo delegation is unique among the lawmakers because despite partisan differences the focus has always been on helping folks in their southern Colorado community.

Rep. Daneya Esgar, D-Pueblo, echoed that sentiment. “I have colleagues jealous of the work we do together,” she said.

She also pointed out that she is a graduate of Pueblo Leadership’s 2010 class.  “This program is really invaluable,” she said.

Other lawmakers who attended were Republican Rep. Clarice Navarro and Democratic Sen. Leroy Garcia, both of Pueblo, and Sen. Larry Crowder of Alamosa, who represents Pueblo County outside the city.

Williams, who lives in Colorado Springs, got a laugh from the crowd when he said he’s actually one of the state’s elected officials who lives outside of C-470 and has traveled south of Monument. When he worked as an attorney, he said he visited Pueblo on behalf of his clients.

Williams touted the successes in his  office, which last week found out it again is a finalist for a top award from the National Association of Secretaries of State. Also, voter registration, business renewals and a variety of other functions overseen by the office can be done online.

“We really try to make things easier for people to do. We try to innovate in Colorado,” he said. “If your house got hailed on and a roofer comes by and you’ve never seen this person before you can go on our website and find out whether they’re actually a legitimate business in Colorado.”

Williams noted that several participants he met in the Leadership Pueblo class were involved in nonprofits.

“Most of the time when someone gets asked to serve on a board they don’t really know what’s involved in the process,” he said. “We have board-of-directors training for nonprofits totally free on our website.”

Williams, the former El Paso County clerk and recorder, also addressed one of his passions: ensuring the ease of voting for military and overseas voters.

He noted state law extended the time period for those ballots to be mailed and returned but municipalities did not. He thanked Sen. Garcia for his leadership on rectifying that situation with a bill passed last year.

Leadership Pueblo is designed to assist up-and-coming leaders and decision-makers in the community  better grasp the issues facing the community, according to its website. Sessions include Pueblo’s past, present and future, state and local government, education, health and human services, Pueblo’s resources, the arts and the media.

To see more posts from Lynn Bartels, visit her official blog at the Colorado Secretary of State website.