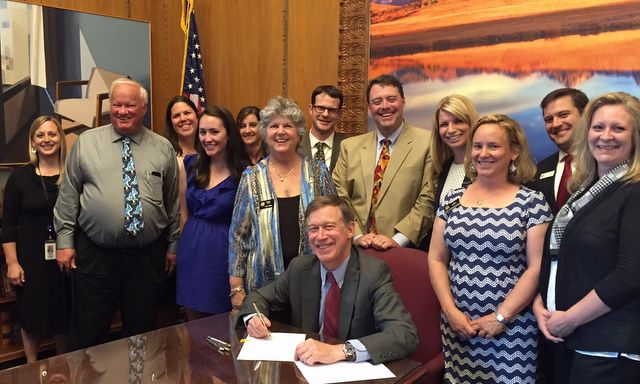 A Steamboat Springs school board member frustrated that he couldn’t find out until after an election how much outside groups poured into to elect their favorite board candidates watched Wednesday as Gov. John Hickenlooper signed an accountability bill into law.

Roger Good testified on behalf of House Bill 1282 at a Senate committee hearing — he would have been at the House hearing, too, he said, but he was out of state.

“I wanted to be a voice for rural Colorado,” Good said after the bill signing.

House Bill 1282 bill requires the disclosure of independent expenditures of more than $1,000 within 60 days prior to the election. It also requires disclosure of spending on advertisements, billboards and direct mailings. It does not deal with individual donations to candidates; a bill to limit those contributions died.

Currently, information about independent expenditures in school board races has to be filed with the Colorado Secretary of State’s office quarterly, including a report on Oct. 15 before the November election. But the next report doesn’t  have to be filed until Jan. 15 of the following year, allowing donations throughout October and early November to be kept quiet until after the election.

That’s why Good got involved.

“Anyone should be able to give whatever they want to any candidate they want, but it’s in the public’s best interest to know who’s giving,” Good told his hometown paper, the Steamboat Springs Pilot & Today, on Wednesday.

The newspaper reported that “this issue became particularly relevant to Steamboat voters in January, when campaign finance reports revealed a Front Range political committee had spent as much as $40,000 on campaign materials supporting” two  school board candidates who won their races in November.

One of the most highly watched school board election in the country was in Jefferson County, where three conservative board members were recalled.  Chalkbeat reported that national and local teachers unions provided more than $265,000 to help with the recall, but noted “the full picture of the financial forces on both sides of the campaign remains incomplete, because of lax state and federal reporting requirements.”

The bill was sponsored by three Democrats, Reps. KC Becker of Boulder and Brittany Pettersen of Lakewood and Sen. Nancy Todd and Republican Sen. Jack Tate of Centennial.

“This law aligns campaign rules for school board races with the requirements for other state races,” Becker said in a news release from House Democrats. “Colorado voters have a right to know who is spending money to try to influence their votes. Prior to this law, that information was not required for school board races.”

Although the bill was not part of Secretary of State Wayne Williams’ legislative agenda for the 2016 session, the office supported the measure and Staiert testified on its behalf.

The bill was one of several Hickenlooper signed into law Wednesday during ceremonies in his office with sponsors and stakeholders. It was the last bill signing of the day, as you can probably tell by this picture:

To read more posts by Lynn Bartels, visit her official blog at the Colorado Secretary of State website.