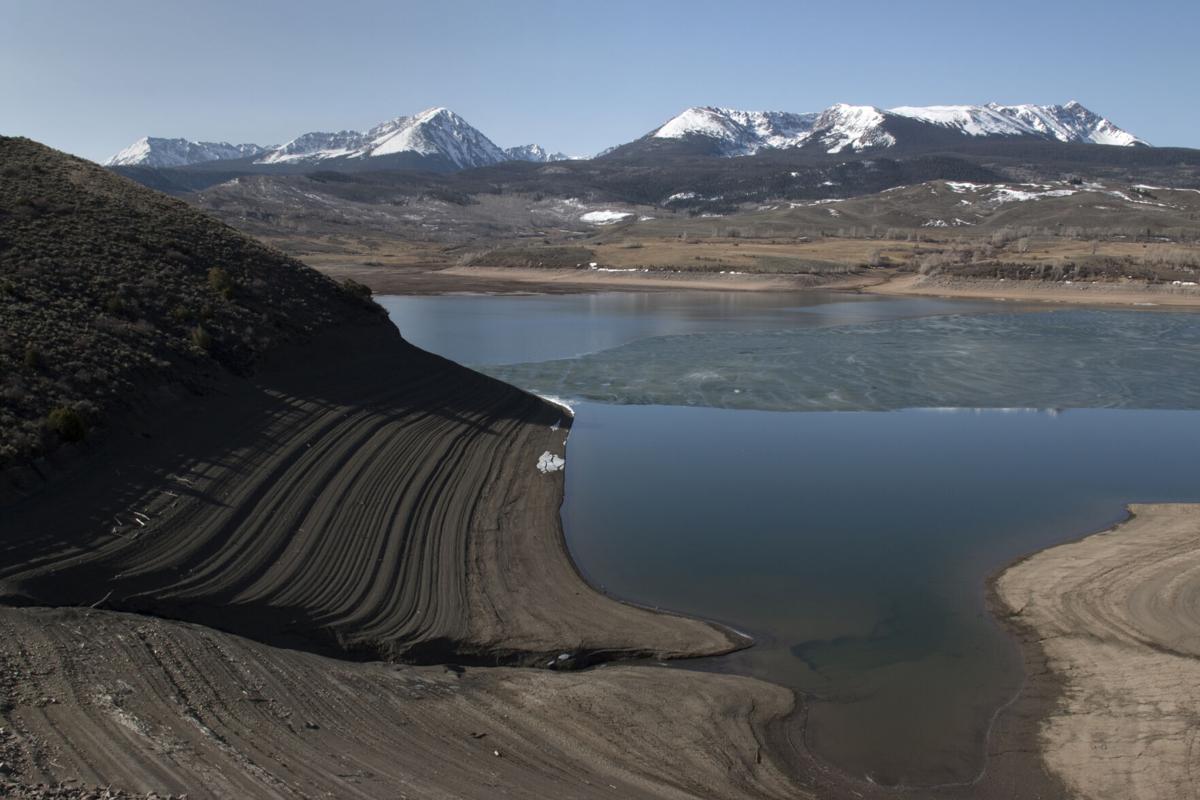 A drought with low snow levels has left Green Mountain Reservoir in the Rocky Mountains outside Dillon, Colorado very low leaving behind distinct bathtub lines well above the waters edge. The snow capped Gore Range mountains stand in the distance as a patch of ice melts in the water. 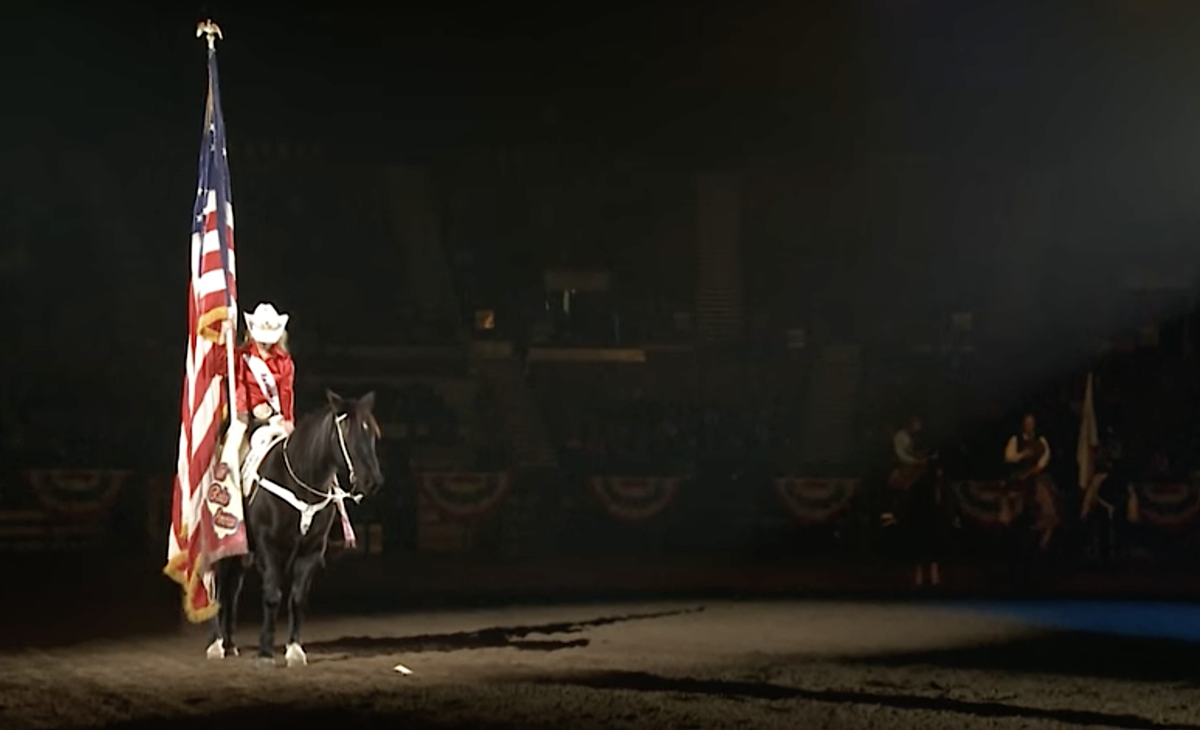 Before each rodeo during the National Western Stock Show in Denver, riders present the American flag.

A drought with low snow levels has left Green Mountain Reservoir in the Rocky Mountains outside Dillon, Colorado very low leaving behind distinct bathtub lines well above the waters edge. The snow capped Gore Range mountains stand in the distance as a patch of ice melts in the water.

Before each rodeo during the National Western Stock Show in Denver, riders present the American flag.

Thanks to coronavirus, the Stock Show didn’t happen and lawmakers won’t go back into session until mid-February, making this blah time of the year seem even worse. Some odds and ends:

Even if I hadn’t followed the NFL playoffs, I would have known the games were coming because I started getting recipe requests for my go-to game-day specialities: Scotcheroos, which my friends erroneously call K-Bars, and White Girl Enchiladas.

Watching the playoff games made me nostalgic for the Broncos in their heyday. I loved being assigned to cover the football parties and sampling the smorgasbord of goodies provided by the hosts and their guests. Denver’s dailies were filled with mouth-watering recipes for game-day spreads, and grocery store inserts were packed with great prices for chicken wings and avocados.

I regularly brought containers of K-Bars to the state Capitol, where one of the biggest fans turned out to be lobbyist Ben Waters. He calls these souped-up Rice Krispie treats “unicorn meat.” For one of his birthdays I brought over two containers, one for the party and one for his addiction. When I told him I hid a batch in the freezer, he let out The Ben Waters scream.

As for the White Girl Enchiladas, I started making them when I worked at my first newspaper job, in Gallup, N.M., in the early 1980s. The natives laughed when they learned the enchiladas were made with the holy grail of Midwestern cooking, a can of Campbell’s Cream of Something soup. But more than one asked for the recipe.

A few years ago when the brand White Girl Salsa appeared, friends emailed me to say I should have trademarked the name of my recipe. When I make enchiladas back in South Dakota, some folks refer to them as a hotdish. I love that.

Don’t tell Rep. Daneya Esgar, but I still use Hatch green chiles. She is the unofficial spokeswoman for Pueblo chiles and even has a tattoo to prove it. To make it up to her, I’ll bring her a batch of K-Bars.

If you want the recipes for K-Bars and White Girl Enchiladas, you know where to find me: againlynn@gmail.com.

As for the playoffs, the first game on Jan. 24 was between Green Bay and Tampa Bay. I didn’t really care who won, I just wanted a good game, which it was. The Buccaneers, led by Tom Brady, prevailed, which excited former U.S. Sen. Cory Gardner. He emailed me that Sunday to remind me that the Bucs’ general manager, Jason Licht, is also from Yuma.

I did have a favorite for the second game, the Kansas City Chiefs vs. the Buffalo Bills. I was thrilled last year when KC won the Super Bowl, but unless it’s the Broncos playing back-to-back for the championship I want to give other teams a chance.

The Bills have lost four Super Bowls. So have the Vikings. So had the Broncos before Denver beat Green Bay in 1998.

I really wanted the Bills to win, although KC QB Patrick Mahomes (Is it just me or does last name sound like cajones?) was too much for the Bills. I would like to point out, however, that Buffalo has added its own contribution to game-day delights: Buffalo Hot Wings.

On game day, I was reciting the Broncos’ incredible road to their first Super Bowl win. Jacksonville at home, the Chiefs in Kansas City, the Steelers in Pittsburgh and then on to San Diego for the big game.

My sister Brigid looked at me in shock. “How could you remember all that?” she wondered.

How can anyone forget? The party I was assigned to cover had hired a caterer, and Denver won the game.

Speaking of the Broncos, the drought in Colorado is worsening every month.

That likely means another year of massive wildfires, plunging lake levels and dried up farmland in Colorado. Last year, fires tore through more than 625,000 acres.

Story after story in recent weeks have painted a doomsday scenario.

“According to experts, the fiery hellscape that was Colorado’s 2020 fire season is just a preview of what’s to come,” 5280 Magazine reported.

It’s hard to believe that just four years ago the snowfall in Crested Butte was so intense that drifts covered street signs.

That January I made a rare trip to the mountains to see my sister Susan and her husband, Bruce, who for a number of years would take a break from snow in Wisconsin to spend six weeks or so skiing in Crested Butte. Their condo complex was buried in snow and to leave by the front door you walked through a tunnel that had been shoveled from the building to the street.

A friend visiting around the same time was outraged to get a traffic ticket. How could he obey parking signs he couldn’t read because they were covered in snow?

The only thing I dislike more than excessive snow is wildfires, so I am hoping something happens here in the next month or two.

The National Western Stock Show, which was established in 1906, is held every January for 16 days — unless, of course, there is a pandemic.

It’s the premier livestock, rodeo and horse show in the nation, and photos of the Stock Show parade, with cattle running through downtown Denver streets, always dominate the front pages.

Except when the parade was canceled because of the “risk of animal injury and injury to people is far too great with the 4 to 8 inches of snow predicted and six-degree temperatures.”

That was in 2017, the same year snow hammered Crested Butte.

The cancellation of this year’s entire event resulted in a loss of more than $120 million in revenue, but organizers are hoping to come back next year bigger and better,”  Stock Show CEO Paul Andrews told Colorado Politics.

“We love agriculture. We love rodeo. We love the horse show. We love livestock. So not being able to do what you love is heartbreaking. But we're also — the world of agriculture, farmers, ranchers, frankly —  the toughest people on the planet,” Andrews said.

“And we won't be overcome by a virus.”

Words to live by.

Two things are making me smile: Ted Lasso and chlorine.

“Ted Lasso” is a wonderful show about an American football coach managing an elite British soccer team. Ted is, as one reviewer said, “an eternal optimist with his heart unabashedly on his sleeve.”

My hairdresser found solace in the show when her business was closed last year. When I googled the show, one headline read, “Why ‘Ted Lasso’ is so good.”

One reason is because it makes you feel good.

As for chlorine, the indoor-pool in our condo is finally open after closing last March. My muscles ached the first week, but at last, a good hurt.