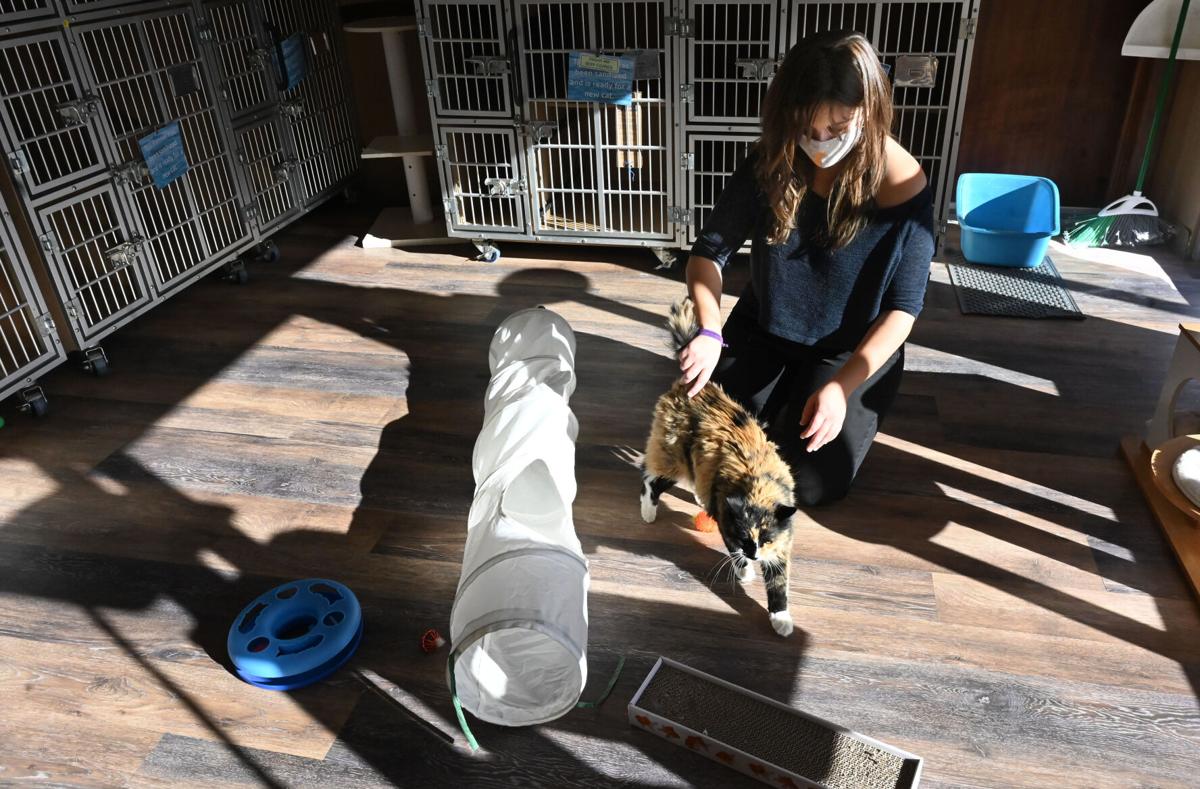 Colorado Gives Day is an annual event to encourage philanthropy in Colorado through online giving. There are more than 2,900 nonprofits to support on Colorado Gives Day, including many in Colorado Springs. One of the nonprofits is Safe Place for Pets, which supports  terminally ill people with care for their pets. Executive Director Amalie Fellini plays with Daisy, an eight-year-old Calico kitty on Sunday, Dec. 6, 2020. Daisy’s owner died of Alzheimer’s disease. She was taken in by Safe Place for Pets and is up for adoption. Hospice nurses started the nonprofit nearly 25 years ago. (Photo by Jerilee Bennett, The Gazette) 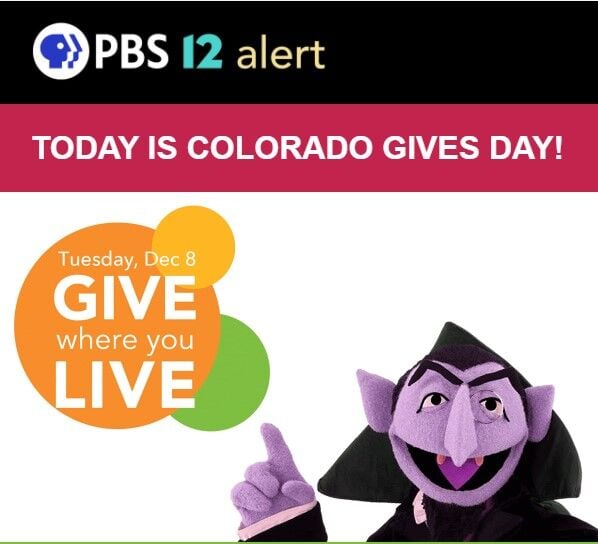 Colorado Gives Day is an annual event to encourage philanthropy in Colorado through online giving. There are more than 2,900 nonprofits to support on Colorado Gives Day, including many in Colorado Springs. One of the nonprofits is Safe Place for Pets, which supports  terminally ill people with care for their pets. Executive Director Amalie Fellini plays with Daisy, an eight-year-old Calico kitty on Sunday, Dec. 6, 2020. Daisy’s owner died of Alzheimer’s disease. She was taken in by Safe Place for Pets and is up for adoption. Hospice nurses started the nonprofit nearly 25 years ago. (Photo by Jerilee Bennett, The Gazette)

If ever there was a year to give, this jobs-lost, restaurants-closed, hospitals-overwhelmed kind of a year is the one.

”I don’t know how much worse my situation can get,” a neighbor recently wrote on Nextdoor. “I am out of work due to COVID …’’

I felt overwhelmed on Colorado Gives Day on Dec. 8. I knew that because of my own pandemic-impacted life, I wouldn’t be able to donate as much as I have in the past and I would have to skip some needy and deserving organizations I previously supported.

Colorado Gives Day is the state’s largest one-day online giving event, raising more than $257 million since it began in 2010. The event features a $1 million “incentive fund” and every nonprofit receiving a donation on Colorado Gives Day receives a portion of the fund. More than 2,900 nonprofits benefit.

Among the nonprofits that sought donations:

- The Tennyson Center for Children in north Denver. It has served Colorado’s most neglected, abused, and traumatized children for more than a century; its mission statement is, “We work with every child and family impacted by trauma to realize their infinite possibilities.

- The Vintage Theatre in Aurora. I’m on the theater’s mailing list because I went to see longtime Democratic strategist Denis Berkfeldt’s stunning portrayal of disgraced president Richard Nixon in the play “Frost/Nixon.” For his work, Berkfeldt was recently honored with the 2020 True West Award.

- PBS12. In its appeal, the public television station featured the Count from “Sesame Street.” “Make a world that kids can count on today,” the station asked. Local programs include “Colorado Inside Out,” the Friday night program that political junkies love to turn to.

Colorado donors raised more than $50 million for local nonprofits this year. The top three categories receiving donations, which range from $5 to $200,000 were for human services, animals and the arts, humanities and culture.

If you missed Colorado Gives Day, the nonprofits are still collecting donations.

I had planned to limit my donations, but then I got a call mid-morning from Alexander Wamboldt, the youth and schools program manager for One Colorado, the state’s largest gay rights organization. He thanked me for my donations in the past.

I remembered that I got a call from One Colorado last year, too, and I was so impressed with the personal outreach that I donated again, but only half of what I was able to give in 2019.

“That doesn’t matter,” Wamboldt assured me.

“So many in need, so much giving to do! Who is getting your donation and why?? #COGivesDay #COLeg #GiveThanks,” tweeted Rep. Julie McCluskie, a Dillon Democrat.

I donated to “Colorado’s Home,” better known as the governor’s mansion, because that 112-year-old historic home has been such a part of my career here in Denver.

I first stepped inside the mansion in 1994 or 1996 when the Rocky Mountain News sent me to cover a precinct caucus there. Gov. Roy Romer, his wife, Bea, and their seven kids called the mansion home for 12 years.

When I got assigned to cover the legislature in 2000, I became a regular visitor to the mansion for political events and parties. By then, First Lady Frances Owens had removed the shag carpet and other ‘70s-inspired decor in the family living quarters.

I ripped new Gov. Bill Ritter in 2006 when the family brought a cat to the mansion. I argued that too many people are allergic to cats.

He would later tell me they actually were a dog family, but took in a “temperamental” cat. I was interviewing the family early in his term when the cat apparently began clawing at the furniture. Trained observer that I am, I missed the shredding but the horrified Ritters whisked the cat away to a farm.

By the time John Hickenlooper served as Colorado governor starting in 2011, I was working for The Denver Post. I knew the mansion well enough that I would stick my head into the security office there and say “hi” to the troopers.

The other historic building I donated to is the Denver Press Club, the oldest press club in the nation. Before the pandemic, it hosted spectacular discussions on a variety of issues.

Colorado Gives Day allows contributors to donate in honor of someone, and I chose John Ensslin. John and I worked together at the Rocky and then at Colorado Politics before his very untimely death last year at the age of 65. He single-handedly kept the Press Club alive for years.

I marked my donation to Adam’s Camp in honor of Sara Pielsticker, a phenomenal young woman whose cousin has Down Syndrome. Adam’s Camp serves children and young adults with developmental disabilities, as well as their families, and Sara has donated so much of her time and talent helping this population.

I saw firsthand the good work done by the Jewish Community Relations Council when I traveled to Israel at this time last year with lawmakers and civic leaders, so I made a donation to the group.

The organization is the public policy arm of Colorado's Jewish community but, as its website states, it works to deepen relationships with other groups. For instance, following the death of George Floyd while in the custody of Minneapolis police, the JCRC hosted the program "Black Perspectives on Systemic Racism: An Evening of Personal Testimony." More than 500 people watched the event live.

Another group seeking donations on Colorado Gives Day was Denver Active 20-30 Children’s Foundation, known as DA20-30. According to its website, the organization serves “underserved youth in the most marginalized segments of our community.”

One of DA20-30’s members is Justin Miller, who used to handle communications for House Republicans back when the caucus only included one or two crackpots.

Miller, who now is an attorney, must be so glad he’s not at the legislature anymore. There are too many loose cannons and their latest stunt is calling into question Colorado’s 2020 election, despite audits that show the results are accurate.

Miller sent out such a heart-breaking appeal I had to donate. Normally, DA20-30 takes the kids out to shop for family members, but because of COVID-19 the discussions about what to buy are occurring online.

“For most, these are the only presents that will arrive under the tree this year. What’s remarkable though is that none of the kids we're partnering with care that the presents they purchase aren't for them. They are enamored to be their family's own personal Santa Claus,” Miller wrote.

“I honestly struggle to describe how privileged and inspired I feel after each conversation I have with these kids. They are courage and benevolence incarnate; they embody exactly what Christmas spirit is all about! (And fear not, we're still surprising each of these little Santa Clauses with a gift of their own!)”

It costs $100 to sponsor a child but “anything helps,” Miller said.

Colorado Politics: As president and CEO of the Community First Foundation, some say you run a nonprofit’s nonprofit. Can you tell us how the f…