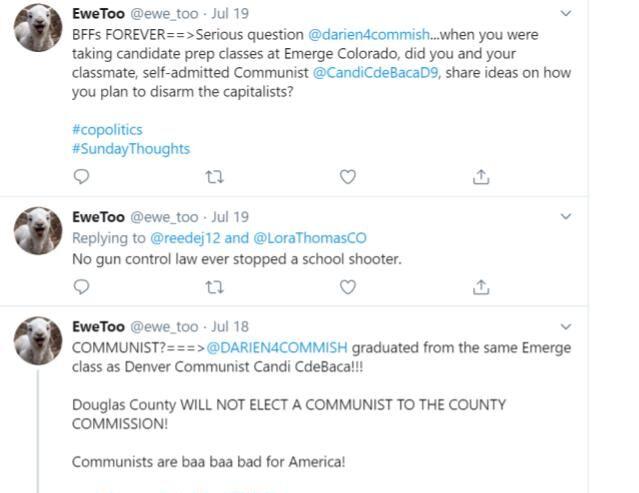 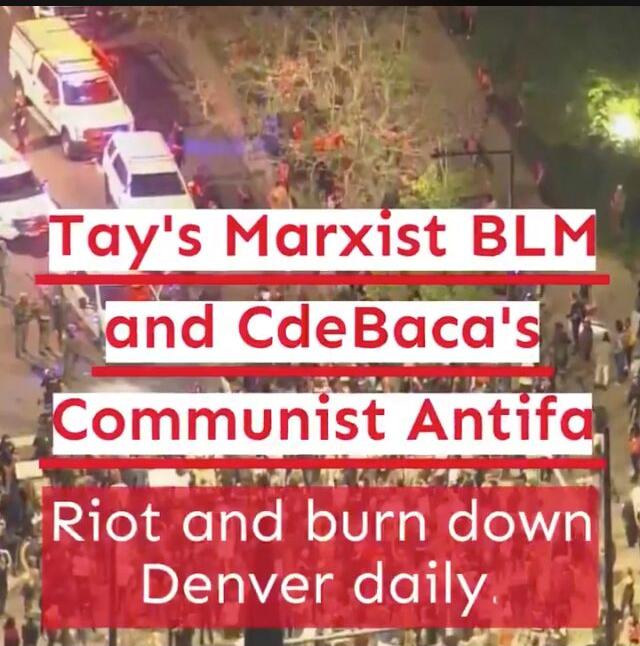 A screenshot of an ad made by an anonymous Twitter user attacking a Douglas County commissioner candidate.

A screenshot of an ad made by an anonymous Twitter user attacking a Douglas County commissioner candidate.

In mid-July, a Twitter account began making a series of posts fixated on an obscure subject: the Democratic candidate in a suburban county commissioner race.

“@DARIEN4COMMISH ASSOCIATES WITH THE FRINGE LEFT AND ADMITTED COMMUNISTS,” the account wrote on its first day of tweets on July 18. “Believe me, I know what a wolf in sheep's clothing looks like!” Then, user @ewe_too, whose profile picture was that of a sheep, signed it with the pun that appeared in an assortment of their posts.

“Darien is baa baa bad for Douglas County and Colorado!”

Darien Wilson, a Highlands Ranch resident and software company vice president who is running for the District III commissioner seat in the northwest corner of Douglas County, called the anonymous attacks against her a distraction.

“Despite efforts to paint me as an extremist, I’m a soccer mom business owner,” she said. “It’s a really ridiculous stretch to call me a Marxist and a communist because I believe that Black people’s lives matter as much as white people’s lives and everyone else’s.”

The nearly two-week-long bizarre attacks on Wilson clearly establish what line of campaigning @ewe_too believed would be effective with Douglas County voters: a focus on the Black Lives Matter movement and prominent politicians of color in Denver.

“BLM is destroying the state Capitol nightly and Dem leaders do nothing,” the account wrote on July 24. “In Wilson’s DougCo, BLM would destroy businesses and public buildings.”

@ewe_too posted pictures of Wilson with Denver Board of Education member Tay Anderson and Denver Councilwoman Candi CdeBaca. CdeBaca, elected in 2019, told the Colorado Independent that she does not identify as a communist, but believes in “community ownership of land, labor, resources, and distribution of those resources.” She and Wilson both are graduates of Emerge Colorado, a candidate training program for Democratic women on how to run for office. Fourteen sitting legislators, scores of local officials and Secretary of State Jena Griswold are also among the current officeholders who completed the training.

However, the anonymous account tweeted a list of Emerge alumnae with Wilson and CdeBaca’s names circled, and the image of a hammer and sickle superimposed next to them.

Michal Rosenoer, an Edgewater city councilor and Emerge Colorado's executive director, saw the account right before its suspension and said she was not too worried about it.

“The swing voter in Douglas County is a moderate, suburban, white, college-educated mother,” she said. “And those women also aren’t on Twitter.”

Nevertheless, the day @ewe_too disappeared from Twitter, Rosenoer and several others commented on a video that the account tweeted, presumably made by the same person operating the account. At just over a minute long, the slickly-produced campaign ad flashed pictures of racial justice protests in Denver across the screen, superimposed with statements like “Tay’s Marxist BLM and CdeBaca’s Communist Antifa Riot and burn down Denver daily.”

There was a tweet of Anderson’s that called the Aurora Police Department “trash,” and the video asked, “Does Darien agree with Tay?”

The final frame was a picture of Wilson, titled, “Darien is no moderate.”

Although @ewe_too’s follower count rose minimally to a total of 14 by the time the account vanished, the attack video garnered notice from more prominent conservatives.

“Denver is a liberal mess. @Darien4Commish will bring all of Denver’s bad ideas to Douglas County. Hard no!” added Jeff Hunt, the director of the Centennial Institute at Colorado Christian University. He also retweeted the campaign ad.

Wilson labeled as “dog whistle” tactics the various suggestions that she “kneels before” the “Marxist” Black Lives Matter movement.

“I find it morally reprehensible,” she said. “If you don’t believe that people of color in your community, that their lives matter, then how can you represent them?”

Rosenoer, in her Twitter reply, wondered whether someone had paid for the video’s production, which needed to be reported to the secretary of state’s office.

“I’m sure you’ll hear from the SoS campaign finance violation team soon. Screenshotting this,” she wrote.

Betsy Hart, director of communications for the Colorado Department of State, clarified that anyone who acts independently of a candidate and spends more than $1,000 needs to register an independent committee.

“If there was coordination, it would be reported as a contribution to the candidate, likely an in-kind contribution, and subject to contribution limits applicable to the office the candidate is running for,” she said. Hart added that it could be difficult to discern whether the anonymous account was acting independently and their level of expense.

A spokesperson for the Colorado Republican Party said he had never heard of the account. The Douglas County GOP, which replied to a @ewe_too tweet by calling Wilson “extreme to the core,” did not respond to a request for comment. Twitter also did not respond to questions about why the account is defunct.

The campaign of Lisa Neal-Graves, the Democratic candidate running in District II, said she has not received the same level of online trolling as Wilson.

Rosenoer speculated about the type of person who might be behind the account. She called the video “shiny” and said it had a strong political narrative.

“Kudos to them if they made it on a laptop all by themselves,” she said. “It was an obviously well-put-together and expensive attack ad targeting what is truly a pretty small race in a suburban county. That is originally what raised my suspicions.”

She believes the author is likely not an established Republican operative. If so, she theorized, they would likely want to claim credit for their efforts. “They have some sense of what to do,” Rosenoer added. “They’re paying attention and they’re really angry, but they’re not professional enough to do this work the right way. That strikes me as a county party type of person.”

Wilson did not offer a guess as to who might be behind the attack account. Some Twitter users noticed that Wilson’s opponent, Republican incumbent Commissioner Lora Thomas, was one of the small group of followers. Some openly accused her of being the one tweeting.

“Really stooping to a new low here Lora,” wrote one person in a reply to @ewe_too. Thomas did not respond to a request for comment, and there is no evidence that Thomas had any involvement with the tweets. (Following publication, Thomas clarified that her campaign was not responsible for @ewe_too.)

Despite the low level of engagement with the account, the person behind it was aware of the accusations being lobbed. On July 22, the user wrote, “Sorry y’all, I’m a real person. Reporting me to Twitter won’t stop the truth from getting out!”

While the anonymous account primarily focused on policing and the racial justice movement, it also pivoted at times to attacking Wilson on gun control (“gun grabber" and "more dead kids,” it wrote) and the COVID-19 pandemic. In response to Wilson’s support for Douglas County remaining a part of Tri-County Health Department rather than withdraw, @ewe_too alleged on July 18 that she “wants to force you to wear [a mask] while mowing the lawn, jogging on a trail or sitting on your porch.”

Rosenoer and Wilson both said they were aware of attacks on past Democratic female candidates. In Wilson’s case, she said received threats during her previous political involvement before running for commissioner, which prompted her to purchase security cameras for her home and talk with the sheriff’s office. One tweet from @ewe_too struck her as particularly noxious.

In February 2019, Wilson visited the state capitol with her son, where he testified in favor of a comprehensive sex education bill that was also controversial. On July 25, @ewe_too tweeted a picture of Wilson from the capitol standing next to a friend’s child.

“They used my friend’s child in their disgusting tweet. And that’s completely out of line,” she said. “It just shows the depths to which they will sink to be partisan.”

This article has been updated.

In the midst of a heated discussion on a gun store’s Facebook page, a local Republican Party leader in Parker sent a message to another user s…