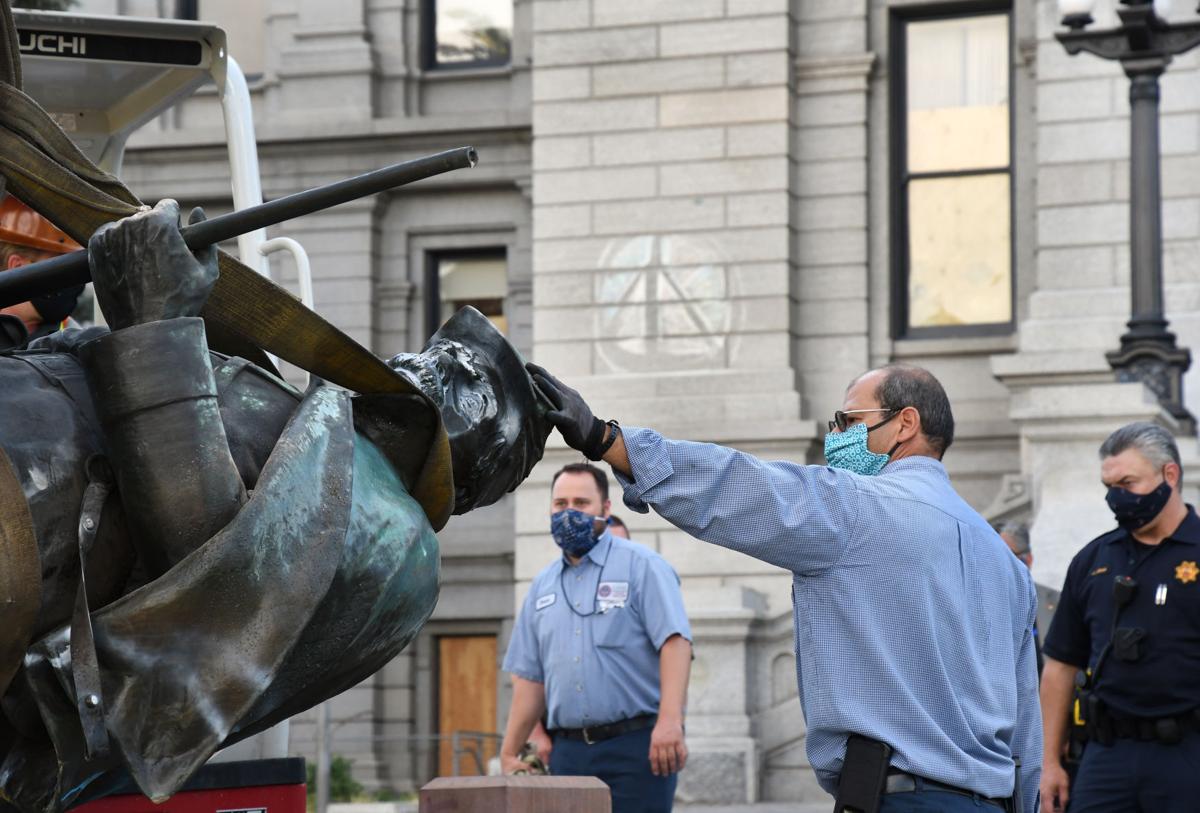 Crews remove a Civil War statue in front of the Colorado State Capitol on June 25, 2020 in Denver, Colorado. The statue had been toppled the night before. 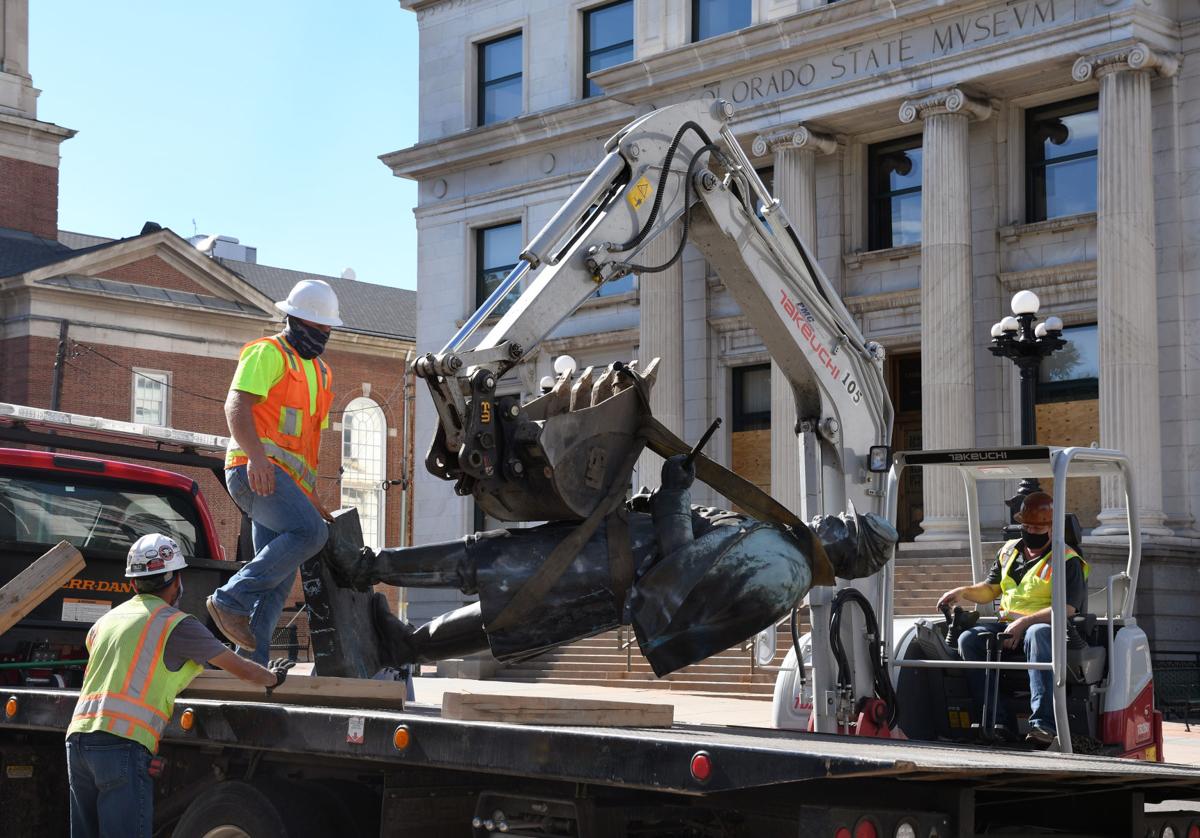 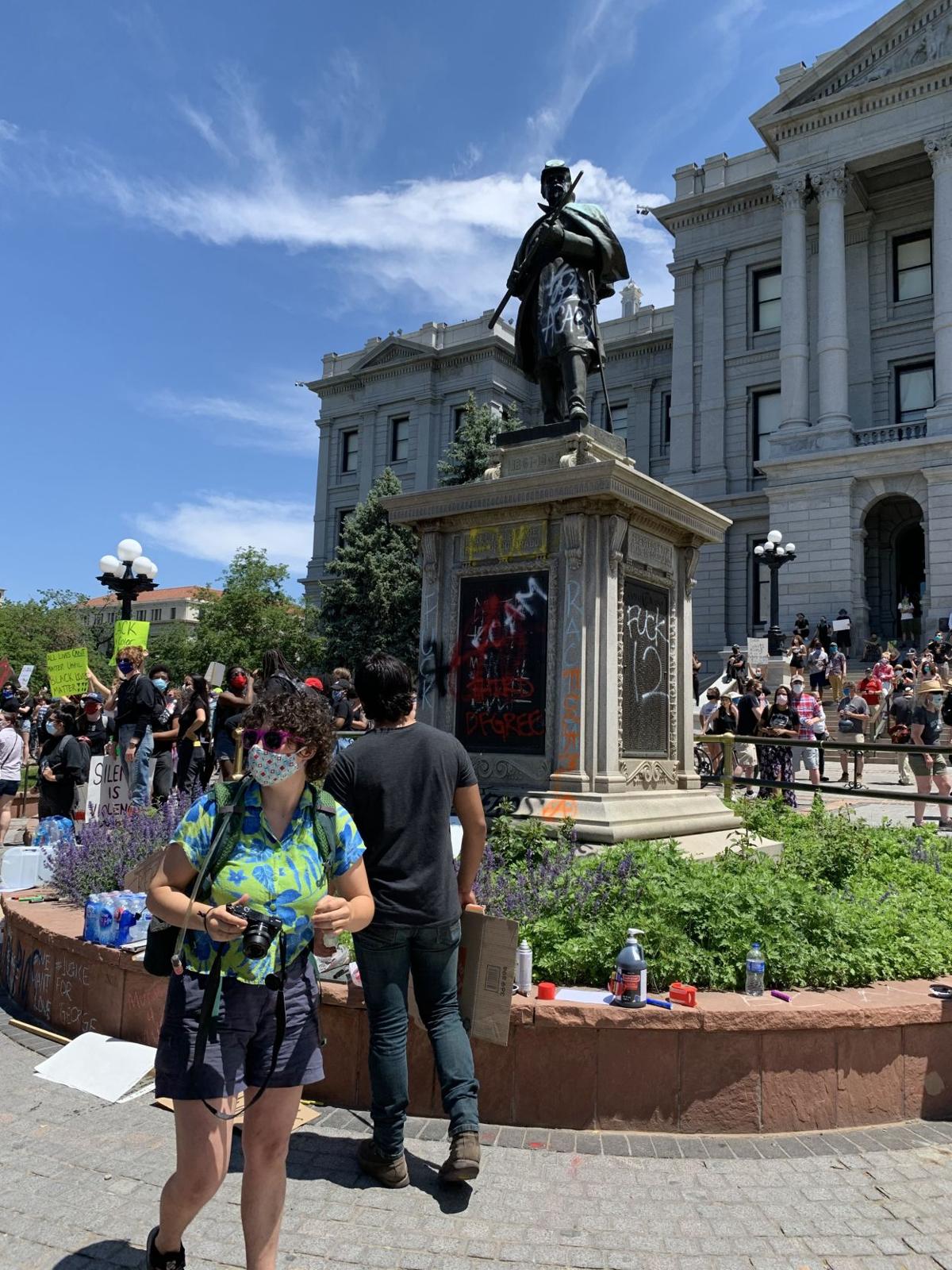 The Civil War statue on the west side of the state Capitol, May, 2020 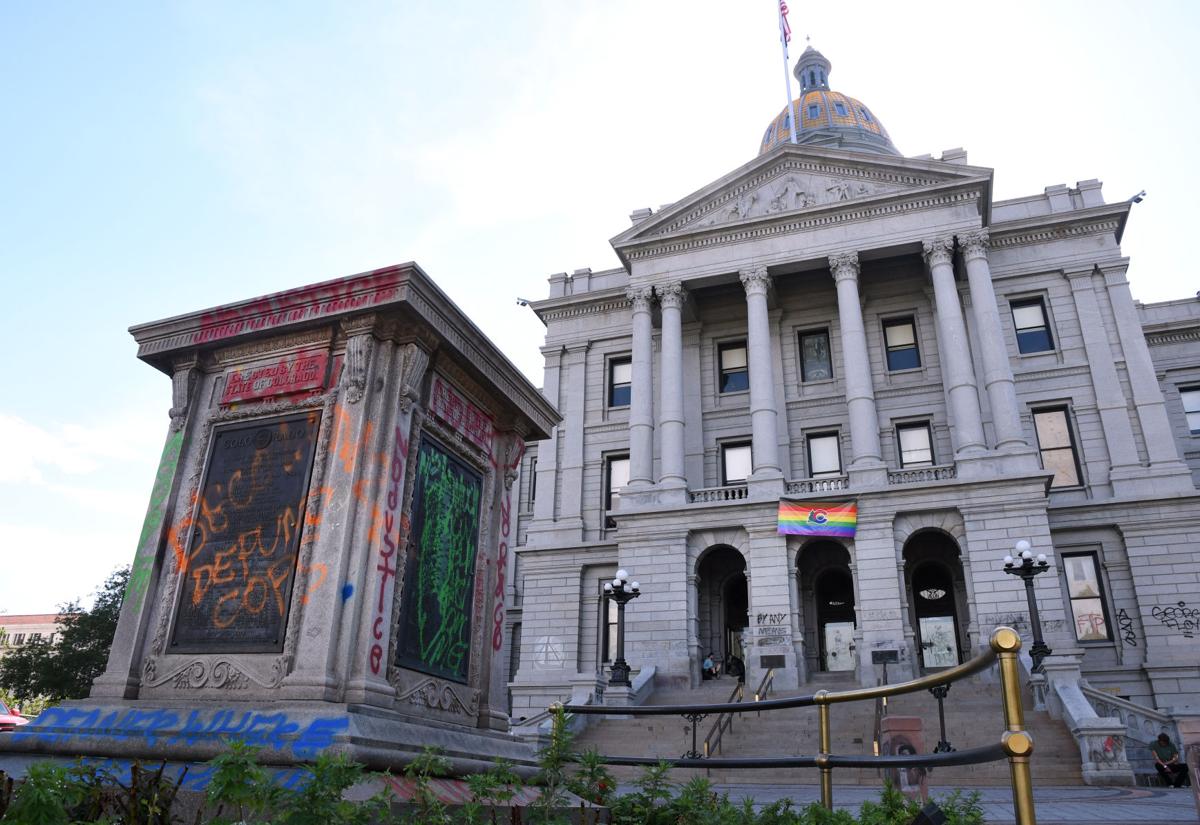 The pedestal covered in graffiti sits alone after crews remove the Civil War statue that rested on top in front of the Colorado State Capitol on June 25, 2020 in Denver, Colorado. The statue had been toppled the night before.

A statue of a Civil War soldier that has adorned the west side of the state Capitol since July of 1909 and long criticized for its link to the Sand Creek massacre was pulled down around 1:30 a.m. Thursday morning, according to the Colorado State Patrol.

The statue's destruction is under investigation by Denver Police.

Gov. Jared Polis issued a statement Thursday condemning the damage and promising to repair it. "I am outraged at the damage to a statue that commemorates the union heroes of the civil war who fought and lost their lives to end slavery.

"This statue will be repaired, and we will use every tool at our disposal to work with Denver Police, and to hold accountable those responsible for the damage whether they are hooligans, white supremacists, confederate sympathizers, or drunk teenagers."

According to state archives, the statue of the cavalryman, dismounted with rifle in hand, "honors the Colorado soldiers who fought and died in the Civil War." It was designed by Captain Jack Howland, a member of the First Colorado Cavalry, and originally built in 1906. According to the Smithsonian, citing the Denver Public Library, the bronze statue was built at a cost of $15,000 "and was Denver's tribute to Colorado volunteers who fought for the North in the Civil War, and it also represents defiance of Southern Rebels."

But it has another connotation, which is even inscribed on its granite base, for Black Lives Matter protesters and their allies.

Colorado was designated a territory shortly before the Civil War broke out in 1861, according to state archives. The First Colorado Cavalry, the state's first cavalry regiment, was formed in November 1862 from two previous volunteer units, and converted from infantry to cavalry (horse soldiers) by the U.S. War Department "because cavalry troops were more effective for Indian-fighting purposes."

In 1864, the First Colorado Cavalry began the Indian Wars. Their most infamous act was the slaughter of 230 Arapaho and Cheyenne at Sand Creek. Half of those who died were women and children. The massacre, which was under the command of Col. John Chivington, was conducted by 675 troops, which included 200 from the First Colorado and the majority from the Third Colorado, which is also saluted on the statue.

The Sand Creek massacre is listed on the base of the statue as a "battle" in which Civil War cavalries participated.

In 2014, then-Gov. John Hickenlooper apologized to the Native Americans on behalf of Colorado on the 150th anniversary of the massacre. The Sand Creek Massacre National Historic Site was dedicated in 2007.

Doug Platt, the public information officer for the state Department of Personnel and Administration, was there Thursday morning when a crane lifted the statue and put it on a truck for hauling away. DPA is responsible for maintaining the Capitol Complex, which has suffered extensive exterior damage from spray-painted graffiti, broken windows and other damage. Platt said they're watching all nine buildings in the Capitol Complex that begins north of Colfax and extends to 13th Avenue along Sherman Street.

"[The buildings] all seem to be symbolic," Platt said. "We're observing what's going on and reacting to what we discover from day to day, and trying to keep the Capitol grounds as secure as possible." Platt said he has not yet heard of any discussions around what would happen to the statue's base or the statue itself.

On June 1, the Executive Committee of the Legislative Council — the six leaders of the General Assembly — met with Rick Lee of DPA, who manages the Capitol complex. He could not provide an estimate on what it would take to repair the damage, and Platt echoed that Thursday.

"It's still in flux," Platt said. The statue's destruction "is a perfect example" of a lack of a final estimate of what it will cost. "Anything we evaluate is a potential for more damage," he said.

Kenny White of Denver was at the Capitol on Thursday just before the crane arrived. He said he spit and stomped on the head of the statue before it was moved.

White said the soldiers who participated in Sand Creek took souvenirs, including body parts, from those they killed. "People don't know about this because Colorado has tried to hide it."

But White says he is focused on more important issues, such as defunding the police, which he interprets as putting more social workers and mental health workers into the community rather than allowing police to respond to those situations. He said only 3% of 911 calls require a police officer with a gun, and that it would be better bring in people who have more training with those with mental health issues. "Someone who's having a bad day" does not need someone to respond with a gun, he said.

In addition to setting fires, protesters threw rocks through windows and in one case, managed to leave an unexploded Molotov cocktail in a men's restroom of the Department of Education building.