Some of the state's largest business organizations are urging the state legislature to slow its roll and think deeply about the unintended consequences of a public option insurance plan.

Democratic Rep. Dylan Roberts of Avon and Sen. Kerry Donovan of Vail are working with all interests to craft the legislation to create the public option plan, a public-private insurance carrier who could compete the private market in underserved areas to pull down soaring premiums by managing health care costs imposed by hospitals and drugmakers. 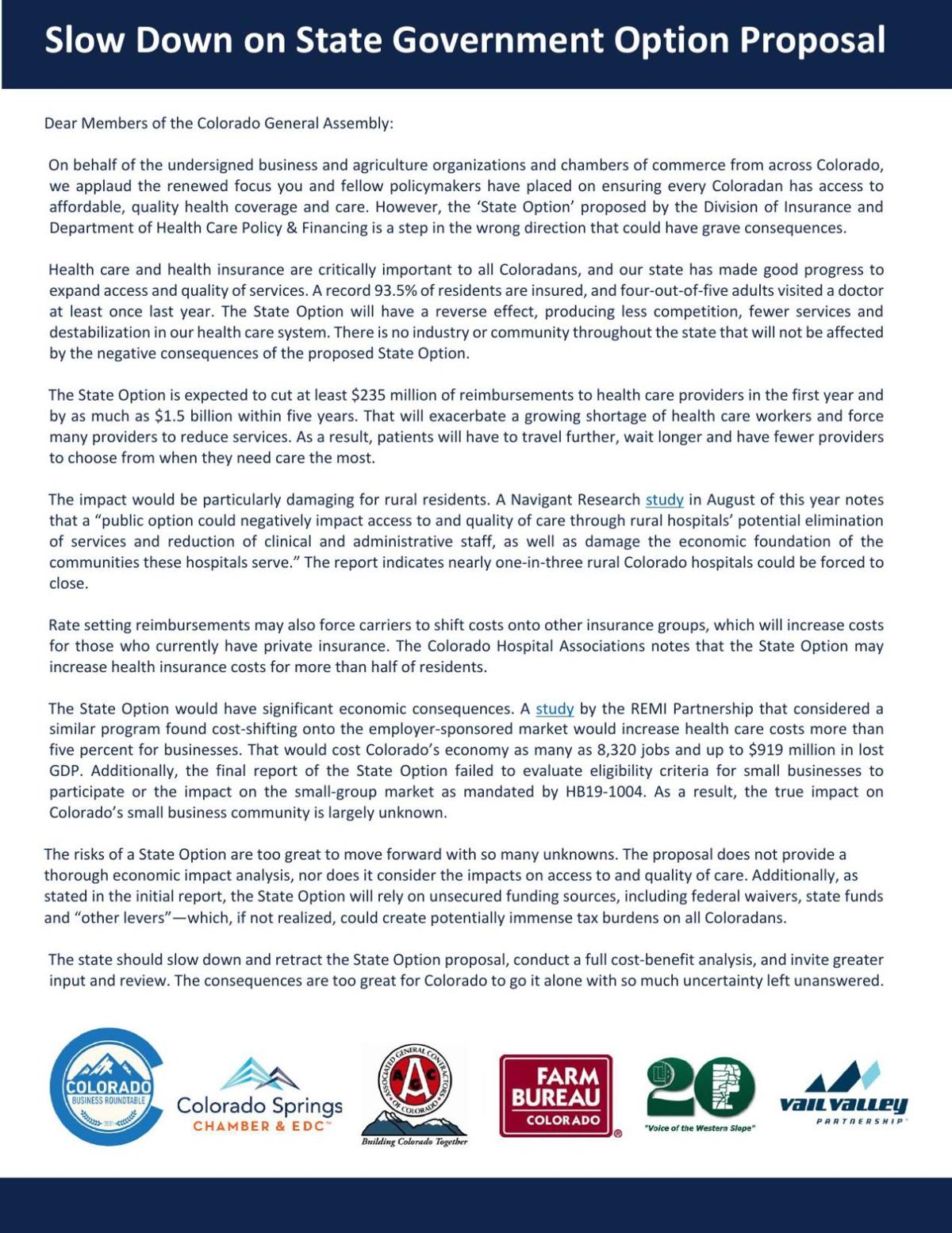 That has the health care industry and many other businesses nervous about the state trying something innovative that's failed nationally and in other states.

“There is no industry or community throughout the state that will not be affected by the negative consequences of the proposed State Option,” according to a joint statement released Monday.

It continues, “Slow down and retract the State Option proposal, conduct a full cost-benefit analysis, and invite greater input and review. The consequences are too great for Colorado to go it alone with so much uncertainty left unanswered.”

Dirk Draper, president and CEO of the Colorado Springs Chamber and EDC, said employers have a big stake in high-quality health care.

"The state-government option is likely to make that harder by pushing insurers out of the state and creating more one-size-fits-all health coverage options," he said. "And it may increase private health care costs, which can make the difference between hiring a new employee, investing in capital or growing a business.”

The coalition is broad and strong. The Farm Bureau is the state's largest and best-known advocate for farming and ranching. Club 20 is made up of a long list of civic, business and government leaders from Western Slope counties, among the political heavy hitters.

“Health care is critically important to the more than 700,000 Coloradans who live in rural and agricultural communities," Chad Vorthmann, executive vice president of the Colorado Farm Bureau, said in a statement. "We need solutions that expand access to care and make coverage more affordable. Sadly, as proposed, the state-government option may have the opposite effect — hospital closures, service cuts and fewer insurance choices.

"We encourage Colorado lawmakers to put the proposal on hold until it can be fully analyzed and focus instead on solutions that get to the root of our health care problems.”

The opposition focuses on a report that came out last August to argue that lawmakers haven't done enough to parse the economic data or potential impacts to the access and quality of lower-cost health care.

On Sunday, Roberts characterized the joint statement as premature with outdated information.

He was bothered that some of the organizations that signed the statement represent rural areas, especially on the Western Slope, which are hardest hit by soaring premiums and little access to health care.

"We're trying to do something here to help people in those areas they represent," he said.

The statement, he said, seems to be based on "pure speculation and hypotheticals.”

The study pre-dated the broad proposal that was released in November, he noted. “We’re not accepting that whole-cloth," he said. "We’ve been working very closely over the last several months to craft something that works for as many people as possible, as many interests as possible.

“What we’re about to release is not going to look like the proposal, but the reason why it has not come out yet is because we do want to take our time and talk to everybody that will be impacted. For them to tell us to slow down is, frankly, ridiculous, because that's exactly what we're doing.”

Rep. Chris Kennedy, a Democrat from Lakewood, also is supporting the public option effort in the House and carrying legislation to manage contract costs between health systems and insurers, ideally curbing some costs.

"Coloradans have been suffering under the high cost of health care for far too long," he said. "I know that Rep. Roberts has been listening to stakeholders, advocates and partners on all sides of the issue and incorporating their feedback since he began crafting this legislation months ago.

"He is engaged in a deliberative and thoughtful approach to crafting this bill, and I look forward to considering it when it’s been introduced."