On Friday, a state Senate ethics panel will begin looking at an ethics complaint filed against Sen. Bob Gardner, a Colorado Springs Republican, tied to comments the senator made in a Senate Judiciary Committee meeting in 2019.

According to the timeline posted on the committee's website this week, the complaint could take most of July to work through and depending on the outcome, not be resolved until the 2022 session.

Attorney Chris Forsyth, who runs the Judicial Integrity Project, claims that Gardner may have violated Senate Rule 41, which addresses undue influence over state officials and conflicts of interest.

On Jan. 25, 2019, the House and Senate judiciary committees participated in a joint hearing that heard a presentation from the State Commission on Judicial Performance, a hearing in which Forsyth participated as a member of the public.

During that hearing, according to the complaint, Gardner said the following:

The complaint said Gardner admitted that he used his position to bring undue influence on another public official, the State Court Administrator, to get a different judge assigned to his colleague's case.

"Given Gardner's actions, the bill also proposes to expand Gardner's power to call the state court administrator and inappropriately control what judge hears a case," the complaint said. HB 1136 was signed into law on May 4.

Gardner told Colorado Politics that the complaint is without merit and he expects that it will be dismissed.

"What I'm really accused of is picking up the phone on behalf of another citizen," the same that every lawmaker does on behalf of constituents every day, Gardner said on June 11.

Friday's meeting is largely organizational, to review the complaint, and Gardner's response, submitted Thursday,  and some of the intricacies of the process.

If the latter is the committee's decision, within seven days they must hold an evidentiary hearing. Gardner can call witnesses at the hearing. If the committee holds that hearing, it would then make a recommendation at some later date, to be determined, to the state Senate, which would take final action after it convenes next January.

Gonzales sent a letter on Thursday to her fellow senators, asking them not to engage the committee members in any discussion of the complaint or proceedings.

In his response, dated Thursday, Gardner told the committee that the complaint filed by Forsyth is "interposed for the political purposes of the Complainant and should be dismissed by the Committee as early as possible in the preliminary investigation stage of these proceedings."

Gardner said he never asked the state court administrator to take any action on the issue brought to him by a constituent, a lawyer who was officed in the same building where Gardner has his law practice.

"I contacted the Administrator to express my concern about the discriminatory and prejudicial statements that had been made from the bench by a senior judge" who was under contract to the judicial branch and who was handling a divorce case where Gardner's constituent was one of the attorneys.

Senate Rule 41 specifically states that a lawmaker must exercise undue influence and do so for economic or private gain.

The third and fourth complaints are tied to Gardner's sponsorship of legislation in the 2021 session that expanded the number of senior judges, a bill that would help with the backlog of trials as a result of the pandemic. Gardner pointed out that he had nothing to benefit from, either economically or privately, from the bill, nor is it a conflict of interest.

As to Forsyth, Gardner said that the Judicial integrity Project "takes a very aggressive approach to these matters as demonstrated by their website, which in the course of its advocacy, engages in highly personal attacks on judges, Judicial Department officials and legislators."

Forsyth and the project have a First Amendment right to do so, Gardner wrote, but a review of the website shows Forsyth's motivations and the tactics he uses to achieve his ends.

"This meritless and unsubstantiated complaint is just one more instance of Mr. Forsyth's very personal, guerilla political tactics to both coerce and intimidate public officials and gain notoriety for himself and his organization."

The ethics committee meeting is scheduled to begin at 9 a.m. on Friday. 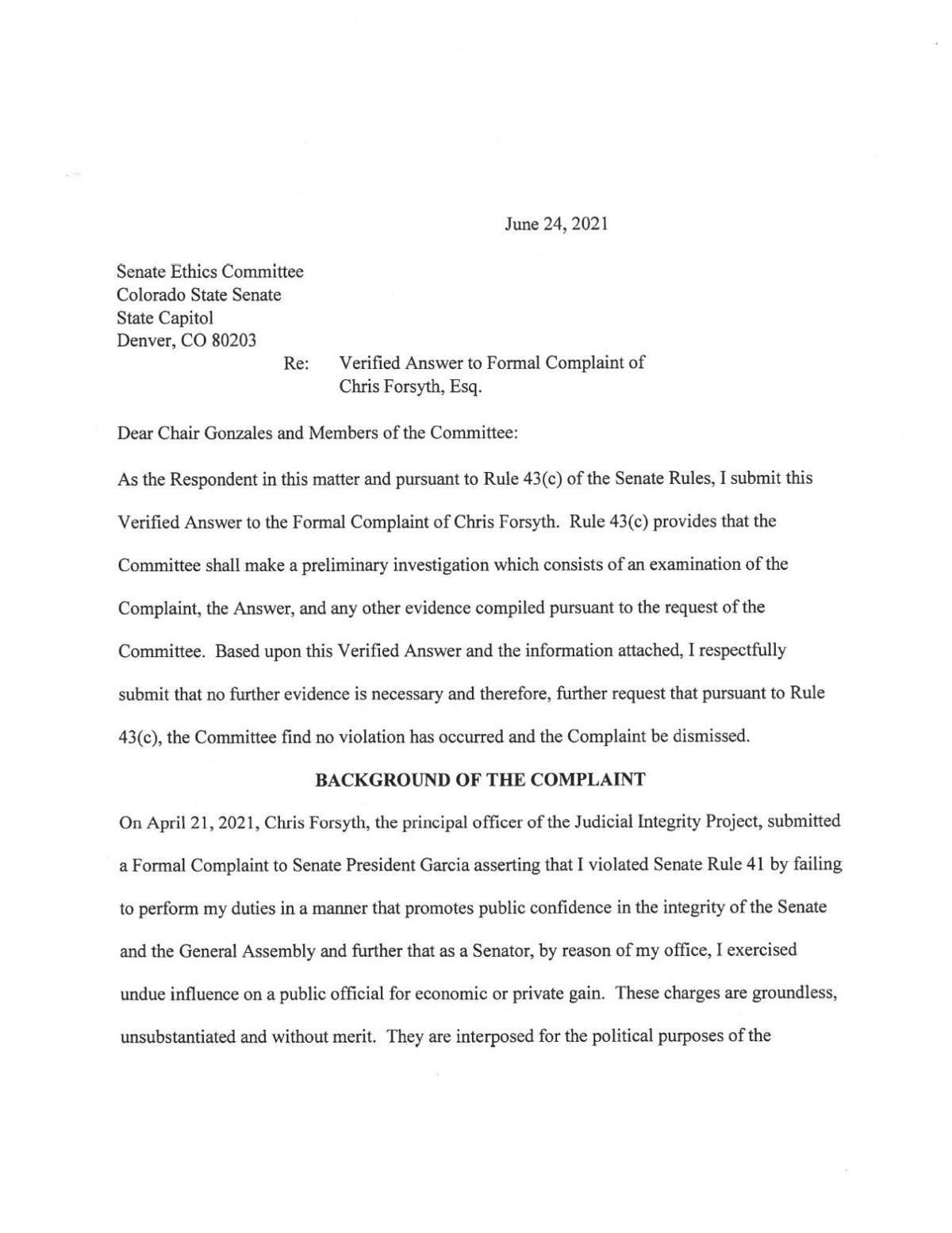 State Sen. Bob Gardner, a Colorado Springs Republican, spoke to Colorado Politics Friday evening about the ethics complaint filed against him by Chris Forsyth of the Judicial Integrity Project.