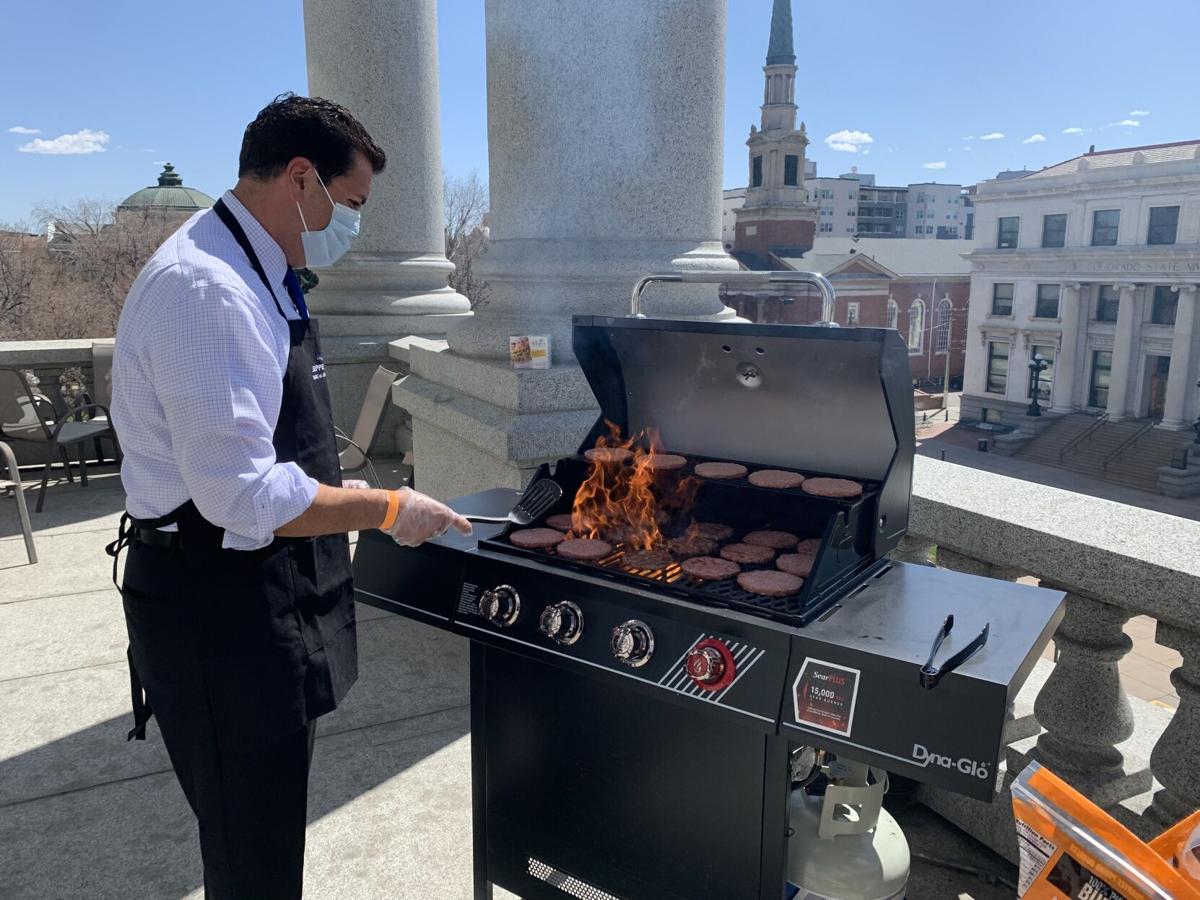 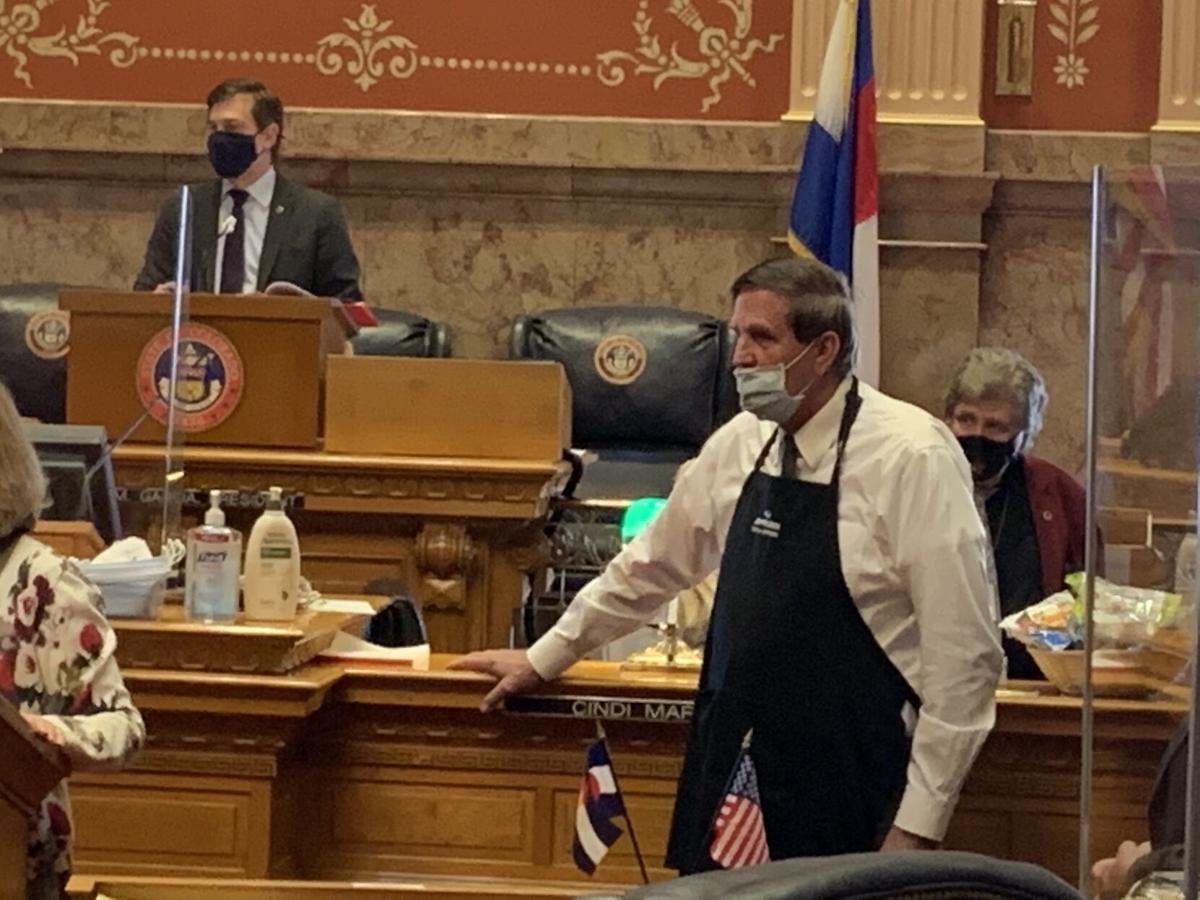 Sen. John Cooke, R-Greeley, takes a break from grilling to debate an amendment to the Long Appropriations Bill, April 8, 2021.

A year after the Joint Budget Committee was tearfully forced to take a massive $3.4 billion ax to the general fund, lawmakers went on a spending spree Thursday while hammering out details on Senate Bill 205. By day's end, the Senate had added $33.5 million to the budget, with $21.8 million coming from general fund dollars.

It’s been the craziest swing in budgeting the JBC members have ever seen, said Sen. Dominick Moreno, D-Commerce City, the committee's chair. The group restored almost all of those cuts in the current year's budget and was still able to build up state reserves and pay down the debt to K-12 and the state pension plan for next year's budget, which begins on July 1.

Senators drew up 38 amendments to SB 205, with more than one-third dealing with transportation projects, all offered by Senate Republicans. Those weren’t successful, but 14 others from both sides of the aisle (and many with bipartisan sponsorship) were added.

JBC members reminded their colleagues that any changes to the budget involving general fund dollars would draw down the rainy day fund — known as the general fund reserve — that is proposed to reach historic levels: $1.7 billion in the 2021-22 budget, or 13.54% of general fund appropriations. “We need to have a reserve that is up to the task,” said JBC member Sen. Chris Hansen, D-Denver.

Hansen also noted there are significant federal dollars on their way to Colorado, some directly to school districts, to city and county governments; and $3.9 billion to the state. “We tried to craft a budget that complements that package” and would use federal and state dollars carefully.

But Republicans would prefer to see those dollars spent on projects that could help Colorado recover from the recession. “The 30-year average of reserves is 3%,” noted Sen. Paul Lundeen, R-Monument. He questioned whether the state should salt away money in its bank account, or use it on projects that will return economic activity, restore jobs and help K-12 students catch up on ground they’ve lost due to the pandemic. “The question that we debate today is one of priorities,” Lundeen said.

Lundeen also pointed out that the federal dollars come with guidelines on how those dollars should be spent. “We need to pick priorities today and get businesses back on their feet ... and not let the crisis of the pandemic push the other crisis we have, on roads and bridges.”

Republicans had 14 amendments on transportation, from a laundry list of projects approved by the Colorado Department of Transportation in its 10-year strategic plan, to individual projects in southern Colorado and on the Western Slope. One , a $176 million general fund request offered by Sen. Rob Woodward, R-Loveland, was for roads traveled on by tourists.

Not one of those amendments won approval from the Democrat-controlled Senate.

And despite the fondness of Sen. Bob Rankin, R-Carbondale, for Firehawk helicopters, an amendment by Sen. Larry Liston, R-Colorado Springs, to allow the state to buy another one failed to lift off. Rankin had been the sponsor of a law recently signed by Gov. Jared Polis that allows the state to buy a Blackhawk helicopter and have it retrofitted to fight wildfires.

The debate is about balance between mitigation, suppression and restoration, and which dollars to use, Rankin said as he called for a “no” vote on the amendment.

Usually, the Long Bill escapes the Senate with modest changes. On Thursday, however, there were a surprising number of amendments that succeeded.

It started with an amendment that boosts funding by $10 million for children with the most severe disabilities in K-12 education. The amendment was offered by Sen. Rachel Zenzinger, D-Arvada and Senate Minority Leader Sen. Chris Holbert, R-Douglas County.

Tier B students are eligible, under statute, for $6,000 on top of the base per-pupil funding. However, they aren’t getting the full $6,000; it’s about 43.8% of that, which included only an inflationary increase in 2021-22. The Zenzinger/Holbert amendment would bump that up to 50.9%. Zenzinger explained that once the funding is boosted to that level, it has to be continued in future years, so they were careful on the numbers. The money will come from the state education fund.

The Tony Grampsas Youth Services Program in DHS, a popular program that lawmakers often try to increase funding for, did get an additional $1.04 million in general fund. The program is named for the late Republican lawmaker from Golden who chaired the Joint Budget Committee in the mid-1990s.

Another $5 million in general fund would be added to the housing grants budget in the Department of Local Affairs for housing assistance for undocumented immigrants.

One amendment that didn't show up: repaying the state's severance tax cash fund, which has been tapped multiple times over the past 20 years for budget-balancing. The fund gets its money from tax revenues paid for by companies that "sever" minerals from the land, which can be oil and gas, coal or minerals such as molybdenum, gold or gypsum. The cash fund pays for the cost to mitigate the impacts of that activity in local communities, and some funds are directed to water projects authorized by the Colorado Water Conservation Board. The fund has been tapped for at least $300 million over the past decade.

The Long Bill will be up for a final Senate vote on Friday and then heads to the House.

'Colorado Politicking' tells you all you need to know about statehouse doings, and more

Colorado Politics has launched a weekly conversation on the top news coming from the #COpolitics universe, and this week's installment features legislative reporters Pat Poblete and Marianne Goodland along with senior writer Joey Bunch.