After more than two weeks of delays and hundreds of hours of negotiations, sponsors of House Bill 1232, the Colorado Health Benefit Option Plan, are moving ahead with another new version of the bill.

Sources have said that the bill is being grudgingly accepted by some, but not all, of the opponents. The new version is to be rolled out at a 3 p.m. press conference with the bill sponsors: Reps. Dylan Roberts, D-Eagle; Imah Jodeh, D-Aurora, and Sen. Kerry Donovan, D-Vail. Speaker of the House Alec Garnett, D-Denver, who has been involved in the negotiations, also will join the press conference.

As introduced, House Bill 1232 gives the healthcare industry — doctors, hospitals and health insurers — two years to reduce health insurance premiums by 20% (10% per year) in the individual and small group market. The individual market is about 8% of insured Coloradans; the small group market, which is small businesses with 1 to 100 employees, is about 15% of insured Coloradans.

If the premium targets are not met after two years, in the third year, the Commissioner of Insurance would come up with the Colorado Option Health Benefit Plan, with its major provision setting price caps on health care services provided by hospitals and doctors. Hospitals, doctors and insurers would be required, under the bill as introduced, to offer the standardized plan. Hospitals and doctors that refuse could risk their licenses.

The goal of HB 1232 is to promote equity within the healthcare market, to address deficits in health care for rural Coloradans, underrepresented people of color and undocumented immigrants.

The House Health & Insurance Committee reviewed HB 1232 in a 10-hour hearing on April 9, but the committee postponed action on the bill while negotiations continued with the healthcare industry. Part of that strategy appeared to be to split the opposition, with doctors being removed from the bill in one version. But that led to objections from the insurers, which asked how they were to achieve premium reductions without doctors being required to lower prices for services.

Among the major changes in the strike-below that will be reviewed by the House Health & Insurance Committee — a hearing is scheduled for Tuesday — is in its definition of hospitals. Opponents have claimed the bill could put rural hospitals out of business, given that the original bill made no distinction between urban and rural hospitals on issues such as price. Under the strike below, rural hospitals with 25 or fewer beds are defined as an essential access hospital.

The Commissioner of Insurance would be allowed to set rates for hospital services at 155% of Medicare reimbursement rates. A hospital that is defined as either essential access, independent or not part of a health system would be allowed to charge 20% above that rate. Additionally, an essential access hospital that is not part of a hospital system can charge 40% above the Medicare reimbursement rate.

Under the amendment, the healthcare industry is given a third year in which to achieve premium reduction targets, and those targets are reduced from a total of 20% over two years from the original bill to 18% over three years. Carriers that fail to meet the reduction targets would be given a chance to show, through an action plan, what they've done to try to achieve those targets. Carriers also have the option of entering into nonbinding arbitration, although that will not delay the rollout of the state's public option plan, the amendment said.

Hospitals that are "efficient in managing the underlying cost of care as determined by the hospital's total margins, operating costs and net patient revenue" will receive a 40% increase in their base reimbursement rate, according to the strike-below.

The amendment also appears to give health plans some wiggle room on where they must offer the state option plan. The commissioner of insurance must take into account the number of covered lives the carrier has in each county (this would also include the large group market), the carrier's existing service areas and whether alternative health-care coverage is available in that county, including cooperatives.

In addition, the strike-below says that the Commissioner of Insurance will not hold a carrier responsible for failing to meet premium reduction targets if the carrier identifies which hospitals or health-care providers "were the cause of the carrier's failure to meet the premium rate requirements."

The requirement that doctors and hospitals offer the standardized plan or risk their licenses is also gone. 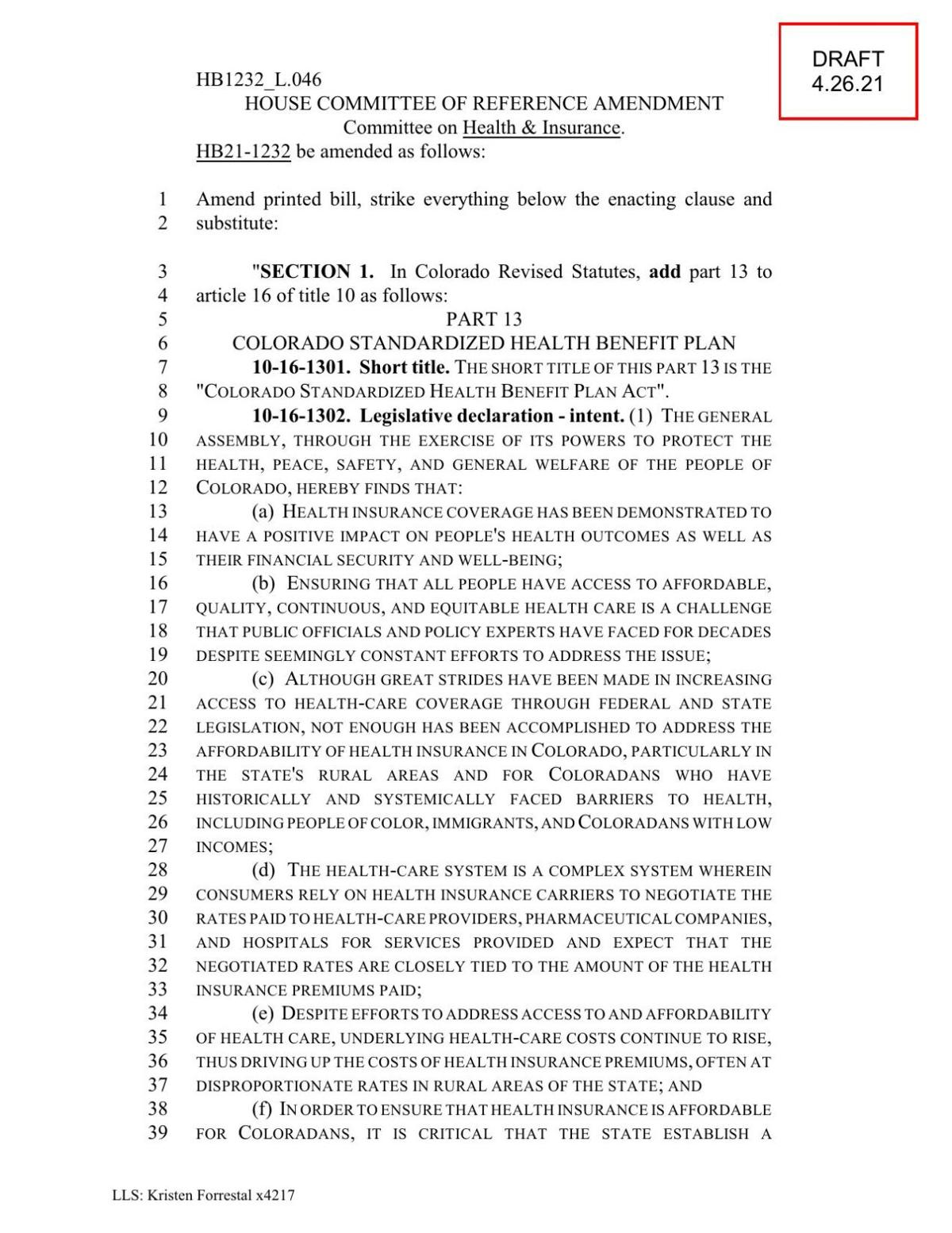 On the third try, House Bill 1232 got in front of the House Health & Insurance Committee Friday in a 10-hour hearing that drew more than 100 witnesses to the Capitol or to testify remotely.