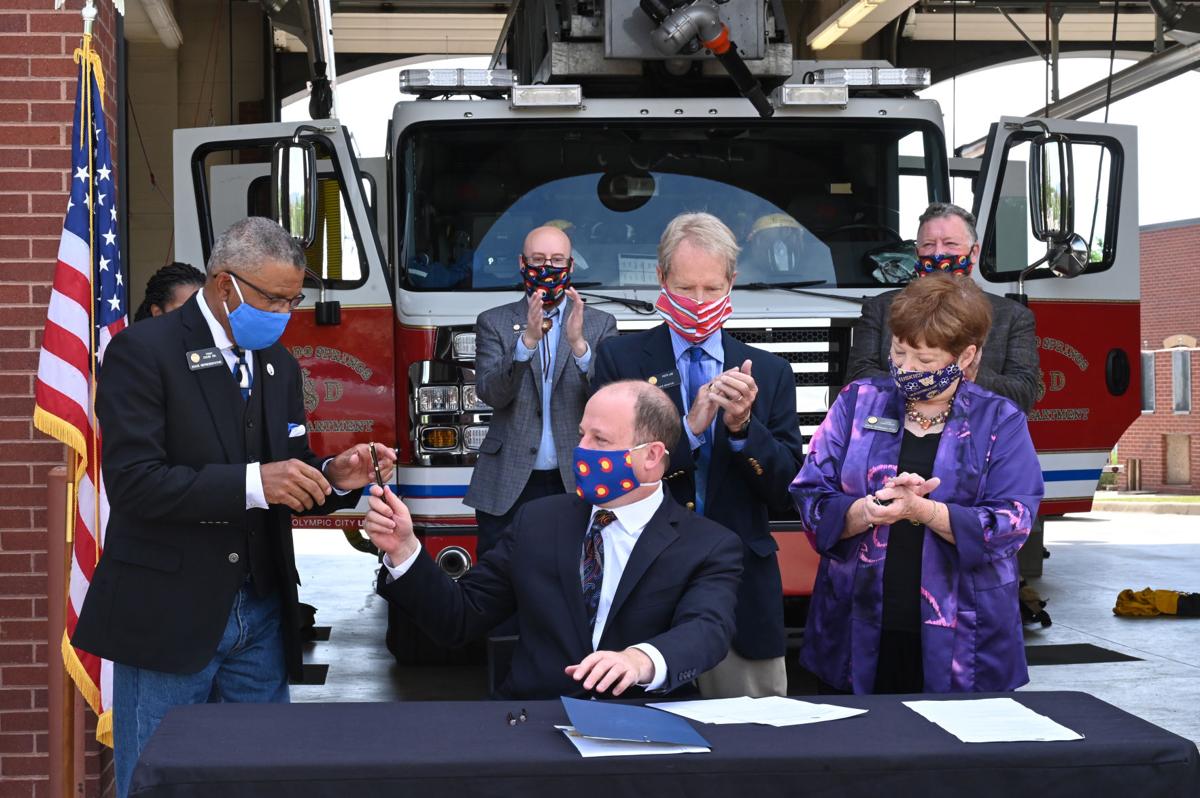 While doing a bill signing tour of the Front Range, Colorado Gov. Jared Polis stopped to sign five bills on Monday, June 29, 2020, at Station 8 of the Colorado Springs Fire Dept. Two of the bills are meant to protect Coloradoans from the effects of toxic firefighting foam. They were sponsored by bipartisan El Paso County lawmakers, Rep. Lois Landgraf (R), Sen. Pete Lee (D), and Rep. Tony Exum, Sr. (D) (right to left, front). The governor hands a pen to Rep. Tony Exum, Sr., who was a battalion chief with the Colorado Springs Fire Dept. (Photo by Jerilee Bennett, The Gazette) 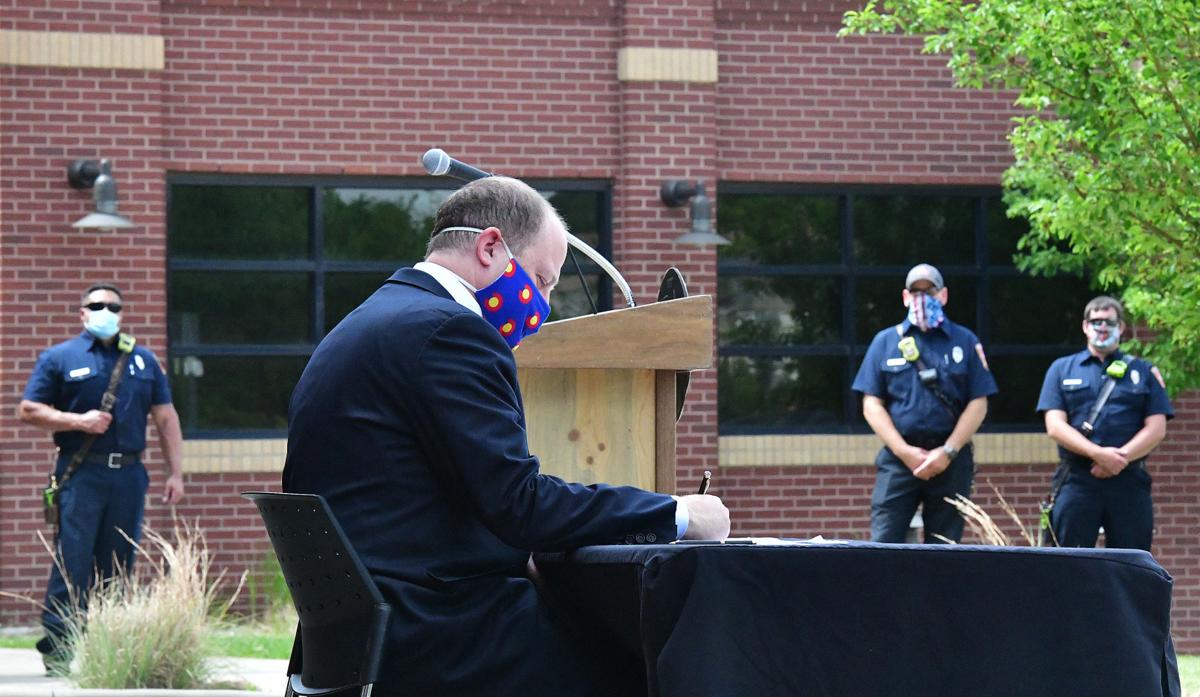 While doing a bill signing tour of the Front Range, Colorado Gov. Jared Polis stopped to sign five bills on Monday, June 29, 2020, at Station 8 of the Colorado Springs Fire Dept. Some of the firefighters look on as the governor signs one of the bills into law. (Photo by Jerilee Bennett, The Gazette)

Gov. Jared Polis signed a variety of bills throughout the Front Range Monday, including two he said will help protect Coloradans from the effects of a toxic foam used in fire fighting.

The chemicals were used for decades in household items, as well as in a firefighting foam, and have been used at Peterson Air Force Base, the Air Force Academy and hundreds of other military installations around the world, according to the U.S. Department of Defense. They have been potentially linked to health ailments, including cancers, liver disease and high cholesterol, according to the U.S. Centers for Disease Control and the American Cancer Society.

In 2016, the U.S. Environmental Protection Agency warned that water in the Widefield aquifer exceeded a health standard for perfluorinated compounds of 70 parts per trillion, requiring the construction of water treatment plants to deal with the pollution.

The prime sponsors if HB20-1119 were Reps. Tony Exum and Lois Landgraf, a Democrat and Republican, respectively, and Sens. Dennis Hisey and Pete Lee, a Republican and Democrat, respectively. All reside in El Paso County.

Exum, a retired Colorado Springs Fire Department firefighter of nearly 36 years, said he hopes Congress will pass a similar bill and that the Federal Aviation Administration will allow use of PFAS-free firefighting agents, as some counterparts in Europe have done.

"It doesn't work as fast, but I think we as a country need to get to a place where we get rid of this product, because it does have a lot of harmful health effects," he said.

The bill is a follow-up to last year's HB19-1279, Protect Public Health Firegfighter Safety Regulation PFAS Polyfluoroalkyl Substances, of which all four El Paso County lawmakers were prime sponsors. That bill prohibited the use of class-B firefighting foam that contains intentionally added PFAS for training and/or testing, and created a civil penalty for such use. It also prohibited the sale of such foam in certain circumstances.

SB20-218 provides for additional sampling and tracking of toxic foam, as well as a take-back program for disposing of the chemical and assistance for affected water supply systems, Polis said.

The bill creates an $8 million program — paid for by a $25 per-truckload fee assessed to fuel manufactures — to fund the assistance without burdening taxpayers, said Rep. Jonathan Singer, a Longmont Democrat and a prime sponsor of the Senate bill. He called the substances "forever chemicals that need to be disposed of the right way."

"When any of us turn on the tap, we need to know the water we're drinking is safe," Singer said. "The last thing you want to do is pour this down the drain or make this someone else's problem."

Polis signed the PFAS-related bills in Colorado Springs before heading to Pueblo and Fishers Peak near Trinidad for additional bill signings related to a variety of issues, including rural economic development and protection for utility customers, before signing education-related bills in Pueblo and a marijuana-related bill in Denver.