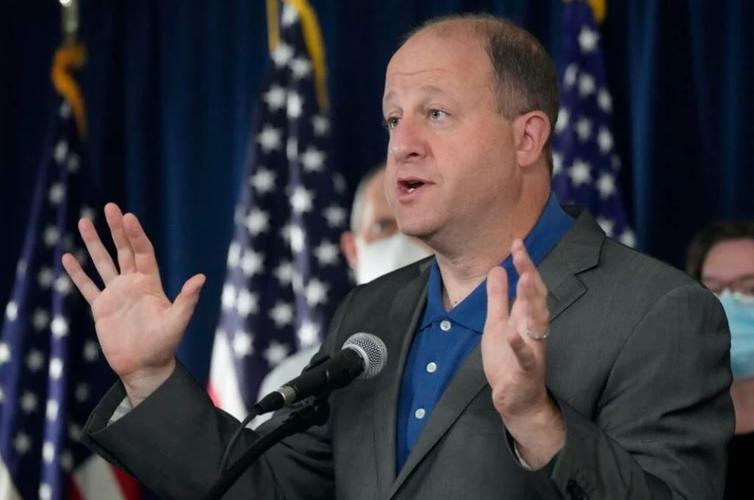 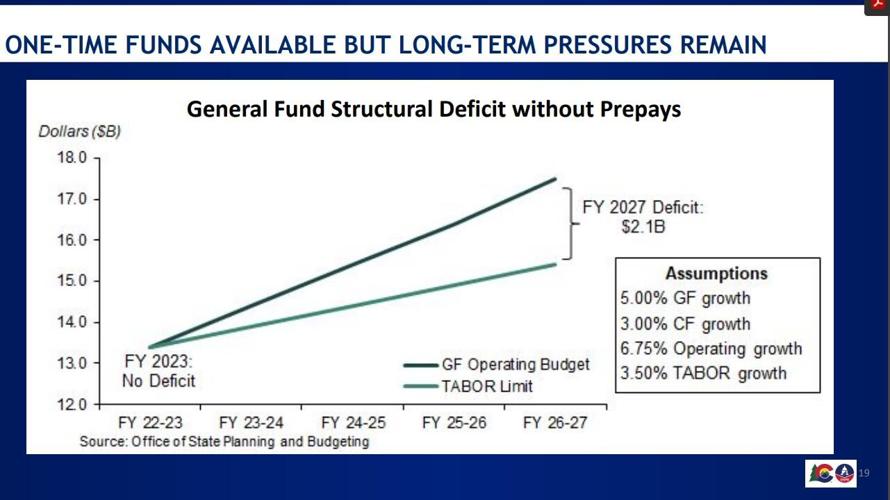 A looming structural deficit has some lawmakers worried about the future of Colorado's finances. Chart courtesy of the Office of State Planning and Budgeting

Gov. Jared Polis on Friday presented his 2022-23 budget to the Joint Budget Committee, whose members quizzed him on why he isn’t putting more money into higher education and how he intends to address a looming structural budget deficit.

The governor also took aim at those spreading misinformation about COVID-19 vaccines, saying it is causing Colorado hospitals to fill with unvaccinated patients.

He said Coloradans are frustrated by the ongoing pandemic, and expressed his own frustration with misinformation that he blames for endangering public health and, in many cases, killing Coloradans.

Polis said he’s proud that 80% of adult residents in the state have been vaccinated.

“Despite that success, our hospitals remain filled, largely with unvaccinated Coloradans, many of whom are victims of misinformation campaigns and targeted lies that are being spread about the life-saving vaccine,” he said.

Polis’ presentation to the budget-writing committee said the next fiscal year budget of $40 billion “doubles down on my commitment to saving Coloradans money, fighting pandemic-induced inflation by putting money back in their paychecks, and protecting the Colorado way of life.”

The proposal is focused on four areas:

“The common-sense proposals outlined in my budget are things Coloradans will be able to see, feel and find helpful in their everyday lives. This budget proposal will help move our state forward and continue to build a Colorado for all,” he said in a post-presentation statement.

JBC Chair Rep. Julie McCluskie, D-Dillon, called Polis’ proposal “a solid foundation” for the upcoming work of the JBC as its members craft the next fiscal year's budget.

Polis pointed to elements of his budget proposal, including implementation of tobacco tax-funded preschool, which starts in fall 2023; $450 million toward K-12 education; and, another $150 million to bring down the state’s debt to K-12 education, known as the budget stabilization factor. Another $300 million is proposed to continue to bring down that debt, which reached a peak of $1.174 billion after budget cutting in fiscal year 2020-21.

Another $30 million would renovate state and higher education buildings to provide child care. The budget includes $104 million in “fee relief,” including waiving fees so that Coloradans can start a business.

Under health care spending, one of Polis’ signature issues, $530 million would be spent over three years to transform home and community based services, including a mandatory minimum wage of $15 per hour for workers. He also proposes $113 million in public safety investments for a variety of programs, including in behavioral health.

To address the state’s runaway homelessness problem, Polis suggests $200 million, awarded through competitive grants, to local and private organizations, including the creation of two “recovery campuses,” similar to the program operating at the Fort Lyon Residential Center in Bent County.

Polis also added his two cents on how to spend $400 million in American Rescue Plan Act money, such as $100 million for infrastructure grants and $25 million for energy improvements in affordable housing.

Finally, Polis’ budget proposal suggests increasing the general fund reserve, Colorado’s version of a rainy day fund, to 15% of total general fund, which would bring it up to $1.9 billion.

It was Polis’ proposal on higher education that didn’t quite satisfy McCluskie.

“Reflecting on your opening statement that education is the single most important investment the state can make, I agree. I’m pleased to see your commitment to reduce the budget stabilization factor” and to implement universal preschool, McCluskie told Polis.

McCluskie, however, noted that Colorado has lagged the nation on both K-12 and higher education funding, and asked why the governor decided on just a 4.6% inflationary increase for higher education. She said that won’t meet inflationary and core costs at the state’s public colleges and universities.

“We don’t want to see additional costs flowing to students,” she said.

Polis responded that his proposed $182 million total increase includes $42.6 million for the institutions, funding for capital improvements and more money for financial aid.

“We look forward to more conversations with the institutions about their needs,” he said, adding, this money “is just the tip of the iceberg” in the budget, along with federal funds the institutions received tied to the pandemic.

Both JBC member Sen. Chris Hansen, D-Denver and Rep. Rod Bockenfeld, R-Watkins, sitting in on the hearing, brought up a structural budget deficit anticipated in the next several years.

According to Polis’ presentation, the structural deficit, which is estimated to be at zero in 2023, would balloon to more than $2 billion by 2027 without prepaying certain state obligations.

Hansen said after decades of TABOR, the state is already starting with a structural deficit this year and said he worries about not taking into account cumulative deficits.

Lauren Larson, director of the governor’s Office of State Planning and Budgeting, said the presentation shows a balanced budget with some funding needs left off the table. A chart on the structural deficit is intended to show how quickly that deficit would grow without prepaying obligations and deficit compound over time.

“We’re in an unprecedented time,” said Sen. Dominick Moreno, D-Commerce City, questioning whether policymakers should invest in a limited set of needs and make bold, transformational changes, or because there is so much need, they should spread the dollars out more to meet that need and in turn sacrifice making those bold changes.

Polis said one-time dollars from the federal government, to be spent over a couple of years, are better spent on transformational change, since those funds are not ongoing.

“But there is also danger in diluting it so thin ... that people don’t understand where the money is going. I would encourage us to make big changes for the state with these resources,” he said.

Sen. Bob Rankin, R-Carbondale, pointed out an omission in the budget proposal: lack of funding for rural Colorado. Rural communities often don’t have the ability for matching funds to navigate the projects in the budget, to write grants, or as he put it, “we don’t have the votes in the legislature to advocate” for some issues.

“I would like to see specific resources for rural communities to participate in programs, and water and fire management on the list of one-time needs,” he said, adding these federal dollars offer opportunities to support those priorities.

Polis replied that rural and urban schools all benefit from simple formulaic funding for public schools. He also pointed to funding for groundwater recovery, rural agriculture resilience and last year’s money to buy a new Firehawk helicopter to fight wildfires. As for the specific request for rural fire management in the next budget, Polis didn’t mention it.

Gov. Jared Polis sent his wish list for the next state spending plan to the General Assembly's Joint Budget Committee Monday, with a request to put $1.3 billion toward the lingering effects of the pandemic.