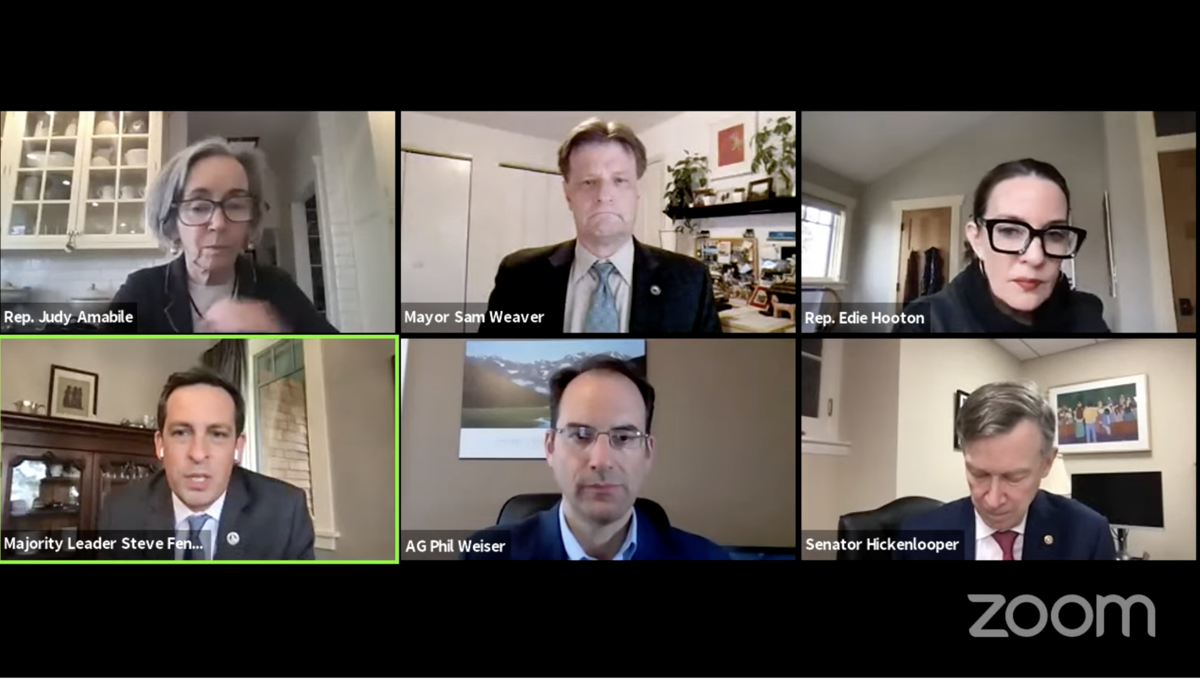 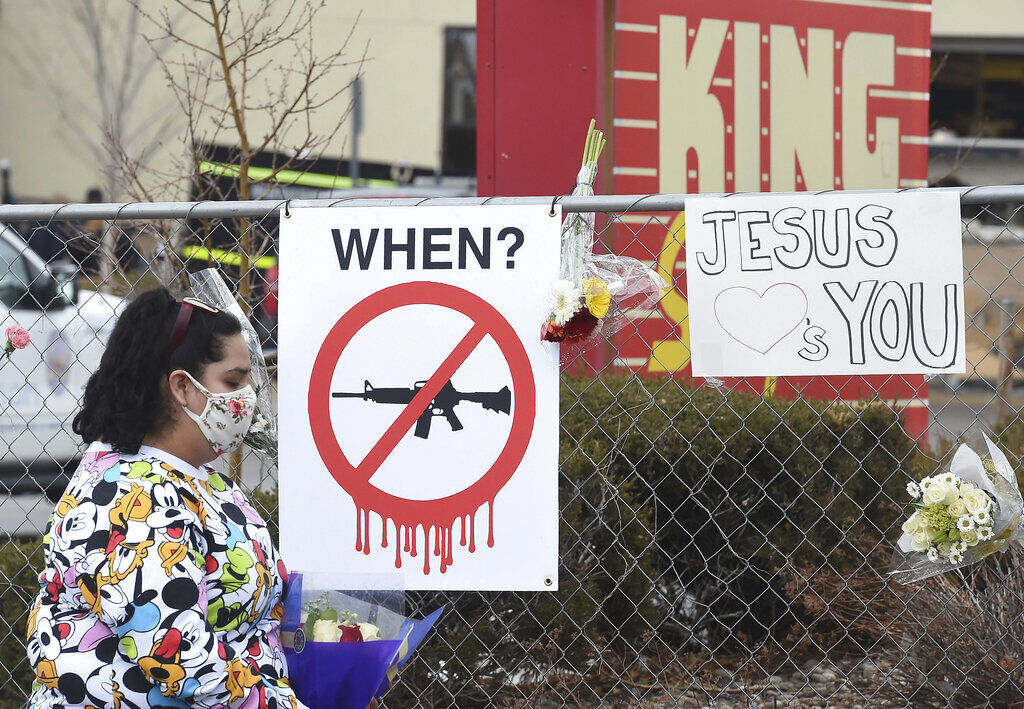 Tanice Cisneros walks by an anti-gun sign on the way to leave flowers for her friend, Rikki Olds on Tuesday, March 23, 2021. Olds was a King Soopers employee that was killed at the Boulder King Soopers on Monday.

An all-star team of Colorado Democrats said there has to be action to answer for the death and shock in Boulder, including either a state or federal assault weapons ban and stronger background checks.

Fenberg said Democrats would pursue the "most aggressive action possible within our power to make sure a tragedy like this never happens again."

He said he hasn't seen a specific bill yet.

The online town hall was supposed to address transportation and other local issues, but it was derailed by tragedy Monday afternoon, when 10 people were killed at a Boulder King Soopers store.

Colorado has a history of taking legislative steps after mass shootings: After Columbine in 1999, the state passed Safe2Tell to give kids a place to share tips. After the Aurora theater shooting in 2012, Colorado strengthened background checks, limited ammunition magazines to 15 rounds and launched a statewide mental health crisis hotline.

"Things are changing," said Boulder Rep. Edie Hooton about gun legislation. "We are seeing movement. I think now is the time to act."

Rep. Patrick Neville, a Republican from Castle Rock, is a survivor of the Columbine High School shootings. He was not on the Wednesday evening town hall.

"It’s incredibly sad to see them use such a horrific tragedy to push their far-left agenda," he told Colorado Politics about a half hour before the event. "Colorado already has some of the most restrictive gun laws in the nation, yet they want to use this to push for solutions that won’t stop or help the situation.

"We need to look at real solutions, like ending gun-free zones and letting citizens protect themselves from those that want to inflict harm."

"We have a leader in the executive branch of the federal government who supports the goals that we all have and share with our delegation, so that is great," the mayor said.

U.S. Rep. Joe Neguse of Lafayette and Sens. Michael Bennet and John Hickenlooper, both of Denver, were on the press call Wednesday evening.

"There are few words to express how our community is feeling right now," Neguse said.

He added, "There is nothing that can be said tonight that can remove the pain or heal those wounds. We are with you."

"I intend to push for every single one of those solutions and others in the days, weeks and months ahead," said Neguse, a rising star among House Democrats.

INSIGHTS | Senseless violence leaves a hole no justice can fill

INSIGHTS | Colorado teeters at the edge of reason

INSIGHTS | A GOP family feud over a red-flag bill

INSIGHTS | Is Lauren Boebert a danger to Democrats … or Republicans?

Hickenlooper, the former governor and Denver mayor, has seen Colorado through many tragedies, including the Aurora theater shooting in 2012.

"Words lose meaning; they have the substance of tissue paper," said Hickenlooper Wednesday night. He called the tragedy and pain a "hold that never fills."

He listed off the shootings, "beyond what any state should endure, and yet no one can look at what happens here again and say that nothing is wrong and that Washington doesn't need to act."

Hickenlooper said politicians can't continue to retreat to partisan corners to keep dangerous weapons from falling into the wrong hands.

"Common-sense steps will save lives, and they have broad support from Coloradans and Americans," he said.

Bennet hinted at Democratic plans to use Senate rules to get rid of the filibuster, a tool of the minority to stop a vote favored by the majority.

Surrounded by SWAT officers and wounded in the thigh, a 21-year-old from Arvada, Ahmad Al Aliwi Alissa, gave up inside the store and was escorted out. He faces life in prison. The Colorado General Assembly ended the death penalty last year. Gov. Jared Polis signed the law a year ago Tuesday, and it took effect July 1.

Guns are a regular battleground at the Colorado Capitol, on any issue large or small that touches firearms, accessories or the Second Amendment.

A week ago, March 17, Democrats killed four gun bills backed by GOP members: a repeal of 15-round limit on ammunition background checks, a limit on the governor's emergency powers over guns, and two measures for concealed carry license holds, relieving them of other background checks and allowing them to carry their weapons on school grounds.

On March 8, the House debated for more than 10 hours on House Bill 1106, which requires safe gun storage with a trigger lock, gun safe or other device. The bill passed out of the House on a party-line vote and is awaiting its first committee hearing in the Senate.

In 2019, the legislature passed a "red flag" gun law to temporarily take weapons from those considered a danger to themselves or others. Though Alissa's family said they were concerned about the weapon he bought on March 6, they did not report his behavior to authorities.

Government money has never been easier to come by. Peanut butter, meet jelly.

U.S. Sen. Michael Bennet fought back tears on the Senate floor Wednesday as he memorialized the 10 victims of the mass shooting at a grocery store in Boulder and called on his colleagues to act.