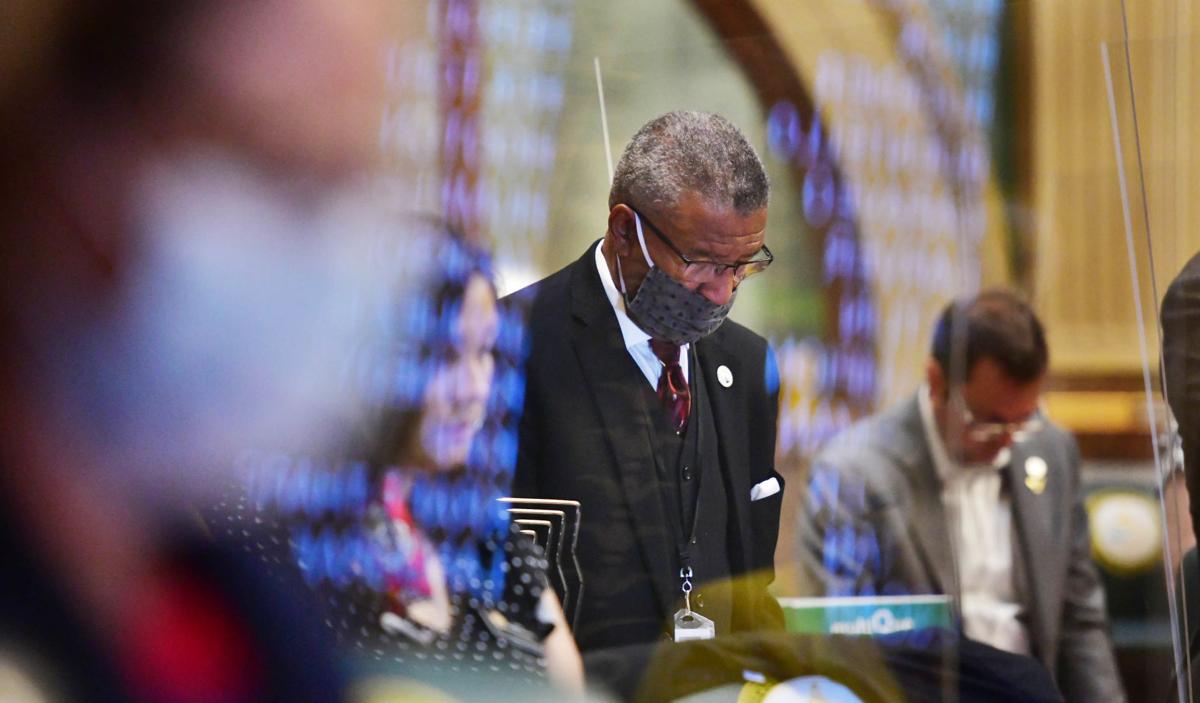 On the last day of legislation, a mask-clad Rep. Tony Exum Sr.(D-Colorado Springs) and other representatives bow their heads for the opening prayer on Monday, June 15, 2020. The names on the vote tally board are reflected in the plastic partitions between each desk. Because of a long recess attributed to the COVID-19 pandemic, this is the latest day in the year for a regular session. 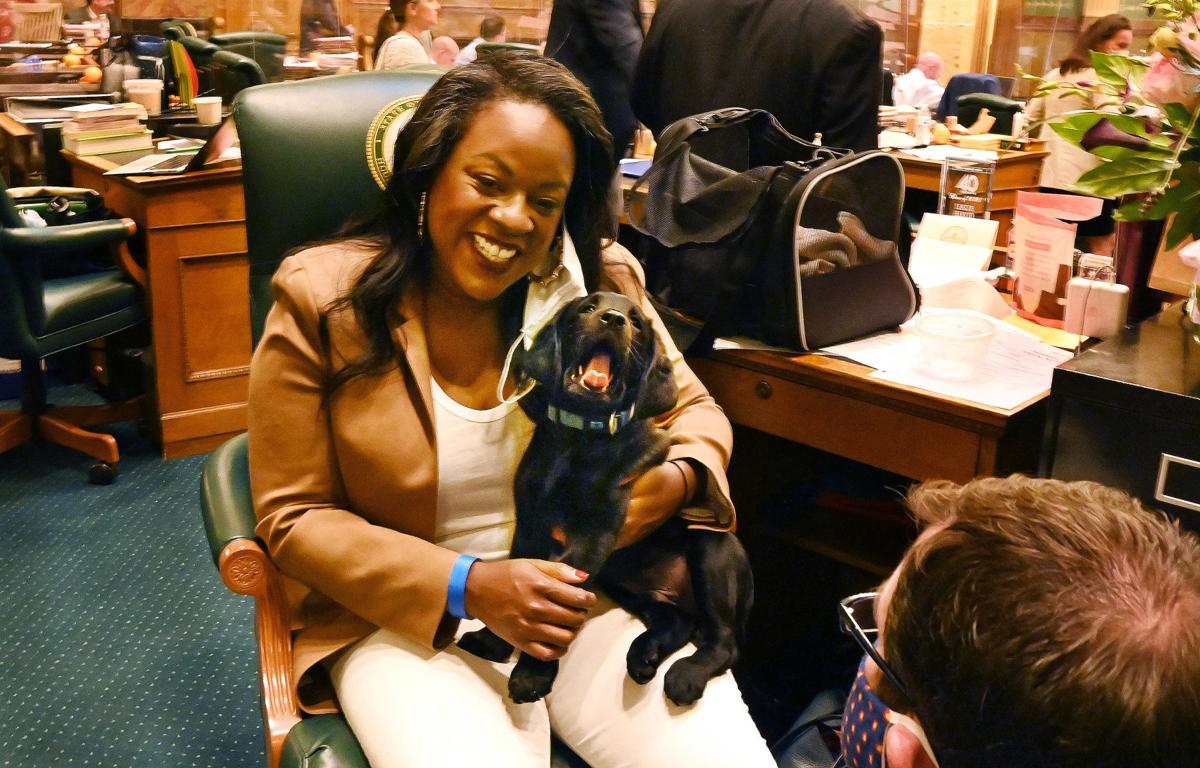 Rep. Leslie Herod, D-Denver, brought her new puppy, Clinton, to the final day of legislature at the Colorado State Capitol on Monday, June 15, 2020. Herod was a co-sponsor of the historic police reform bill that passed almost unanimously in the house. 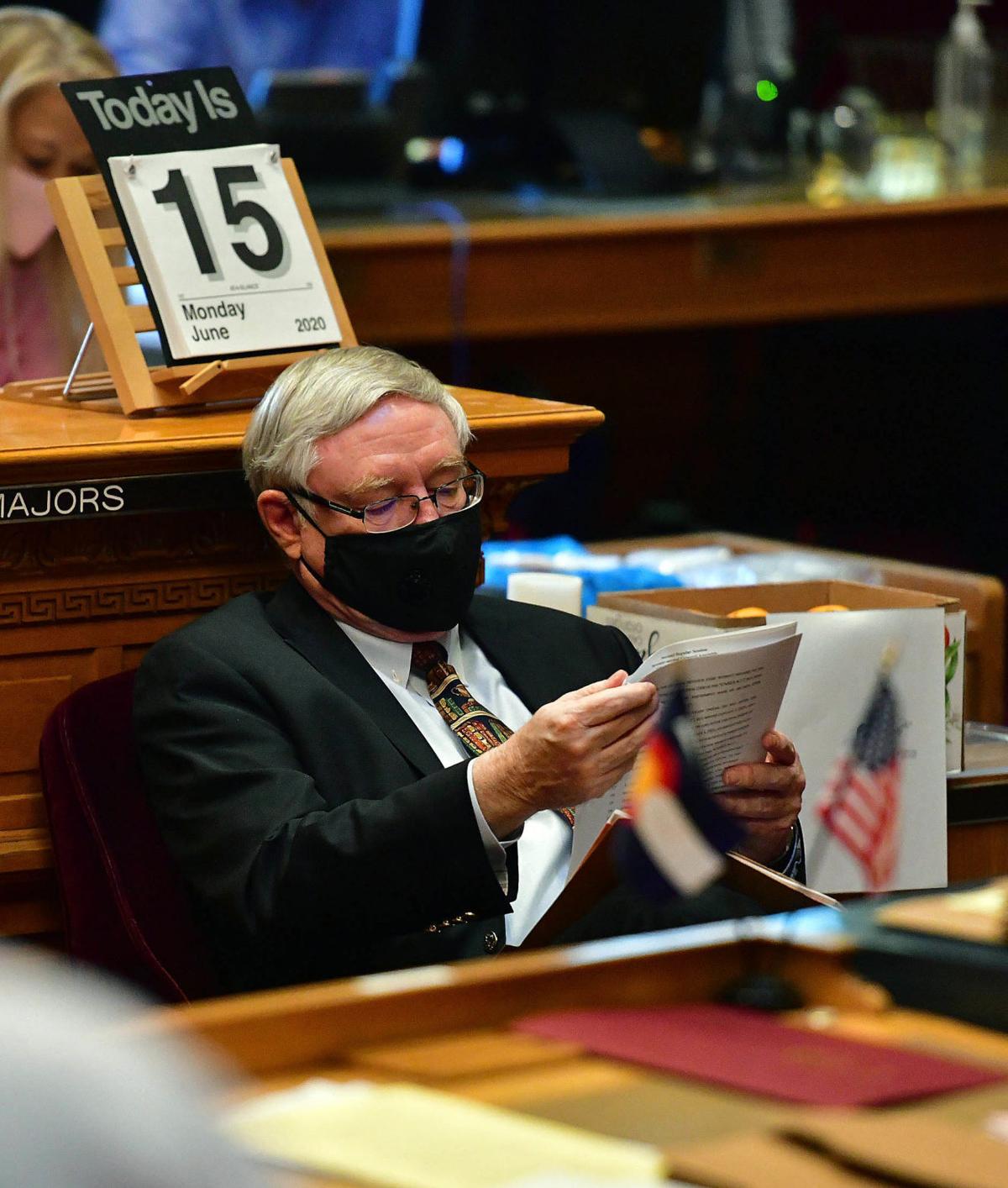 On the last day of legislation, a mask-clad Sen. Bob Gardner, R-Colorado Springs, looks over some paperwork while waiting to speak. Because of a long recess attributed to the COVID-19 pandemic, this is the latest day in the year for a regular session. The session was supposed to end on Saturday, but carried over to late in the day on Monday, June 15, 2020. 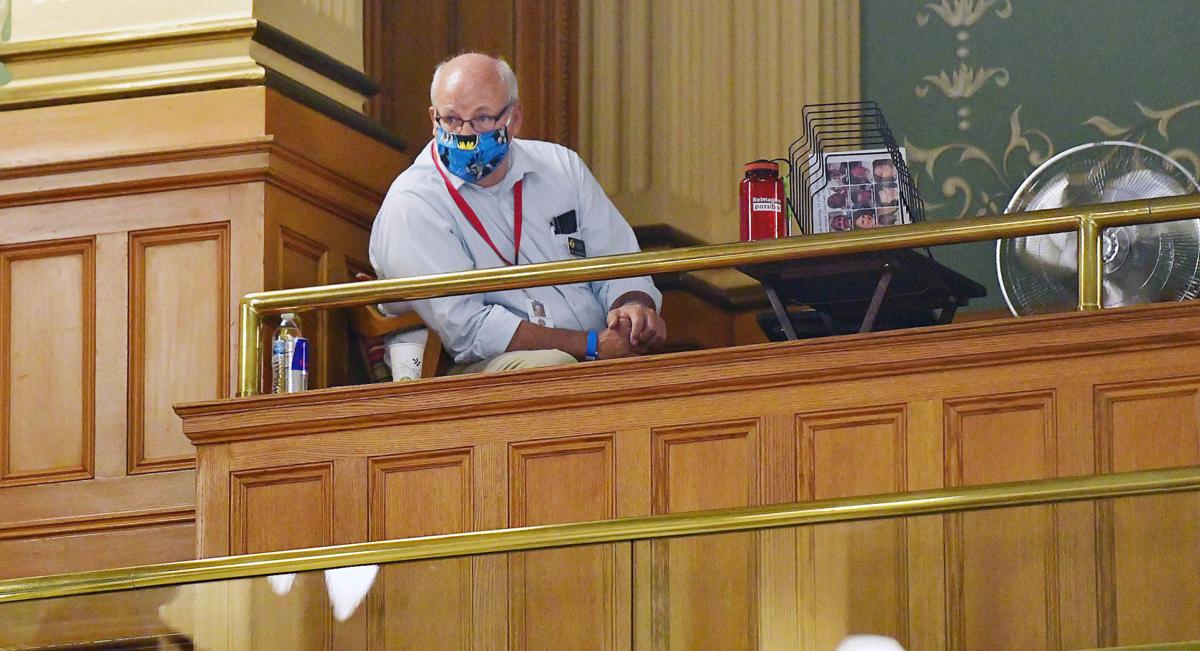 To be able to follow social distancing, some of the members of the Colorado House of Representatives had to move their seats from their desk to the balcony. Rep. Tom Sullivan, D-Centennial, votes from the balcony on the last day of legislation on Monday, June 15, 2020. Sullivan became a representative after his son was murdered in the Aurora theater shooting.

The normal 120-day session of the Colorado General Assembly called it quits Monday after 84 days, though it was 160 days in the making.

The legislature worked on Saturday (and the Sunday before that) to gavel out on Monday, so some could hit the campaign trail (and raise money from lobbyists, which they can't do in session) before the June 30 primary. All 65 members of the House and about half the 35-member Senate are up for reelection this year.

Most of Monday was left to unfinished business, repassing bills that were amended in the other chamber and passing resolutions — including honoring fallen officer Heath Gumm, the Adams County deputy shot and killed during a chase in 2018; declaring June Gay Pride Monday and memorializing last March as Women's History Month in the state.

Other happenings on the last day:

The lower chamber on Monday concurred with the upper chamber's amendments to House Bill 1420, legislation to remove tax breaks from businesses and the wealthy to backfill money for education.

"At the outset we said this bill is a choice between the wealthy and well-connected and supporting our children and our teachers and our schools," said Rep. Emily Sirota, a Democrat from Denver who sponsored the proposal. "I think the House should be very proud of the work we did and the choice we made."

She said the work on tax fairness, "which we lack in this state," will continue.

Senate Democrats issued a statement Monday saying the bill "removes Trump tax loopholes that benefit those with an adjusted gross income of more than $500,000."

Gov. Jared Polis, a Democrat and schools advocate, has been skeptical of the proposal, however, and the Senate sponsors watered the bill down Saturday night to avoid a threatened veto.

Though Democrats cast it as removing loopholes, businesses called it a tax hike, occurring outside the requirements of the state constitution's Taxpayer's Bill of Rights.

"It's still a tax, it really is," said Rep. Richard Champion, a Republican from Littleton,

The business community has been up in arms, noting the bill was introduced and passed quickly without adequate input from those most affected by the change, businesses.

Sen. Chris Hansen, a Denver Democrat, pleaded with lawmakers during the final vote Monday to not put forward a "false narrative" that the bill was rushed (it was introduced a week ago), or that stakeholders were not listened to. Sponsors made "a good faith" effort to work with everyone, he claimed.

Fair Tax bill doesn't have signoff from governor yet

Senate Bill 213 passed Monday to extend Polis' coronavirus executive order that allows restaurants to sell alcohol with food to drink off-premises until July 1, 2021. The Senate concurred with House amendments, sending the measure to the governor.

With Polis' blessing, those with a liquor license will be allowed to sell an alcohol beverage in a sealed container and deliver the alcohol to customers, as long as the person who makes the delivery is at least 21 years old, or provide alcohol with takeout orders.

When the coronavirus emergency is over, alcohol sales can be no more than 50% of an eatery's food and beverage sales, with limits on the amount of alcohol that can been purchased in individual orders.

“This bill provides critical relief for an industry that has been uniquely hard-hit by COVID-19 -- for some it will literally be the difference between surviving and closing," Sonia Riggs, president and CEO of the Colorado Restaurant Association, said in a statement Monday. "This is a big win for Colorado restaurants and for diners who want more options as we navigate reopening.”

House Bill 1427 asks voters in November to tax vaping products and ratchet up taxes on cigarettes to put more than $400 million annually into schools, health care programs and housing assistance over the next 2 1/2 years.

The House on Monday approved Senate amendments and repassed House Bill 1415 on a 29-24 vote, providing whistleblower protections to those who see something and say something in public health emergencies.

The Senate passed the bill, introduced on Saturday, June 4, by a party-line 20-15 vote.

The proposal allows workers to file a complaint with the state Department of Labor before suing in district court.

Reinsurance to continue for five more years instead of one

While Sen. Dominick Moreno, a Commerce City Democrat, insisted that the bill's major opponents — the health insurers — are now neutral, Sen. Paul Lundeen, a Monument Republican, said "capitulation is not the same" as being neutral.

The Senate rejected House amendments on Senate Bill 205, the paid leave bill, sending it to a conference committee during the noon hour. The conference committee came back with a fairly substantial change: it dropped the exemption for businesses of 15 employees or less. That earned it the vote of Rep. Matt Gray, a Broomfield Democrat, who had voted against the bill last week because it did not cover 100% of the workforce.

Nearly two hours after lawmakers had trooped down to the governor's office to notify him the General Assembly was done, the House adjourned.

"Sometimes we make history, and sometimes history makes us," Majority Leader Alec Garnett said in making the motion. "We rose to the occasion in this body; 2020 was a very challenging session."