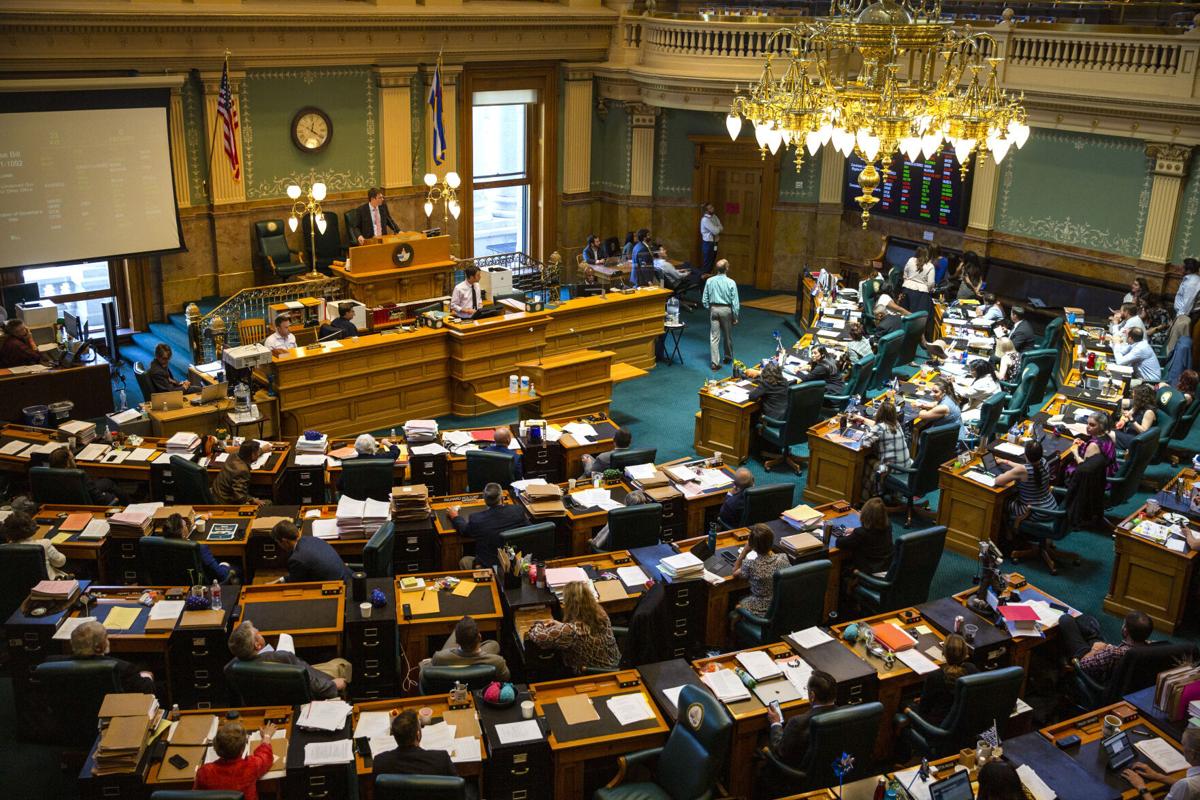 Scenes from the final day of the legislative session at the Colorado Capitol in Denver on Tuesday, June 8, 2021. 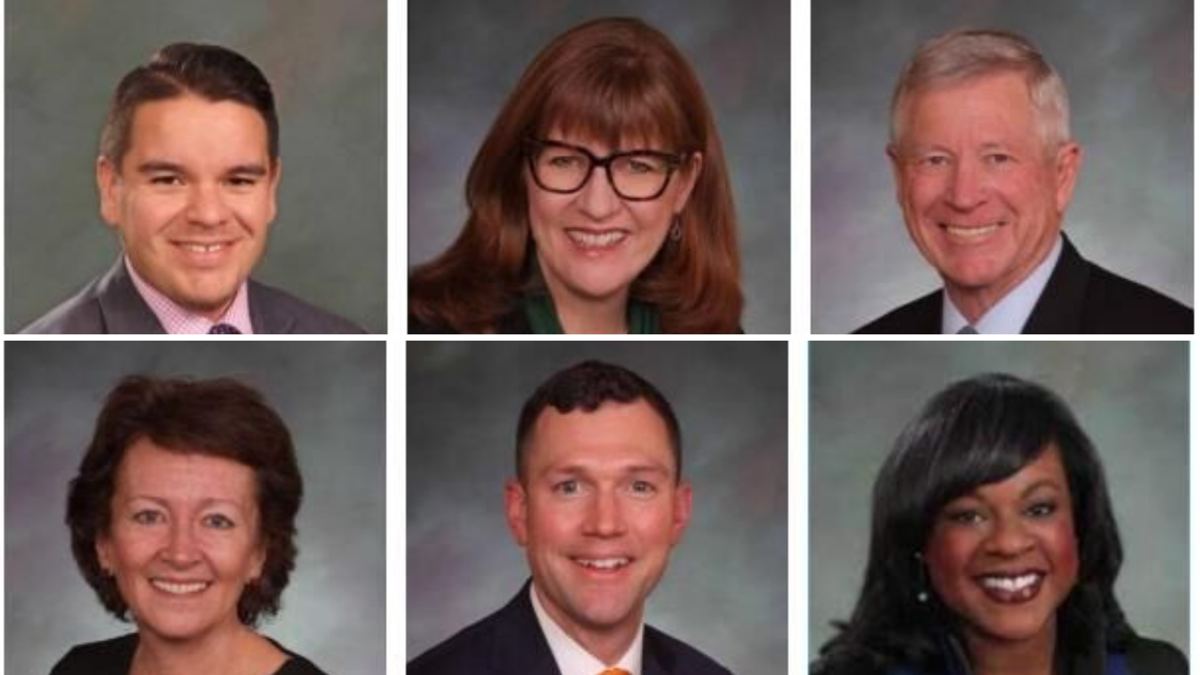 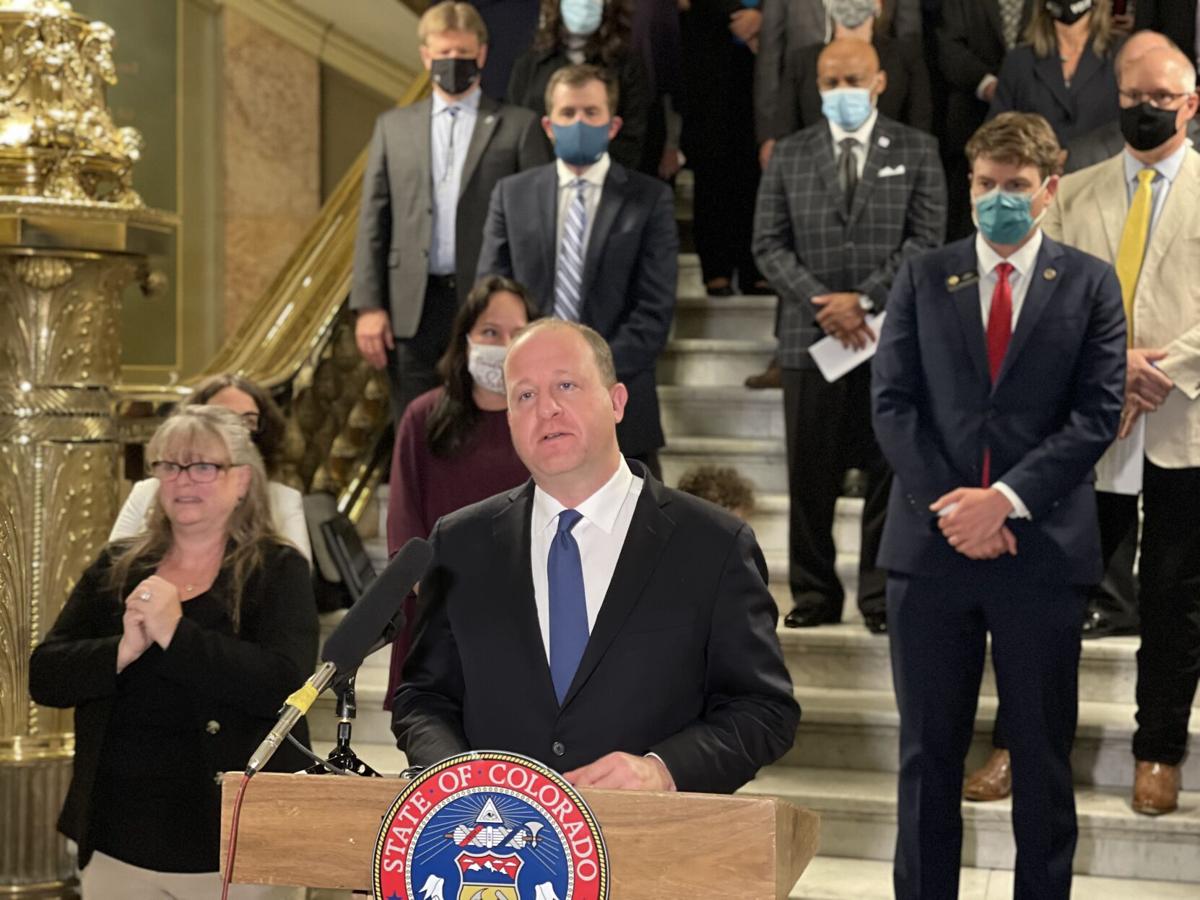 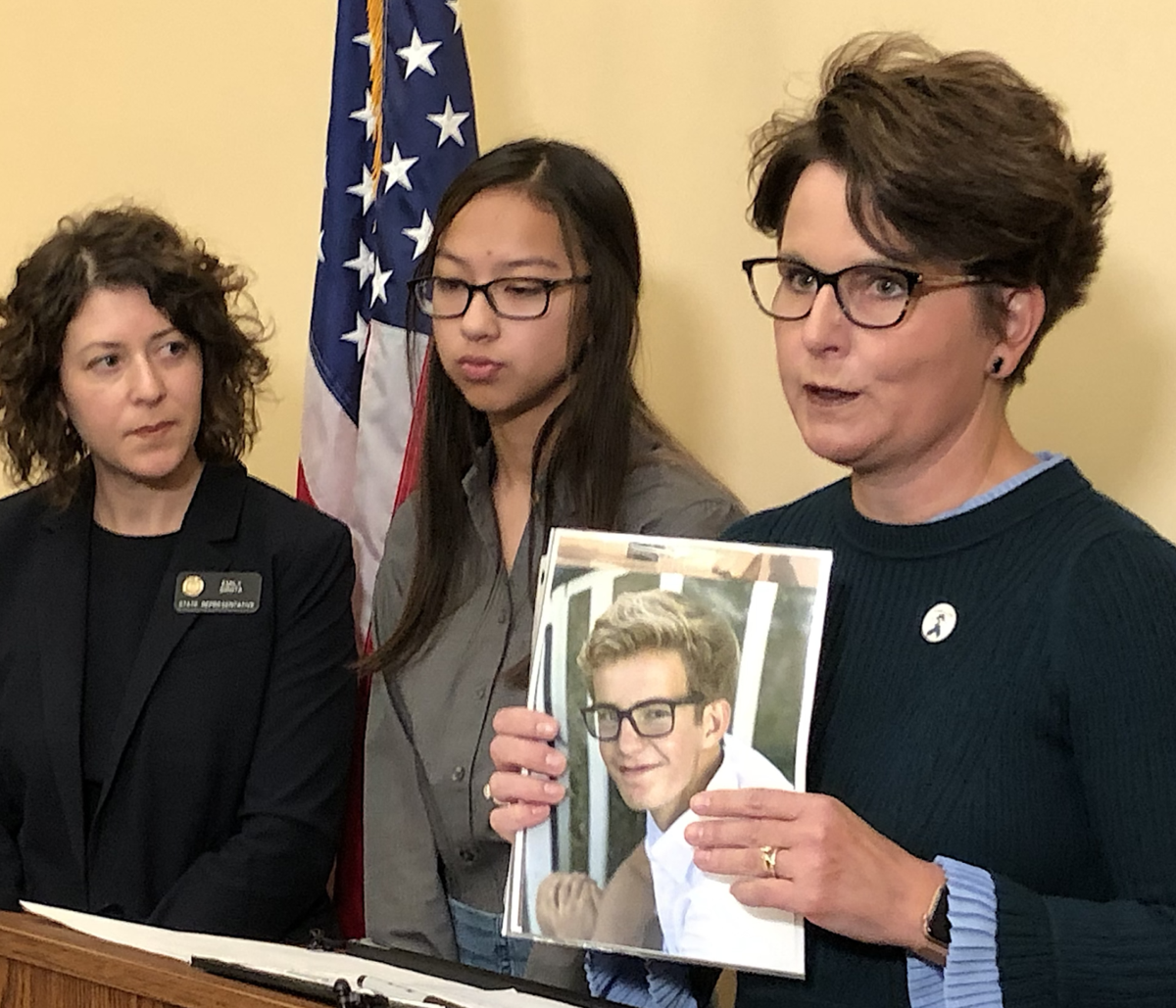 Kari Eckert of Golden holds a picture of her son, Robbie, who died from suicide, before a hearing on Thursday, Feb. 6, 2020, on two bills aimed at improving mental health for students on campus. At her right is Lakewood student Hanna Newman and state Rep. Emily Sirota, D-Denver. 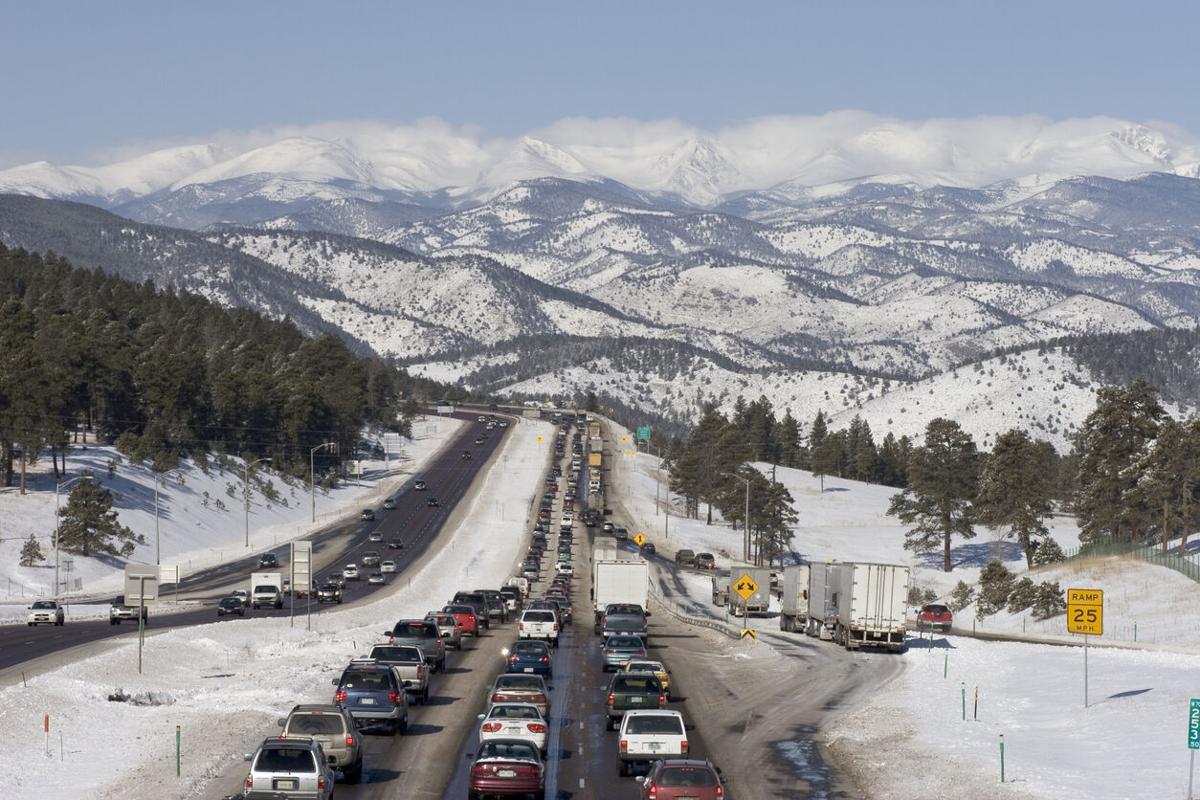 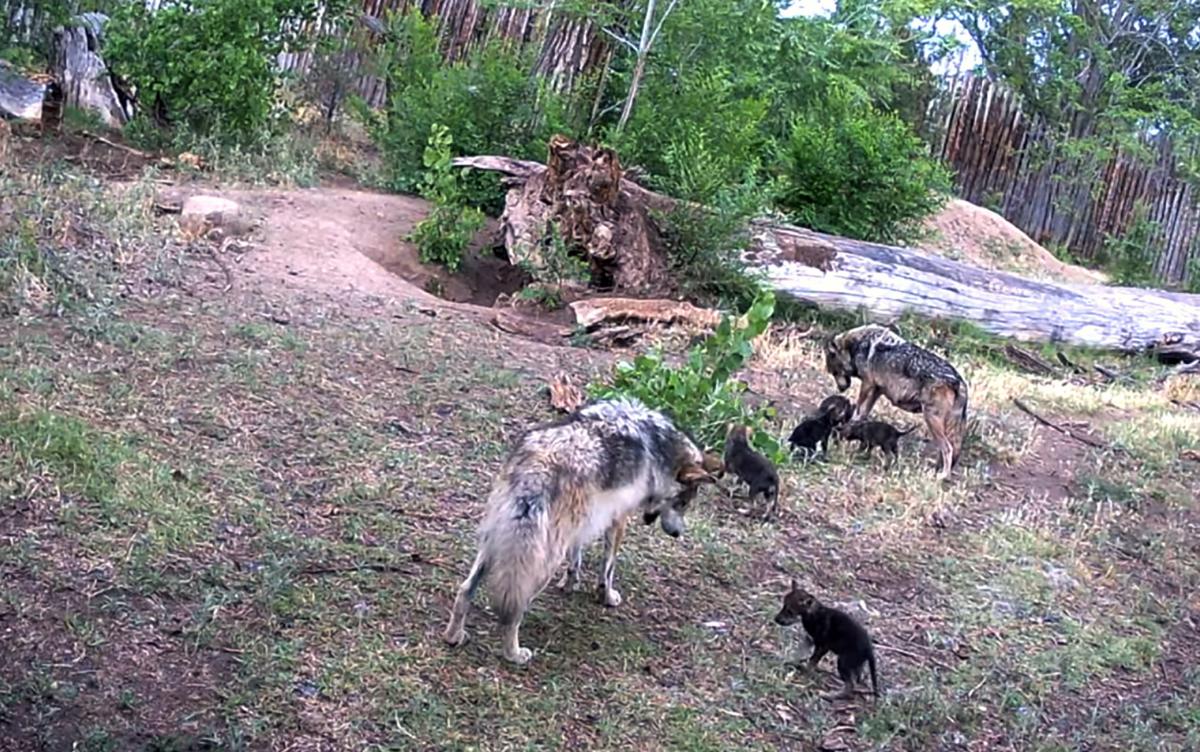 This June 3, 2020, image taken from a Web camera provided by ABQ BioPark shows Mexican gray wolf parents play with their second litter of seven pups born in May, who recently came out of their underground den for the first time to explore their environment at the ABQ BioPark in Albuquerque, New Mexico. 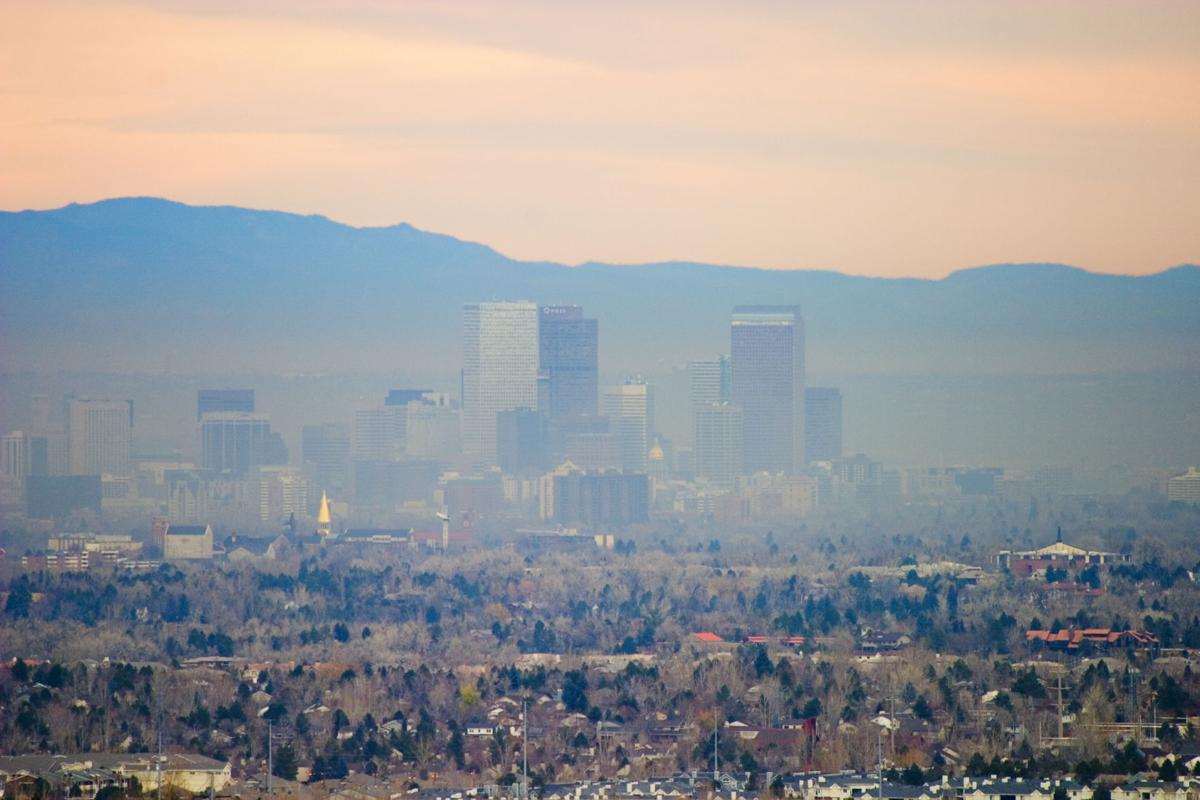 Air pollution over Denver in an undated photo. 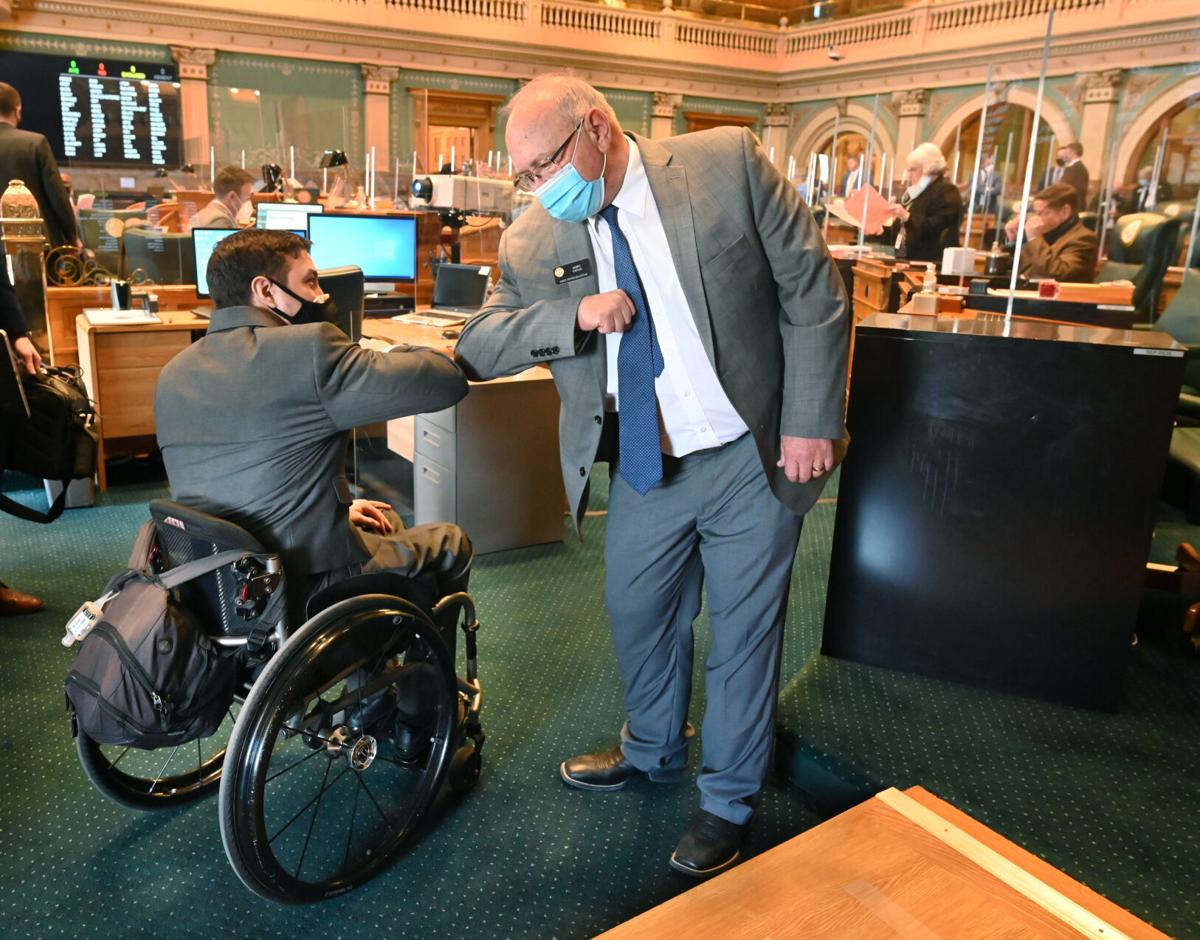 Representatives David Ortiz, D-Centennial, and Marc Catlin, R-Montrose, elbow bump during a recess of a session of the Colorado State House of Representatives on Tuesday, Feb. 16, 2021. Ortiz is the first person in a wheelchair to serve as a state lawmaker and is a veteran. (Photo by Jerilee Bennett, The Gazette) 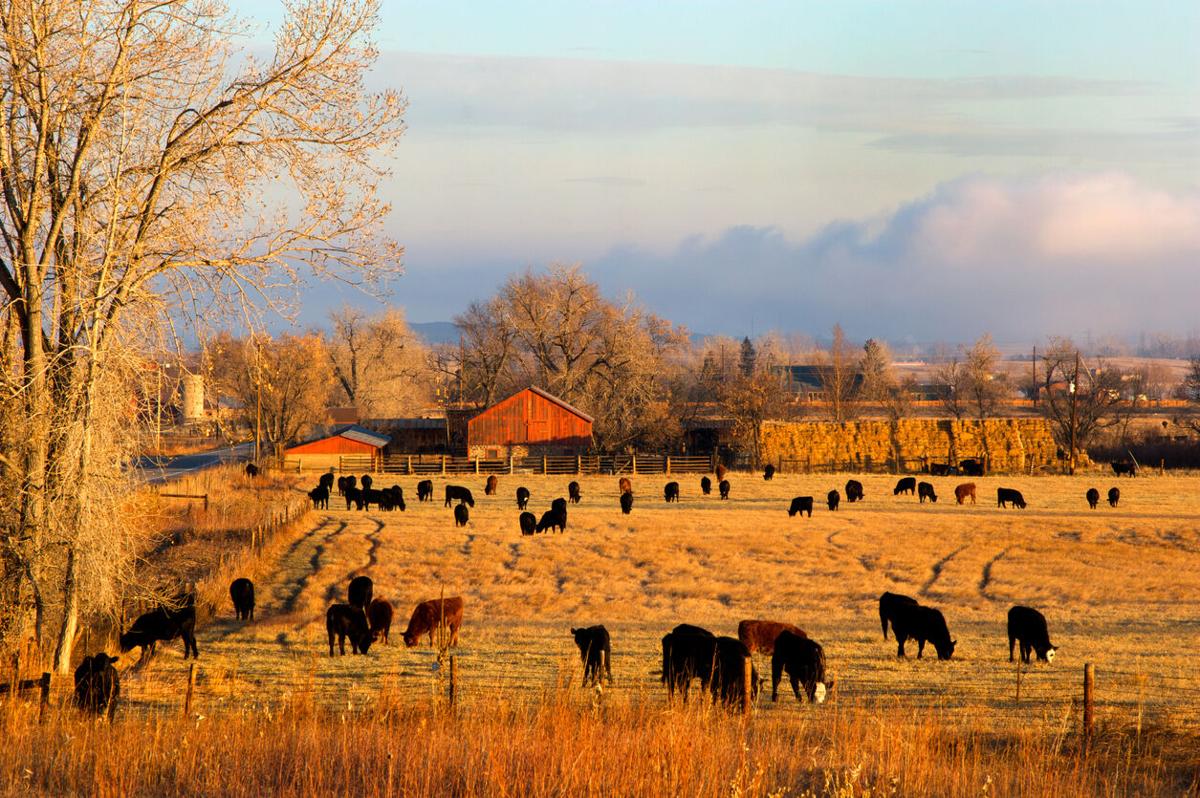 Scenes from the final day of the legislative session at the Colorado Capitol in Denver on Tuesday, June 8, 2021.

Air pollution over Denver in an undated photo.

Representatives David Ortiz, D-Centennial, and Marc Catlin, R-Montrose, elbow bump during a recess of a session of the Colorado State House of Representatives on Tuesday, Feb. 16, 2021. Ortiz is the first person in a wheelchair to serve as a state lawmaker and is a veteran. (Photo by Jerilee Bennett, The Gazette)

Colorado Politics writers and editors took stock off the 116-day legislative session to cast a value on the losses and gains of legislators, issues, partisan viewpoints and more.

Here's who or what trended up or trended down since the General Assembly assembled in January.

The bicameral panel that writes the first draft of the state budget had no easy feat this session, restoring cuts from last year, leading the charge on how to spend $3.9 billion in federal stimulus dollars and figuring out a new system for prioritizing late-session spending, courtesy of fast-rising Sen. Chris Hansen, D-Denver.

A raft of bills took on this long-neglected need in Colorado: serving those who struggle, who take a toll on the state in lost productivity, violence and their own well-being. Besides the $114 million Behavioral Health Recovery Act that addresses addiction services and crisis intervention, the legislature created the Colorado Behavioral Health Administration to oversee programs and spending.

You might not agree with the boss, but he's still the boss. Some Democrats thought they could put a thumb in the legislative eye of former House Speaker KC Becker, author of the state's Climate Action Plan, by calling it toothless and giving more power to an appointed board. The governor suggested they were overreaching and he might veto the legislation. The Polis agenda scored big wins on transportation, health care savings and the environment this session.

Despite the poorly taken shot at climate change enforcement, the environmental movement eked into the winner's circle this session on the back of banning plastics, a long sought item on Colorado's green wish list. Four different bills are aimed at making new buildings more energy efficient, and the green machine notched a huge win with the heavy lean toward transit and electric vehicles in a $5.4 billion transportation package.

Blessed are the aisle crossers. A lot of lawmakers talk about it, but few pull it off. Meet the Republican representative from Montrose and the House speaker from Denver, respectively.

Transportation got a lift, and so did the push against climate change, but at what cost? The $5.4 billion package is supported by the existing state budget along with a list of new fees on gasoline, electric vehicles, ride sharing and deliveries. How that money gets spent will be a fight that unfolds over the next few years.

Even before he was seated as a legislator, Ron Hanks was making waves, which continued in dustups throughout the session. But, ultimately, who pays the price when a lawmaker tilts at windmills and shakes his metaphorical fist at the system? It's not his district's issues, services and those who disagree with him.

The issue got pulled into the whirlpool of raw feelings between the law enforcement community and certain Democratic lawmakers who see themselves as reformers. Sponsors pulled a bill that would have prevented students for being arrested as a form of school discipline, but another bill that did pass requires school districts to come up with anti-bullying plans that include suspension.

Sure House Bill 1232 passed, but it wasn't nearly what it was not the political or even health care game changer it was built up to be. Instead of a below-market insurance policy, it turned into a threat of one if the industry can't cut prices by 15% over three years, plus other sticks in lieu of carrots.

Anyone who thinks that Democrats have any interest in stakeholding with anyone who opposes their bills (see: farmworkers, Indian mascots, public option, PDAB, online voting for the blind), don't kid yourself. The front-runner for ignoring the people who her bills would affect: Sen. Jessie Danielson, D-Wheat Ridge, who ignored the ag industry with her farmworker bill of rights and the schools with Indian mascots (and the state's tribal leaders) with her bill to ban mascots and nicknames.

Now that he's Polis' Department of Revenue executive director, he has a bitter product to peddle: At least seven new license plates were authorized in this session, likely a record.

The successful ballot measure to reintroduce gray wolves in Colorado (despite the fact they're already here) led to a quartet of bills from Western Slope lawmakers, attempting to put limitations on the program that will be set up by the state's Parks and Wildlife Commission. The only one that succeeded was to exclude dollars that go to parks and wildlife and which come in from license fees for hunting and fishing. The other three attempted to set up the process for CPW on how to bring in wolves, figure out the financing, and set boundaries on where the wolves could be introduced.