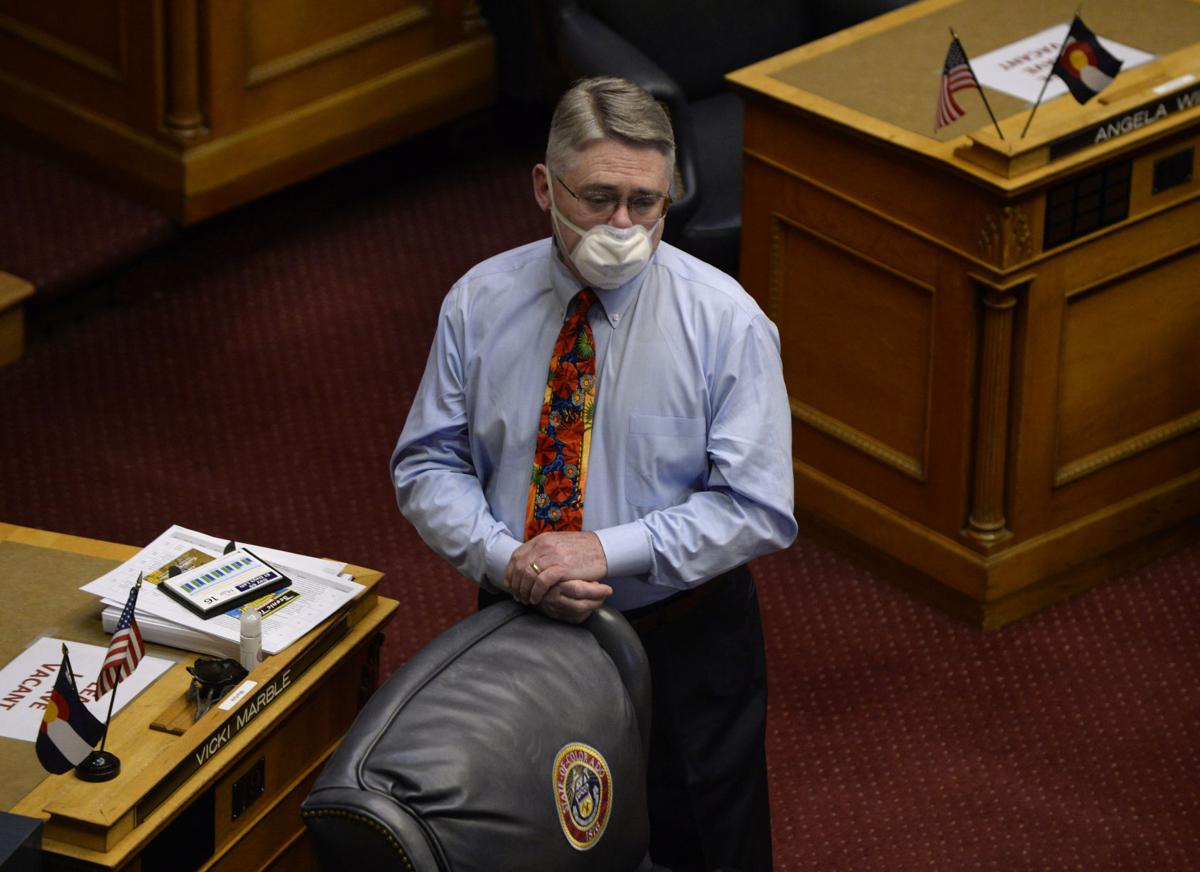 Senate Minority Leader Chris Holbert waits by his chair on the senate floor for the returning session to begin. Colorado lawmakers return to the state Capitol on May 26, 2020 in Denver, Colorado. Legislators have returned after a 10-week pause due to fears from the spread of the coronavirus. 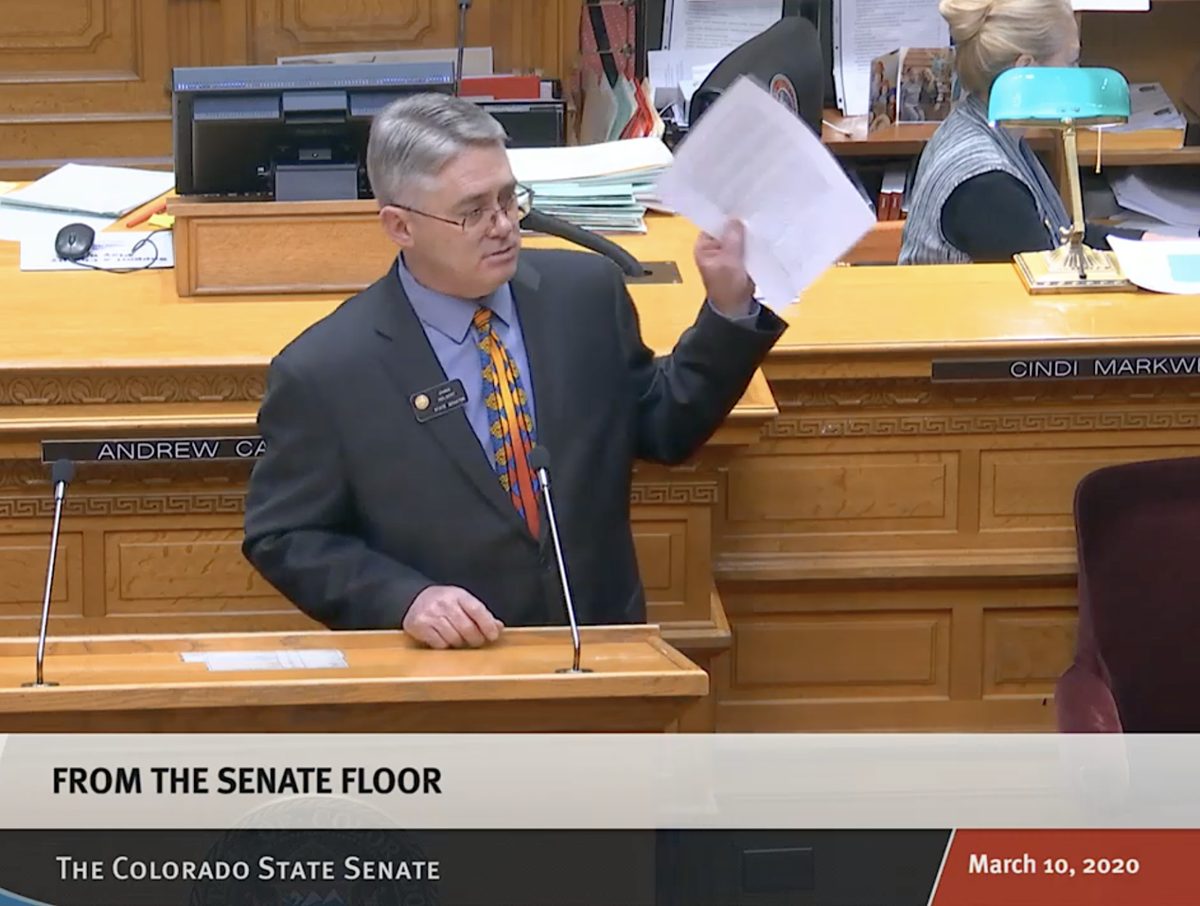 Senate Republican leader Chris Holbert talks about contingency plans for the legislature on the day Gov. Jared Polis announced a state emergency due to the coronavirus outbreak, March 10, 2020.

Senate Minority Leader Chris Holbert waits by his chair on the senate floor for the returning session to begin. Colorado lawmakers return to the state Capitol on May 26, 2020 in Denver, Colorado. Legislators have returned after a 10-week pause due to fears from the spread of the coronavirus.

Senate Republican leader Chris Holbert talks about contingency plans for the legislature on the day Gov. Jared Polis announced a state emergency due to the coronavirus outbreak, March 10, 2020.

Senate Republican leader Chris Holbert is hopeful that crisis breeds opportunities, because the one thing Colorado has plenty of right now is critical problems in public health and public dollars.

There’s just not that much his caucus can do about it, until Colorado’s political winds blow in some change. Republicans lost the state Senate in 2018 and lost another seat in November to fall to a 20-15 deficit against a Democratic majority that has the backing of a Democratic House and governor.

If Democrats stick together, they could outlaw ice cream.

Holbert said all Republicans want is a voice in the big decisions, and chance to have some say in how bills are written and how money is spent, long before the ink dries.

"In the Senate, if we talk to each other, we can work together," Holbert said, citing the major criminal justice bill the General Assembly passed in June, Senate Bill 217.

"My goodness, in less than a week that thing went from terrible to workable," he continued.

Rather than fight over absolutes and extremes, lawmakers had a genuine give and take, which Holbert called brilliant. He named Democratic Sen. Rhonda Fields of Aurora and Senate President Leroy Garcia of Pueblo who had earnest talks with Republican Sens. John Cooke, the former Weld County sheriff, and Bob Gardner, a self-described "simple country lawyer" from Colorado Springs.

Holbert expressed pity, however, for Majority Leader Steve Fenberg, the Democratic senator from Boulder who will be charged with maintaining order and the upper chamber's calendar, under the increasingly dark clouds of economic and public health crises.

Managing the calendar and expectations will be vital to a smooth session, Holbert said.

It’s been Republicans, however, slowing things down the last two sessions, requiring bills to be read word for word and prolonging debates over touchy issues such as vaccinations, when Democrats clearly had the votes.

The GOP caucus was feeling steamrolled by the majority.  A point about slowing down was being made by Republicans with the only tools they had. Holbert hopes the point sticks, for the benefit of all involved.

"Not to poke them in the eye, but I think the majority understands now that when things get tense, the thing you might want to do is just go to your corner and not talk to each other, but they've got to reach out and say, 'Get over here and talk to us.'"

One of the discussions this session will be about transportation, Holbert said.

In the past, it's been Republicans pushing hardest to put more money from the state operating budget into roads and bridges, which relies almost entirely on a withering gas tax.

When the GOP hears "new revenue" now, though, what they really hear is a tax hike.

Now some Republican members are asking questions about how the money gets spent on contracts and engineering.

“Is there waste? Is there mismanagement?” Holbert asked. “That’s going to be an important conversation.”

If that turns out to be true, the search for money changes, because there's certainly no new revenue available in the state budget.

In 2019, Holbert and Fenberg brokered a bipartisan to carve out $300 million into the highway department out of the state budget.

That leaves borrowing the money, which Democrats historically have opposed as a future lien on money for education and public services, “Or that T word,” Holbert said, meaning taxes.

If Democrats try to attach a new fee to raise money for transportation, Holbert said they should call the levy what it is: a tax.

New taxes, however, have to go to the statewide ballot, because of the Taxpayer’s Bill of Rights, where they nearly never pass. The legislature can approve fees.

By the time term limits kick him out of the General Assembly after the 2022 election, Holbert will have served six years in the majority and six in the minority.

Before he ever joined the General Assembly as a House member in 2010, he was a business consultant who lobbied under the gold dome for mortgage lenders.

During his opening day address last January, with no idea of the challenges that lay ahead for the state and nation, he spoke of the privilege of representing others.

“So few people have the opportunity to stand in this well, to debate issues and participate in crafting the laws of our state,” Holbert told fellow lawmakers. “I’m humbled to be counted among you and those who have served before us.”

Joey Bunch: "We educate children to take on the future, agreed? That shouldn't mean they should have to take on four years of crushing college debt for a degree that might not support the loan payments, a new family and a mortgage."

The Capitol Choir is no doubt the best caucus under the gold dome, and Friday's harmony, as it was, reminded a cynical watcher of politics that there's still some good bipartisan fellowship around.

The Colorado General Assembly began its 2019 session Friday. Here is the text of the opening…

Hey, how about a ballot issue to upgrade the state’s woefully bottlenecked, backlogged and aging highway network — without raising taxes? You want it? You got it:...

“If you think you had problems last Wednesday, they might not be over yet.”