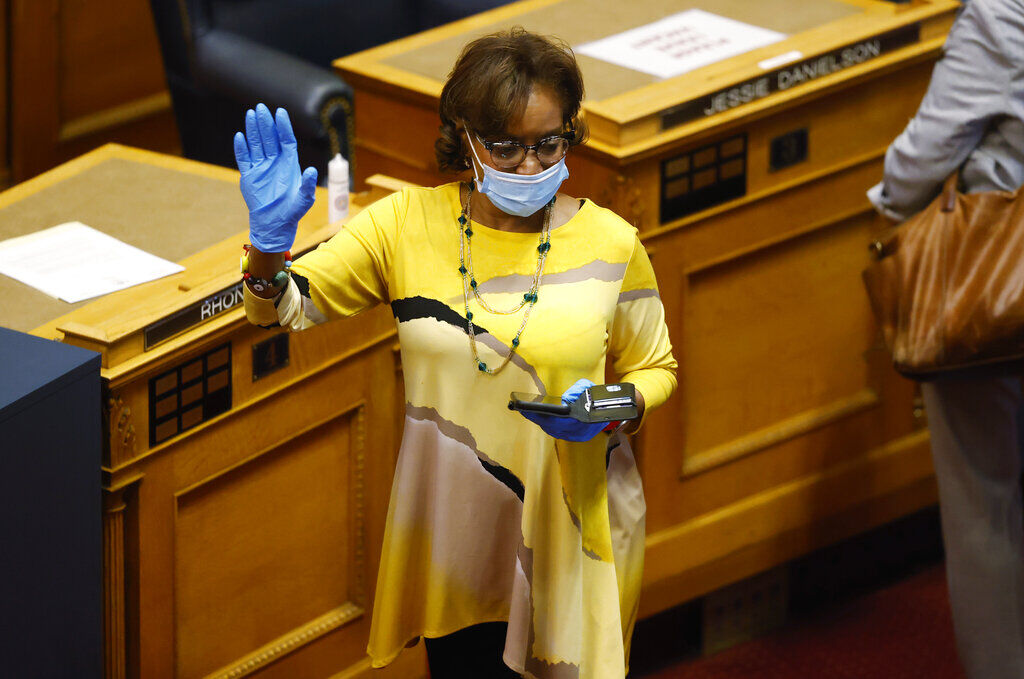 Colorado State Sen. Rhonda Field, D-Aurora, wears a face mask and latex gloves while conducting business on the floor Tuesday, May 26, 2020, in downtown Denver. Lawmakers reconvened the 2020 session, which was suspended to deal with the new coronavirus in March, facing the prospect of making deep cuts in the budget. 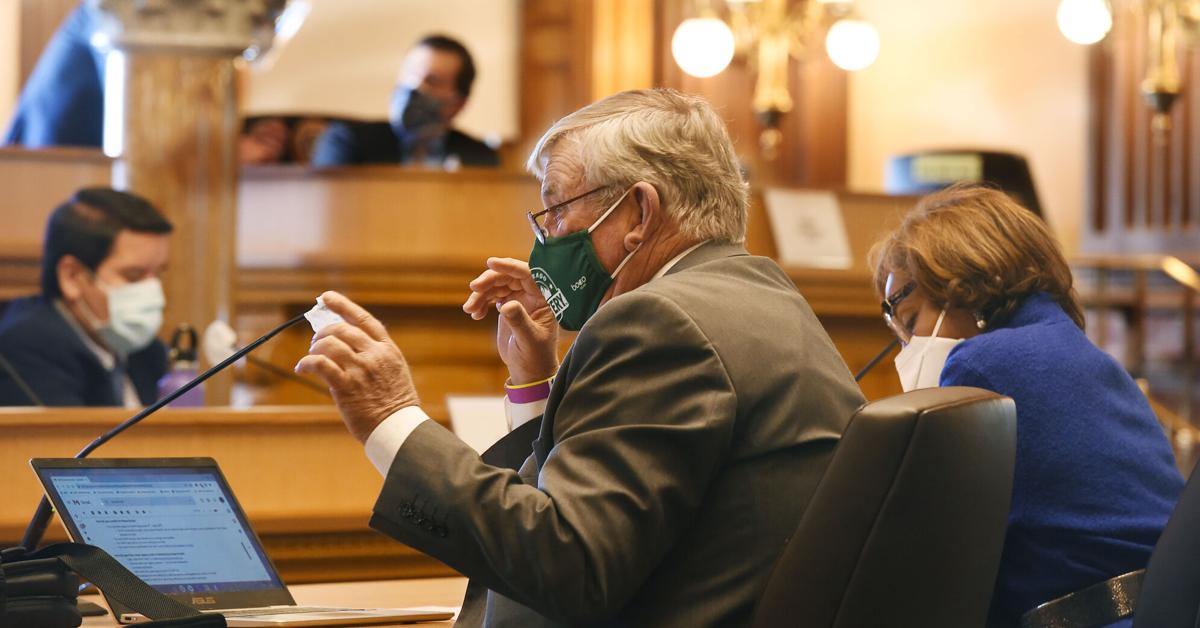 State Sen. Larry Crowder, Republican, and State Sen. Rhonda Fields (left to right) spoke during a senate finance committee meeting on Monday, Nov. 30, 2020. Colorado lawmakers returned to the Capitol on Monday for a special session to work on bills tied to COVID-19.

Colorado State Sen. Rhonda Field, D-Aurora, wears a face mask and latex gloves while conducting business on the floor Tuesday, May 26, 2020, in downtown Denver. Lawmakers reconvened the 2020 session, which was suspended to deal with the new coronavirus in March, facing the prospect of making deep cuts in the budget.

State Sen. Larry Crowder, Republican, and State Sen. Rhonda Fields (left to right) spoke during a senate finance committee meeting on Monday, Nov. 30, 2020. Colorado lawmakers returned to the Capitol on Monday for a special session to work on bills tied to COVID-19.

Weeks out from the start of the legislative session, state lawmakers’ plans to confront the effects of the COVID-19 pandemic largely amount to general goals, reinforcement of executive actions and an anxious hope that Congress will refrain from washing its hands of further financial relief.

Multiple legislators voiced to Colorado Politics a common set of problems that deserve intervention: students who suffer from learning loss and disengagement from remote classes, growing mental health concerns and businesses that cannot support themselves any longer.

Sen. Kerry Donovan, D-Vail, plans to work on a proposal for remedial resources that families can access to address the deficiencies of online learning.

“We know that children will end up having gaps in their learning,” she said. “There are things we can do that don’t have tens of millions of dollars in price tags.”

Sen. Chris Hansen, D-Denver, echoed that goal, noting one of his sons adjusted well to schooling during the pandemic but the other has struggled.

“I think there’s some really creative ideas out there around summer programs, supplementary programs that the state can make available,” he said.

Sen.-elect Chris Kolker, D-Centennial, added that he plans to address the staffing issue of what happens to a class when the teacher must quarantine themselves, but the students continue to attend in person.

Regarding mental health, several people were concerned about the increase in calls to mental health hotlines nationally and in Colorado. Calls to the state’s crisis line, 1-844-493-8255, increased more than 50% between January and October. Safe2Tell, the confidential school safety tip line, had welfare checks as the second-most prevalent category of report during the current school year, behind suicide threats.

Larson indicated he would like to scale back laws that reversed federal taxable income relief and expanded the taxable wage base on businesses for state unemployment insurance. The latter was intended to address the insolvency of the trust fund amid drastically increased demand for unemployment benefits.

“I’m hoping we can claw back some of those things that we passed or tweak them to make them more small business friendly, or at least delay their implementation until we have some kind of certainty,” he said.

Other lawmakers intended to extend or make permanent relief measures passed in the last session or enacted through executive order. Larson and Rep. Dylan Roberts, D-Avon, are working to prolong a law they sponsored in the 2020 session to allow takeout or delivery of alcohol for certain establishments. As it stands, the accommodation will expire in July.

Sen. Pete Lee, D-Colorado Springs, mentioned his interest in codifying the authority county sheriffs have to manage their jail population, given that such environments are susceptible to large-scale COVID-19 outbreaks.

Roberts also indicated the need to implement an “affordable health insurance option that’s not tied to employment” — along the lines of the proposed public option plan that never gained traction last session. He pointed to increased unemployment during the pandemic as the motivation for reexamining the idea.

“The issues remain the same but the level of urgency has started to increase, in my opinion,” Roberts said.

Earlier this month, legislators in an extraordinary three-day session passed 10 bills that provided more than $280 million in direct financial support. Including fee and tax relief, the total aid package totaled around $342 million to businesses and other organizations helping Coloradans through the pandemic.

While the governor’s office was involved in the proposals heard at the special session, lawmakers said the 2021 session will likely feature a combination of executive involvement and ideas germinating from individual legislators.

“I think everyone is kind of hearing the same thing from their constituents,” said Sen. Kevin Priola, R-Henderson.

Many leaders, however, are looking to the nation's capital, where the U.S. House of Representatives has passed robust legislation to fund additional needs, but the U.S. Senate has refused to advance it.

“I think there’s a lot of hoping that Washington, D.C., steps up and plays a role in helping out,” said Rep. Kyle Mullica, D-Northglenn, who is also an emergency room nurse.

Rep.-elect Judy Amabile, D-Boulder, listed her priorities that did not necessarily depend on action from Congress. Those include continuing to promote mask mandates and testing, outdoor dining, instituting deferred loan payments and providing direct income supports where possible.

“Absent federal funding for state and local governments, much of next year is going to be spent making Draconian cuts just to balance the budget,” she predicted.

Although national uncertainty is a factor, Rep. Susan Lontine, D-Denver, also offered that the nature of legislating during a pandemic has stymied ideas.

“We are all pretty isolated. We’re not able to get together socially and that’s where a lot of idea exchange happened,” she said. Zoom calls “are not conducive to throwing out ideas and talking them over.”

Ultimately, legislators promised there would be additional pandemic legislation regardless of the federal government’s actions.

“We have never waited for Congress to tell us how to act, how to behave, how to move,” said Sen. Rhonda Fields, D-Aurora. “If they don’t do their thing, I know we’re gonna do ours.”

The 71st Colorado General Assembly completed its abbreviated session on Monday, marked by masks, protests outside the building and angst over losing ground on programs and priorities.

What happens next under the gold dome in Denver has too many moving parts to predict with clarity, legislative leaders said on the way out the door when the General Assembly finally adjourned Monday.

Legislature made strides for the most vulnerable

Bob Mook: "Considering the daunting budgetary and deadline challenges that Colorado legislators faced because of the COVID-19 pandemic, the 2020 session was a tough, short and productive one for advocacy groups focused on the health and well-being of Coloradans."

The normal 120-day session called it quits Monday after 84 days, though it was 160 days in the making.