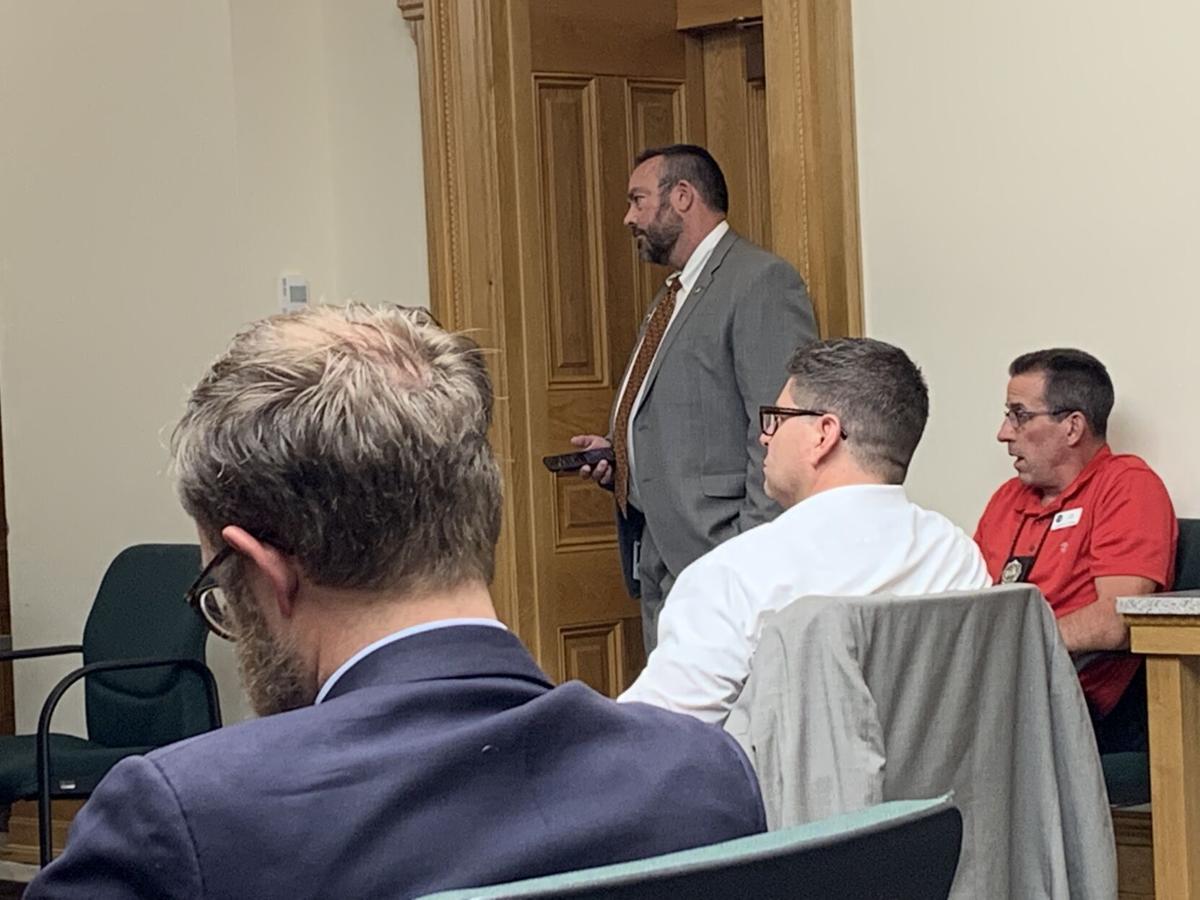 Minority Leader Hugh McKean, listening to the discussion of his leadership during a June 8, 2021 vote. McKean kept his leadership post in a 15-8 vote. 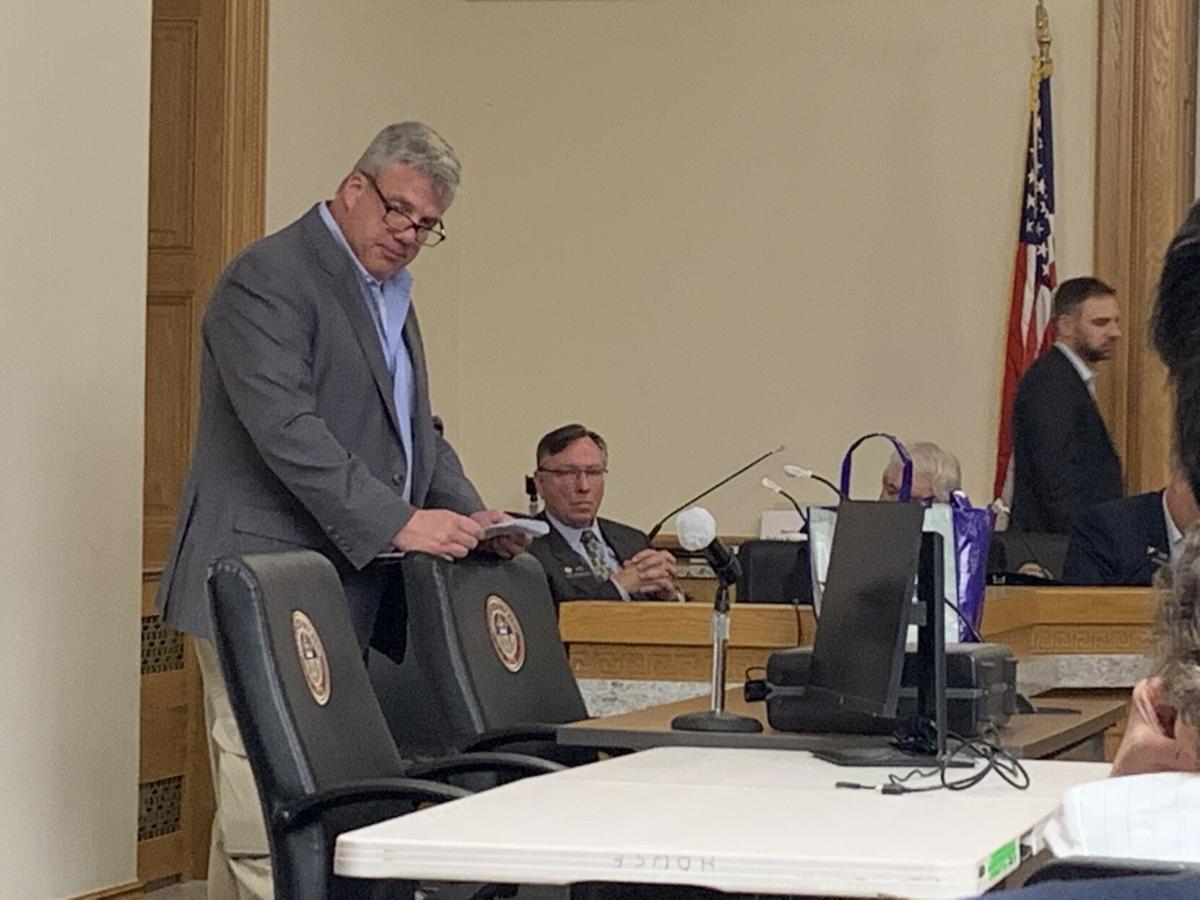 Rep. Ron Hanks of Canon City outlines the reasons for calling for a "no confidence" vote on Minority Leader Hugh McKean on June 8, 2021.

Minority Leader Hugh McKean, listening to the discussion of his leadership during a June 8, 2021 vote. McKean kept his leadership post in a 15-8 vote.

Rep. Ron Hanks of Canon City outlines the reasons for calling for a "no confidence" vote on Minority Leader Hugh McKean on June 8, 2021.

House Minority Leader Hugh McKean of Loveland beat back a last-day-of-session "no confidence" vote from his caucus, winning 15 votes in his support and eight expressing "no confidence."

McKean did not vote.

The "no confidence" motion was suggested by first-year lawmaker Rep. Ron Hanks of Cañon City, who laid out several points in support of his motion.

"We need to make some serious decisions about our direction and our efforts this summer regarding strategies on issues, communication, campaigns and candidates," he said. "There is no time to lose."

He complimented McKean for his leadership toward the session's end, but said his leadership earlier in the session led to disarray. Hanks said he would ask what's the plan on the bill, or how many bills will the Democrats get to pass before they start opposing them, and where the caucus should focus its fight.

He accused McKean of sticking to the Democrats' timeline for the session.

"The leftist agenda has left the caucus battle-weary," Hanks said. "There is a confidence of crisis brewing."

Hanks also pointed to McKean's vote on House Bill 1298, the background check bill, where McKean accidentally voted in favor. If the vote was mistaken, it demonstrates a lack of attention, Hanks said. "If it was intentional, it was and is a war against stalwarts of the Second Amendment."

Hanks also raised concerns about the caucus's 527 campaign finance committee, expressing fears that it will be used to defend McKean in an expected primary fight next year. He also criticized McKean for his direction for the communications staff. There's no shared long-term strategy and no daily tactical plan, Hanks said.

"We've been on our heels the entire session... . We need a better plan," he said.

"This is a mistake. We are a team," although they may not always agree on everything, he said.

"This is not the time," added Rep. Richard Holtorf of Akron. He offered a substitute motion to vote in a month, but McKean told the caucus to vote now.

"We are divided and will not walk out of here united," said Rep. Dave Williams of Colorado Springs, who outlined his own views of McKean's leadership. He asked that McKean not be involved in primaries next year against incumbent members of the caucus.

That's in contrast to what happened in 2020, when then-Minority Leader Neville supported a primary challenger to Rep. Colin Larson of Littleton.

The 527 campaign finance fund should belong to the caucus, Williams added, and he asked for a small committee, made of members in safe districts, who would have oversight over the fund.

Williams also criticized the press coverage of the caucus. "The press won't write anything good about Republicans," and he criticized how the minority office handles controversies, including leaks to the press. Finally, Williams asked for full transparency and accountability with how the 527 dollars will be spent.

"Dave, you're the leak," McKean responded. But he did agree on transparency of caucus funds and committee oversight. As to how the caucus handles the media, McKean indicated it is a two-way street, that members don't always communicate with the minority office. He also pledged not to participate in primaries against sitting members.

Initially, Bockenfeld asked that the vote be conducted in public, but members decided they wanted a secret ballot.

After the vote, Assistant Minority Leader Tim Geitner of Falcon said, "There are a lot of sour grapes in the room. This should put the issue to rest," and to Hanks, he said, "grow up."

Despite the tumultuous meeting, McKean told reporters afterward he was optimistic about the next legislative session.

“I think we come in a lot stronger and tougher,” he said. “I also think we’re in an election year so you’re not going to see as many radical things, because people don’t want to be answering for that at the polls."

Validation of McKean's leadership comes just hours after Rocky Mountain Gun Owners sent out an email survey, seeking "no confidence" votes of McKean from its members.

After the vote, the fight went to social media, between Dylan Mitchell, the deputy policy director for the House Minority Caucus and RMGO's Taylor Rhodes, with an assist from Democratic operative Logan Davis.

I guarantee I've done more for the @GOP in my 26 year than you will ever do.

Rhodes replied with an obscenity.

Rocky Mountain Gun Owners, a group closely linked with former Minority Leader Patrick Neville of Castle Rock, was among the forces on the right agitating for the removal of House Minority Leader Hugh McKean in the waning days of the legislative session.