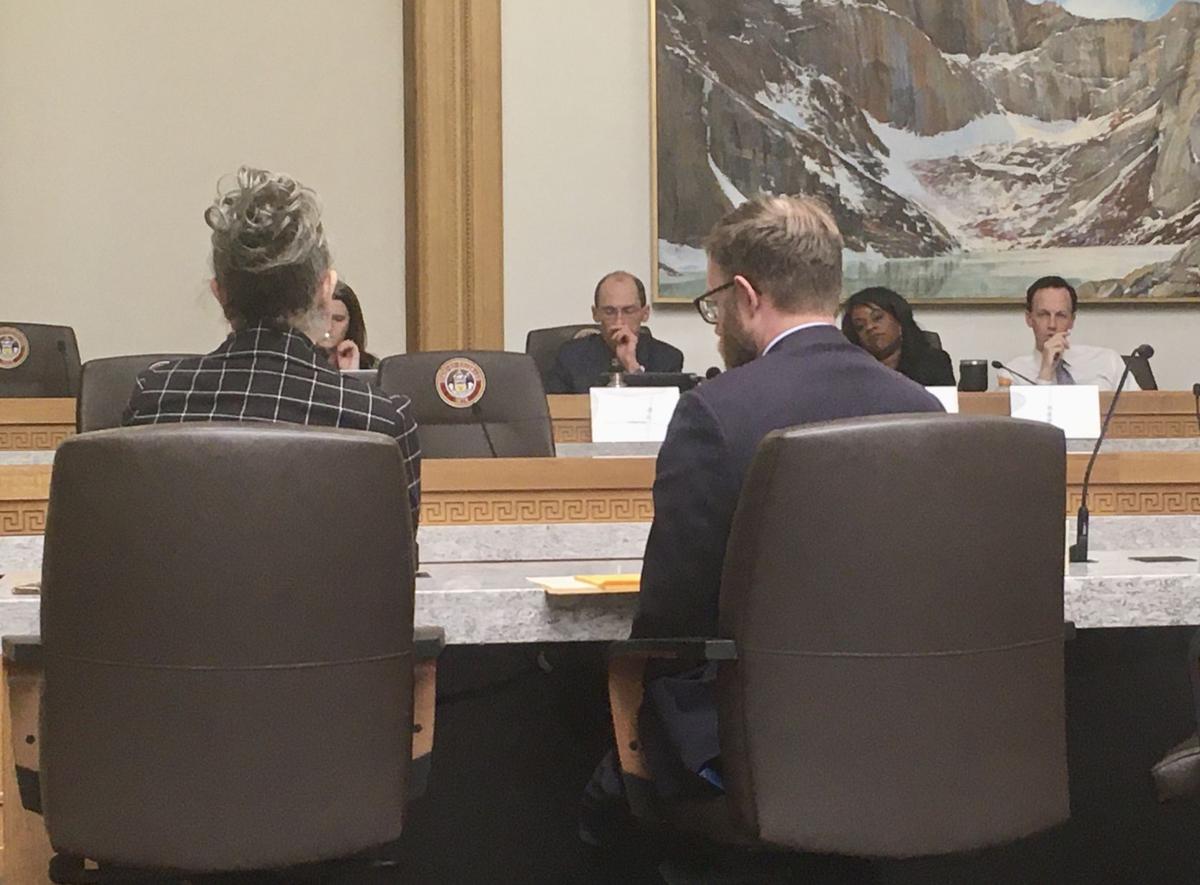 Reps. Dafna Michaelson Jenet, D-Commerce City, at left, and Matt Soper, R-Delta, present their bill to the House Judiciary Committee that would remove the civil statute of limitations for sexual misconduct and childhood sex abuse. 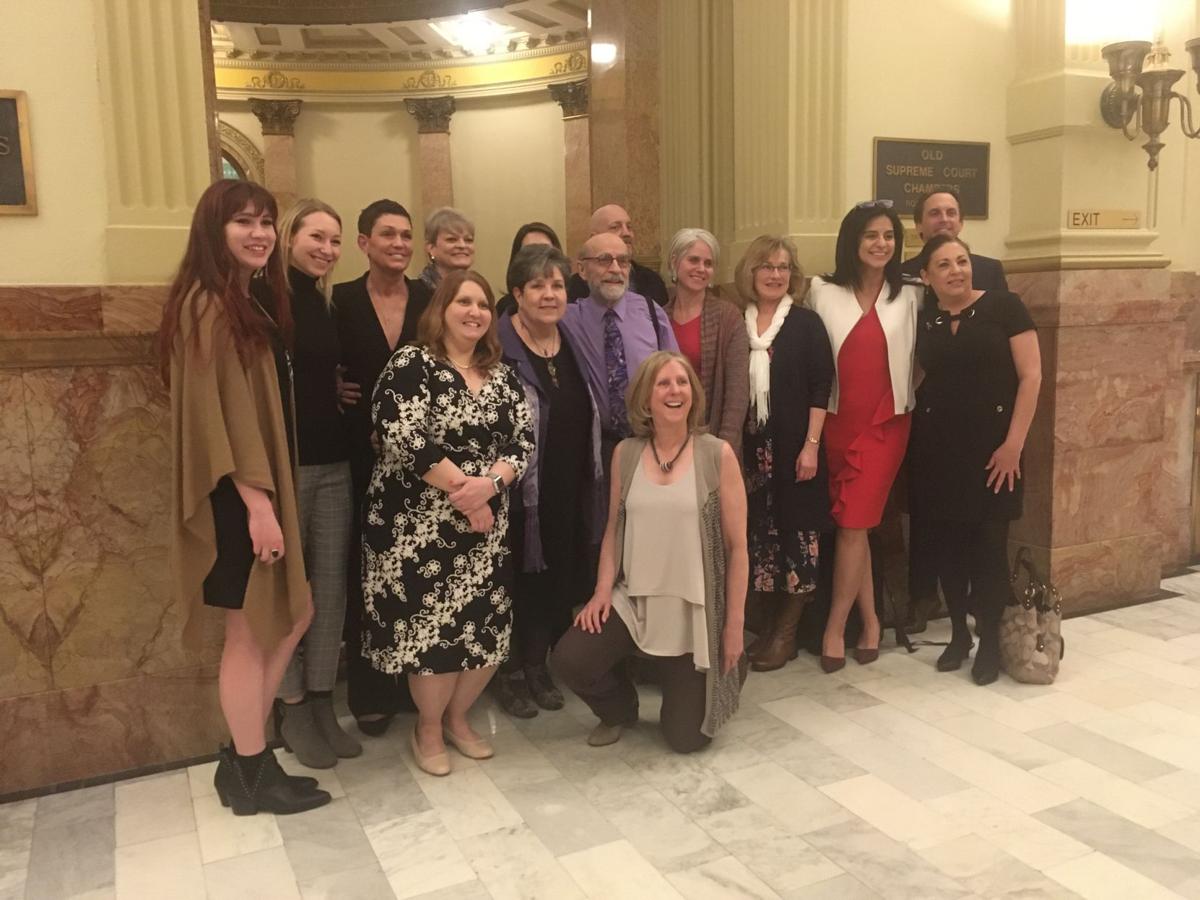 Witnesses who spoke in favor of House Bill 1296 to eliminate the civil statute of limitations for sexual misconduct pose for a photo after it passed the House Judiciary Committee on March 5, 2020.

Reps. Dafna Michaelson Jenet, D-Commerce City, at left, and Matt Soper, R-Delta, present their bill to the House Judiciary Committee that would remove the civil statute of limitations for sexual misconduct and childhood sex abuse.

Witnesses who spoke in favor of House Bill 1296 to eliminate the civil statute of limitations for sexual misconduct pose for a photo after it passed the House Judiciary Committee on March 5, 2020.

“I still have nightmares, and I can sometimes still feel his hands on me.”

“For most of you, a red bandana is just an article of clothing. For me, it’s a reminder of my assault, as it was placed around my mouth so I couldn’t scream.”

“The average age for a child to be sexually abused is nine years old. For me, I was 10.”

Dozens of sexual assault survivors and their allies lined up to share intimate details of their trauma on Thursday night as the House Judiciary Committee, for the first time since 2006, voted 8-1 to give victims of childhood sex abuse unlimited time to sue their perpetrators and the institutions that harbor them.

“I’d rather have an attorney tell a client, ‘we don’t have enough evidence to go forward with the case,’ than to say, ‘the statute of limitations has expired and we can’t proceed, even though we have good evidence,’” said the bill’s sponsor, Rep. Matt Soper, R-Delta.

Soper and Rep. Dafna Michaelson Jenet, D-Commerce City, crafted House Bill 1296 with the help of victim advocacy groups. The legislation would redefine childhood sexual abuse and other offenses against children and adults as “sexual misconduct,” and remove the time to file civil suits going forward. Currently, the civil statute of limitations is generally six years after a victim turns 18 to sue their abusers, and only two years after turning 18 to sue an institution or employer.

Calling the bill “historic,” Rep. Leslie Herod, D-Denver, said that she felt “the statutes in the past were not based on the reality that survivors faced. But it’s never too late to right a wrong.”

The single "no" vote came from Rep. Adrienne Benavidez, D-Denver, who said that while she might consider an extension of the statute of limitations by 30 or 40 years, she could not support complete abolition.

The last major attempt at removing the civil statute of limitations was in 2006, after The Denver Post reported on the allegations of adults who, as children, were victims of abuse at the hands of clergymen.

Although the legislature managed to abolish the criminal statute of limitations for childhood abuse incidents, the Catholic Church succeeded in convincing legislators to also waive immunity for government institutions, which doomed the civil statute proposal.

The lone witness to sign up in opposition to HB1296 was Michael D. Plachy, who represents the Colorado Catholic Conference, the advocacy organization of the state’s three dioceses.

However, Plachy called the complete elimination of the statute “bad public policy” because evidence becomes scarce, memories fade and witnesses pass away the longer a victim waits to come forward. The Conference also opposes lifting the cap on damages for older claims for the same evidentiary reasons.

His solution was to encourage victims to report to authorities sooner. CHILD USA, a Philadelphia-based nonprofit that tracks statute of limitations reforms, reports that the average age for a victim of child sex abuse to come forward is 52.

Under questioning, Plachy updated lawmakers on the church’s compensation program for victims of clergy abuse, established around the time that a report from the Colorado attorney general’s office in October revealed that at least 166 children likely suffered abuse at the hands of at least 43 priests since 1950.

Eighty-seven people filed claims, and the dioceses have paid out $1.2 million so far, with over 70 claims pending. Independent administrators decide the value of each payout.

Rep. Dylan Roberts, D-Avon, acknowledged that Plachy was in a difficult position of opposing the victims’ rights legislation, and asked whether he believed in lengthening the statute at all. Plachy responded yes, and cited other states that allowed victims to sue into their 30s, 40s, and 50s.

Michaelson Jenet seemed unsurprised by the lack of opposition, although she speculated that some opponents may have left, given the late hour at which the bill was heard.

Benavidez had concerns about HB1296’s inclusion of “other behavior of a sexual nature” in the new definition of sexual misconduct, in addition to specifically-enumerated unlawful behaviors such as sexual assault on a child.

Pamela Maass, a plaintiff’s attorney who helped write the bill, explained that the phrase was intended to cover behaviors that were not necessarily criminal, because there is no current equivalence between criminal cases and civil claims for sexual assault.

Sponsors insist on no lookback window

One of the highly contentious provisions of the 2006 statute of limitations proposal was the inclusion of a “lookback window,” which would have allowed victims whose statute of limitations had expired to revive their claims for a period of time. Michaelson Jenet and Soper ruled out that notion for HB1296 after receiving guidance that the Colorado constitution may prohibit such a legal maneuver.

A couple of individuals took a neutral position on the bill, largely because they desired a lookback window.

Bridie Farrell, a former Olympic speed skater, told legislators that at age 15, a teammate sexually abused her. When she came forward to the U.S. Olympic Committee, she said their suggestion was to sue the perpetrator. However, her statute of limitations had expired.

“Passing a bill that doesn’t allow survivors of past abuse to come forward is akin to giving a get-out-of-jail free card to predators and the institutions that covered it up,” she said. Farrell described HB1296 as a “past predator protection act, rather than an abuse-prevention act.”

Ted Trimpa said that while the Colorado constitution appears to create a “vested right” for alleged perpetrators to be covered under the statute of limitations, there is a possible “public interest exception” that lawmakers could deem warrants the lookback window, either as part of HB1296 or as separate legislation. Eventually, the state Supreme Court would decide its legality.

“The legislature, even though it can say, ‘we think this is unconstitutional,’ you have an opportunity here to say, ‘we’re going to challenge that,’” he said. “So it goes to the Supreme Court [and] we lose? Well then, we have an answer.”

Trimpa gave committee members a memo suggesting that they could find that lessening the traumatic impacts of assault, outing child predators, and lowering the costs of sex assault to victims were all possible grounds for the public interest declaration. He stressed that courts’ interpretations of the constitution, rather than an explicit provision in the document, were the barrier.

Committee Chair Mike Weissman, D-Aurora, responded that he thought the strategy was worthwhile, but that litigating the vested right could happen separately from legislative action.

Multiple people believed the bill’s title would not likely permit the addition of a lookback window to HB1296. Michaelson Jenet told the committee that she and Soper “spent a lot of time and a lot of pain in coming to the decision that in order for this bill to move forward, [the window] had to not be a part of this”.

“You will go to hell”

Of the more than two dozen witnesses, many were survivors of sex assault. Committee members sat stone-faced and people in the audience wiped away tears after hearing story after story of people who contemplated suicide, turned to drugs and even helped put comedian Bill Cosby in jail. Lawmakers heard the repeated refrain that trauma has no expiration date, so neither should a victim’s timeline for seeking justice.

Suzy Shotts said she was 10 years old when her grandfather began raping her. Her entire family saw the grandfather as “perfect, not as the sexual predator that he was.”

“The dynamic that he created made it impossible for me to speak up about what he was doing to me,” she said. “Who would believe me, a mere child, over the perfect grandfather?”

Shotts said at the age of 40, 23 years after the last episode of abuse, she developed vocal cord dysfunction. She labored to breathe or speak, caused by the trauma. She paid $15,000 for therapy and knew that she would likely need to return for the rest of her life.

“Survivors and victims should not be punished for not behaving the way that society thinks they should,” she said. “Passing this bill gives survivors an opportunity to take back some of the power lost in their childhood.”

Susan Leighnor showed the committee a picture of herself at age 10, when she attended Catholic school. One morning after Mass, she was told to see the priest. He raped her, then told her not to talk about it.

“He told me this was like confession. We don’t talk about what happens in confession, so we’re not going to talk about this,” she said. “And if you do, you will go to hell.”

Leighnor said she did not talk about her abuse, for fear of going to hell, until age 60.

“That’s unacceptable,” said Rep. Hugh McKean, R-Loveland, speaking to the manner in which the statute of limitations impedes victims who come to terms with their abuse as adults. “Thank you for what it took for you to come up here, and thank you for trusting us.”

OPINION | Trauma has no timeline for survivors of childhood sexual assault

Marilyn Van Derbur Atler: "There should be no statute of limitations in Colorado for survivors of childhood sexual assault to hold their perpetrators and enabling institutions accountable."