Update: Polis isn't the only Colorado governor on the "MeatOut" day issue...

Gov. Jared Polis has issued a proclamation naming March 20 "MeatOut Day," and it's a decision that is causing outrage among some in livestock organizations and rural Colorado counties.

"WHEREAS, removing animal products from our diets reduces the risk of various ailments, including heart disease, high-blood pressure, stroke, various cancers, and diabetes; and

"WHEREAS, a plant-based diet helps protect the environment by reducing our carbon footprint, preserving forests, grasslands and wildlife habitats, and reduces pollution of waterways; and

"WHEREAS, a growing number of people are reducing their meat consumption to help prevent animal cruelty; and

"WHEREAS, since MeatOut was launched in 1985, more than 35 million Americans have explored a plant-based diet and reduced their consumption of meat, dairy, and eggs; and major food manufacturers and national franchises are marketing more vegan options in response to this growing demand;

"WHEREAS, Colorado is the proud home to farmers and ranchers alike and we recognize the importance of agriculture in the state; THEREFORE I, Jared Polis, Governor of the State of Colorado, do hereby proclaim March 20, 2021, as MEATOUT DAY."

March 20 is four days before the state and General Assembly are slated to celebrate Colorado Agriculture Day, an event that usually includes the governor.

State Sen. Jerry Sonnenberg, R-Sterling, talked about the proclamation on the floor of the Senate on Friday, and he was frustrated and furious by recent attacks by Polis on the ag industry.

MeatOut Day is to encourage the consumption of processed plant products that Sonnenberg said includes soy protein concentrate, coconut and sunflower oil, cultured dextrose, food starch, salt, zinc, gluconate, sodium ascorbate, and other ingredients, which have to be added because the products lose the benefit of fresh vegetables.

Sonnenberg asked lawmakers to "stand up for agriculture," which he says adapts to consumer demand. Coloradans support a balanced diet, he said.

The state doesn't have a problem with people who want plant-based diets. But the national perception is that Colorado is against agriculture, Sonnenberg said. That includes a recent announcement by a Hereford (cattle) association. Sonnenberg said the association's board is planning to vote on moving from the National Western Stock Show to a livestock show hosted at the same time in Oklahoma City. The association, according to Sonnenberg, said Polis' proclamation for MeatOut Day was "the last straw."

Sonnenberg noted comments made by Gov. Kevin Stitt, a Republican, who name-checked Colorado's capital city in his State of the State address on Feb. 1. “The folks in Denver turned their back on the ag industry,” Stitts said. “They wouldn’t let them have their major national cattle show, because they insisted on keeping their state locked down. That put the stability of the U.S. beef industry in danger."

Shortly thereafter, Polis and Commissioner of Agriculture Kate Greenberg sent out a joint statement on Feb. 3, pronouncing the state's support of agriculture, including livestock.

“The agriculture community is the cornerstone to the foundation of our state," Polis and Greenberg wrote. "In fact, the state had a Cattlemen’s Association before we had a capitol. My administration has done everything possible to successfully keep agriculture open for business through the toughest of times because we understand that agriculture is Colorado. We are also steadfastly committed to the future of agriculture."

Oklahoma City is dying to get their hands on the stock show, Sonnenberg said Friday. "We can't have the leadership in this state throw the number two industry in this state under the bus ... . Yes, I’m angry. It’s my business. It’s my neighbor’s business and it’s the district I represent.”

The one positive, he said, is that county commissioners in rural counties are drafting resolutions to support a local March 20 Beef Day.

The Colorado Cattlemen's Association also has joined, announcing this week that the MeatOut Day idea, a national movement, is "harmful and falsely critical of agriculture and meat production." The CCA is teaming up with restaurants, grocery stores and other retail operations to feature a meat product on March 20 — a "MeatIn" Day, to support the beef and meat industries and to combat the misinformation tied to MeatOut Day, according to a CCA statement.

Sonnenberg pleaded with his colleagues to "be a part of the solution so we can bridge that gap as ranchers and farmers produce the food, fiber and energy that this state and country and world needs."

This isn't the first, second or third time Polis has been blasted for what critics call an anti-agriculture perspective. He started a firestorm in August 2019, when he told employees at the Colorado Department of Agriculture that they should be promoting vegan alternatives such as the Impossible Burger, which is made from soybeans (which aren't grown here).

He has also made nominations to state boards and commissions that exclude production agriculture representatives, such as to the state Parks and Wildlife Commission and to the Colorado State Fair board, a major event for 4-H and livestock. His nominations in 2019 to the fair board meant no one from the Eastern Plains, where the majority of the state's ag industry is located, would be represented.

Last year, Polis nominated Ellen Kessler of Littleton to the state veterinarian board. Kessler, an animal rights activist and an associate of Reis, has made social media posts criticizing the ag industry, including sharing a post that claimed dairy farmers are taught to sexually abuse their cows, and that 4-H does not teach its members to respect livestock. The governor's office told Colorado Politics they don't monitor the social media posts of their appointees.

The next battle could be over a ballot measure filed on Feb. 22 with the Secretary of State that could lead to a ban on accepted livestock practices. The measure was submitted by Alexander Sage, an animal welfare activist in Broomfield, and Brent Johannes of Boulder. The measure is known as PAUSE: Protect Animals from Unnecessary Suffering and Exploitation.

The measure spells out the lifespan of a cow, chicken, pig, goat, sheep or turkey. It then says those animals cannot be processed until they've reached a quarter of their life-span. For example, a cow could live to 20 years, and under the measure could not be processed until it reaches five years. That's not how the cattle industry works; according to the US Department of Agriculture, most cows and steers are processed between 30 to 42 months.

The same applies to sheep, which the ballot measure said can live to 15 years. At one-quarter its lifespan, that's just under four years. Lambs are slaughtered at six to eight months, according to the USDA. Colorado lamb is among the most-renowned worldwide; the website to-table.com says chefs nationwide "hail its superior flavor and texture, in part because it is grown for meat, not wool."

Polis was asked about the MeatOut proclamation during his Friday news conference. He noted that he does hundreds of proclamations every year. To the cattle industry, Polis said, "I've focused since Day One to expand markets for Colorado's beef markets," such as in Taiwan. He also said he's toured Colorado ranches, and that during his quarantine after testing positive for COVID-19 learned to develop cooking techniques around "underappreciated" cuts of beef, such as flank.

"I'll put my brisket up against anyone's," he said.

Through a spokesman, Denver Mayor Michael Hancock refused to criticize Polis but said that he "recently met with the association to reiterate the important role the Stock Show and agriculture play in our city, and we certainly hope they stick with Denver. The Stock Show is in our DNA and has been for the last century, and we’re excited to see it return in 2022 and beyond. The ongoing investments and work underway to transform the National Western Center into the best facility of its kind in the world will make the campus the global center for the ag industry." 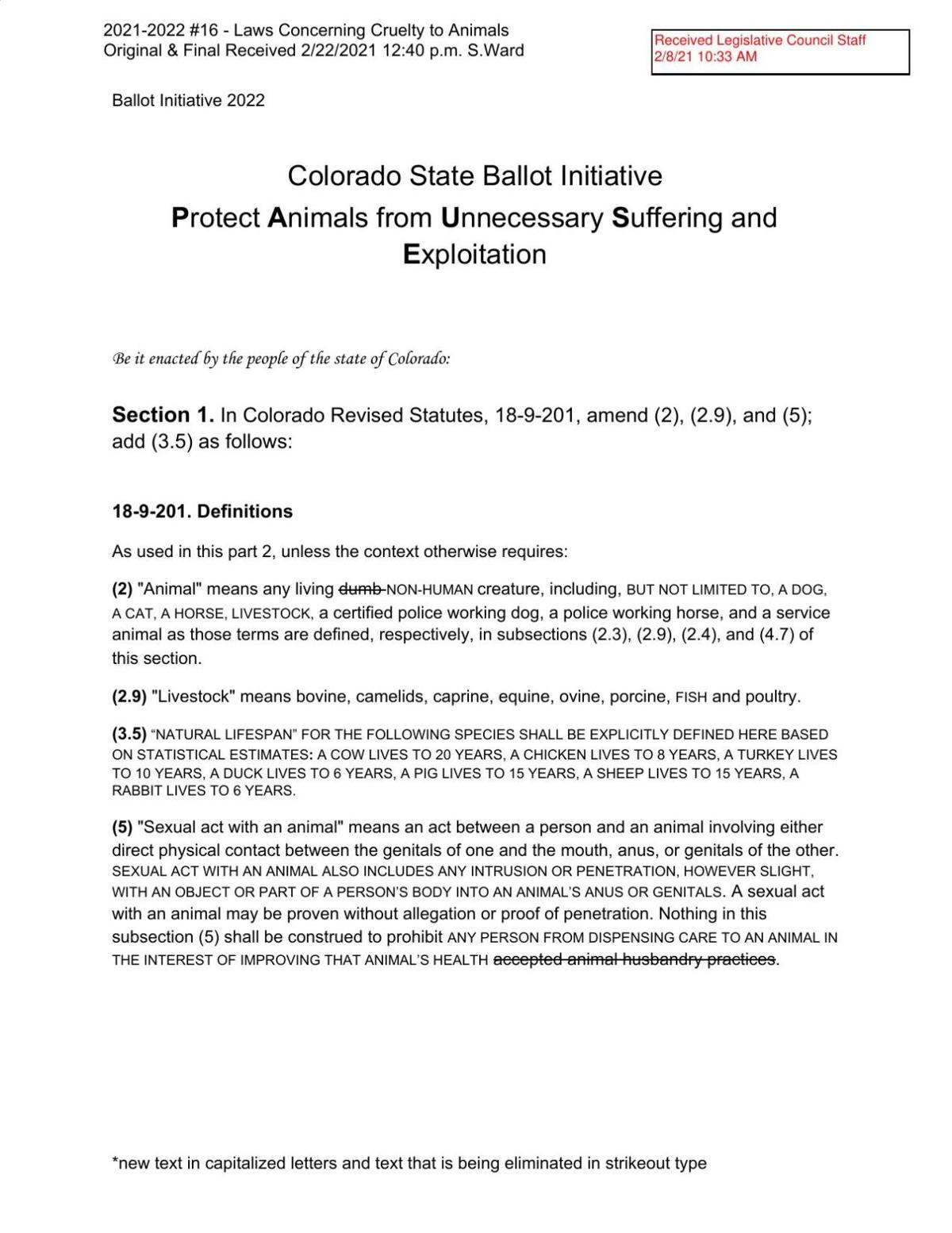 Gov. Jared Polis sees a future for Colorado with less meats and more profits, he said Thursday morning while dining on a Burger King Impossible Whopper in his office at the Capitol.