The law, however, applies only to offenses committed after July 1, 2020.

The governor also commuted the sentences of the three African-American men on death row, Nathan Dunlap, Sir Mario Owens and Robert Ray, to life without the possibility of parole.

The law adds Colorado to the 21 states and the District of Columbia that have repealed death penalty statutes. Four states, including Colorado, have imposed moratoriums on executions.

Backers of the repeal claim it has been used disproportionately against African-Americans. Those who opposed the repeal pointed to cases like that of Christopher Watts of Frederick, who murdered his wife Shanann and their two young daughters in 2018. The death penalty was taken off the table after he led law enforcement officers to the oil field where he had disposed of their bodies.

The 2020 version succeeded where efforts failed in the past, including in 2019. Three Senate Republicans voted in favor of the bill on Jan. 31.

SB 100 was sponsored by Sens. Julie Gonzales, D-Denver and Jack Tate, R-Centennial. Tate told Colorado Politics Monday that he sponsored the bill after a year of reflection. Last year, Tate said he was undecided on the policy. "My gut told me it was the wrong policy, but I couldn't get there without further reading and reflection." Over the summer of 2019, he came to the conclusion that the death penalty "is ineffective,  it doesn't do what it purports to do, it doesn't provide services to victims' families and it is inequitably applied." It didn't make sense to him from a liberty, religious or moral perspective, he said. "Those arguments held more sway to me than the arguments made by the prosecutors. I don't think the power of the state should  include the power over life and death of a citizen."

The 19-13 vote included two "no" votes from Sens. Jessie Danielson, D-Wheat Ridge, and Rhonda Fields, D-Aurora, who became a state lawmaker after her son and his fiancée were murdered. In the House, SB 100 passed on a 38 to 27 vote that included three Democrats who voted no: Reps. Kyle Mullica of Thornton, Tom Sullivan of Centennial and Brianna Titone of Arvada. House sponsors were Democratic Reps. Jeni Arndt of Fort Collins. and Adrienne Benavidez of Denver.

Sullivan's son, Alex, was murdered in the Aurora theater shooting in 2012, a case where the death penalty was sought but rejected by an Arapahoe County jury in 2015.

Ray and Owens were convicted of the 2005 murders of Javad Marshall-Fields and his fiance, Vivian Wolfe. His execution was put on hold in 2013 by then-Gov. John Hickenlooper. In a tweet Monday, Fields said the governor "commutes capital punishment sentences of those who killed my son and bride to be. In a stoke of a pen Gov Polis hijacks justice and undermines our criminal justice system."

Dunlap was convicted of murdering four people at a Chuck E. Cheese restaurant in Aurora in 1993. The four were Ben Grant, 17; Sylvia Crowell, 19; Colleen O'Connor, 17 and Margaret Kohlbert, 50. A fifth person, Bobby Stephens, survived the shooting.

In his statement on the commutation, Polis said, “commutations are typically granted to reflect evidence of extraordinary change in the offender. That is not why I am commuting these sentences to life in prison without the possibility of parole.

“While I understand that some victims agree with my decision and others disagree, I hope this decision provides clarity and certainty for them moving forward. The decision to commute these sentences was made to reflect what is now Colorado law, and done after a thorough outreach process to the victims and their families,” Polis said. 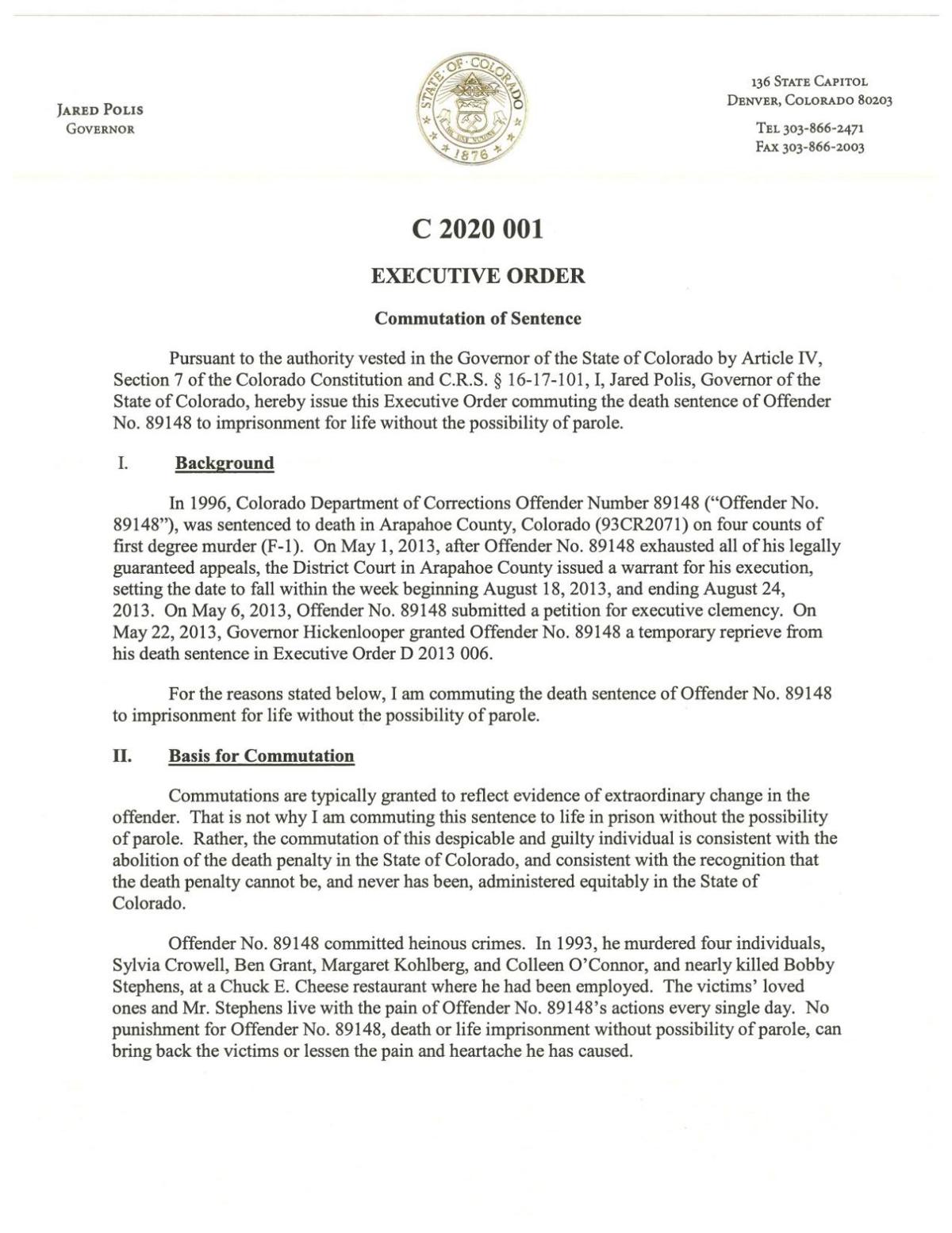 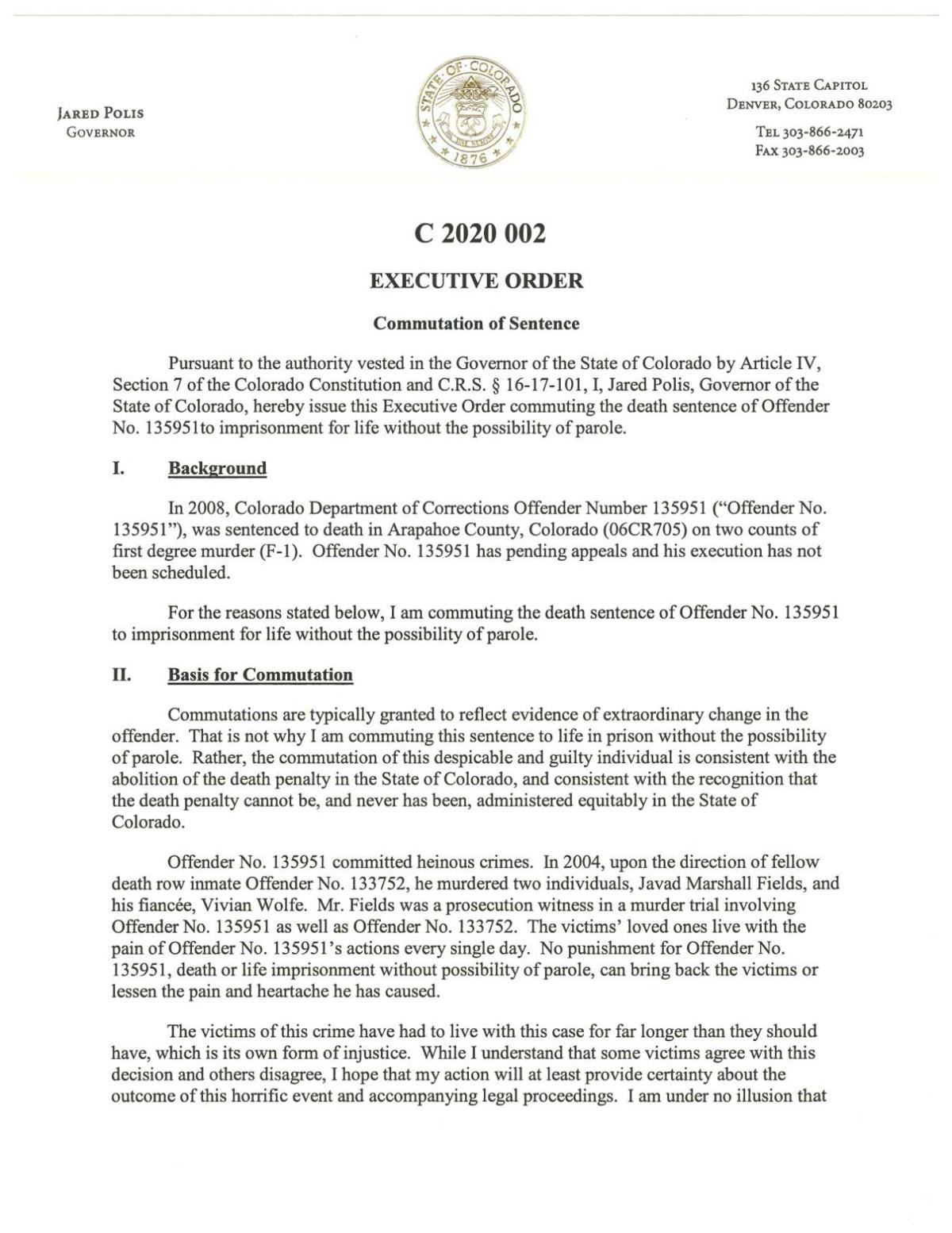 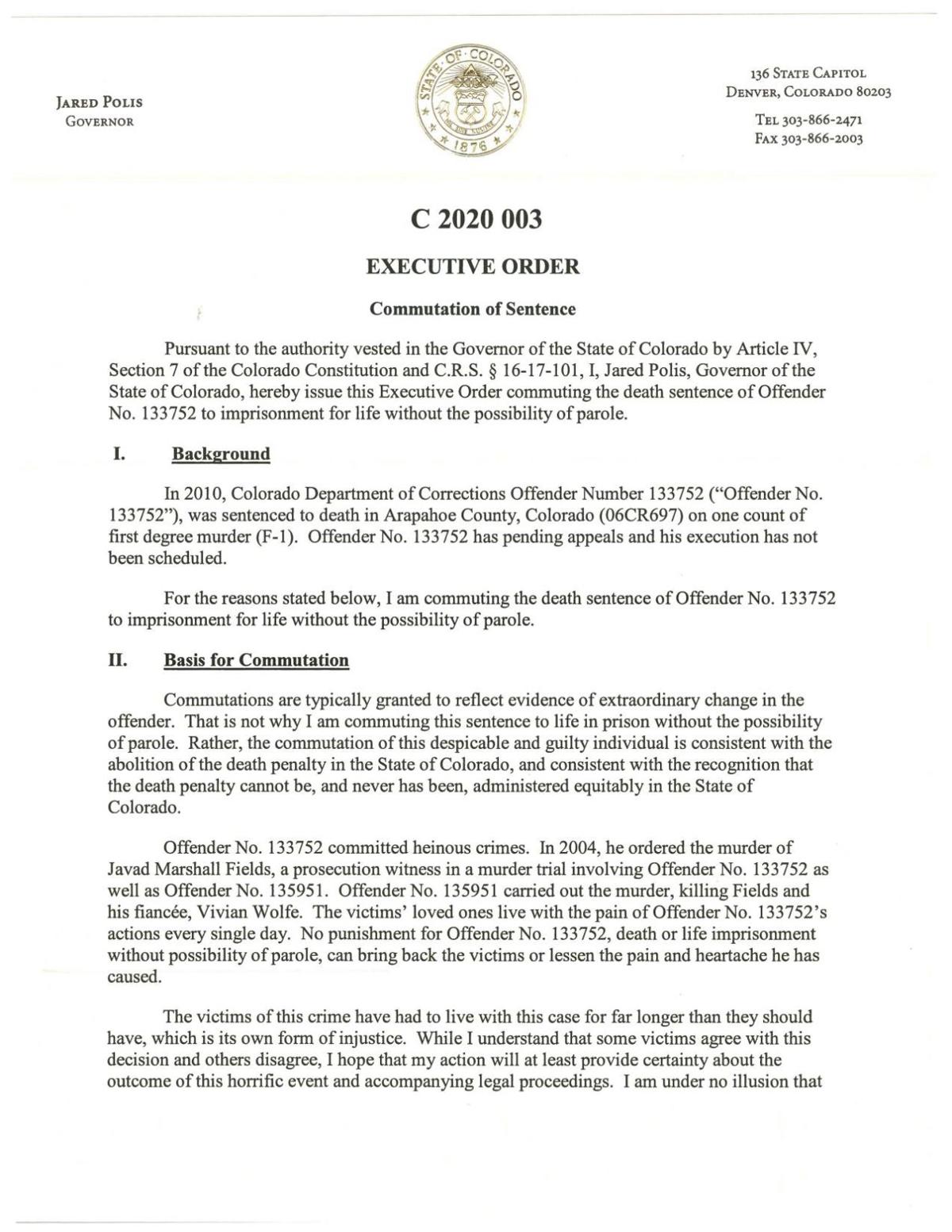 Hannah Cox of Conservatives Concerned About the Death Penalty said in a statement that “although Republicans are not in the majority in the Colorado Legislature, they were among the prime sponsors of the bill and their support made it possible to repeal the death penalty. They felt capital punishment did not align with their conservative principles of valuing limited government, fiscal conservatism, and life.”

Colorado Revised Statute 16-17-102 makes clear that the governor must submit any application for commutation to the district attorney and make efforts to seek the comments of the actual prosecutors from the criminal case before approving such applications, Brauchler said.

"This governor has never reached out to me or any member of the prosecution team, all of whom are still in the area, for any comments, consultation, or input of any kind before rescuing these heinous, cold-blooded murderers from their earned sentences," he said. "I learned about the news of these historic commutations on the largest cases in Colorado from a staffer in the governor’s office only hours before it was announced."

Brauchler also pointed out that Polis commuted the sentences of Owens and Ray even though neither had ever applied for commutation. Their cases are still in the appellate process, Brauchler pointed out.

The governor "apparently decided on his own, without any consultation or input from our office, to reduce their sentences forever to mere life in prison. That does nothing to end their appellate process. Instead, they will get to continue to challenge their guilty verdicts and seek a new trial, but this time, they only face life in prison," he explained.

There was no urgency in commuting those sentences, Brauchler claimed. "The decision to do it during a global pandemic is disrespectful to the victims, the jurors and the public. It is not leadership, but weakness and political opportunism."

For Rep. Rod Bockenfeld, R-Adams County, and Rep. Bri Buentello, D-Pueblo, the vote to repeal the death penalty was personal, not politics.