Republican lawmakers Tuesday called on Gov. Jared Polis to bring the General Assembly back for a special session to address K-12 education in the era of COVID-19.

A news release claims parents have made an "overwhelming outcry" over "the future of their children’s education during the COVID-19 pandemic" and called on Polis to bring lawmakers back to deal with the issue.

GOP lawmakers propose diverting public education dollars directly to parents whose children cannot attend public schools full time due to the virus, either because the children are at risk or because the local school district has decided not to hold in-person classes.

Under this proposal, which the GOP letter called "Safe Learning Choices," families "would be entitled to all or a portion of their child's per pupil revenue to access the educational resources they need to thrive during the pandemic. The funding would allow parents to remain at home, engage an educator, purchase quality curriculum and materials, and if necessary, the computers and broadband service to ensure access."

Colorado's public education funding was slashed in the 2020-21 budget by $621.4 million, adding it to the debt the state already owes K-12 education.

According to a statement from Sen. Bob Gardner of Colorado Springs, “Colorado's parents are concerned both for their children's health and their education. If we act quickly, we can provide parents with the resources to educate their children in home or in small groups arranged by them to ensure that their children don't fall behind.

"The legislature needs to meet now to ensure that single parent families and our most economically challenged parents have the economic resources to provide for their children's education. We have solutions. We ask the Governor to call a special session now so that we can provide parents with the resources they need."

Sen. Paul Lundeen of Monument added that "the instinctive drive of parents to find the best learning opportunities for their school-age children transcends politics. We need to give them safe learning choices during our battle against COVID-19."

But questions have been raised about whether online learning is truly effective. President Trump has demanded that public schools reopen in the fall, except where COVID-19 is raging.

Senate President Leroy Garcia of Pueblo called the letter little more than a political stunt. Garcia said he first heard about it via Twitter and had not seen the letter, and that Senate Minority Leader Chris Holbert of Parker never contacted him about the proposal or the letter.

Garcia pointed out that it takes either the governor's consent or a two-thirds vote of both chambers of the General Assembly to call for a special session, and that the executive committee is slated to meet next week to discuss interim committees that could look into further actions required in the pandemic.

"This is a political stunt to create political wins for them," Garcia told Colorado Politics. "What I see in their proposal is a very narrow-minded approach that doesn't include perspectives from teachers, elected school board members or students."

These are discussions that need to take place within local school districts, he said.

And the amount of money that would have to be diverted would be significant, Garcia said. "Is their proposal to close schools?"

Senate Minority Leader Steve Fenberg of Boulder tweeted that Republicans are exploiting the pandemic "to accomplish something that has been on their ideological wishlist for a generation: defund public schools and implement a voucher system."

Republicans are exploiting the pandemic to accomplish something that has been on their ideological wishlist for a generation: defund public schools and implement a voucher system. #copolitics https://t.co/ETRBwXQwLG

Speaker of the House KC Becker of Boulder told Colorado Politics that "there is real concern among teachers and parents on what will happen this fall with schools reopening. But I don't want to rush to a special session and I don't believe in vouchers. They're using the pandemic as a way to promote vouchers, and it would defund public education.

"There's a legislative concern on what's happening with schools but this is the wrong solution. We need to drive down the infection rate so that our schools and economy can get on the right track," Becker said.

The letter was signed by all 16 members of the Republican Senate caucus and 20 out of 24 members of the House GOP caucus. The four who didn't sign: Reps. Perry Buck of Windsor, Steve Humphrey of Ault, Shane Sandridge and Dave Williams, both of Colorado Springs. Williams' wife, Emily, recently started a homeschooling company, Homeschool Freedom Academy.

Educators have raised concerns about returning to the classroom in the fall. Several districts have said they will do online learning only, or in the case of Douglas County, a hybrid approach with some in-person learning and at least one day a week of online learning.

The last special session, in 2017, ended with a stalemate between the GOP and Democrats over an error in legislation adopted in the 2017 session that applied to special districts.

This story will be updated. 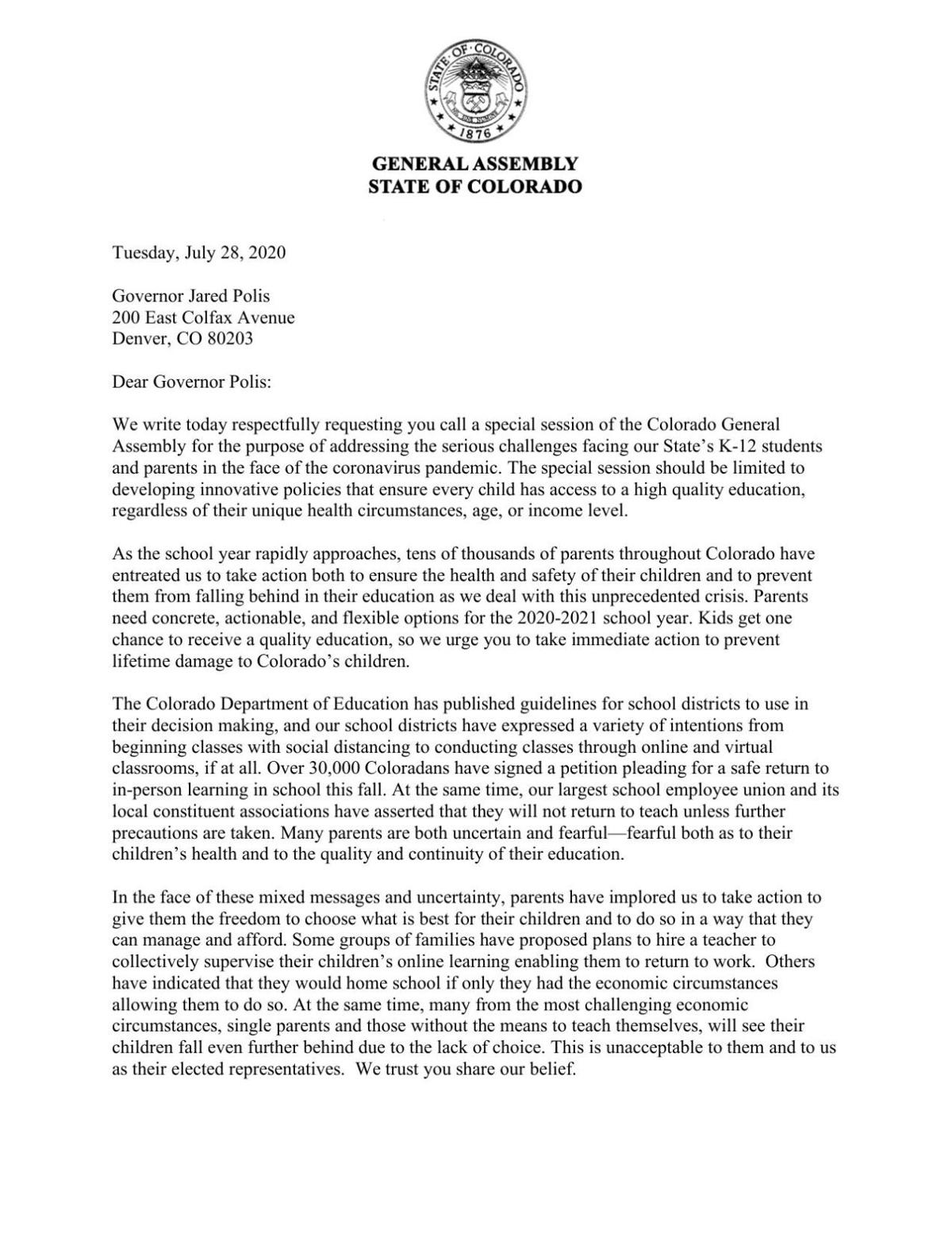 Garcia, other Democratic veterans call out Trump on remarks

“How can our service members entrust their lives to a man who befriends dictators, pardons war criminals, and demonstrates such blatant disdain for the sacrifices of our veterans? As commander in chief, this betrayal of our armed forces cuts particularly deep.”