The House holds a moment of silence for the 10 victims of the mass shooting in Boulder, March 23, 2021. 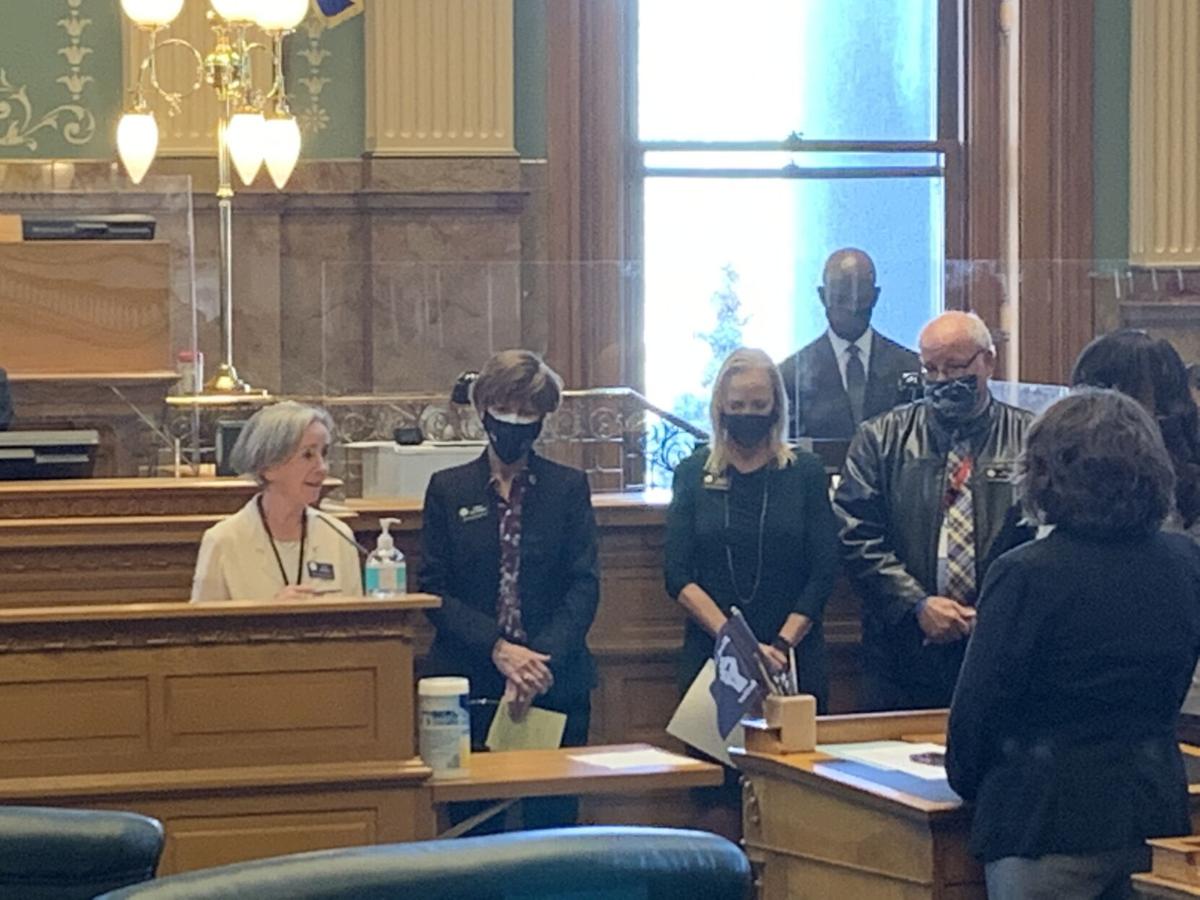 Rep. Judy Amabile, D-Boulder, reads off the names of the 10 victims of the March 22 shooting in Boulder. Other members of the Boulder delegation -- Reps. Karen McCormick, D-Longmont and Tracy Bernett, D-Boulder -- stand at her side. 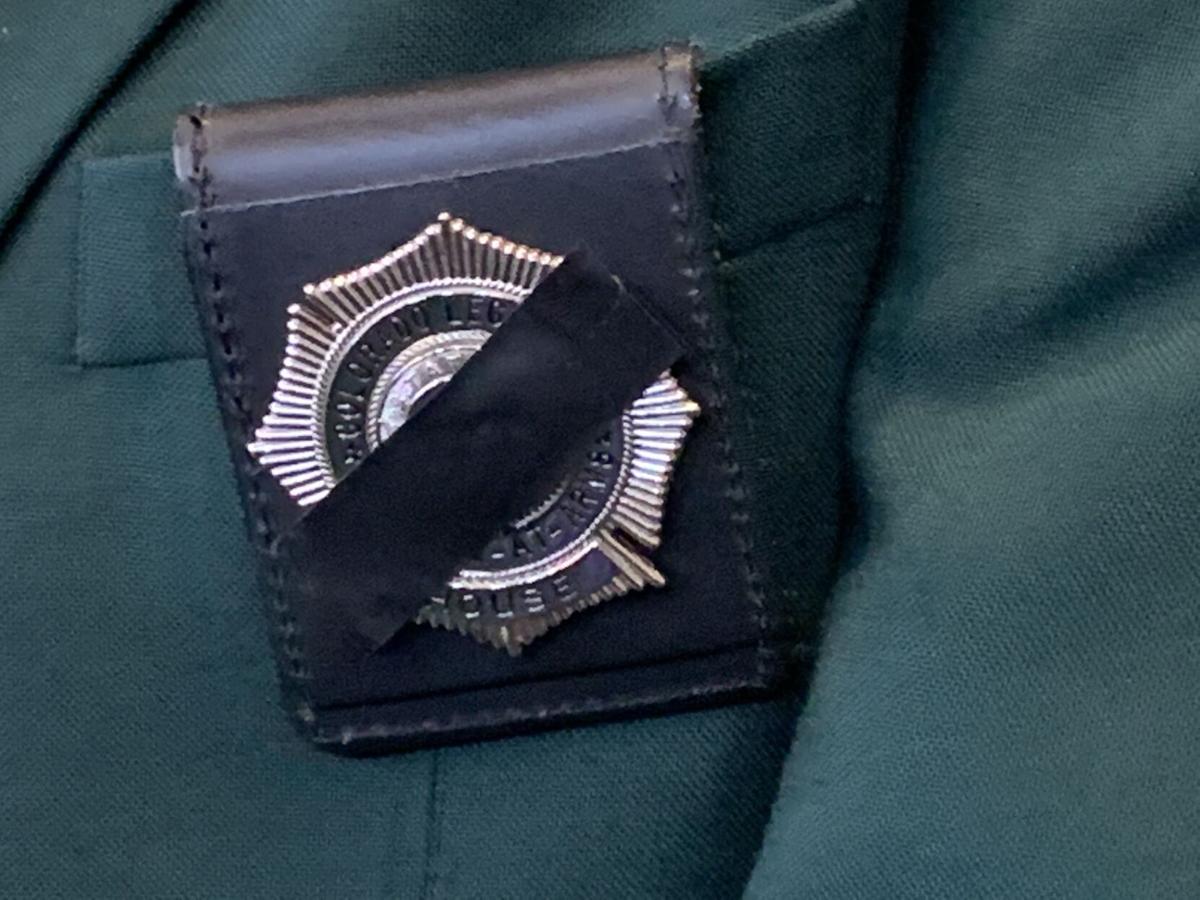 The House sergeants on Tuesday all had black tape across their badges in honor of Boulder Police Office Eric Talley, who died in the line of duty on March 22, 2021. 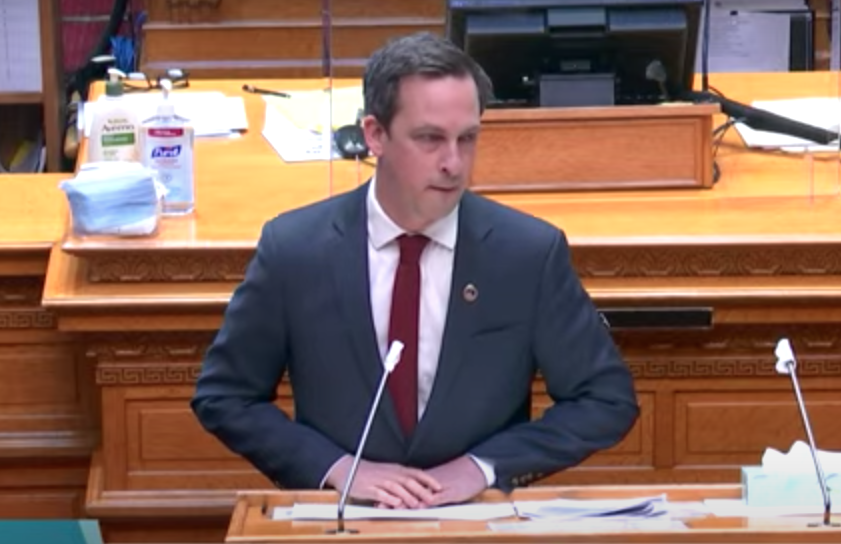 Sen. Steve Fenberg, D-Boulder, speaks about Boulder Police Officer Eric Talley, who died in the March 22 shooting at the south Boulder King Soopers on the Senate floor on March 23, 2021.

The House holds a moment of silence for the 10 victims of the mass shooting in Boulder, March 23, 2021.

The House sergeants on Tuesday all had black tape across their badges in honor of Boulder Police Office Eric Talley, who died in the line of duty on March 22, 2021.

Lawmakers, many speaking through tears, paid tribute to the 10 victims of Monday's shooting at a King Soopers in south Boulder. The morning featured calls for action, for mental health assistance, for making it harder to get guns.

The House's morning business was entirely devoted to honoring the victims of the shooting.

Rep. Judy Amabile, D-Boulder, read the names of the 10 victims, including Boulder Police Officer Eric Talley, 51. "Yesterday, my town, my district, my community, became the latest victim of a mass shooting. This sad American phenomenon made its way to Boulder."

Amabile spoke of the King Soopers employees who have put their lives on the line during the pandemic, and when the light is at the end of the tunnel, to have this happen.

Noting the upcoming moment of silence, Amabine said, "I don't want to be silent. The victims won't hear our silence. We have to speak with our actions, make it easier to get mental health services than to get a gun."

"I apologize, I'm very raw about this. It keeps happening and my heart doesn't have time to heal in between," added Rep. Karen McCormick, D-Longmont. She read off a list of dozens of places where mass shootings have taken place in the last 36 months. "Our people, your people, do not feel safe ... we're not safe. Feeling safe is an illusion. Being safe is something we can do something about." McCormick said the ability to have life, liberty and happiness is being taken away, one shooting after another. "How much courage will it take to defend our way of life, our peace?"

Rep. Tracy Bernett, D-Boulder, said even in beautiful Boulder, guns shatter lives and leaves everyone shaken. "We remember the names of the places, but we move on far too quickly and leave with the families of the victims to deal with the pain of the loss on their own." Long after the TV cameras are gone, she said, this pain will persist in Boulder. "I hope this body can honor the victims with our silence and prayers and with our action."

One of the two members of the legislature who has lost a loved one to gun violence spoke of how he gets through days like this. When he knows the days are going to be rough, Rep. Tom Sullivan, D-Centennial, whose son Alex, died in the 2012 Aurora Theater shooting, said he wears his son's jacket, as he was on Tuesday. "I need his strength," Sullivan said. "I need to feel him holding me and telling me 'Dad, you can get through this.'"

Sullivan said the House has too much practice at moments of silence, just a week after one remembering the victims in last week's Atlanta shooting.

Rep. Edie Hooton, D-Boulder, choking back tears, that her beloved Boulder has never seen such tragedy. "We have felt like a matter of if but when ... I know every person feels deeply for the community. What we need in these times is to reach out to each other. What happens to Boulder happens to Colorado."

The Boulder Police Department early Tuesday released the identity of the suspect who allegedly shot and killed 10 people, including one of its own officers.

Authorities identified nine more victims who were killed in a mass shooting at a King Soopers in Boulder on Monday afternoon.

Rep. Iman Jodeh, D-Aurora, said the Muslim community only recently remembered the two-year anniversary of the massacre at the mosque in New Zealand. "The Muslim community stands in solidarity" with Boulder. "More than thoughts and prayers," she said, "which sounds nice but do nothing. The Muslim community offers action. I will vow to stand in action with you while silently praying for your community."

In the Senate, Fenberg took to the podium, momentarily speechless, but when he spoke, his voice shook. "We see this happen in other communities, and then one day it happens in your own." He struggled to speak, his face also betraying his emotion. He also read the names of the victims, asked for a moment of silence and for the Senate chimes to ring.

Fenberg said he recognized Talley's name from a 2013 Boulder Daily Camera story about Talley rescuing ducks from a drainage ditch. "The one thing that faded away in the past year" that people didn't notice was an absence of mass shootings. "It started to feel like we were getting back to normal" although many are still feeling the effects of the virus, whether jobs or health. But with the return of normal, what's coming back is mass shootings.

"We can't go back to normal," Fenberg said. But normal includes devastating events, "and that can't be the normal we return to."

Fenberg didn't advocate for a certain policy change, but said those conversations should still happen. "These are my constituents," Fenberg, who lives just blocks from the King Soopers, said. "It's not too soon to talk about policy or politics." But "too soon" can't be the response, he added.

For these 10 individuals, it's too late, he added. And while Fenberg said he doesn't know the answers, but they should strive toward changing this normal so that people don't pick up groceries in fear or go to school in fear.

Fenberg also mentioned a Boulder Court decision that overturned a city ban on assault weapons, just four days ago. "I hope in these next few weeks...that we allow for a conversation about what makes different communities feel safer so that they can take matters into their own hands when appropriate. "

This is a community that wanted to make people feel safer, Fenberg said. "They should have that right."

Senate Minority Leader Chris Holbert, R-Douglas County, read the words of Miami Herald columnist Leonard Pitts, written after the 9/11 attacks. "You monster! You beast! You unspeakable bastard! What lesson did you hope to teach us by your coward's attack? ... Whatever it was, please know that it failed."

Holbert also asked that people not give recognition or fame to the shooter, whom he would not name, stating he hoped not to remember it.

Sen. Sonya Jaquez Lewis, D-Longmont, whose district includes much of the county outside of Boulder, said she served on a board with Jody Waters, one of the shooting victims. "This violence has to stop. This insanity has to stop." She asked for support for the gun control bills moving through the General Assembly as a tribute to the victims.

Several paid tribute to Talley, including Sen. John Cooke, R-Greeley, a former county sheriff, and Sen. Rhonda Fields, D-Aurora, whose son and his fiancee were murdered.

"Where are we safe in our community?" In churches, movie theaters, schools or grocery stores? "No," Fields said. "Rest in peace, Officer Talley. All I have is our thoughts and prayers."

'They want to take our guns': Lauren Boebert ripped for fundraising email hours after Boulder shooting

"I will fight this new attack on our sacred rights with everything I have," Boebert said in the fundraising email, which was obtained by Colorado Politics.