Repeated efforts by state Rep. Ron Hanks, a Cañon City Republican, to demand an independent forensic audit of the 2020 elections has now drawn reaction from within his district.

Fremont County Clerk and Recorder Justin Grantham, in an undated letter from July, called out Hanks for claiming the first-year lawmaker had reached out to nearly all the county clerks in his district regarding the election.

Hanks made that claim in a July 14 online show, "On the Right Side."

Grantham said in the letter he had been watching Hanks since the November 2020 election, and had invited him and Rep. Stephanie Luck, R-Penrose, for a tour of his office and to give them an opportunity to ask questions. Hanks has never responded to that invitation, Grantham indicated.

"If election integrity as important to you as you have been fighting it would have been a priority. I am truly surprised you never made the time to have a conversation with the chief election official of the county that you reside in and represent.

"The misinformation being spread has led to multiple threats on Clerks including myself. Serious threats have happened in your own district due to the misinformation. This has forced a remodel of the Chaffee County Clerk’s Office to protect her and her staff from threats of violence," Grantham wrote.

Grantham noted that he traveled to Denver during the legislative session to participate in a Republican Study Committee of Colorado meeting, which he believed would include determining future bills for Republicans. However, the meeting was not about collaboration, Grantham wrote. Instead, "it was all out attack on Republican Clerks about the 2020 election. The Clerks that attended, were defending against mathematical and statistical probabilities, 'possible' computer system vulnerabilities, election processes, rules, laws, and threats of violence on more than one occasion," Grantham wrote.

"It appeared that the committee was instead looking for someone to blame for President Trump's loss in the November 2020 election."

In the July 14 show, Hanks claimed he had spoken to all but one county clerk in his district.

"You have not had any election discussion with myself, Debra Green in Park, or Kelley Camper in Custer!" Grantham said. "You have been a huge advocate of election integrity and transparency and I thank you for that, however you have never expressed an interest or a concern about elections to myself or other professionals conducting elections at the county level."

Grantham also suggested Hanks sign up as a party election judge, so he could see firsthand how an election is conducted.

The letter was provided to Colorado Politics by the Secretary of State's office. Hanks had not yet responded to a request seeking comment.

Hanks and four other members of the House Republican caucus requested the Secretary of State's office provide them with a "current and complete schedule of any and all software upgrades to the election systems of each county in the State of Colorado, to include the Dominion 5.13 upgrade," in a July 6 letter. "The willingness to trust our election process to government audits or to be assuaged by the mantra that Colorado is 'the Gold Standard' has clearly evaporated as indications of voting irregularities aggregate throughout our United States. The people of Colorado are the rightful owners of these elections, and their concerns regarding the legitimacy of the reported outcomes must not be disregarded or ignored."

In an undated response, Griswold sent a schedule of a “trusted build” update process, including the systems updates that have already taken place and those that are upcoming, but with a caveat.

"We are seeing a rising tide of threats to election officials nationally – stoked by former and current elected officials who are undermining confidence in elections by asserting that the 2020 election was riddled with irregularities, without any proof to support that assertion, all for their own political gain," the response stated. "The Department of Homeland Security, Cybersecurity and Infrastructure Security Agency, FBI, US Cyber Command, as well as the Director of National Intelligence, Attorney General William Barr, DHS Secretary Chad Wolf, and numerous U.S. Attorneys have examined the 2020 election and come to the same conclusion: it was secure."

The letter, signed by Griswold, Grantham and Pueblo County Clerk and Recorder Gilbert Ortiz, asked the lawmakers to be careful about what they do with that information, warning that misuse could add to the growing threats against election officials. 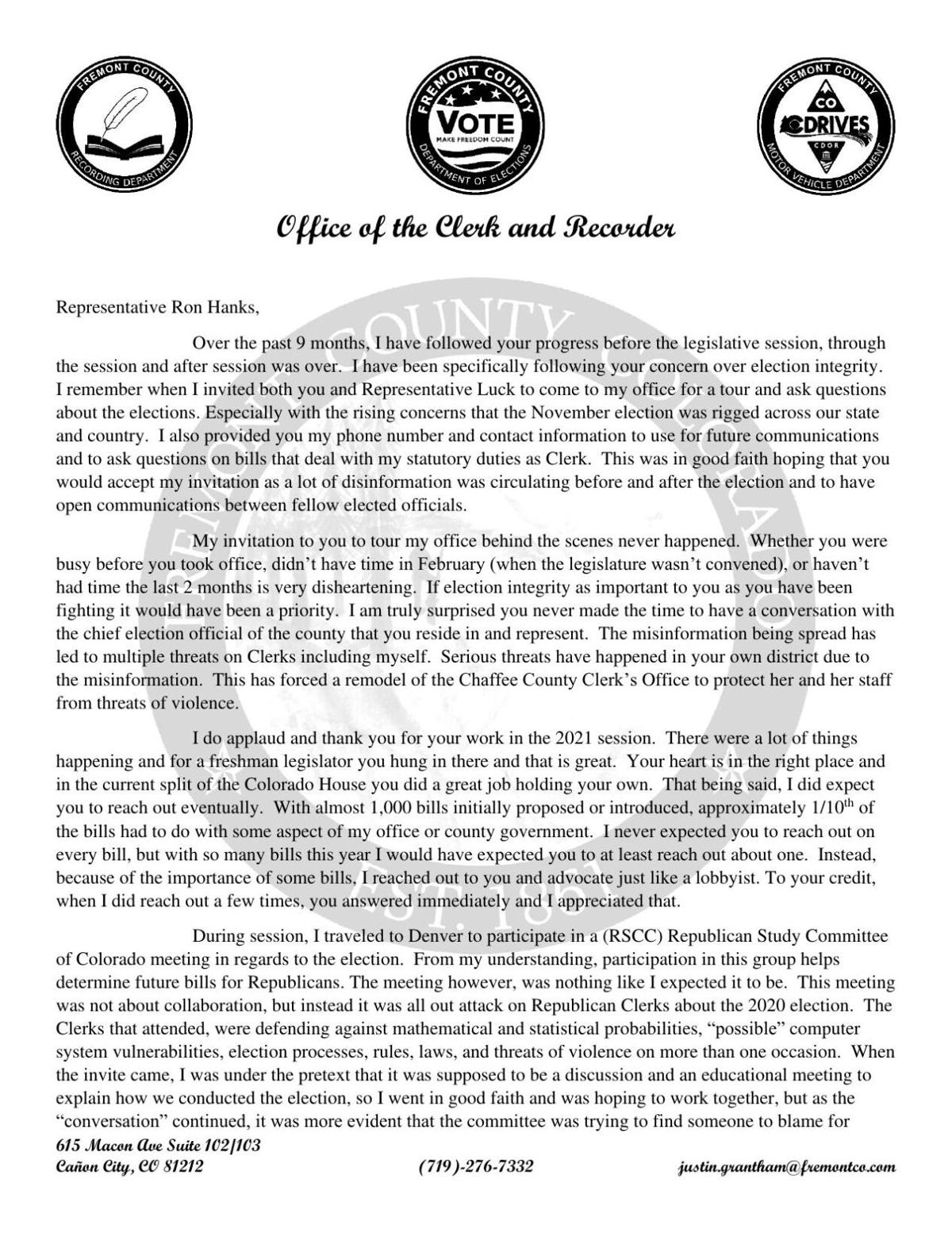 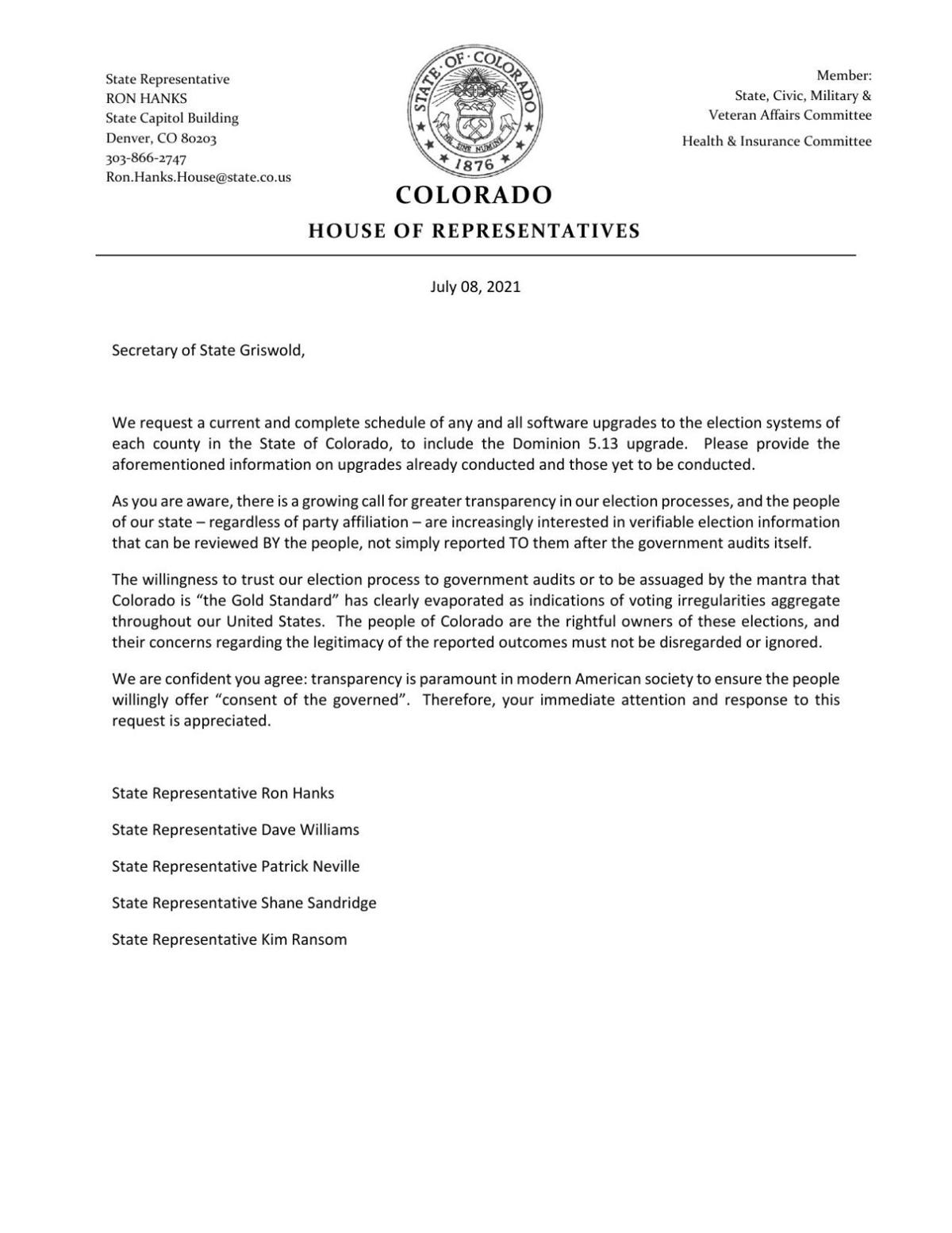 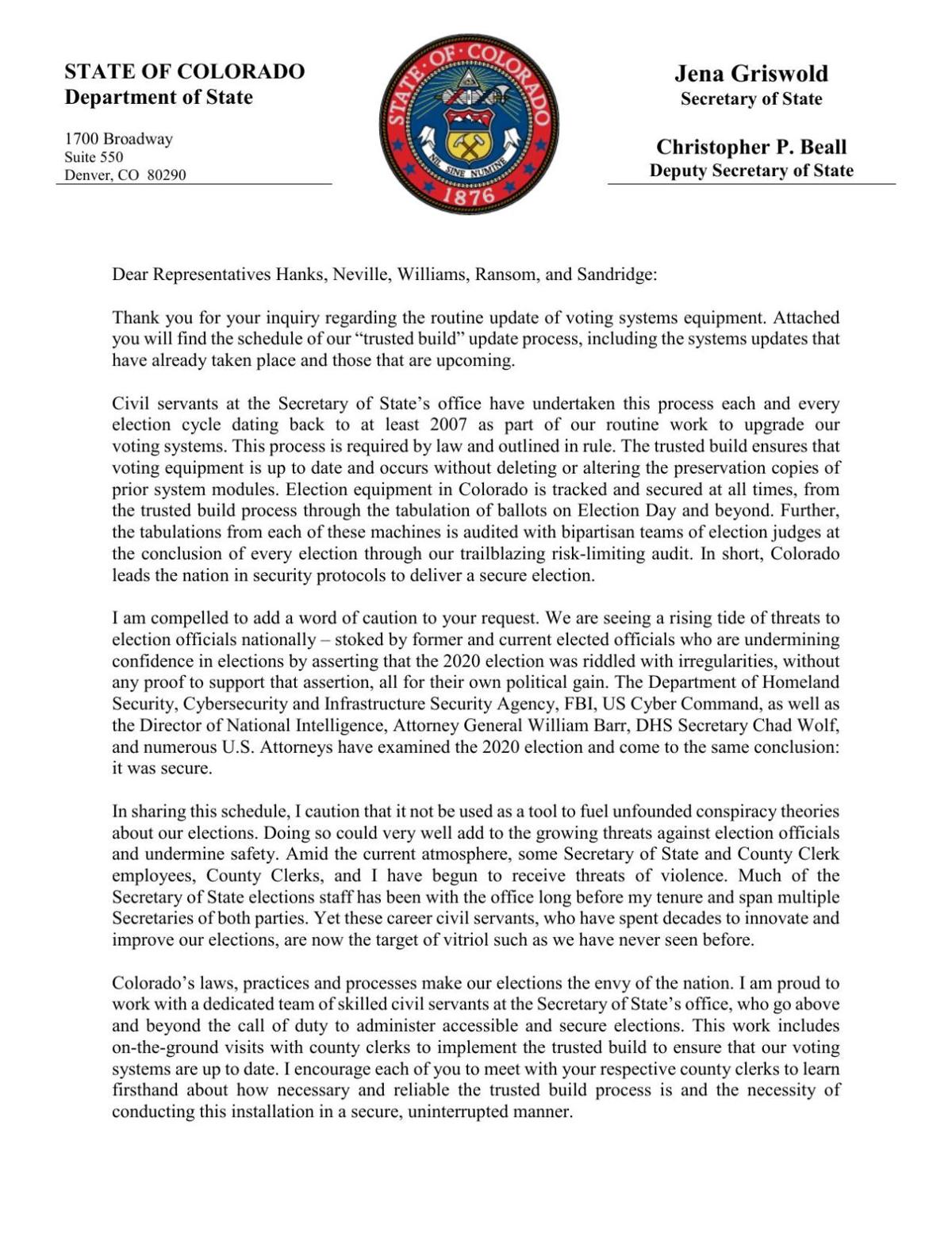 "The integrity of these components cannot be established," the secretary of state said at a press conference in Denver. "I have determined it is necessary to take further action."