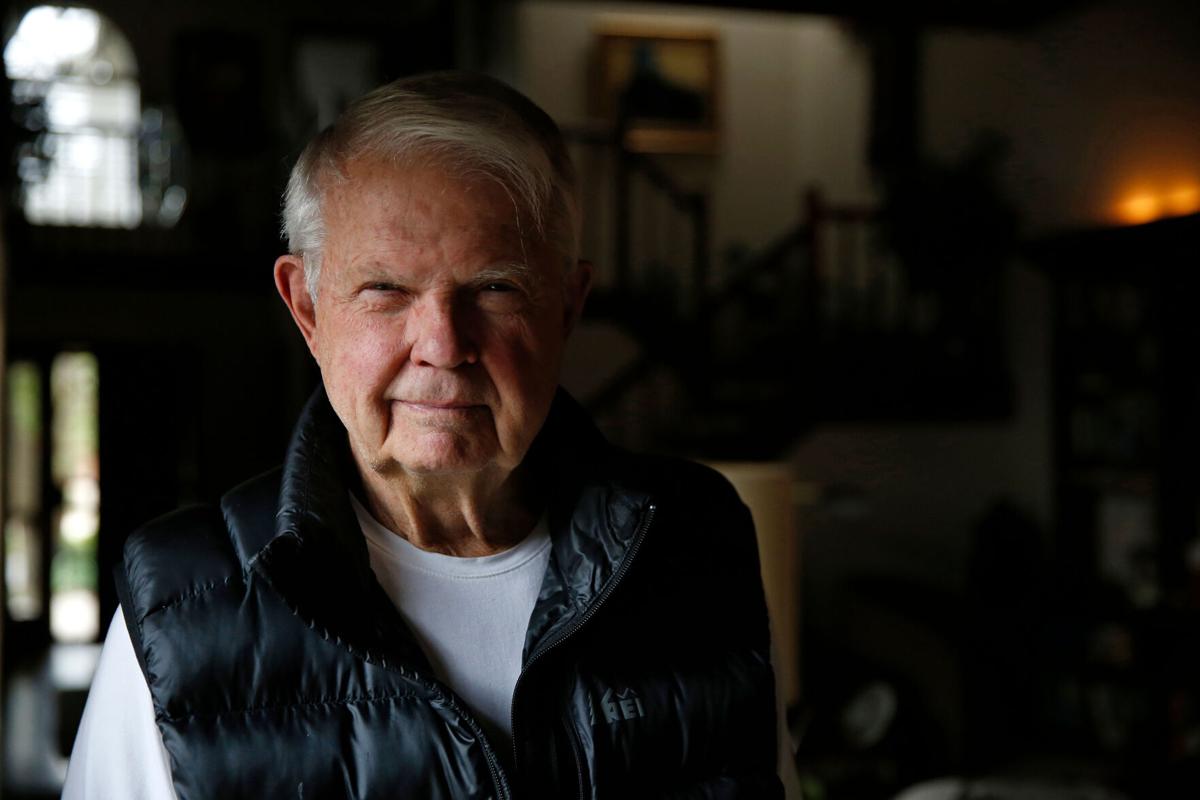 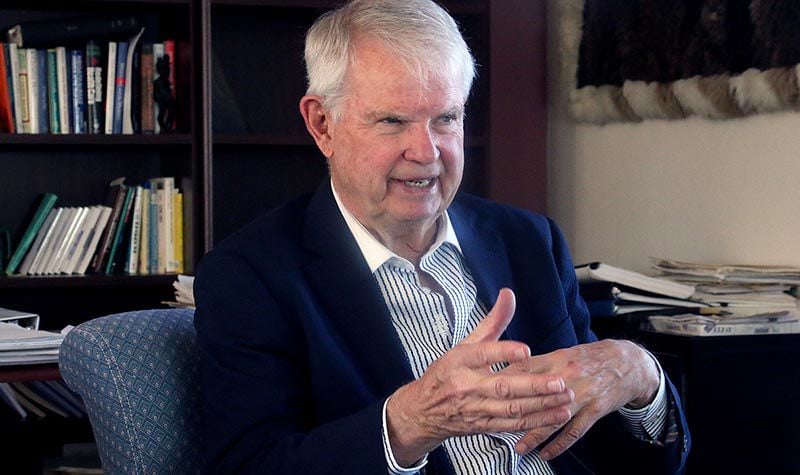 Dick Lamm, the governor known widely for turning a cold shoulder to the 1976 Winter Olympics after the state won the rights and who later mounted a presidential campaign, died Thursday evening. He was 85.

He is survived by his wife, Dottie, a former newspaper columnist, author and U.S. Senate candidate, and two children, Heather Lamm and Scott Lamm.

Dottie Lamm announced the death on Friday "with great sadness, but also gratitude for a life well lived and in service to his beloved Colorado" in a statement.

"He would have turned 86 next Tuesday but passed away yesterday evening surrounded by his family, following complications from a pulmonary embolism earlier in the week."

Details on funeral arrangements are pending, she stated.

Lamm was the co-director of the University of Denver's Institute for Public Policy Studies in the Josef Korbel School of International Studies.

He came to Colorado in 1962 to set up shop as a lawyer and accountant, and to get closer to the skiing, hiking and mountaineering he adored. He taught law at the University of Denver and served in the Colorado House from 1966 to 1974, including three years as assistant minority leader.

Lamm won his first term by beating Republican incumbent John Vanderhoof, 54% to 46%. When he left office, Lamm was the longest-serving governor in Colorado history, though the feat was matched by his successor, Roy Romer, before the state enacted a two-term limit.

He supported legalized abortion and was an early advocate for environmental causes. He was the author of six books and chaired the Western Governors’ Association for a term.

Lamm rose in politics as an unorthodox Democrat propelled by celebrity friends such as the late John Denver, who campaigned at his side. Lamm had tried, and failed, to make singer's 1972 hit "Rocky Mountain High" the official state song to replace "Where the Columbines Grow," the state song since 1915. (In 2007, the legislature made both tunes the state songs.)

C-SPAN: "The Life and Career of Richard Lamm"

In 1992, he lost in the primary for a U.S. Senate seat against then-Democrat Ben Nighthorse Campbell to succeed Sen. Tim Wirth, after Wirth chose not to seek another term. His wife would lose to Campbell, then a Republican, in 1998.

Perot was making his second bid for the White House, after his first run in 1992 siphoned away votes from incumbent Republican George H.W. Bush to give Bill Clinton the victory. Lamm entered the race after Perot initially said he would not run again.

Lamm rankled his own party by taking a tough stance on liberal immigration policies.

For a time, however, Lamm was in step with Democrats. The year he ran for president as a third-party candidate, Clinton signed the Illegal Immigration Reform and Immigrant Responsibility Act. The law sought to beef up border enforcement and exact higher penalties on undocumented residents who committed even minor crimes and made it harder for them to seek asylum and effectively created the U.S. deportation system.

In 2004, Lamm led a group of outsiders who sought, and failed, to win seats on the national board of the Sierra Club to steer the massive resources of the 750,000-member advocacy organization toward stemming illegal immigration. Lamm argued that population growth was an environmental concern.

Carl Pope, then the executive director of the Sierra Club, said Lamm's supporters were ''in bed with racists." Lamm acknowledged at the time that he had not been a member of the club in many years.

That year, in a speech at Colorado College in Colorado Springs, Lamm spoke to his position as an environmentalist.

"The go­-slow culture, the culture of sustainability, with fewer but equally passionate adherents, contends that the first culture is really making empty earth assumptions, believing that we continue to be an empty earth," he said.

"Rather, sustainability advocates believe consumption patterns can't be sustained," he continued. "They want to move now to stabilize U.S. population, and help the rest of the world to do likewise, and also reduce consumption, recycle, move to renewable energy. They believe that there can't be unlimited and endless consumption. They feel that we cannot and should not have a Colorado of 8 or 10 or 12 million people, or an America of 500 million people, living our consumptive lifestyles. They contend that we live at a hinge of history, where society must rewrite the entire script.

"If they are correct, then our basic assumptions about life and even the great religious traditions and our economy, and how we deal with poverty and create wealth, are really obsolete. So far, those that sing this song are failed prophets."

Lamm's positions on immigration and rhetorical flourishes on multiculturalism engendered criticism among colleagues on the left.

In 1981, Lamm was publicly criticized by fellow Democrats in the legislature, including future Denver Mayor Federico Peña, the House minority leader, for repealing the state’s Bilingual Bicultural Education Act. The program taught cultural understanding and parental involvement in public schools.

Of all his deeds in the public arena, leading the effort to reject the 1976 Olympic games was perhaps his most notable, marking the first time any place awarded the games had decided to renege.

Lamm acknowledged that he, as a legislator, had initially voted in support of bringing the Winter Olympics to Colorado. He had been a state lawmaker in 1972, serving on the bicameral, bipartisan budget-writing committee, when the games were first proposed.

He later saw them as a financial, growth and environmental train wreck and led the effort to resist, which propelled him into the governor's office, as Colorado voters rejected spending public money on the project.

The games moved to Innsbruck, Austria, instead.

"The voters made a decision, and I was convinced it was the right one,” Lamm told the late John Ensslin of Colorado Politics in 2019.

His work from decades before received renewed interest two years ago when voters in Denver overwhelmingly passed Initiative 302 to require a public vote before spending public money to mount a bid to host the Olympics.

Dick Lamm, foe of 1976 Winter Olympics, weighs in on Denver's passage of Initiative 302

Loquacious and unrestrained, Lamm was known for his brash enthusiasm and boundless energy for the most out-of-the-box ideas that often originated from the former lawyer-accountant's mind.

"Richard D. Lamm, the man of a thousand projects — author, teacher, TV reporter, lecturer, futurist, national prophet of gloom and doom, and, almost incidentally, governor of Colorado — has just thought up another project."

Lamm told Reid, "I was out running one morning, and all of a sudden … I really got this passionate desire to tell the story of the West and use music, like Aaron Copland's 'A Lincoln Portrait,' or 'Peter and the Wolf,' to offset it."

A weekly dive into the pages of Colorado Politics' predecessor, The Colorado Statesman, which started in 1898.

The clogged freeway to ski country costs Colorado's economy billions. Is there a solution ahead?

The mercurial former governor was sometimes friends and sometimes adversaries with many of those in his own party, as well as other parties. Dick Lamm himself was once a third-party governor, demonstrating his appeal across party lines.

Read all our coverage of former Gov. Dick Lamm in these links.

The memorial will be at the Wings Over the Rockies Museum in Denver's Lowry neighborhood beginning at 3:30 p.m. The doors will open at 3 p.m.

A memorial service with hundreds gathered at the Wings of the Rockies Museum in Lowry, followed by a jam-packed reception at the governor's mansion in Denver.