The draft public option bill has only been out for two days, but the campaign to persuade Coloradans (including lawmakers) one way or the other is well underway.

It includes a $1 million ad buy by the opposition and a letter-writing campaign by the proponents, which don’t have near the financial muscle but have something else: the ears of Democrats at the state Capitol.

The Colorado option bill is sponsored by Rep. Dylan Roberts, D-Eagle and Sen. Kerry Donovan, D-Vail. It gives the healthcare industry in Colorado two years to winnow down health insurance premiums in the individual market by 20%, beginning in 2022. If that fails, the state would move to a quasi-public option plan for both the individual and small group markets, which represent about 15% of all insured. That plan would include price controls that would result in those premium savings, according to proponents.

On Wednesday, that included a six-figure ad campaign in opposition to the draft public option bill released on Tuesday and as first reported by Colorado Politics.

“During this critical time, Coloradans deserve proven solutions that provide access to affordable, high-quality health coverage and care,” Mounsey said. “We should build on and improve what’s working where private coverage, Medicare and Medicaid work together – not start over by creating a one-size-fits-all new government health insurance system.”

Those who support the Colorado option counter that the campaign is from a playbook used by the industry since the days of the “Harry and Louise” ads during the 1990s that were developed to oppose the Clinton administration health plan.

Wendell Potter is president of the Philadelphia-based Center for Health & Democracy. He’s also a former communications director for healthcare industry giants Cigna and Humana, and he helped devise some of those opposition campaigns.

He walked away from all of that in 2008, becoming one of the nation’s most ardent supporters of health care reform, and now a proponent of Medicare for All, which is related to the public option concept.

Potter authored a letter that went to state lawmakers last month, warning them not to be fooled by the efforts of those opposed to the public option, including identifying the Partnership by name.

“...the insurance industry and its front groups will besiege you and your constituents with a tidal wave of propaganda," Potter wrote. "The Colorado Option would help the people of Colorado save on medical bills, but the private insurers would lose massive profits if it came to pass. So the insurance companies will dump an unholy amount of cash in the state to wage a disinformation campaign, in an attempt to turn people against the idea.”

Potter also referenced a December study paid for by the Partnership on behalf of Colorado's Health Care Future. The study, conducted by FTI Consulting, claims the Colorado option will affect more than just the individual market targeted by the bill.

"A total of 22 Colorado hospitals are considered high-risk, with losses ranging from $1 million up to $16 million," the study said. "Of the 22 high-risk hospitals, nine … are in counties with racial and ethnic minority populations that are larger than the state average." The state option would impact 78% of all Colorado hospitals, the study claimed.

Potter told lawmakers that there is little, if any, information about the methodology the consultant used to claim that a Colorado option could lead to the closure of these hospitals, some of which are among the most expensive facilities in the state.

"You also will not find other information the Partnership is purposefully excluding that would show that the business practices of private insurers are perhaps the real (and biggest) threat to the state’s rural hospitals, and hospitals that serve racial and ethnic minority groups,” he said.

Potter told Colorado Politics that the playbook is a familiar one, because he helped write it. "These are talking points that I helped craft when I was in the industry, back in the Clinton years.”

The intent, he said, is to scare communities of color that the public option will be bad for them. “These plans are based on fear, uncertainty and doubt,” and they obscure important information, he said, including that Colorado hospitals have the highest profit margins in the country at 40%. That’s left out purposefully, he said.

Another portion of their campaign is to repeat the message as often as possible, and on the websites of trusted news media organizations, such as the Washington Post (Colorado’s Health Care Future has been running ads and sponsored content on Colorado Politics for more than a year). “They know which media to advertise on to reach influential folks and lawmakers,” Potter said.

The money for these campaigns comes from policyholders, Potter claimed, skimming revenue from “regular folks ... Coloradans are paying for this.”

Countering the effect of all this advertising will not be easy, Potter explained. Advocates for the public option will be outspent, unless there’s some foundations or organizations or individuals who step up and fund the effort to counter the misinformation.

“Rarely do you see advocates come even close to what the opposition spends. You have to be resourceful and cost effective as you can be” and that’s one of the reasons Potter decided to weigh in, he said.

“I wanted to issue a warning to the public and to the legislature, to speak the truth on these campaigns and who’s behind them. Hopefully with what I’m doing, it will inform advocates about what’s going on and how the opposition operates.”

Advocates will have to rely on social media, letters to the editor, op-eds, and collaboration with community organizations, he added.

“It’s an uneven playing field, but you have to stay in the game. I plan to assist those efforts as much as I possibly can."

Health Care Future's Mounsey said the letter and an accompanying fact sheet are efforts to create more questions than answers.

"The sponsors and their allies continue to distract from the negative consequences of the proposal that would disrupt Colorado's integrated health care system and threaten Coloradans' access to care, particularly during a critical time when patients are relying on our health care community," Mounsey said in a statement to Colorado Politics. "That's why Colorado's Health Care Future is educating policymakers with the facts about the unaffordable costs and negative consequences of this unsustainable proposed one-size-fits-all, government-controlled health insurance system. Lawmakers should slow down, consider the facts and fix what's broken in health care - not start over with a state-controlled government option." 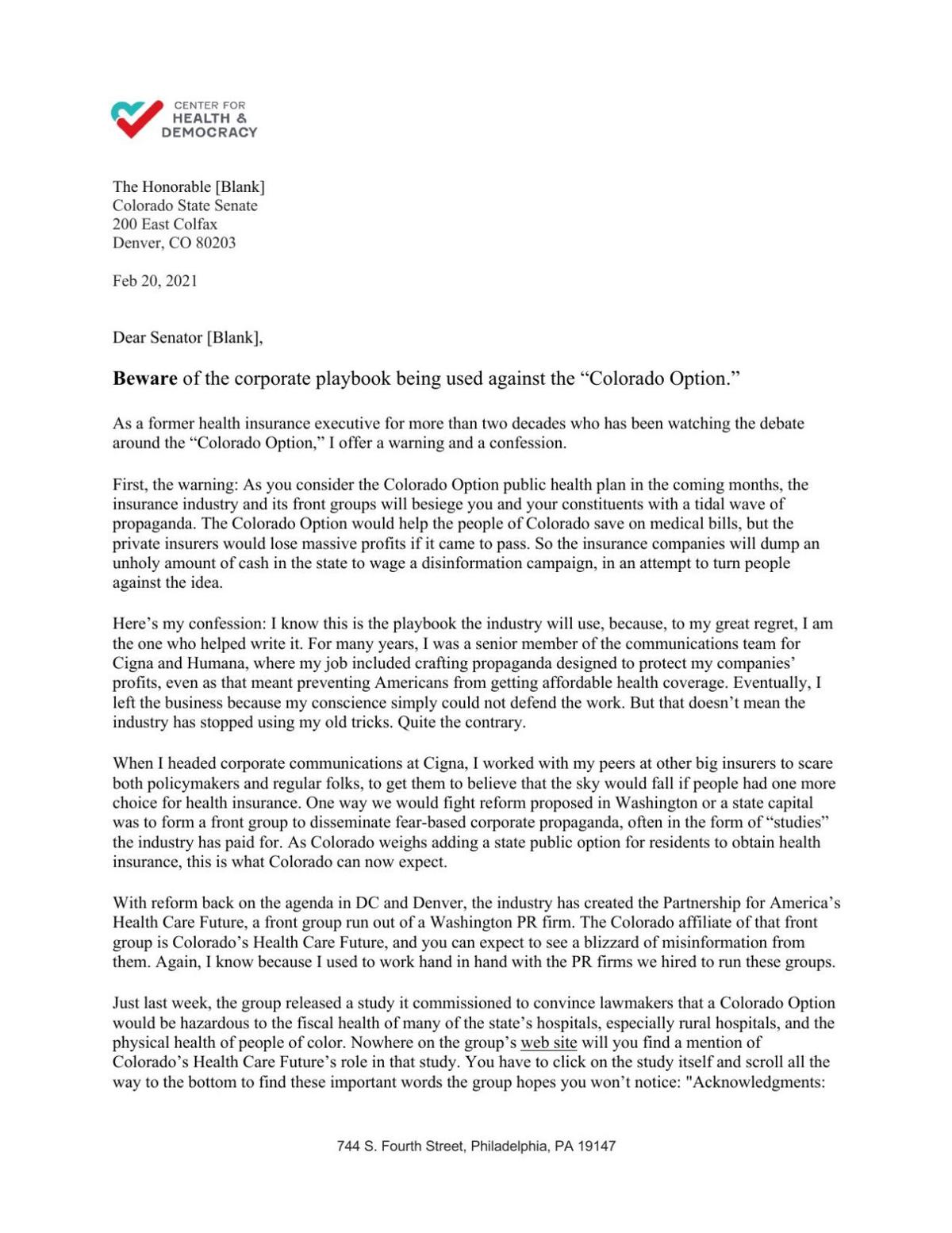 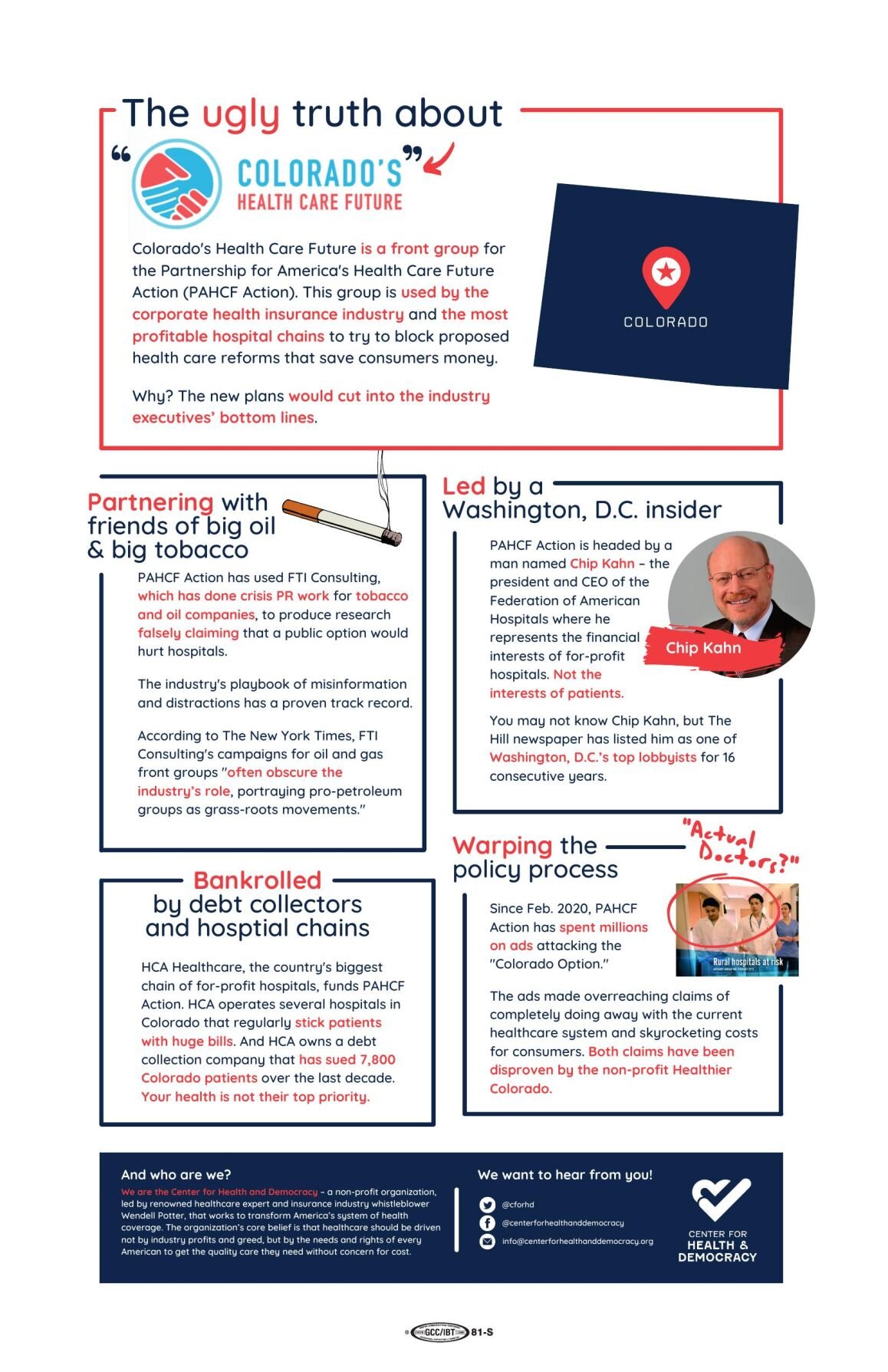 The responses to Colorado Politics ranged from full-throated support to equally full-throated opposition, with a view that stayed between.