This article has been updated with initial reaction from the Colorado Hospital Association and the advocacy organization Colorado's Health Care Future, funded by leaders in healthcare.

Colorado Politics has obtained a copy of the draft bill that could soon become the Colorado Option Health Benefit Plan, and it shows that the 2021 version is drastically different than the version presented in 2020.

Rep. Dylan Roberts, D-Eagle, and Sen. Kerry Donovan, D-Vail, will champion the bill through the General Assembly in the coming weeks.

The biggest difference in the bill is a provision that the healthcare industry will, at least for the next two years, be responsible for figuring out how to hit a target of a 20% reduction in health insurance premiums for the individual market, which is about 8% of those insured statewide.

It’s a minimum two-step process but with a longer timeline, Roberts told Colorado Politics. “We thought it was appropriate to push this out a bit” due to the pandemic and “the new world we live in,” he said. The sponsors also accepted a recommendation from the industry, made last year, to allow them time to achieve premium reductions on their own without government rules or mandates.

At the same time, she said "we have a long way to go to see if the draft really sets the market up for success in phase one, or if it seems to be a predetermined outcome that we will migrate to phase two. Obviously, that’s not our preference."

The healthcare industry figures out how to meet that goal, he said. They don’t have to if they don’t want to, but then the second step comes into play: a quasi-public health plan.

INSIGHTS | Health care price caps are a problem that can wait

The premium reduction has to be across all insurers statewide, Roberts explained. Just because someone lives in Denver County and the healthcare providers can meet that goal, but they can’t in Mesa County or on the Eastern Plains, for example, that’s not fair.

Everyone should have access to these lower premiums, and the industry has to come up with a statewide solution, Roberts said.

“We won’t tell them how to do it; they’ve told us repeatedly over the years that they know healthcare costs are a problem, but that they want to work on it on their own to address it," he said.

The question becomes how the plan will work if reductions are achieved in all but a few counties.

The lawmakers are working with stakeholders on how to evaluate it, Roberts said. “We don’t want to create a situation where one small county doesn’t do it” and everyone else does, which wouldn’t recognize the great work done everywhere else.

“We do need to have significant, if not complete compliance.” Roberts said the healthcare industry has been asked to provide what that would look like.

The base from which those premium reductions come from takes into account the benefit mandates adopted by the General Assembly over the last couple of years. At least 11 mandates have been sought, primarily by Democratic lawmakers, such as infertility treatments, lower cost insulin, breast cancer imaging, treatment for substance abuse, mental health wellness exams and requiring health insurers to spend more of the premiums on benefits.

Roberts said the governor has made it clear he is not in favor of more mandates that add to the cost of health insurance, but it hasn’t stopped Democrats from continuing to try it, including in 2021 (see: Senate Bill 16 and House Bill 1068).

The base year would include the mandates already required, and the health premium reductions would be from that level.

If, however, those premium reductions don’t take place, the second step is a quasi-public option that would begin in 2025.

The quasi-public plan would require a federal waiver, known as a 1332 waiver, a provision under the Affordable Care Act. Colorado already obtained one waiver that led to the reinsurance program. Roberts believes the state could get that waiver, in part because of the change in administration in the White House.

The quasi public plan would include some of the price controls that caused an uproar for the healthcare industry last year.

According to a Jan. 25 draft summary, the plan will reimburse providers according to a fee schedule set by the Division of Insurance and the Department of Healthcare Policy and Financing. While the plan would initially cover the individual market, Roberts said eventually it would also cover the small group market, in an attempt to provide savings for small business. That’s still only about 15% of the total health insurance market, he said.

“If you’re not on the individual market or you’re happy with your insurance, no matter what market, you don’t have to buy the Colorado option. No one is forced onto it,” he said.

Among the targets: every ZIP code must have at least two carriers offering the standardized plan, which is what the marketplace plan is called. If that cannot be achieved, that triggers the quasi-public option.

The standardized plan would be offered by insurers beginning Jan. 1, 2022, according to the draft. The plan would cover gold, silver and bronze-level plans (based on price) in the individual and small group market and would offer all essential health benefits.

The plan also would address racial health equity, including an effort to decrease racial health disparities in areas such as perinatal health-care coverage and “first-dollar, pre-deductible coverage for certain high-value services,” such as behavioral health.

By 2024, at least two health insurers must be available in every ZIP code in the state, the draft says.

The requirement for a 20% reduction is spread out over two years. By Jan. 1, 2025, carriers can include a premium rate increase that is no more than the maximum of the consumer price index plus one percentage point.

If those targets are not met, the Colorado option kicks in, governed by a nine-member board that will hire an executive director for the quasi-public plan.

The commissioner of insurance, along with the executive director of HCPF, would set a provider reimbursement fee schedule for the Colorado option plan that would be 20% less than the base set in 2021.

Colorado's Health Care Future spokesman Tyler Mounsey criticized the proposal. "No matter what the timeframe, the state government option would put politicians in control of Coloradans’ health care, could increase costs for Coloradans, and hurt patients’ access to quality care, services and coverage choices," he said in a statement. 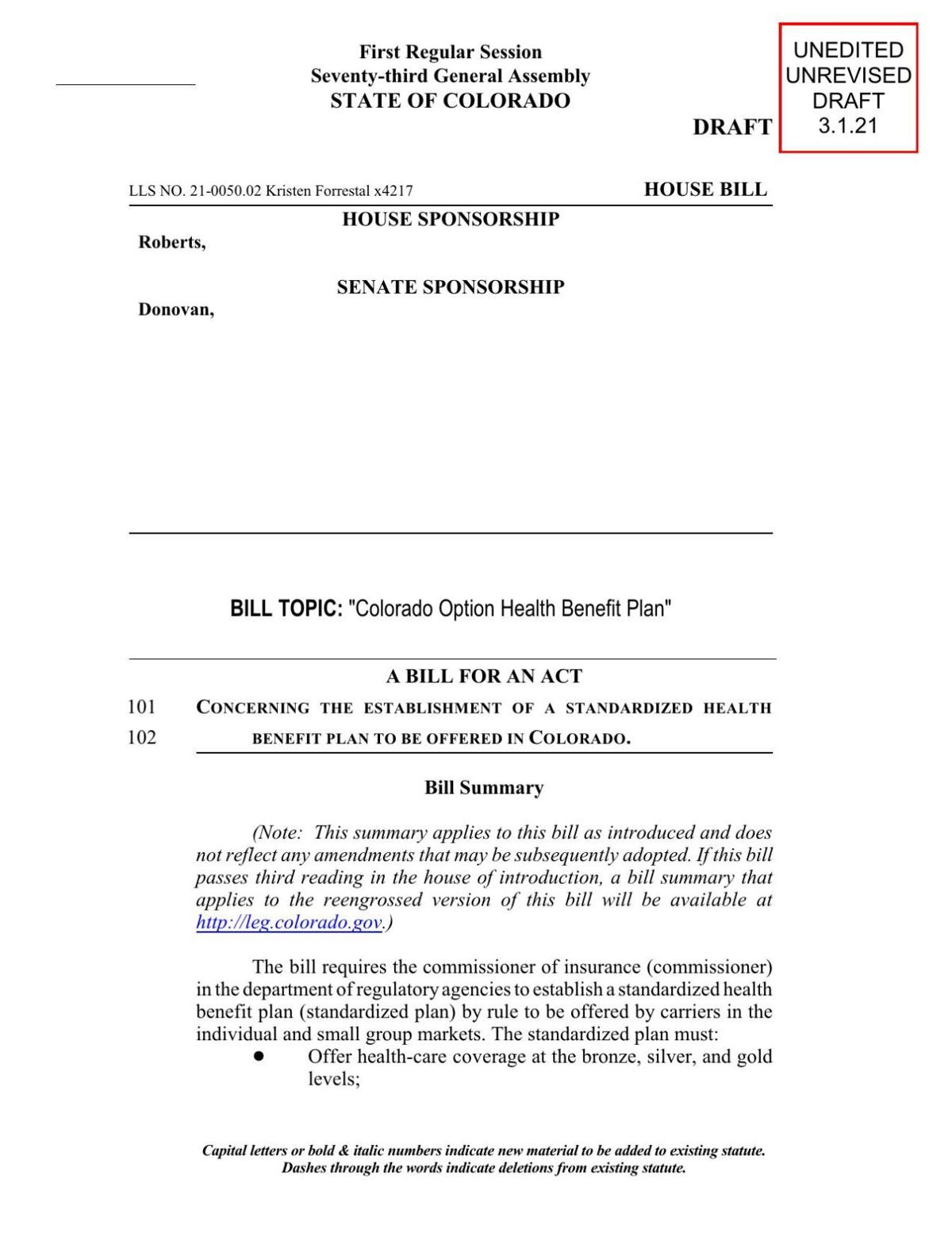 The long wait to argue over whether Colorado should get in the health insurance business officially ends Thursday at 11:15 a.m. when Democrati…

The responses to Colorado Politics ranged from full-throated support to equally full-throated opposition, with a view that stayed between.