The dustup started last month when Gov. Jared Polis appeared to call out the city for problems with homeless people or activists camping out near the Capitol and the governor's mansion in Denver as part of the civil unrest around the police-involved death of George Floyd in Minneapolis in May.

Polis, Hancock tiff on homeless is an unanswered question

Whether the blame Gov. Jared Polis leveled at the city of Denver over homelessness Thursday …

“They are welcome to come onto our property and remove tents,” Polis said on July 23. "They're not only welcome, I would encourage them to do so."

Polis added in his remarks last month. "I thought Denver voters voted for the camping ban, but it seems like maybe they didn't. I don't follow Denver politics."

Colorado Politics attempted to measure the depth of the fissure over homelessness, but neither the mayor or governor were willing to discuss it at the time.

Behind the scenes, however, conversations and presentations evidently were taking place. 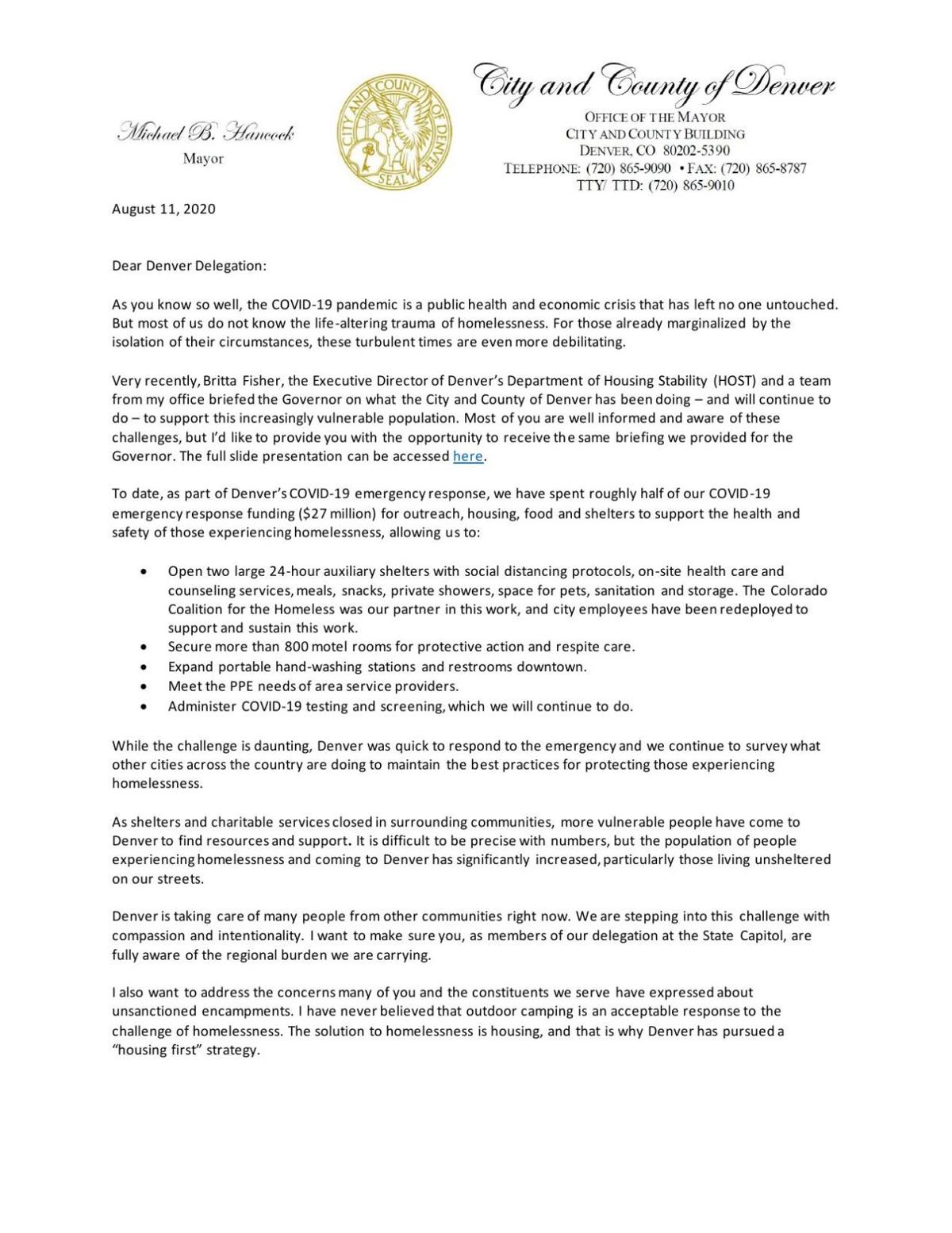 "Prior to the pandemic, Denver had already established a long history of extensive and innovative efforts to alleviate the suffering caused by homelessness and involuntary displacement," Hancock said in the letter to Denver legislators obtained by Colorado Politics. "Over the past 10 years, my administration has helped provide stable housing for 9,200 homeless individuals and families."

The letter states that Britta Fisher, executive director of Denver’s Department of Housing Stability, and others from the mayor's office recently briefed Polis on what Denver is doing to resolve the issue.

"Most of you are well informed and aware of these challenges, but I’d like to provide you with the opportunity to receive the same briefing we provided for the Governor," Hancock said in the letter.

The governor's office has maintained that the two leaders work together closely on issues.

"The Governor and the Mayor have been in contact about this issue for some time," Polis spokesman Conor Cahill said in an email Thursday evening. "The State, like the city, is incredibly focused on ending homelessness in Colorado and we appreciate the collaboration with Denver and other cities and acknowledge the hard work ahead."

In his letter, Hancock listed steps the city has taken to address homelessness, including:

Hancock noted that he has endorsed a ballot initiative for a 0.25% sales tax increase this November to raise $40 million, which he said would expand housing, including capital, rental assistance and services, as well as expanding shelters, case management and quality-of-life issues for people in need.

"Finally, as I put it in the State of the City address, there is an uncomfortable truth about the challenge of homelessness in our society," Hancock wrote to the Denver lawmakers. "It’s the same truth underlying the challenge of income inequality, a hollowed-out middle class, an alarming disparity in access to opportunity, and the challenges of mental health and poverty.

"These issues underpin homelessness in America, and their resolution cries out for a coordinated national, state and regional response."

On July 15, Denver Mayor Michael Hancock will have three years left in office, sealing the end of the first year of his third and final term — one that’s collided with a national civil rights movement, a global pandemic and a crushing economic crisis.

As an 8 p.m. curfew went into effect throughout Denver, a third straight night of confrontat…

"The federal government has completely failed our nation in preparing and making sure we have everything."

While Denver bans urban camping and struggles with the issue, Durango is struggling with where put a permanent homeless camp, the Durango Hera…

Denver Mayor Michael Hancock revealed on Facebook Saturday afternoon that a piece of city property in Five Points has potential for a managed campsite for homeless people.