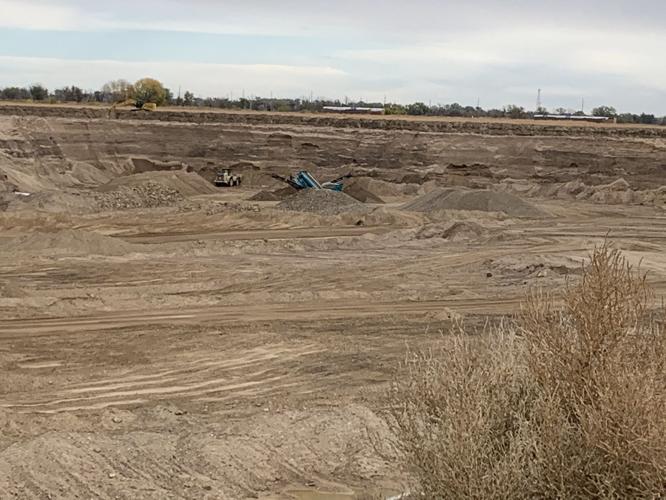 The land shown here is part of the 80-acre gravel pit in Lamar. The Colorado Department of Revenue declared a conservation easement adjacent to the pit as worthless.

The development "Judy's Dream Lane" sits adjacent to land donated for a conservation easement that the Department of Revenue said is worthless. Video courtesy Jim Butcher.

The land shown here is part of the 80-acre gravel pit in Lamar. The Colorado Department of Revenue declared a conservation easement adjacent to the pit as worthless.

The development "Judy's Dream Lane" sits adjacent to land donated for a conservation easement that the Department of Revenue said is worthless. Video courtesy Jim Butcher.

Another stab at restoring tax credits to hundreds of ranchers and farmers who were deprived of both their tax credits and clear title to their land is underway at the state Capitol, but many of those who spent years advocating for restoration of those credits are no longer showing up for the fight.

Senate Bill 119, sponsored by Sen. Cleave Simpson, R-Alamosa, and Sen. Faith Winter, D-Westminster, would repay the tax credits to people denied those credits for conservation easements donated between 2000 and 2013.

Conservation easements are supposed to work like this. Landowners, often a farmer or rancher, will grant a portion of their land in an easement to a land trust or county to protect it from development – whether from oil and gas, wind farm, housing or just to preserve the land's natural beauty. The landowner, in return, gets a tax credit for up to 50% of the land's value, which can run in the hundreds of thousands of dollars. The tax credits come from the Colorado Department of Revenue, and the Internal Revenue Service also grants tax deductions. In the program's history, dating back to 2000, the IRS has never denied a single tax deduction tied to the conservation easement program.

That's not been the case for the state tax credits.

Out of the 4,000 easements granted between 2000 and 2013, about 800, or 20%, were rejected, sometimes years later, by the Department of Revenue, which claimed the land was worthless. That includes agricultural land adjacent to expensive housing developments in Logan and Pueblo counties, or land that could be developed into sought-after gravel pits in southeastern Colorado. Most of the easements denied were in southeastern Colorado. Once a tax credit is denied, the landowners must pay it back, with interest, and they don't get back clear title to their land so they could develop it for other purposes. Easements are in perpetuity.

The denial of tax credits, over the years, has led to bankruptcies, divorces and at least one suicide, according to a group of landowners that's been fighting for years for the tax credits.

The fight reached its zenith in 2021, when two bills on easements were in the works. One bill, backed by the land trusts, sought a bump in the tax credits to 90% of the land's appraised value. The second bill, backed by a working group formed in 2019, sought reparations. The bills were supposed to be on parallel tracks, intended to reach the governor's desk at the same time. But the land trust bill is the only one that made it to Polis. Sources told Colorado Politics he didn't want the reparations bill, which was never acted on by the House Appropriations Committee and died when the General Assembly adjourned the 2021 session.

The effect of that fight was apparent in the Senate Finance Committee on March 17, when only one person showed up to testify in favor of the bill. In the past, dozens would show up with the stories of how the program had ruined their lives and businesses.

Conservation easements are a way to promote the state's heritage, preserving land for agriculture and wildlife, Winter told the finance committee, adding the program maintains and saves family farms. But between Jan. 1, 2000 and Dec. 31, 2013, when the legislature took the program away from the Department of Revenue, many were denied tax credits. At the time, there were speculators who entered into easements to take advantage of the tax credits, although only one person was ever charged with fraud, out of the 4,000 easements denied.

The 2022 legislation requires the landowner to have entered into the agreement with good faith and held the land for at least three years, and the tax credit would equal the amount of the credit that could have been claimed for the donation based on the fair market value that was in effect at the time of the donation.

Winter, who has sponsored conservation easement bills going back to 2019, said the fiscal note, which the Department of Revenue estimated at $177.7 million for 4,500 landowners, is "artificially high" and doesn't take into account the guardrails placed on reparations in the bill. Under those provisions, three-quarters of those tax credits would be denied, she said.

The bill is opposed by the Polis administration, as evidenced by Aaron Welch, who runs the division of conservation at the Department of Regulatory Agencies. Welch disagreed with the timeline and the criteria for the tax credits, and added the bill doesn't include funding for the three employees who would evaluate the credits or authority for the division to charge fees. Welch also said the division would be limited in its authority to issue new tax credits, which would require that those seeking new easements would have to "get in line" behind those who were deprived of their tax credits in the past, since traditionally, there has been a cap of about $45 million per year for tax credits.

The Department of Revenue also opposes the bill, according to Amber Egbert. While the fiscal note, which was developed with information from the Department of Revenue, claims there are 4,500 landowners owed $177.7 million, she told the committee that most of those claims have been settled. The policy in this bill walks back years of efforts to arbitrate these issues, she said.

The bill found support from Melissa Daruna, executive director of Keep It Colorado, previously the Colorado Coalition of Land Trusts.

"We remain committed to finding a resolution" to this issue," Daruna said. "These landowners chose to donate their land over cash payments ... but the way it was resolved has failed landowners who have done a good deed for the public benefit."

Jillane Hixson, a resident of Lamar, is among the landowners deprived of tax credits. She said she had to take out a mortgage on her farm to repay the tax credits for land donated in 2003. The Department of Revenue waited until 2007 to reject her claim, and appeals continued until 2015.

"We were harmed tremendously (by this program)," she said, adding she will be paying on the mortgage that covered those tax credit repayments until 2035.

Hixson's land is near the Arkansas River, where there are hundreds of easements intended to protect gravel and water. Without those easements, there would be gravel pits from Pueblo to the Kansas state line, she said. One of the gravel pits that was developed on land adjacent to a denied easement now produces 140 semi-truckloads of gravel per day, she said.

Hixson also mentioned several others who still want their tax credits, including Jim and Judy Butcher of Pueblo, whose land overlooks the Arkansas River. Other lots near the Butchers' property sold for $100,000 per acre, but Hixson cited the Department of Revenue as saying the adjacent easement land was worthless.

"We landowners followed the law and followed the instructions," she said, adding that included meeting IRS standards and using state-certified appraisers and attorneys.

Hixson also disputed the claims by Egbert that most of the claims have been resolved, figuratively arguing the department held a gun to the landowners' heads to settle out of court.

"They made my life hell, and thousands like me," she said. "It's not resolved and it's not too complicated."

Grand County Commissioner Merrit Linke got caught up in the conservation easement debacle after his family donated an easement in 2008.

"We jumped through all the hoops but did it in good faith," Linke said.

The Department of Revenue contacted him in 2011, asking for more information, but heard nothing more until 2013, five years after the donation, he said. That's when they got a letter from the state denying the tax credits and demanding $168,000, he said. They didn't have the money, and his brother's wife, a teacher, had her wages garnished to pay part of the debt.

"Am I missing something in how these assessments and appraisals are being done so that they come up with a zero value?" he said.

Hixson replied that a state-certified appraiser once told her that "if you come up with zero, that's an error. Everything has a value."

"When you make a mistake, you make it right," Winter said at the hearing's conclusion.

The bill passed on a 5-0 vote and headed to the Senate Appropriations Committee.

Reparations for hundreds of landowners deprived of legally-obtained tax credits by the Department of Revenue went down in flames Monday night, when a House Republican put a "poison pill" amendment on Senate Bill 33.