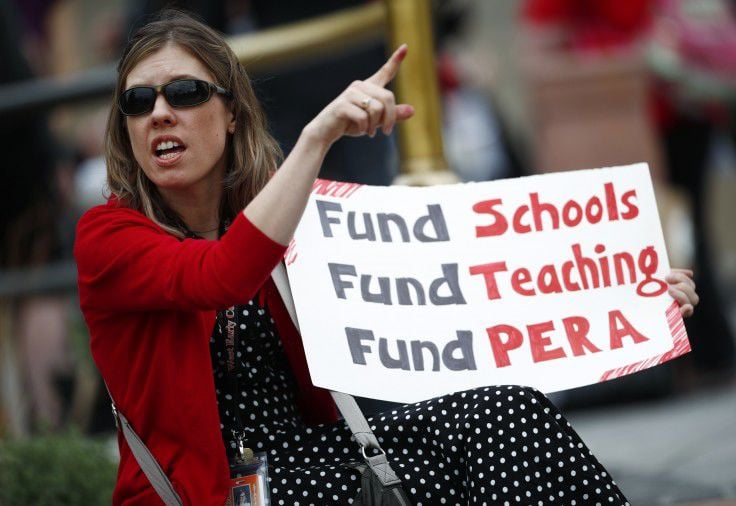 Kristen Rose, a seventh-grade English teacher at West Early College in Denver, takes part in a rally outside the state Capitol on April 16, 2018.

Kristen Rose, a seventh-grade English teacher at West Early College in Denver, takes part in a rally outside the state Capitol on April 16, 2018.

The Common Sense Institute released a study Friday with time-honored advice on money: invest it, don't just spend it.

The report, "Spend Now, Save Later: Impacts of $500M to PERA," looks at the benefits of putting a combination of money from the state budget surplus and federal stimulus directly into the state's Public Employees' Retirement Association, or PERA, which manages the retirement money for roughly 620,000 Coloradans.

A teacher earning the average salary of $54,000 would save $267 a year, according to the Common Sense Institute, which partnered on the study with the Pension Integrity Project at the libertarian-minded Reason Foundation and Secure Futures Colorado, a pension reform advocacy group.

THE PODIUM | State's windfall could shore up PERA

The combination of state and federal dollars is expected to top $5 billion in Colorado.

The one-time payment would be large enough to rollback a recent member contribution rate increase, they found.

“Colorado has a unique opportunity to make bold investments in its future," Chris Brown, CSI's vice president of policy and research, said in a statement. "State leaders can use the recent surge in both federal and state revenue, to save PERA member and Colorado taxpayers more than $870 million over the next decade.”

Brown cited the "clear long-term benefits" of the ongoing returns to teachers, other public employees, their employers and taxpayers "who can save real money every year, all while improving the financial outlook of the state’s pension fund."

In 2018, the legislature passed its second plan in eight years to shore up PERA’s unfunded liability, which at that time was projected at about $32 billion. Senate Bill 200 that session put $225 million into the pension plan and increased the retirement age for full benefits from 58 to 64 years old for employees hired after Jan. 1, 2020, in the school and state divisions, and required employees to contribute 2% more of their income, rolled out over three years.

Senate Bill 244 would provide health benefits to legislative aides, most of whom earn about $15 per hour, not enough to afford health insurance on their own. But in order to make them eligible for health benefits, Democrats had to do one other thing.

The all-important March revenue forecast from state economists said Friday that the worst of the recession is over. But the economic recovery has not hit low-wage workers and job losses in some sectors — hospitality and food service in particular — is still significant.

Tim Geitner: "Colorado spends a large portion of its budget on education, over $13 billion each year. The amount of money in education is important, but more important is how the money is spent. In Colorado, the billions of dollars we spend on K-12 education every year are not spent as effectively as they should be, and students and teachers are the ones that pay the price."

Colorado PERA posts $1.8B in investment losses for 2018

The former Greeley math teacher, Democratic state representative and member of the legislature's Joint Budget Committee doesn’t count success in media hits, unlike the others elected from border to border.