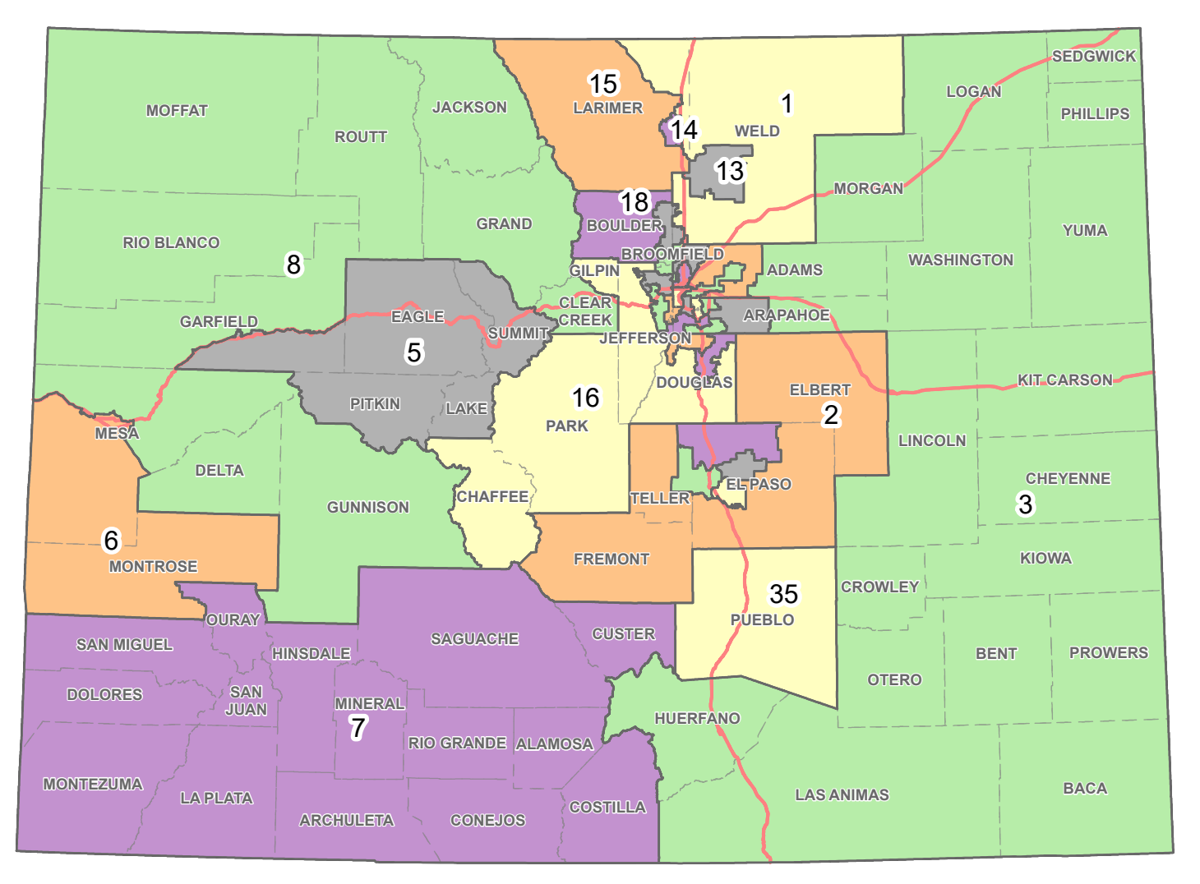 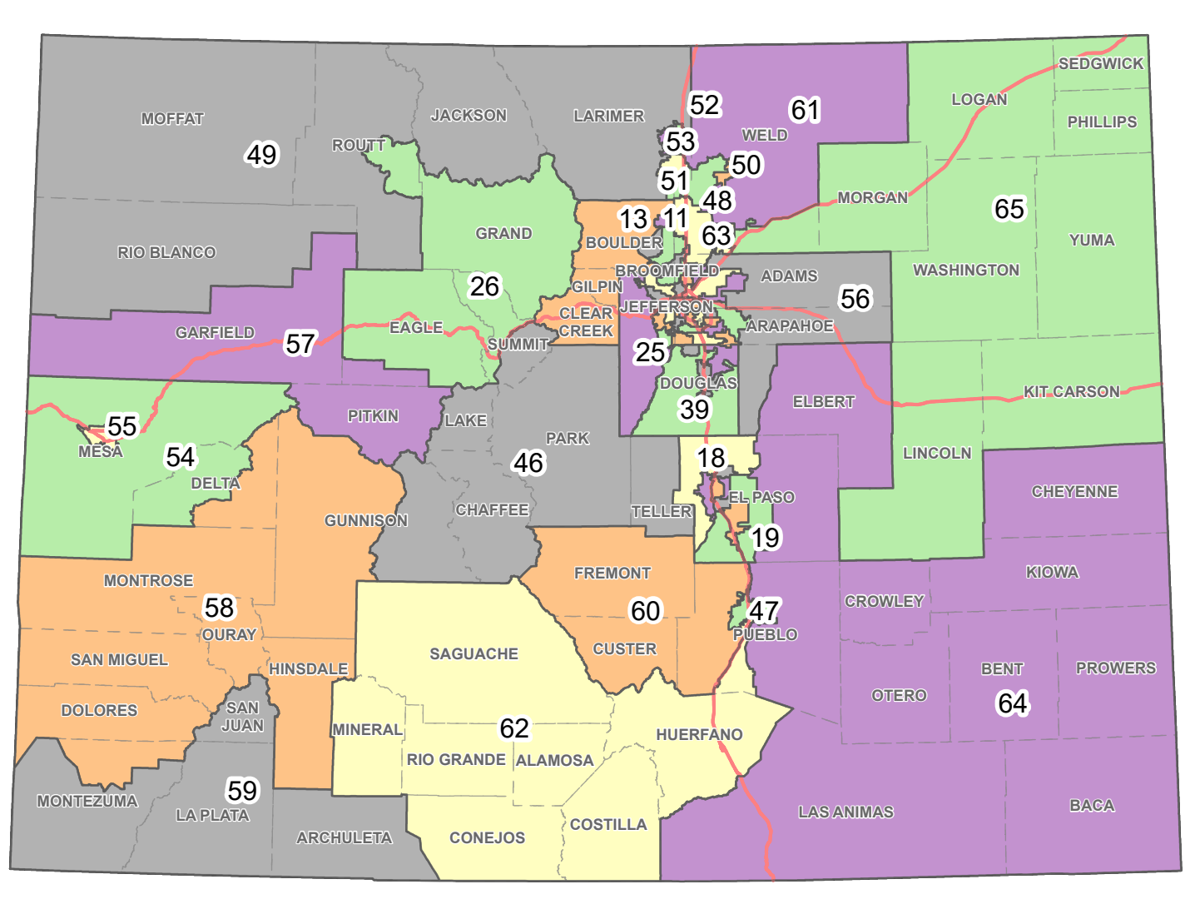 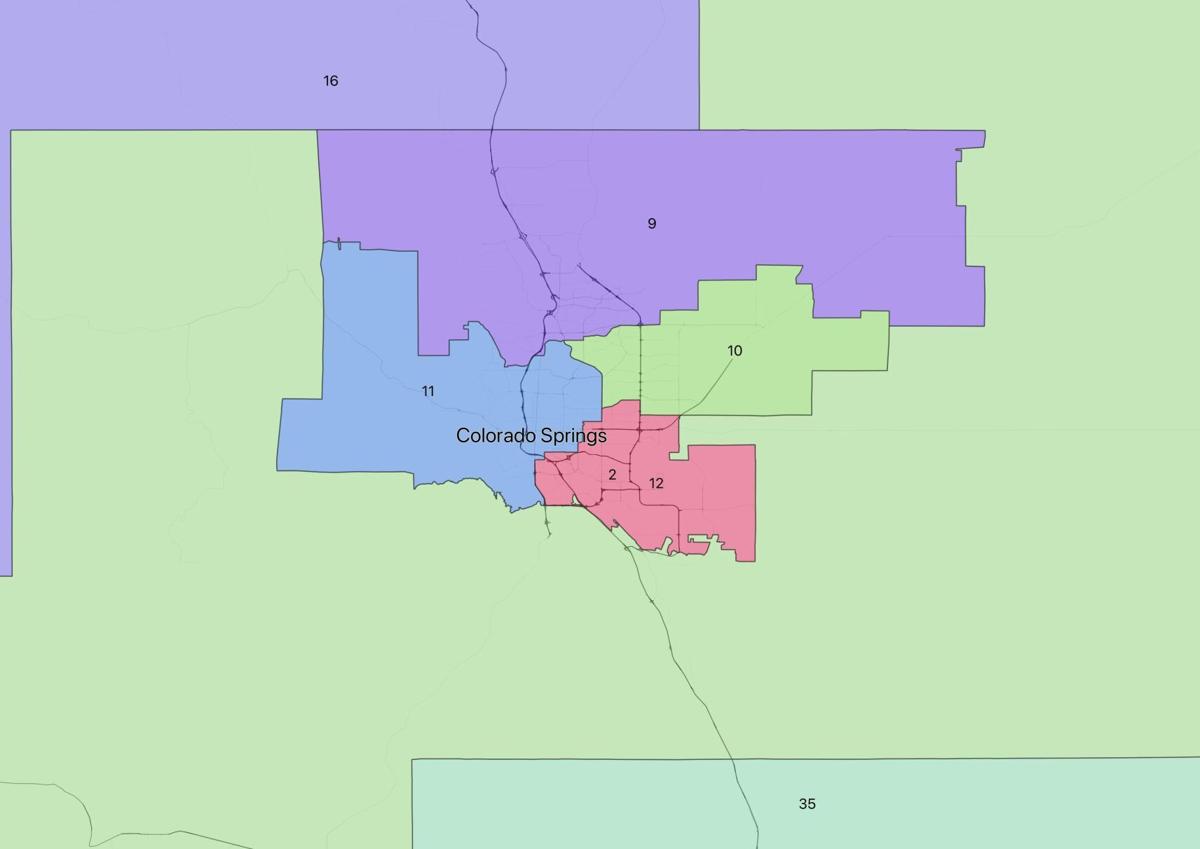 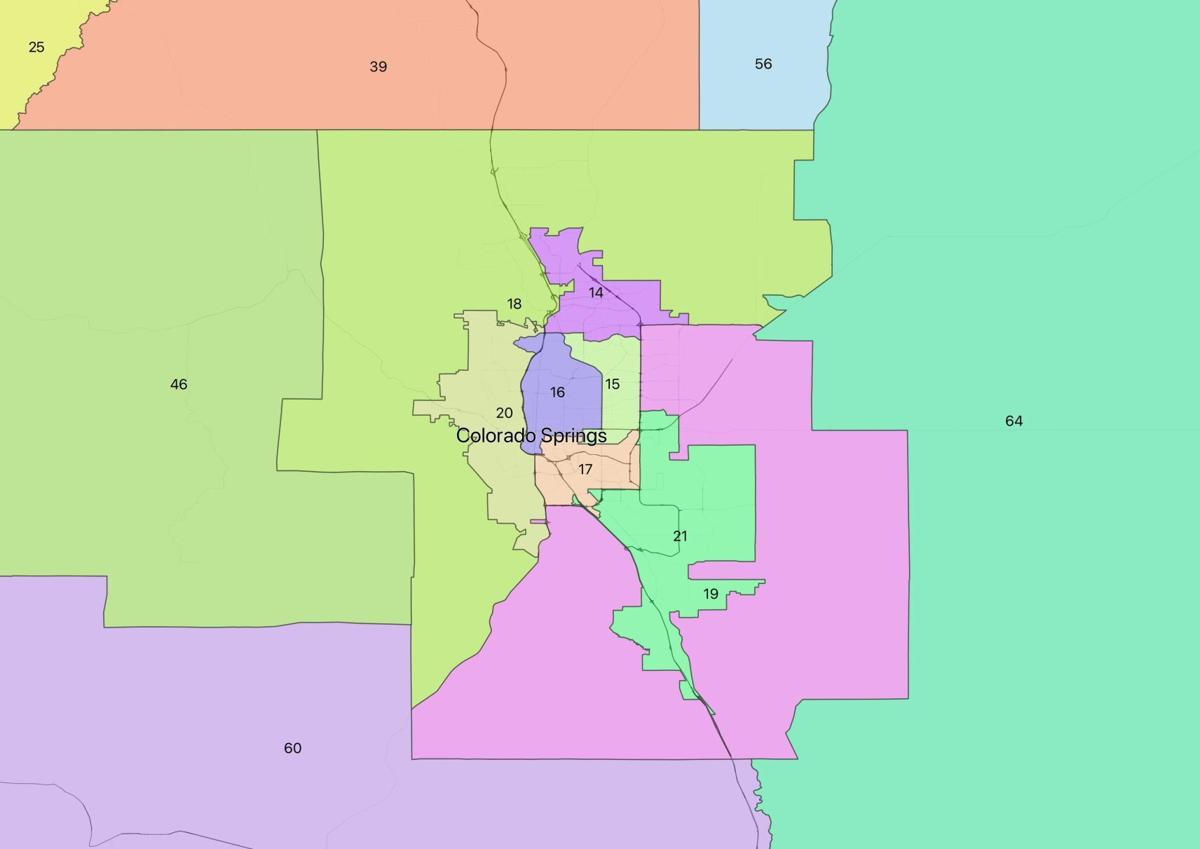 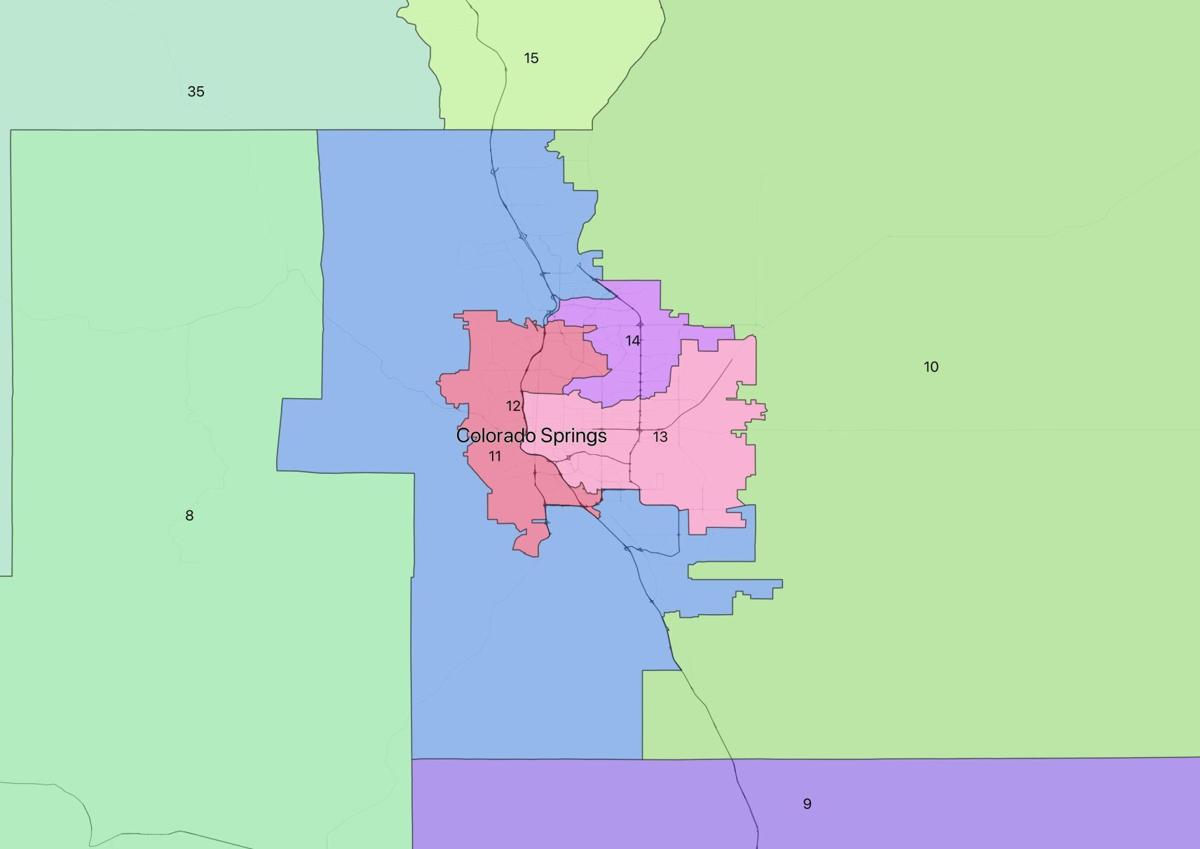 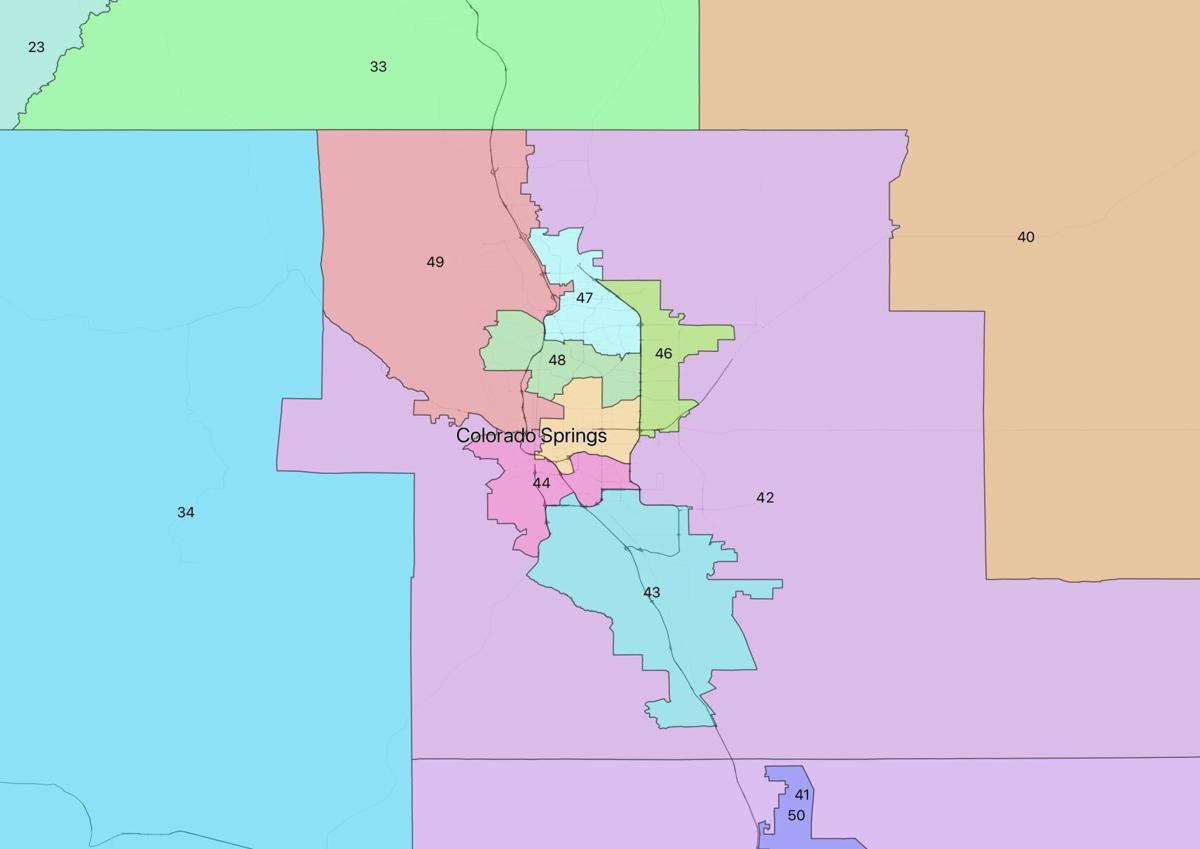 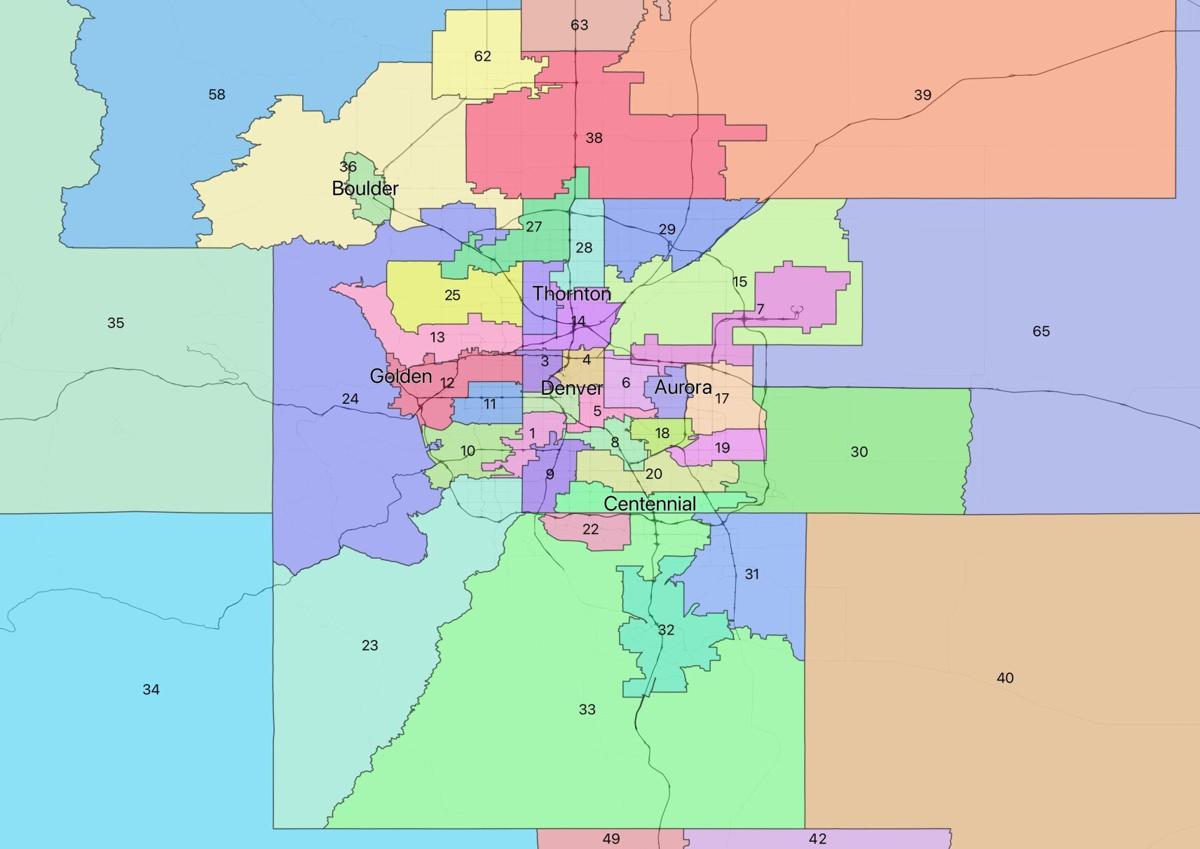 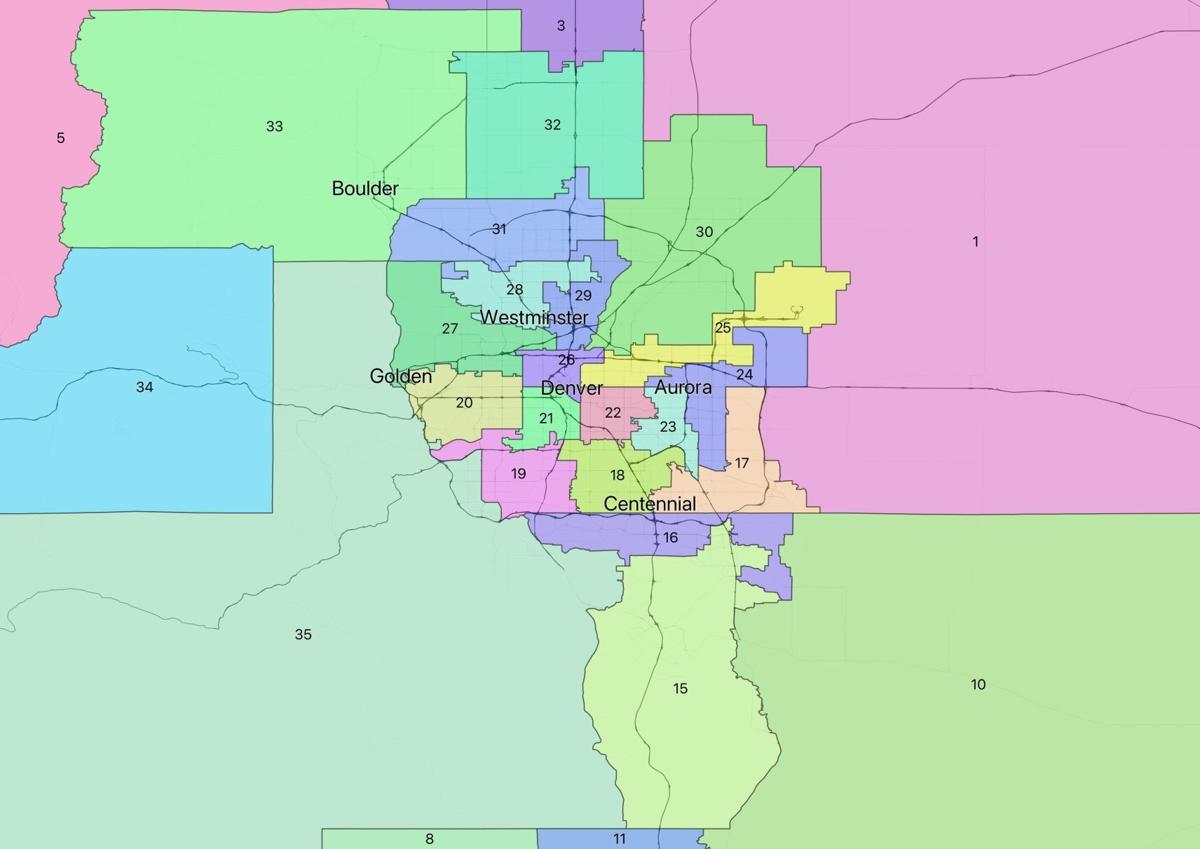 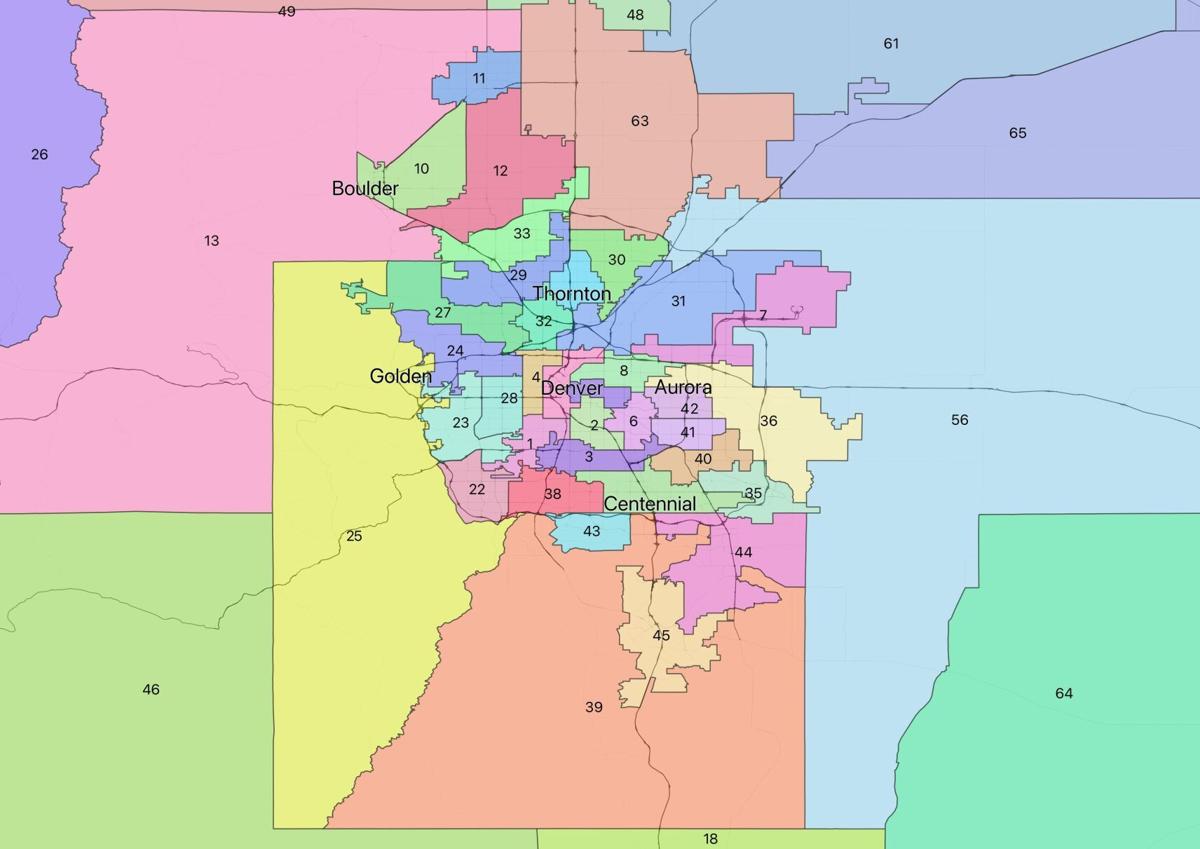 The new draft proposal for the House district map for the Denver area. 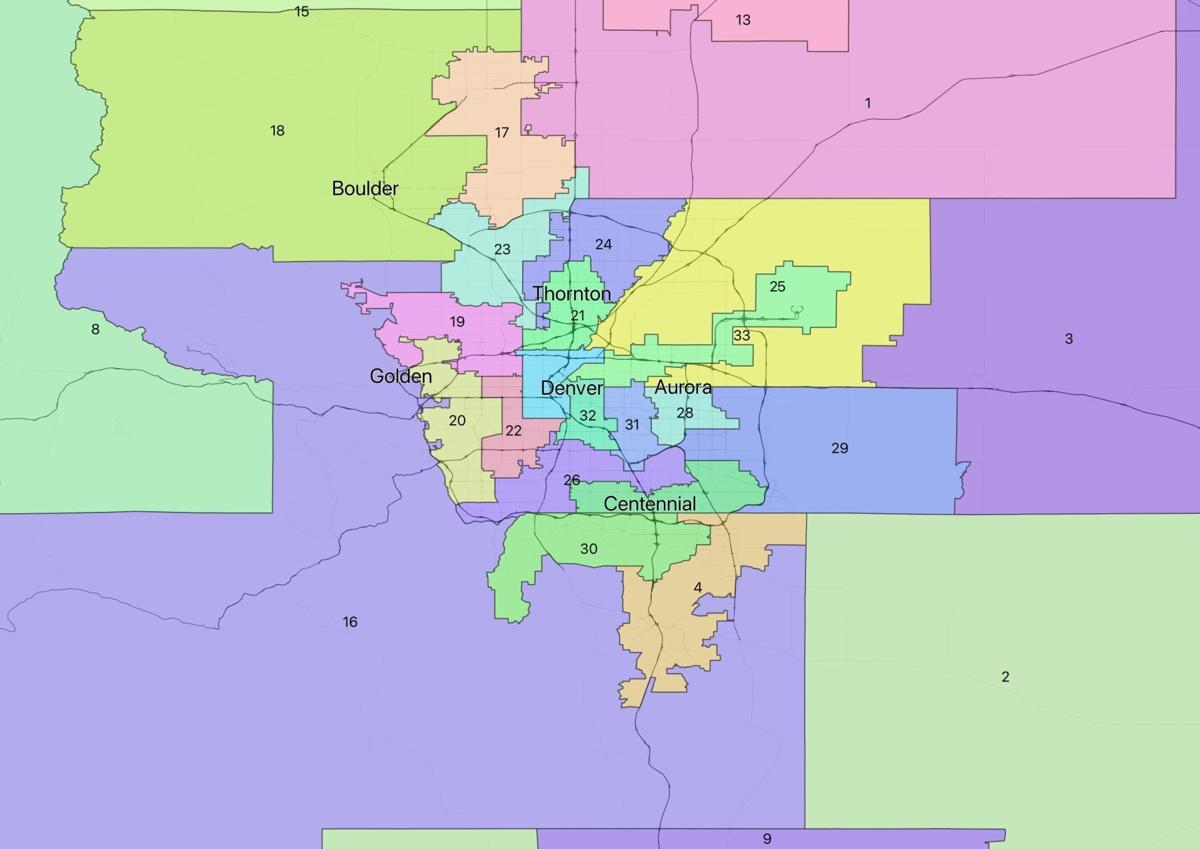 The new draft proposal for the Senate district map for the Denver area. 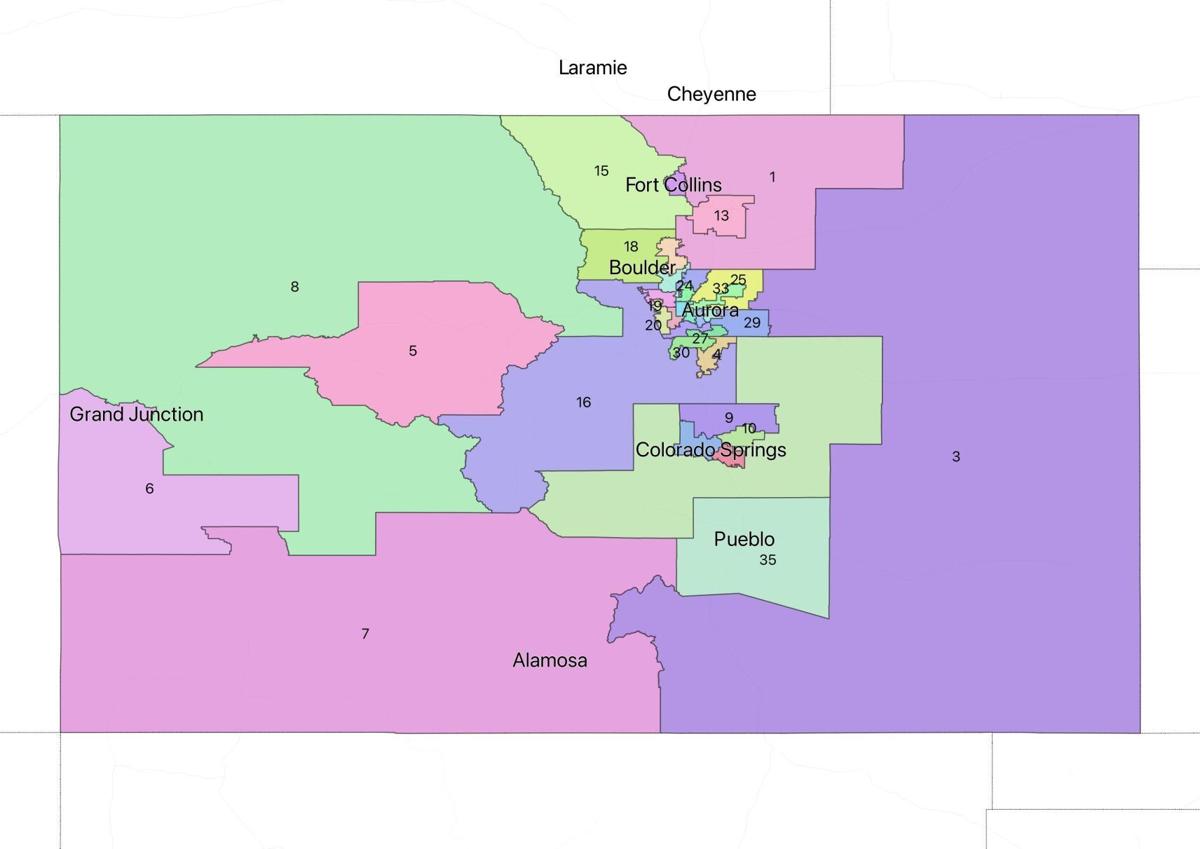 The new draft proposal for the Senate district map for Colorado. 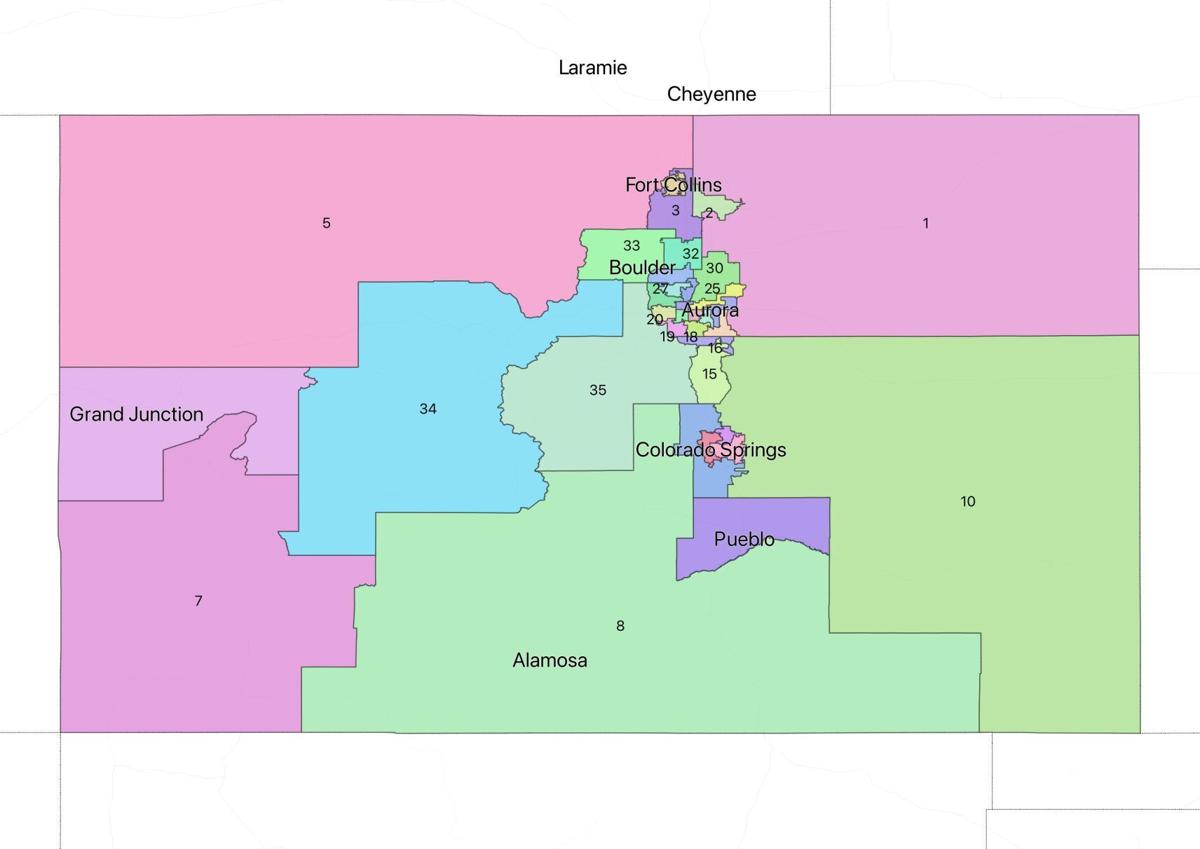 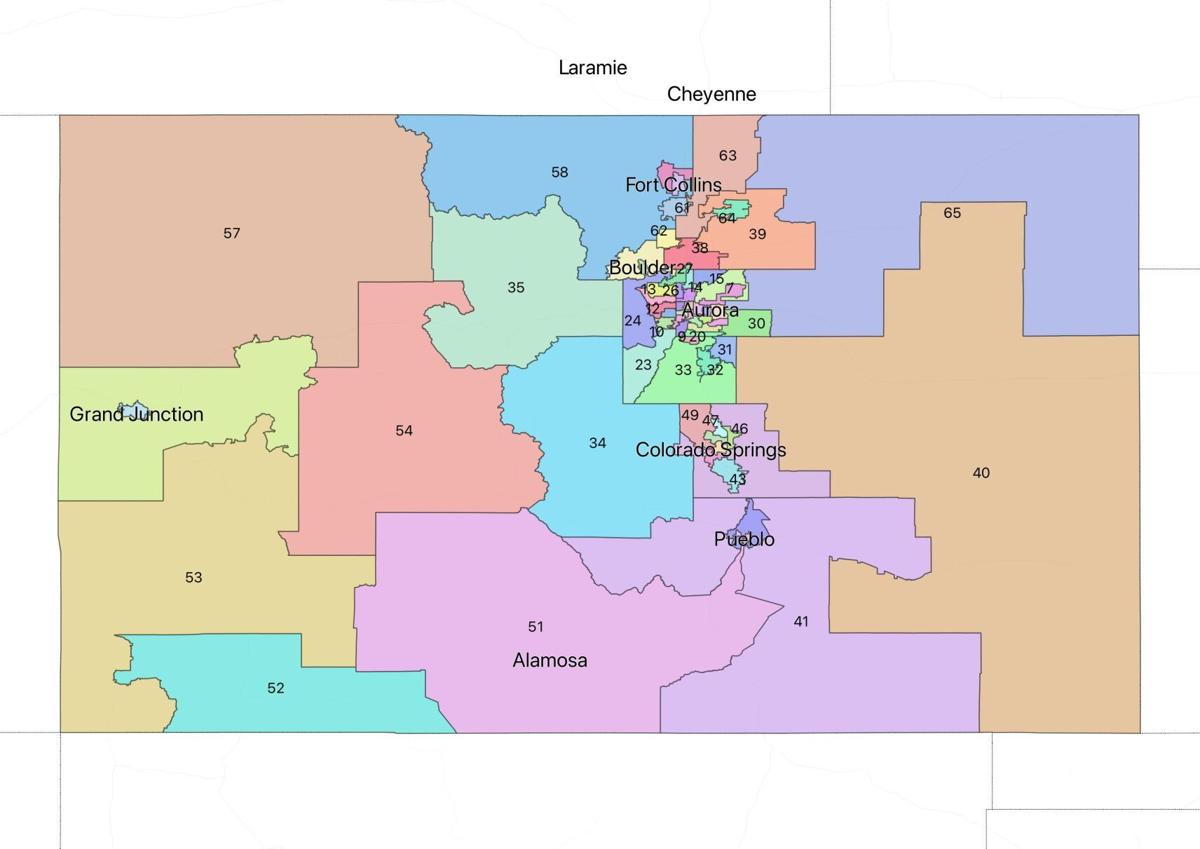 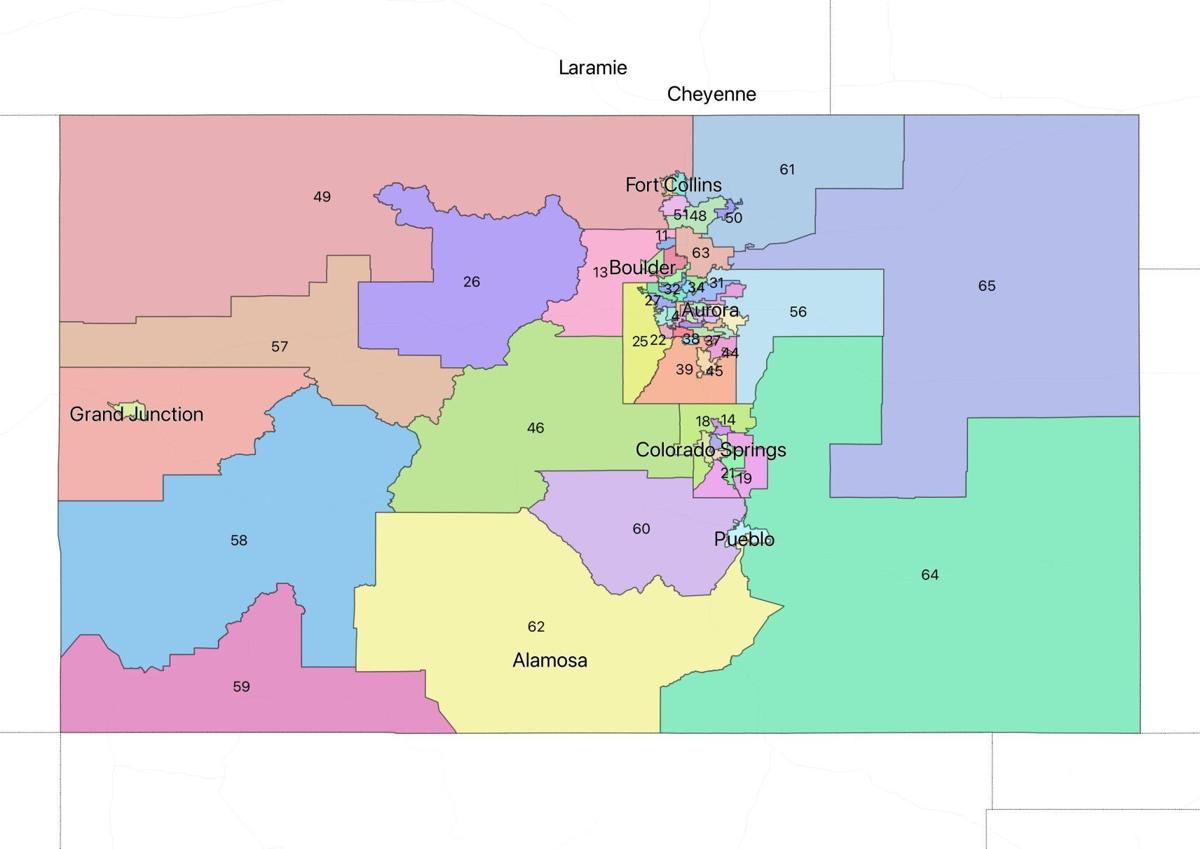 The new draft proposal for the House district map for Colorado.

The new draft proposal for the Senate district map for the Denver area.

The newest version of the maps also boost minority composition in some parts of the state, when compared to earlier versions of the maps drafted in June, based on preliminary data and prior to hearing recommendations from the individual Coloradans, along with advocacy organizations, during the commission’s statewide public input tour this summer.

The new draft maps released Monday will be further deliberated and modified in the coming weeks, before final maps are approved in October. But they are the first look at an official draft map that uses the delayed census data, and Democrats look to have a lock on majorities in both chambers going forward, based on past election results when aggregated into the newly drafted district plan.

Using the draft maps released today, in the 35-member Senate, Democrats would have carried 20 of the new districts by greater than 5-point margins, considering the two-party vote in eight recent statewide elections used by the commission to measure competitiveness.

Republicans, by the same metric, would have won 11 of the new districts.

The remaining four Senate districts fall in the competitive category, with neither party winning the benchmark elections by greater than 5 points.

Democrats currently hold a 20-15 majority in the Senate.

The newest draft of the Senate map would also create more districts where Hispanic residents make up enough of the population to have an influence on election outcomes, compared to the preliminary draft map produced in July. This is important because the federal Voting Rights Act, as well as the state constitution, requires the creation of districts to empower minority voters, where possible, and avoid diluting their voting strength.

Due to the staggered nature state Senate terms — and a constitutional prohibition on drawing boundaries to advantage or disadvantage an incumbent — more incumbent senators than usual have been drawn into the same districts, cutting short the legislative career of at least a handful of lawmakers who have yet to approach term limits.

In northern Jefferson County, state Sens. Rachel Zenzinger and Jessie Danielson, both Democrats, are drawn together, with only Zenzinger slated to remain in office after next year’s election. That’s because Danielson was first elected in 2018, but Zenzinger won a second four-year term last year, so situating them in the same district effectively blocks Danielson from running again, since Zenzinger will continue to hold office through 2024.

In addition, three other Democratic senators whose current terms expire next year have been drawn into districts represented by Republican senators who will be in office for another two years beyond that — a situation that drew a cry of foul from the state Democratic Party, whose spokesman noted that the staff map doesn’t erase any Republicans in a similar manner.

State Sen. Kerry Donovan, D-Vail, who faces term limits and is running for Congress, is drawn into the same sprawling Western Slope district as state Sen. Bob Rankin, R-Carbondale, who was elected to a full term last year and will serve through 2024.

In the 65-member House, 36 of the newly drawn districts would have been won by Democrats by greater than 5-point margins, using the same eight recent statewide races to measure competitiveness.

Republicans would have won 23 of the remaining seats, using the measure of competitiveness.

Six of the remaining districts would have been decided by closer margins, under 5 points, so would be considered competitive.

Like the Senate draft map released Monday, Hispanic composition would be increased in several districts, compared to the preliminary draft map.

Among the surprises from Monday’s maps: about half of Delta County is in the same House district as Mesa County, which is likely to rile Republicans who had asked that Delta and Mesa be kept separate due to communities of interest concerns.

House District 56, which has covered the rural portions of Adams and Arapahoe Counties, now includes a population center: Elizabeth, in Elbert County, with the county’s most populous neighborhoods drawn into the more rural district.

The new legislative maps released Monday by the staff of the independent redistricting commission show that if they were to be close to the final product, a handful of House and Senate districts that haven’t been competitive in the past could be, starting next year (using a five percentage point advantage for either political party as a competitive district threshold).

Take newly drafted House District 16 in Colorado Springs, currently represented by Republican Rep. Andy Pico, would have a 1.3% Democratic lean, based on averaging eight statewide election results from 2016, 2018 and 2020. Pico, however, won his 2020 contest by more than 13 percentage points, and the previous holder of that seat, now-Sen. Larry Liston, also a Republican, handily won his last House contest by more than 20 points.

House District 50, drafted in Greeley in the new map proposal, hasn’t been represented by a Republican since Rep. Dale Hall, who held the seat in the 2004-05 sessions. It’s been won by Democrats ever since.

But Monday’s map shows the district as competitive, favoring Democrats by only 3.4%, using the same election results average.

Among the most dramatic changes is the new draft’s Senate District 16, which currently is west Jefferson County, including its mountain communities, and Gilpin County. Sen. Tammy Story of Conifer won a tightly contested race for her seat in 2018. She will have her hands full if the new map shows little change between now and when it is finalized. The new draft map shows the district as competitive with 4.7% Republican lean. It also wouldn’t be largely west Jefferson County, either. The new draft district map has it including west Jeffco and the mountain towns, all of Park and Chaffee counties and a portion of Douglas County, all which lean Republican.

House District 22 in southern Jefferson County would also be considered competitive, with Republicans favored by 4.5%. It’s been on Democrats’ wish lists for several cycles and won by Republican Rep. Colin Larson in 2018 and 2020. But Larson is rumored to be interested in a run for Congress against U.S. Rep. Ed Perlmutter, D-Arvada. He hasn’t filed for re-election to his statehouse seat yet.

Monday’s draft map shows there is a second statehouse rep in the same District 22: Democratic Rep. Lisa Cutter of Littleton, whose current district — District 25 — includes the foothills communities west of C-470. Cutter was the first Democrat to ever win House District 25, close races in both 2018 and 2020.

House District 59, in southwestern Colorado, has been a ping-pong in some years, bouncing between Republican and Democratic candidates. Since 2015, it’s been represented by Democratic Rep. Barbara McLachlan, who heads for her fourth and final term in 2022. The new map shows it as competitive, with Democrats favored by a razor-thin 0.8%

Another competitive district is House District 35, in southeast Aurora. It’s split in half by E-470 with a small section just south of the Arapahoe-Douglas County lines. Its current House members are Republican Rep. Rod Bockenfeld of Watkins for the eastern part of the district, with the west portion covered by Democratic Rep. Tom Sullivan of Centennial. It’s rated as a 1% Democratic leaning district.

Senate District 11 is currently represented by Democratic Sen. Pete Lee. The district includes west Colorado Springs and Manitou Springs. But that district, as the new draft map shows, is now competitive. Lee is up for re-election in 2022.

Across town, Senate District 12, in southeastern Colorado Springs and currently represented by Sen. Bob Gardner, a Republican who is term limited in 2024, is also rated as competitive in the new map.

Finally, House District 38 is currently represented by Rep. David Ortiz, D-Littleton, who won in 2020 in a district that has been Republican for the past decade. It also is rated as competitive, favoring Democrats by 2.8%.

Lukewarm reception by partisans on both sides

“For the sake of fairness, the commission staff needs to understand the implications of drawing maps without taking into account the overlapping four-year terms of state senators. Coloradans voted for fair redistricting when they approved Amendment Z, and this map does not meet that goal.”

“We agree with the assessment provided by others in the media that this map will consistently elect a Democrat majority in the State House and State Senate,” Jackson said in a text message. “This process has a long way to go, and we hope the commission will work to generate more competitive districts."

Robert Johnson is a Denver resident. The U.S. Census Bureau counts him as living at a state prison. Colorado's redistricting commissioners must decide this week what to do with him and the thousands of others like him.

A public hearing of the state’s independent congressional redistricting commission in Colorado Springs on Thursday turned up only two speakers and wrapped up within an hour, a stark contrast to similar meetings that have drawn dozens of speakers and have lasted three hours or more.